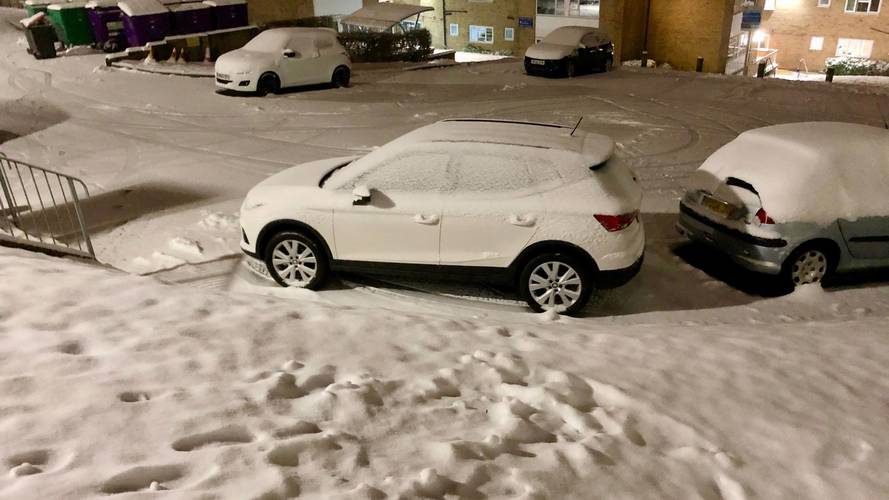 After a previous freak Arctic blast, the UK found itself once again covered in snow. It wasn’t anywhere near as bad as 'The Beast from the East’ that saw flights cancelled and public transport shut down, but there was enough of the white stuff to get us thinking about the front-wheel drive Arona. Would it be stranded in the car park while the all-wheel drive Hyundai Kona went about its business?

Not really. While all-wheel drive is an advantage, a good dose of common sense and a bit of caution was enough to keep the Seat out of harm’s way. Keeping a safe distance from the car ahead, avoiding slush at the side of the road and periodically checking how much grip you have by gently squeezing the brakes are all good practices. There was the occasional slippery moment on steep slopes, but other than that it acquitted itself well.

As the roads thawed it was business as usual for the Arona, meaning back to a regular motorway slog. One of the biggest surprises about this 93bhp isn’t that it can hold its own on the M3 - many 1.0-litre engines are pretty punchy these days - but how refined it is. Other than a bit of wind noise around the A-pillar, the Arona is very quiet for a small petrol at these speeds

Another positive is the real-world economy of 42mpg we’ve returned in mixed conditions. It’s not a million miles off the 57mpg official government figure and we know it can be improved upon — the Arona hasn’t been driven by a nun.

No misdemeanours to report? Well, a small one, but one that is become a bit irritating. Generally speaking the infotainment system and navigation is helpful and responsive, but it’s useless when it comes to traffic reports. Many of us program the nav on the way home in order to avoid big traffic snarl-ups on congested stretches of road, but the Arona will merrily lie to your face about current traffic conditions. We’ve experienced traffic where it says there’s none and empty roads when cars are reported to be stationary. Sometimes it’ll even have the cheek to announce that you are in traffic after 20 minutes of not moving!

Rant over, time to get back on the road.