Bigger, longer, stronger: that pretty much sums up the BMW 5 Series Touring, or ‘estate’, if you’re not up on your BMW speak. The new 5 Series Touring, like its saloon relation, has grown in dimensions over its predecessor, being longer and wider, while the boot capacity hasn’t just swelled in capacity in litres, but also in how much weight it can carry. 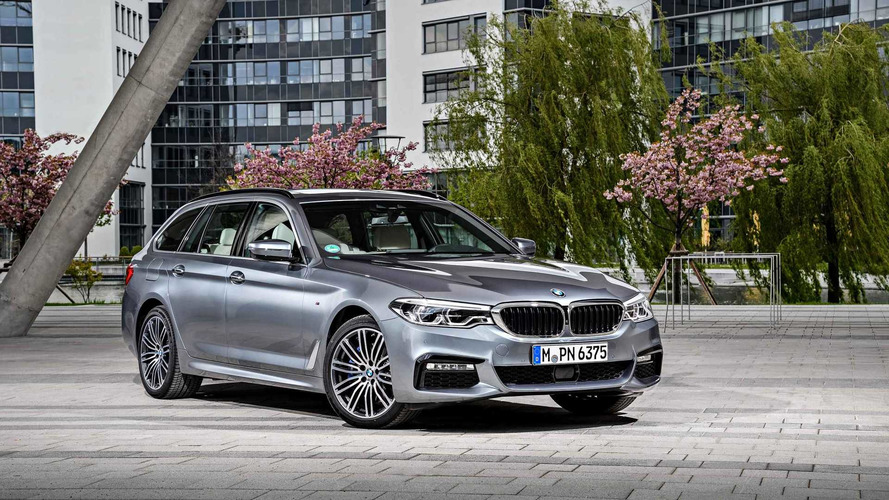 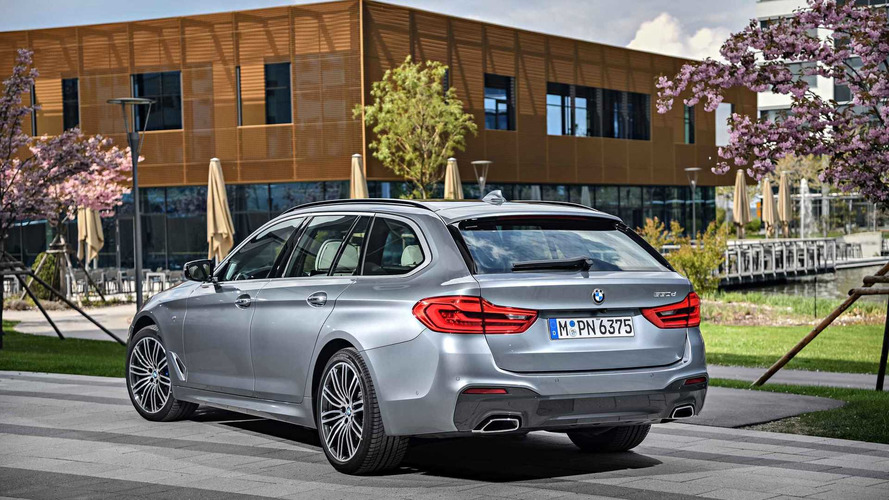 If you like numbers, that equates to a 36mm increase in length and 8mm in width, while the boot swallows 10 litres more at 570 litres with the seats up (or 1700 litres with them down - 30 more than before). Along with all that, self-levelling suspension at the rear allows 730kg in that bigger boot - up a not insignificant 120kg.

So this is a big car, though, as ever, it’s not able to swallow quite the load of its Mercedes-Benz E-Class rival. It does beat the Audi A6 Avant on outright carrying capacity, however, and we don't expect Jaguar’s new XF Sportbrake to offer more capacity than either. These are executive machines for the family, then, with all the technology, upmarket appeal and, in the case of the 5 Series here in particular, driver appeal.

The UK line-up will largely follow that of the saloon, so there’ll be a pair of diesels in 520d and 530d forms, and a pair of petrol choices in 530i and 540i guises, the more powerful of each offered with BMW’s xDrive four-wheel drive. BMW may also add the M550d xDrive model to top the diesel range, but as ever, all but a handful of 5 Series Touring sales in Britain will be of the 520d model, the car we’re focusing on here.

Ever since it was first launched back in 1991, the BMW 5 Series Touring has been the go-to estate car for the executive car buyer who’s got an eye on both practicality and style. The new generation builds on this. The Touring boot lengthens the roofline, BMW’s designers putting a rakish D-pillar at the back to keep it sporting and lithe despite the added space inside. It’s a good-looking, well-proportioned car, underlining that you don’t always have to opt for an SUV if you want a bigger, more useful vehicle. 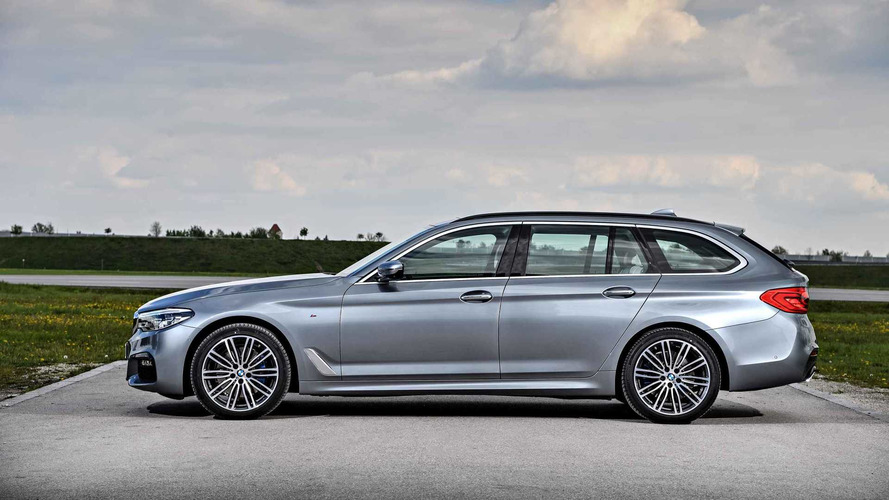 Like the 5 Series Saloon, the Touring is lighter than the old car, by as much as 100kg, which is impressive given the increase in size. Thank the use of aluminium in its structure, and the weight loss is not just to the benefit of economy, but performance and agility, too.

BMW says you can get three child seats across the rear bench, though the middle seat doesn’t have Isofix mounts. There’s plenty of head- and legroom back there, for when the kids are too big for those child seats, though foot room under the front seats is a bit tight and again, a third passenger won’t be as comfortable as the two alongside. 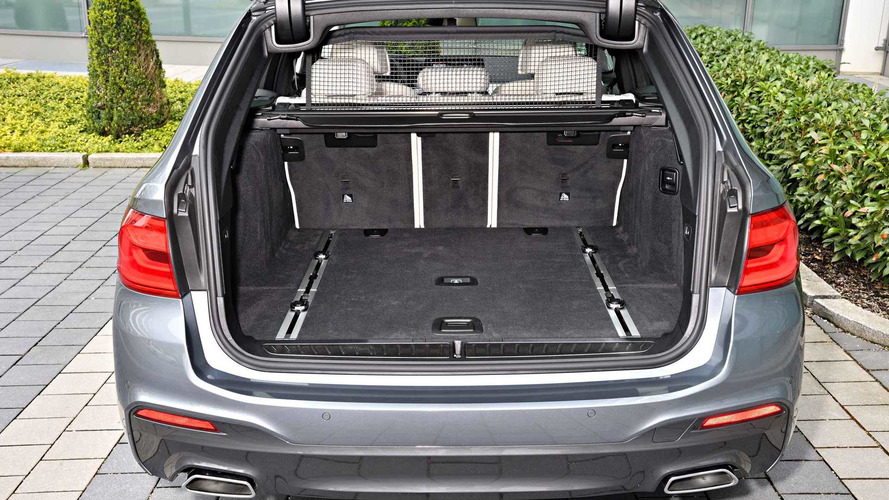 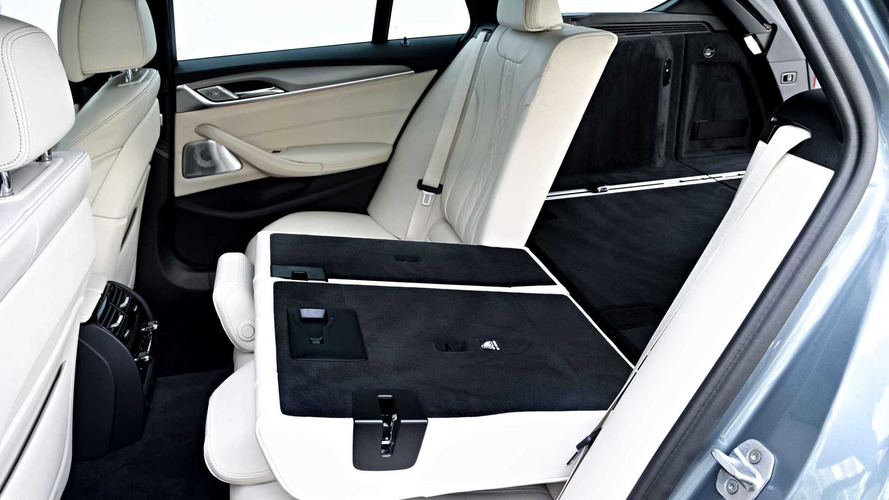 Those rear seats fold in a 40/20/40 split, while the boot itself is accessed either by the rear-window only, or the entire tailgate - the latter revealing a wide, low opening that is useful for loading. There’s the ability to open it with a wiggle of your foot under the bumper, too, so long as you’ve got the key on your person.

It might not offer the most spacious boot in the class, but BMW is clever with the details, so there’s under floor stowage for both the boot cover and luggage guard when you’ve got all those seats folded, while there are also plenty of optional load dividers, covers and compartments available optionally if you’re buying your 5 Touring with a particular purpose in mind.

Up front it’s all familiar 5 Series, which means a cabin that’s a bit fussy and fiddly in areas, the mix of switches, touch sensitive buttons, gesture control (depending on specification) and the iDrive device taking some learning. The technology count controlled by all that is high and the 5 is available with everything from the latest adaptive and active safety and autonomous driving equipment, to cutting edge connectivity and it's even possible to option a remote parking device if you want it.

The BMW 5 Series has always been the driver’s choice in this class, and adding a bigger boot to the rear does nothing to impact on that. Neither should you think that all those 520d drivers are getting the short straw, as the 5’s exemplary sophistication and fine agility are evident even when sampled with the smallest, most efficient diesel offering. Indeed, overlooking the 520d for the 530d is, for all but those wanting a faster 0-62mph time and a bit more pace on the move, futile, as the 520d is such a well-rounded proposition it’s genuinely difficult to argue against. 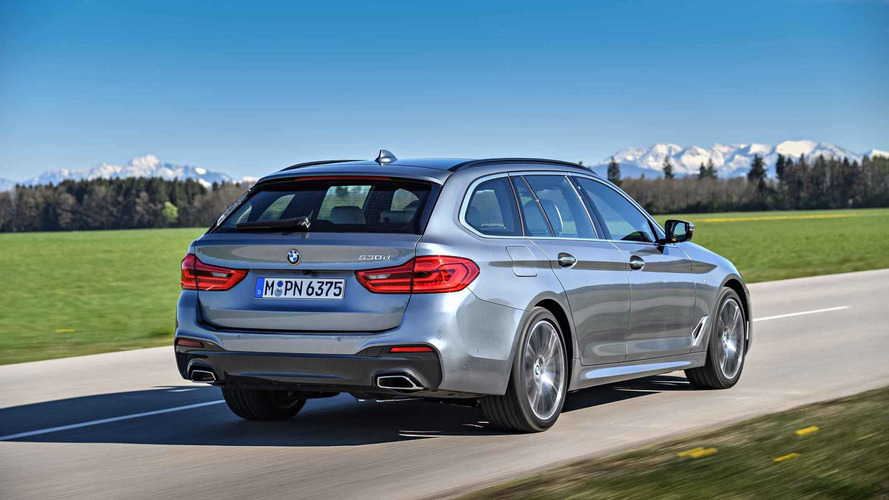 The four-cylinder 2.0-litre turbodiesel engine might have just 190hp to the 530d’s 265hp, but the 295lb ft of torque feels like it’s over delivering where the 530d’s more potent 457lb ft lacks the conviction on the move to underline that more than 50 percent increase in torque over the 520d.

The 520d has a 7.8-second 0-62mph time and refinement that, at all but the highest revs, is actually better than the six-cylinder 530d's. With a standard eight-speed automatic, which is near imperceptible in its shifting, there’s always a ratio to match your needs, be that a quick overtake or an easy cruise; the 520d’s breadth of ability is very compelling indeed.

It’ll hoodwink you into thinking it’s a soft, luxurious cruiser such is the suppleness of the ride and the fine refinement, but find a stretch of tarmac more interesting and the 5’s dynamic appeal shines through. The steering is accurate and its weighting good, even if its communication is slightly numbed by the spongy girth of the wheel itself; it’d feel more delicate with a thinner rim.

The suspension mixes that cosseting ride with great control, and the standard Drive Performance Control system allows you to switch between driving modes depending on your desire for economy, comfort or sportier settings; these are enhanced by optional Variable Damper Control. We found no complaints in Comfort mode, all-round, though the 5’s increased size does limit your enjoyment when the roads become narrower.

As with its rivals there’s the ability to hand over some control to the car itself, via the optional Driving Assistant. It adds layers of assistance to the driving experience including City Braking, Lane Departure Warning, and Cross Traffic Warning, and the Driving Assistant Plus comes with the full suite including Active Cruise Control with Stop & Go function, with steering control. Technically it’s impressive, but we’re not yet entirely convinced these systems are worth spending the sizeable premium they add to the 5’s list price.

Given the 5 Series Touring is the car in its class you’re likely to buy because you want to enjoy your time driving it, it’s a car best sampled at its simplest, both regarding the optional technology on offer and the engine. If the case for the 520d wasn’t persuasive enough on the road, then it seals the deal at the pumps. With an official combined economy figure of 62.7mpg and CO2 emissions of just 114g/km, it’ll please your accountant rather than the tax man and, in the real world, it’ll comfortably achieve mid-to-high 40mpg without trying too hard.

BMW's new 5 Series Touring might not have the space of an E-Class Estate, but it’s a more interesting drive than both the Mercedes and the Audi A6 Avant. The BMW's looks are appealing as well, and if you’re after near autonomy you can have it via the options, even if we’d pass on it and just enjoy driving it ourselves. The cabin is a bit fussy in its controls and, compared to that E-Class, the instrumentation and infotainment isn’t so neatly integrated, but the 5’s incredible refinement and rounded ability are hugely appealing.