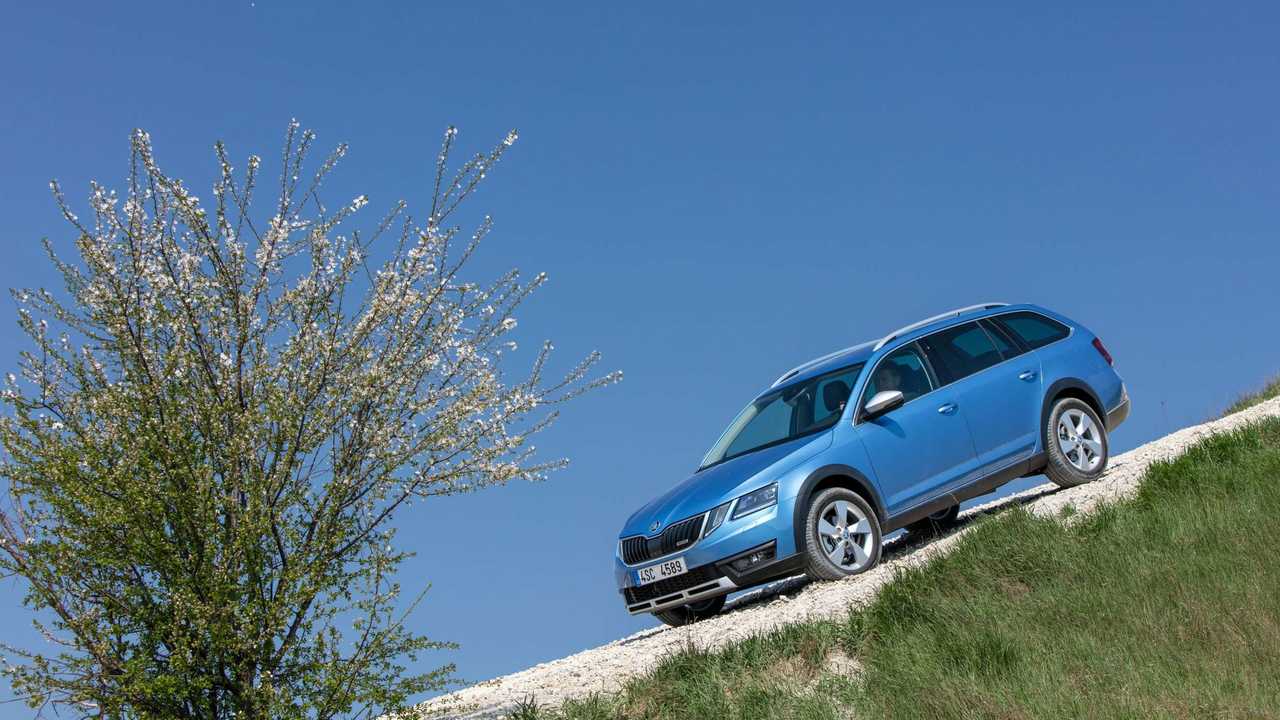 Skoda has updated the off-road-ready Scout model to make it fit in with the rest of the facelifted Octavia range. We get just two variants here in the UK, which are both 2.0-litre turbodiesels: there’s a 150 horsepower car with a six-speed manual gearbox; and then a 184hp range-topper (from £29,450) that has a six-speed DSG twin-clutch automatic. Both have Skoda’s all-wheel traction as standard and the Scout only comes as an estate, as befits its lifestyle aspirations.

There will be, in other markets, a seven-speed DSG option on the 150hp Octavia Scout, which will mark the first time in Skoda’s history that it has gained the seven-speed unit over the six-speed item it uses otherwise, but we won’t be getting that in the UK. Instead, we’ll first see the seven-speed DSG on the hotter variant of the Octavia vRS, the 245, due out later this year.

Although ‘soft-roader’ estates are proving popular, there’s not a huge amount of choice at the Octavia’s level and, as such, the Scout’s main rivals come from elsewhere within the Volkswagen Group – vehicles that use the same underpinnings and drivetrains, like the Volkswagen Golf Alltrack and Seat Leon X-Perience.

Rugged and adorned with the de rigueur accoutrements of the jacked-up lifestyle estate fraternity, the Scout is easy to spot among a sea of Octavia Estates, as it has various addenda that mark it out. Note the black plastic over its wheel arches, the silver skid plates fore and aft that necessitate different bumpers, silver roof rails, and its own design of alloy wheels. The Scout also sits 30mm higher off the deck than a regular Octavia Estate, so it has true off-roading credentials.

The big change for the 2017 model year revolves around the front end that all new Octavias have received, the Scout’s challenging quad-lamp headlights being the only visual area where you might have a problem with the Skoda. Otherwise, it looks great and has a real presence about it that makes the Octavia truly appealing.

There will be no complaints about the cabin of the Octavia Scout, as this is an interior that’s an absolute barn. There’s masses of room for the five occupants on board and then there’s a gigantic 610-litre boot out the back as well, which rises to 1,740 litres when you fold the rear seats down. There are estate cars two classes above the ostensibly C-segment Skoda that are not as capacious within as this big Czech.

Like all 2017MY Octavias, the Scout benefits from a revised interior that features new infotainment systems with dash-mounted touchscreens of at least eight inches in size – the top-spec kit brings in a lovely 9.2-inch display that’s mounted behind glass, bringing a classy air to the console. Equipment such as an Off-Road mode for the drive control, Lane Assist, heated front seats, and a heated multifunction steering wheel are all fitted to the Scout, while it also benefits from an additional suite of driver assist systems – Trailer Assist and Predictive Pedestrian Protection on top of the already-standard Front Assist, Park Assist 3.0 with a rear-view camera and rear radar, Adaptive Cruise Control, Blind Spot Detection, and Rear Traffic Alert – which have all been fitted to other models in the range.

The Octavia Scout has its own design of Alcantara and leather seats, with plenty of ‘Scout’ branding splashed here and there (on the seatbacks and the steering wheel, for instance) to reinforce the notion that you’re in the higher-riding Octavia wagon while you’re driving it, and you can also pick from dun-coloured and wood-effect interior trims and upholsteries to boost the off-roading ambience further. Alternatively, you can specify the Scout’s interior to look identical to that of a regular Octavia Estate, if you’re not keen on lots of brown plastic.

Solidly and confidently, without ever being hugely exciting, would be a neat summation of the Skoda Octavia Scout’s make-up. Little has changed mechanically from the pre-facelift model to the 2017 version, but that’s only a good thing as the Scout has always been an excellent estate car. The 2.0-litre diesel engine with 150hp and 340Nm is strong and unobtrusive in operation, even when revved hard, while the six-speed manual gearbox is perhaps a little chunky during engagement, but still nice enough to use and blessed with well-spaced ratios for the engine. In short, the 150’s on-road performance will leave you wondering why you’d splash out the additional three grand to park your backside in the 184hp Scout flagship.

In terms of the handling, there’s a neatness to the Scout’s cornering attitude that’s at odds with the marked body roll you’ll encounter; driven back-to-back with a diesel Octavia vRS Estate, the Scout (understandably) felt a much softer proposition in the bends than the performance model. But in terms of actual mechanical grip, there’s a lot to like about the way the Skoda soft-roader resists understeer and turns in with a sweet, fluid precision that any comparably-priced SUV couldn’t hope to match. It’s no dunce in the dynamic department, that’s for sure.

Yet its real strengths are refinement and ride comfort. The Skoda can hum along a motorway or fast A-road in a dignified fashion, with not as much of a compromise in terms of increased wind noise, as its tall stance might have you expect. There’s also a beautiful suppleness to the way the Octavia Scout controls its body on a bumpy road, the suspension allowing the car’s body more vertical movements without its occupants ever feeling like the Skoda is wallowing. One mechanical change that has improved matters here is a 30mm-wider rear track, which increases the car’s stability.

This natural rhythm over merely adequate surfaces also means that the Octavia Scout breathes with the road, allowing you to maintain decent pace during curvier sections of your route without having to drive the door handles off the thing. In truth, it’s a thoroughly likeable machine and while it might not be as thrilling as the vRS from behind the wheel, it’s still eminently capable all the same.

The Octavia Scout can even handle some pretty tough off-road duties, too, with good approach and departure angles (the rear has been increased to 14.5 degrees, incidentally) and the ability to take on some pretty wild axle articulation as well. But, in truth, the majority of customers purchase these cars simply for their durable appearance, rather than actually requiring any off-roading ability. The most buyers demand of cars like the Scout is that they can traverse remote country lanes in snowy conditions, and the Skoda is easily capable of that.

It’s a resounding yes from us. Skoda is one of our favourite brands, because while it is certainly no-nonsense and straightforward, its vehicles still feel like premium products – and yet they’re often usefully cheaper than key rivals. You could drive a Golf Alltrack or a Leon X-Perience instead and love either one, but the Skoda is internally huge in comparison to its distant stablemates and it’s a really refined operator.

It also feels worth the price premium over a regular Octavia wagon, but do bear in mind this is significant – a 2.0-litre 150hp TDI Octavia Estate SE without the veneer of rough-road attitude is more than £4,000 cheaper. That said, the increased comfort and class of the Octavia Scout makes it well worth the outlay, and it’s still less money than many of its most obvious rivals.