Like a fine wine, the each new Lotus model gets better with age.

While it’s impossible to expect Lotus to compete head-to-head in the wider sports car marketplace with established, volume brands like Porsche, what it produces out of its Hethel factory in Norfolk has always had the capacity to surprise. The cars tend to get better with time, too, which is the case with the Evora, originally launched way back in 2009. The Evora 400 got a significant overhaul in 2015, removing many of the compromises traditionally associated with a Lotus purchase - notably, the Evora is far easier to get in and out of, and once you’re in it the interior is actually fitted to a standard that’s more in keeping with the price tag. The performance has never been in question, nor the handling, though Lotus’s propensity for tweaking things has improved these further still. It’s no Porsche, but to many that’s a huge part of its appeal.

Did you know? The Evora is now easier to get in and out of, thanks to 43mm narrower and 56mm lower sills. That helps. A lot.

Lotus tends to appeal to a very specific audience, buyers who value driving dynamics, performance, and agility over everything else. That used to bring some compromises, but the Evora 400 is less burdened than Lotus models of old, as the cabin is spacious and easier to get in and out of than it was, the fit and finish of a far better quality than anything that’s ever rolled down the Hethel production line before it. The drive remains sensational, and the 400 in its name refers to its output, that 400hp from a supercharged 3.5-litre V6 petrol engine bringing plenty of pace to enjoy the sublime chassis. This really is a Lotus you could conceivably use as a daily driver, thanks to the 2+2 seating layout and even the option of an automatic transmission. The Evora is, admittedly, more expensive than it’s ever been, but it feels, just about able to justify the price. For those who want more there’s a lighter Evora 410 model, which drops 85kg of mass thanks to use of carbon fibre, ups output to 410hp and has a 190mph top speed, though it’s limited to just 150 cars a year and adds a sizeable wedge to the already big sticker price. 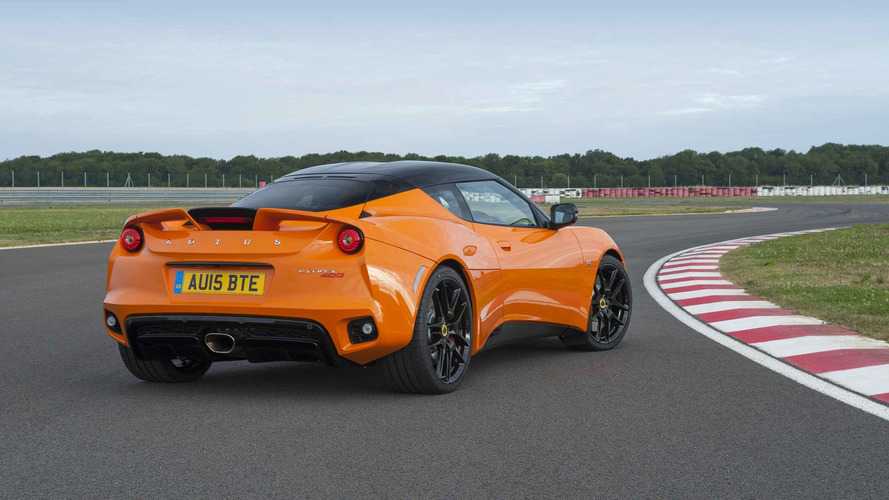 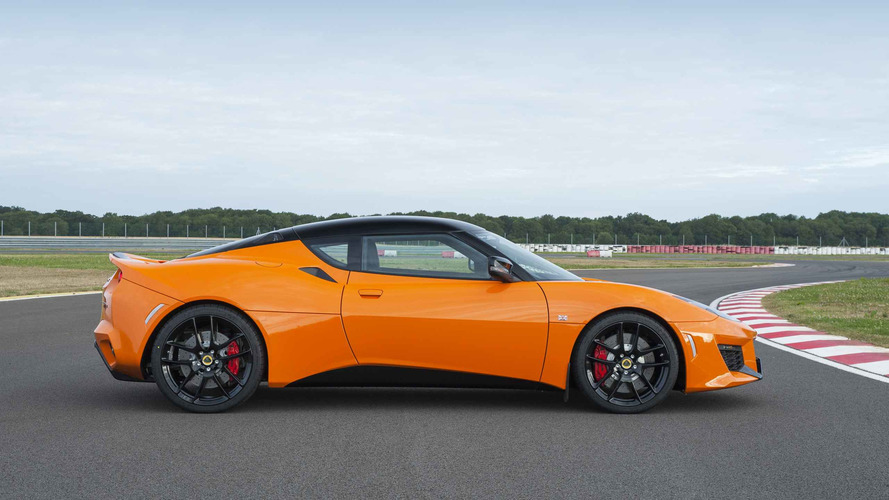 Around since 2009, Lotus gave its Evora a significant overhaul in 2015 and created the Evora 400. Edgier looking up front, the sharper lines around its nose better fit with the crisp lines that define its flanks, and neatly distance this hugely refreshed model from those that preceded it. It's a busy shape that’s at its best if you choose the optional Black Pack, which adds not just a contrasting black roof but black mirror caps and black sills, too, the latter in particular lengthening and lightening the Evora’s profile. There’s no mistaking it for anything but a Lotus, and that’s a huge part of its appeal, knowing that the technical looking design is aerodynamically efficient, even if you need to be deep into illegal speeds before you really benefit from any downforce. Lotus has worked on the panel fit and finish over time too, which is noticeable, so the Evora 400 is a car that looks like it’s able to justify its loftier price, and its rarity means it’ll always turn heads more than its far higher volume rivals. 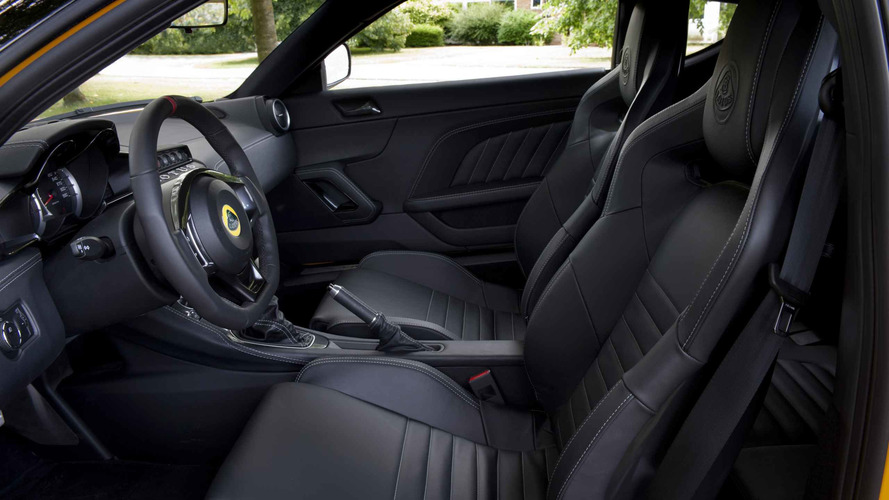 Key to the 2015 revisions was Lotus addressing the deep and wide sills that have long been a signature of its extruded-aluminium tub constructed cars. Lotus has managed to chop 43mm from the width and lower the sills by 56mm, which is the difference between ungainly clambering in and the chance to do so with some degree of finesse. Once in, you’re sat in light Sparco seats, which not only hold you in tightly for those promised high cornering forces, but provide excellent comfort and support, too. The steering column adjusts for reach and rake, as well, allowing the perfect driving position behind the wheel.

The cabin itself is a huge improvement over Lotus of old, as the switchgear positioning now makes some sense, though the double-DIN satnav and infotainment looks every bit the aftermarket-sourced item it is (and is pretty fiddly) and it’s a shame that Lotus still borrows its column stalks from a circa 1990 Ford parts bin. Comfort in sports cars is relative, but suspension tuning is Lotus’s forte, and the Evora 400 doesn't just exhibit taut body and wheel control, but achieves it while delivering a ride comfort that’s in a different league to pretty much anything else in the sector. That it manages that without resorting to any electronically adjustable dampers is a credit to its chassis engineers, making the Evora both comfortable and sharp to drive. There are standard heated seats in the 400 and air conditioning too, though you can delete the latter if you’re after ultimate weight savings.

The Evora is billed as a 2+2, but those '+2s' best be small, as it’s tight back there. There are at least ISOFIX mounts for child seats, though Lotus offers a free rear-seat delete option. The boot isn’t going to win any prizes for space either with just 160 litres to use, and anything you put in there will get hot thanks to the fact it’s behind the engine and above the exhaust. 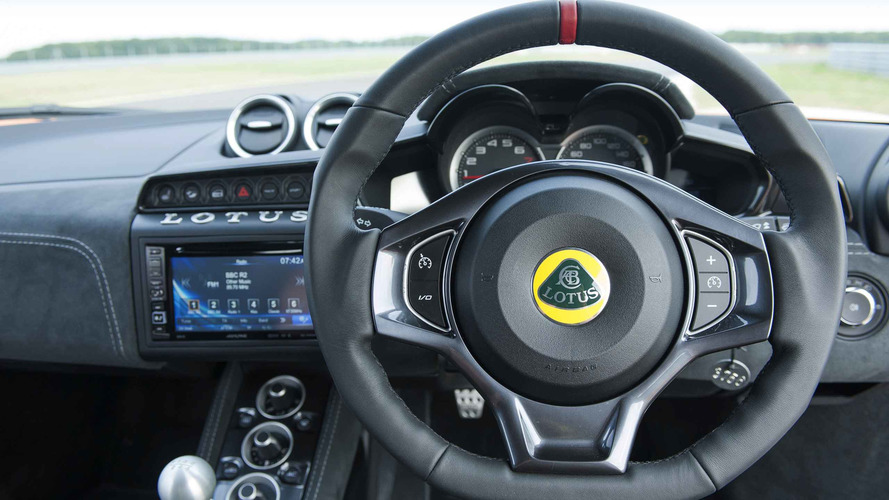 You don’t buy a Lotus Evora looking for cutting-edge connectivity and technology. Modern distractions are few, then, though the stereo system does have the ability to connect to your phone - though it’s not particularly easy to do so. There are four speakers for the stereo, and a reversing camera linked to the stereo’s screen, which is handy as the view out the back is hopeless otherwise. You can add a subwoofer and amp to that stereo optionally, likewise you can have electrically adjusted seats and cruise control, but that’s about it as far as technology goes. 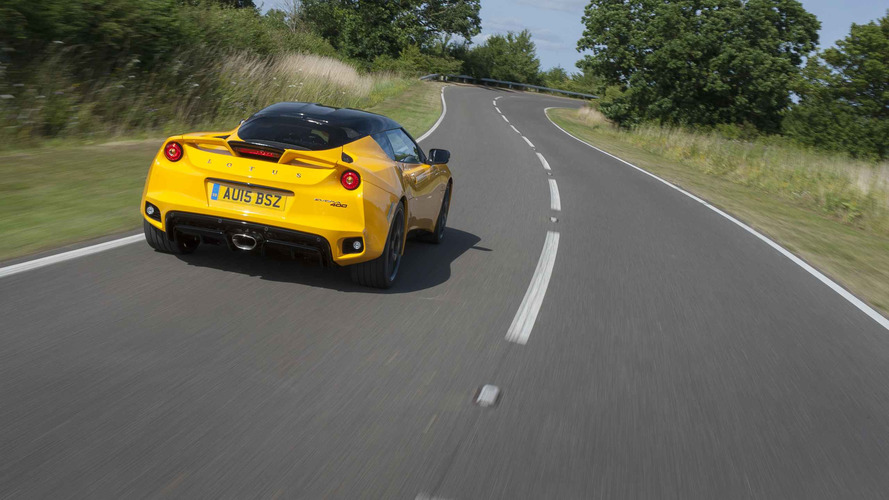 The specification of the Evora 400 is a motorsport catalogue of parts that promises a great deal. The suspension in particular, comprising of double aluminium wishbones with Eibach springs and Bilstein dampers, off which hang AP racing four-piston brakes. Lotus is so obsessive about its suspension set up that 19-inch front and 20-inch rear alloys are all you can have - there is a choice of styles and finishes, but not sizes. The car has been set up to ride on those wheels, and it’s been done so perfectly; the way the Evora can deliver fine control allied to smothering comfort is little short of sensational; nothing else, perhaps with the exception of a much more expensive McLaren, is able to judge that tricky balance so cleverly.

The steering is hugely informative, the hydraulically assisted system translating everything you need to know about the surface under the car's front tyres without being busy and distracting; its weighting and accuracy are among the very best you’ll ever experience. If only the same could be said about the gearshift, as the six-speed cable operated manual shift needs some patience and lacks the slickness of the best manual transmissions out there. It’s not so bad you’ll option the automatic (it too lacks the quickness of shift of rivals’ twin-clutch set-ups), but it’s definitely the weakest link in the Evora’s makeup. While we’re nit-picking, the height of the brake pedal doesn't make heel-and-toe downshifts particularly easier, either.

The 3.5-litre V6 engine is sourced from Toyota, to which Lotus bolts an Edelbrock supercharger, the result plentiful low engine speed urge, allied to a still enthusiastic appetite for revs. It sounds great too, with its switchable exhaust liberating a more rousing note when the mood takes you. There’s a three-stage ESP system, which, in typical Lotus fashion, is tuned to perfection, offering Normal, Sport, and Race modes, all judged nicely, aiding rather than hindering your control on road and track. It’ll manage the 0-62mph dash in 4.1 seconds (3.9 seconds for the Evora 410) and onto a top speed nudging 190mph. That’s quick by any conventional measure, thought the way the Evora can use and carry its speed is what really distinguishes it from its competition, the way it flows down even the trickiest, tightest UK roads has to be experienced to be believed. 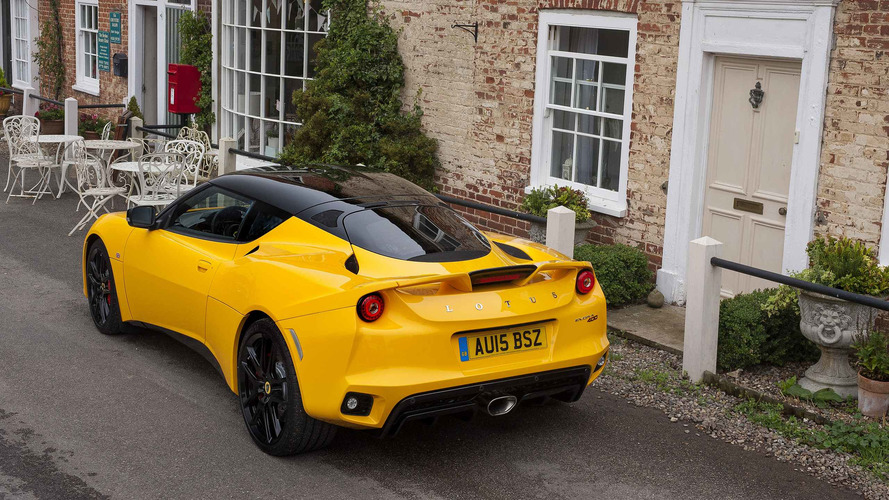 Lotus’ small manufacturer status is evident when it comes to safety equipment; it comes with the basics, though little else. There’s that clever stability and traction control system, and the Evora’s structure is strong, though the airbag count is paltry by modern standards with just a pair up front - though credit to Lotus for featuring ISOFIX mounts in the rear seats for child seats. Tyre pressure monitoring is standard and there’s ABS for the impressive AP Racing Brakes, but there’s none of the active assistance that’s creeping into rivals' specifications, though it’s likely most Lotus buyers won’t bemoan that one bit. 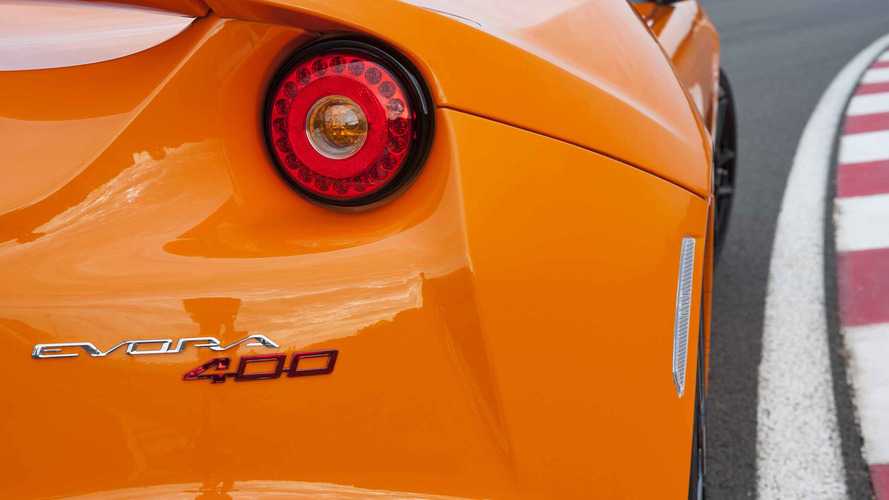 There are two solid colours of red and yellow, and eight further metallic choices from the standard colour palette. To that you can add the Black Pack, which means a black roof, black sills and black door mirrors.

There’s only really one specification, the Evora 400, as the Evora 410 is very limited in its build numbers worldwide, and not really worth considering unless you’re a weight obsessive and must have the marginal increase in performance it brings. Standard equipment is more comprehensive than you used to get with Lotus; indeed, it’s positively luxurious, with heated seats, central locking, air conditioning, satnav, a reversing camera, and leather upholstery. There’s further optional leather, Alcantara, and carbon trim packages, the choice of an automatic transmission, upgraded stereo equipment, electrically adjusted seats, cruise control, a lightweight battery and titanium sports exhaust, too. 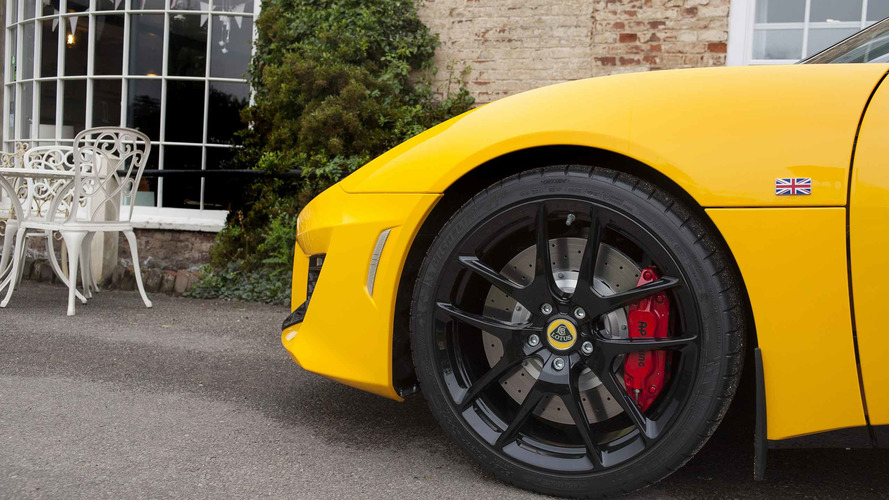 Although it’s got near supercar performance, running costs shouldn’t be too punishing. It’ll be relatively light on brake and tyre wear, while the engine, borrowed from Toyota, shouldn’t cost too much to service. Fuel economy is quoted at 29.1mpg, but expect a low 20s in reality, and CO2 of 225g/km keeps it in the sensible tax zone, too, just managing to stay in Band K for VED. Residual values are good for all but the highest mileage examples, too, which helps justify your purchase.

The Evora needs to be serviced annually, or every 9,000 miles, whichever is sooner. 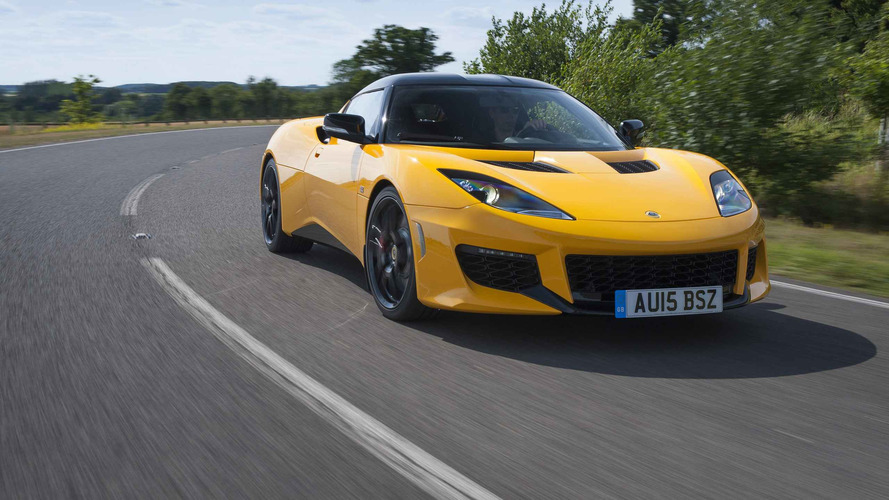 The Evora was priced closer to the Porsche Cayman S than the 911 when it was introduced, but with its continued improvements and time that price has crept up to the £72,000 an Evora 400 will cost you before you’ve added an option. Given the performance that’s justifiable, not least because the interior has improved, too, while the competition’s pricing hasn’t exactly remained static, either.