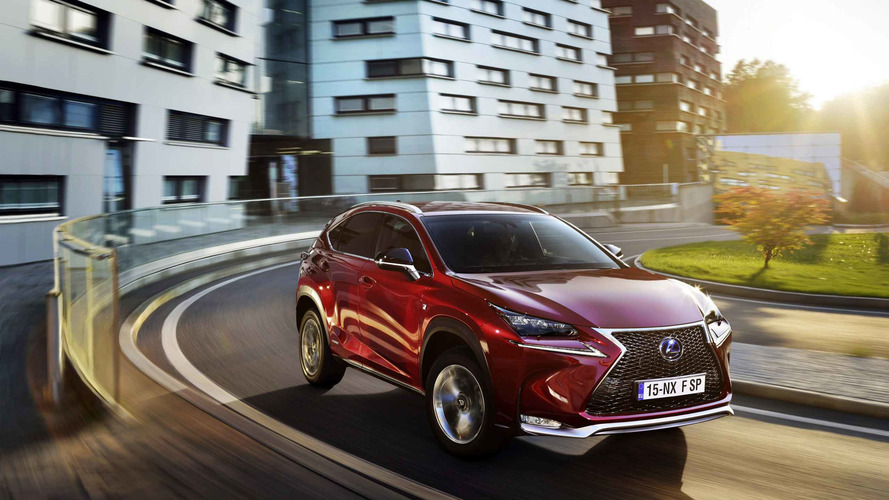 Oozing in tech and offering fantastic emissions, but not as good to drive nor as practical as key rivals

Looking as much like a piece of modern architecture as an SUV, the Lexus NX is a cluster of angles and creases. It makes rivals such as the Audi Q5 and BMW X3 look highly conventional. Being a Lexus, there is a hybrid powertrain with an electric motor (and a second motor, giving four-wheel drive, in higher-spec models), but the Japanese car maker has also created a petrol-only, front-wheel drive model. Inside, the NX offers a high-quality sanctuary with seating for five. There is no shortage of technology in the cabin, including a wireless charging pad for your smartphone. Add to that a large boot, and reasonably low running costs in the case of the hybrid versions, and the Lexus compact SUV makes a good case for itself.

Did you know? The NX was the first Lexus production model to feature a turbocharged engine.

You won’t find a more striking-looking SUV in the segment than the Lexus NX. It might look as if it has arrived from the future, but behind that taut sheet metal is a car that is neither as comfortable nor as fun to drive as its key rivals, and that's blighted by a frustratingly unintuitive infotainment system. The option of a turbocharged petrol engine will appeal to some, but it is the well-established Lexus hybrid technology that is the bigger draw and makes this a good value choice for company car buyers. Ultimately, an Audi Q5, BMW X3 or Volvo XC60 are better on every front but emissions.

Much like the rest of the current Lexus range, the NX is full of sharp angles, which makes it one of the most distinctive looking SUVs in the segment. The F Sport mesh grille makes a big difference to improving the look of the NX further, while thin LED daytime running lights add to its futuristic image and, overall, once chosen in the right exterior colour, the NX looks very striking indeed. It stands out from the crowd, and you have to hope that any crowd gazing at it isn't frightened off by that vast, jagged front grille.

There are also some nice touches that you begin to notice in the design, the more you look at it. For example, as you approach the car at night, the proximity sensor detects the key and illuminates a thin sliver of light along the top edge of the door handle for convenience. The black plastic moulding around the wheel arches reminds you of its SUV roots, but this is a car you won’t want to get muddy.

The style and finish of the interior are among the NX's most appealing features, and Lexus fit and finish are among the best. Even if some of the buttons do look and feel a bit plasticky, they all seem solid and should last a long time. There are a lot of them, though, and it stops just short of looking too busy. Elsewhere, the cabin is brightened up by metal-look inserts around the centre console, dashboard and steering wheel. On higher grade models the electrically-adjustable seats offer lots of movement, and once you get settled the driving position feels comfortable.

In the back, the passenger space is adequate provided the driver isn’t too tall and a flat floor makes this good if you have to seat three in the back sometimes. Headroom is fine for those of average height, but overall a BMW X3 or Audi Q5 are more spacious.

Boot capacity is 475 litres in all NX models, increasing to 1520 litres when the rear seats are folded forward. which is quite a way off the 550 litre boots offered by the Audi and BMW. The electrically operated tailgate opens to reveal a good-sized aperture, but the load height is a little high.

Even though the cabin of the NX gets a large infotainment screen it is let down by very basic graphics, especially in the satellite navigation, while controlling the system via its touch-sensitive, haptic pad requires a delicate touch which isn’t easy when driving. The menus are also awkward to navigate and the system as a whole is miles behind the slick touchscreen or rotary interfaces you get in the best rivals.

Among the other tech features available in the NX is a wireless charging pad for compatible smartphones, meaning you can just place the phone on top and it will recharge without the need to plug it in – provided it's the right kind of phone, of course. The Bluetooth interface is quick and easy to set up, and works well.

Which Lexus NX model you choose has quite an impact on the driving experience. The turbocharged, petrol-engined NX 200t suggests the promise of a sportier drive, but it is still tuned more towards refinement than outright pace. This 238hp engine is smooth, and with a 0-62mph time of just 7.1 seconds it feels brisker than its hybrid counterpart. Its six-speed automatic transmission feels better than the hybrid’s CVT system too, but this is in no way a match for the entertaining, hot-hatch like handling of a BMW X3 or Porsche Macan.

When you drive the hybrid at a more leisurely pace and don’t hurry the CVT, it's a relaxing and refined drive. Lexus has added a ‘kick down’ feature to the transmission’s software that is designed to give it improved acceleration and make it feel more responsive, but in practice the difference is negligible. If you do decide to give it some beans, you are met with prolonged and high engine revs as the needle slowly makes its way around the speedometer, making this annoyingly noisy and unrefined if you want anything more than very moderate acceleration.

The F Sport model gets a Sport+ mode and different suspension dampers, making an already fidgety ride on bumpy roads a bit more restless, but it still isn’t really about outright performance. Any NX is designed primarily to offer good fuel economy and engine refinement, and when you approach the NX with that in mind it mostly feels like a well-polished machine – on a smooth road, at least.

All versions of the NX 300h have an electric motor in unit with the engine and front-wheel drive transmission, but higher specification levels come with a second motor to drive the rear wheels to give four-wheel drive. When the NX senses that the front wheels are losing grip, it progressively reduces the front motor's output and correspondingly brings the rear motor into play instead.

As is typical of this segment of the market, the Lexus NX comes with many safety systems as standard, and most of these are available on all models. Helping to keep the vehicle stable are a traction control system, Vehicle Stability Control (VSC) and Electronic Brakeforce Distribution (EBD). Hill-start Assist Control (HAC) ensures smooth getaways on inclines, and on the move the Adaptive Cruise Control with Pre-Crash Safety can take the burden out of long motorway journeys. Higher-grade models also get advanced systems such as Lane Keeping Assist and Blind Spot Monitor system with Rear Cross Traffic Alert.

The Lexus NX scored highly in the Euro NCAP test in 2014, achieving a full five-star safety rating. In the area of adult and child occupant protection it scored 82 percent in each, while pedestrian protection was rated at 69 percent. The numerous safety systems earned it a 71 percent rating in the safety assist section of the test.

In keeping with the premium feel of the NX, Lexus offers a range of colours which isn't quite what you’d call vibrant. There is just one standard non-metallic colour, Velvet Black, while the metallic hues are Sonic White, Mercury Grey, Satin Silver, Sonic Titanium, Graphite Black, Mesa Red, Copper Brown and Sky Blue, the last two exclusive to the NX 300h. The NX 200t counters with model-specific F Sport White, Azure Blue and Solar Flare as well as the main range listed above.

On the NX 200t, Lexus offers just the F Sport specification. This grade features an L-mesh design for the so-called 'spindle grille' on the outside, while inside there are F Sport seats and leather upholstery plus an F Sport steering wheel with paddle shifters. A wireless smartphone charger is in the centre console, at the rear is an electrically-operated tailgate.

For the NX 300h there are four grades to choose from, starting with the entry-level SE, which features 18-inch alloy wheels, a reversing camera, eight-way electrically adjustable seats, auto lights and wipers, cruise control and climate control.

Priced towards the middle of the NX range is the Luxury model. This four-wheel-drive variant gets 18-inch alloy wheels, LED front fog lights, front and rear parking assist sensors and smart entry.

The more performance-themed F Sport features that mesh grille and other subtle exterior styling details to differentiate it from the rest of the range. Inside is F Sport leather upholstery and an electrically-adjustable steering wheel.

Top of the tree is the NX 300h Premier. This model gets chunky-looking 18-inch alloy wheels but keeps the regular front grille. Interior equipment includes a high-quality Mark Levinson sound system with 14 speakers.

Even though the Lexus has plenty of presence on the road, it takes up a relatively compact space for an SUV of this type. It is slightly shorter and narrower than the BMW X3, for comparison.

There is, as you might expect, a noticeable difference in fuel economy depending on whether you choose the turbocharged petrol engine or go for the hybrid model. According to official figures, the NX 200t will return 35.8mpg on the combined cycle which is not very impressive nowadays, even for a car of its size. As you would expect the hybrid performs better, with an official 55.4mpg, but if you want to get close to that you will have to drive with a very light right foot.

All Lexus NX models are covered by the company's usual three-year/60,000-mile manufacturer warranty. Hybrid models get a five-year/60,000-mile component warranty as well. Servicing is dependent on use, and Lexus applies intermediate and full service intervals. If you make shorter journeys with lots of cold starts the suggested interval is every 10,000 miles, whereas if you typically have long distance commutes at a constant speed, the interval stretches to 12,500 miles. In both cases it's an annual event, if the year is up before you reach the mileage limit. Following that there are Full +60 and Full +100 intervals that replace longer interval items at 60,000 and 100,000 miles respectively.

Lexus lists menu pricing for its services according to each model, and it's also possible to buy a Lexus Care package which covers the costs of maintenance in one monthly payment.

Pricing for the NX starts at just over £34,000 and peaks at over £44,000. Somewhat surprisingly, the cheapest version of the purely-petrol NX 200t is almost £10,000 more expensive than the cheapest hybrid NX. Ultimately, the NX is a pricey option for retail buyers, but company car users should look closely at the hybrid as it'll offer cheaper BIK tax payments than just about any rival barring the Volvo XC60 T8 plug-in hybrid.