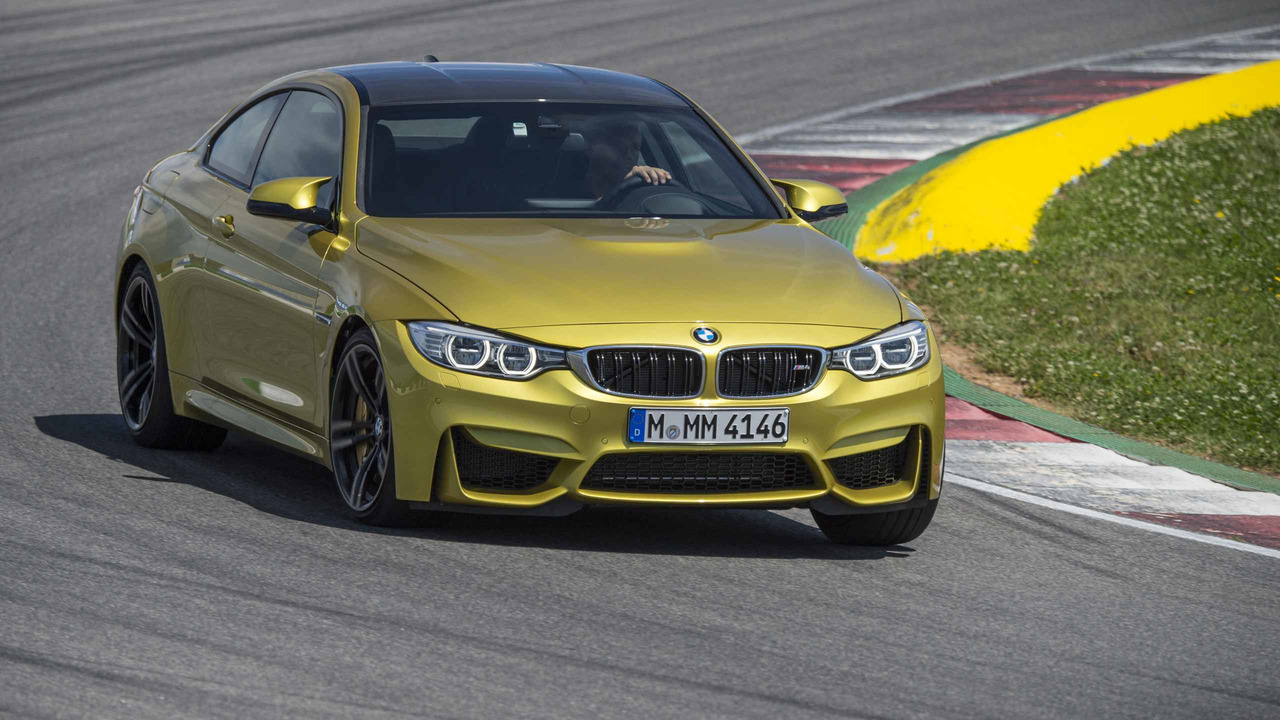 BMW's iconic performance coupe, with a new name, the M4.

It might not be apparent, but this is BMW’s most iconic performance coupe reimagined for the 2010s. It’s called the M4, but that’s because coupe versions of the 3 Series are now called 4 Series – in essence, though, this is the latest incarnation of the M3 (although, just to confuse things, the M3 nameplate continues as a four-door saloon). The M4 sends drive to the rear wheels and is powered by a six-cylinder, twin-turbocharged 3.0-litre petrol engine developing at least 431hp. That makes it ridiculously quick in all its guises. You can fit the M4 with a dual-clutch automatic gearbox, or even a Competition Package that hikes power to 450hp. For maximum posing value, there’s also an M4 Convertible, with a three-piece folding metal roof.

There’s no doubt the BMW M4 is a brilliant performance car and one that meets all the targets BMW set for it when it morphed from the fourth-generation M3 Coupe of 2007-2013, into the M4 in 2014. BMW wanted its legendary motor to have more torque, more power, less weight, and even better performance – and, on all counts, the M4 has delivered on the promises. It also looks sensationally good and is reasonably practical, as it’s no less accommodating within than a regular 4 Series. But if there’s anything that can take the sheen off the M4, it’s that it’s just a little too extreme at times. Previous generations of M3 have always commanded respect, but they’ve never forcibly demanded it by occasionally scaring their drivers witless. The M4 is different: if the conditions under its tyres aren’t favourable, it can feel like a proper handful. Nevertheless, the M4 remains one of the greatest all-round performance coupes you can possibly buy.

There will be little chance even casual car observers will mistake the M4 for a regular 4 Series. Its flared wheel arches, wider track, revised bumpers with large air intakes up front, trademark M quad exhausts, double-slat kidney grilles, and the bonnet’s bulging Power Dome are all dead giveaways to this car’s potency. Then there’s the carbon-fibre roof of the Coupe, designed to lower the M4’s centre-of-gravity. The carbon roof is deleted if you choose the no-cost sunroof, or you opt for the Convertible model, with its three-piece folding metal lid.

Standard wheels are 19-inch alloys in Ferric Grey, or Black as an option. However, the Competition Package further enhances the look of the car, not just with the High-Gloss Shadowline exterior trim details, or the Black Chrome exhaust tip finishers, but primarily through a set of the most gorgeous, 20-inch star-spoke alloys.

It’s beautifully made within and there are some M-specific details to lift the ambience, like extended Merino leather, Anthracite headlining (Coupe only), figure-hugging seats bearing an illuminated M logo, and an M-branded instrument cluster and three-spoke multifunction steering wheel. The Competition Pack (CP) really ups the ante with a pair of glorious M Sport bucket seats, even more deeply contoured than the standard items, but sadly these are not part of the CP for the Convertible. And, as good as any M4’s cabin is, it doesn’t feel massively different inside from an M Sport specification 4 Series Coupe.

The M4 is not as practical as its M3 Saloon cousin, as it has two fewer doors and thus access to the pair of rear seats is tricky. Headroom is limited in the back of the Coupe and legroom isn’t generous either, while legroom diminishes further in the Convertible. Boot space is a useful 445 litres on the Coupe, with the rear seats splitting 60:40 to free up room for longer items, and 370 litres for the Convertible… until you drop the top, at which point it is reduced to 220 litres. The Convertible does at least get a loading aid (which lifts the folded roof out of the way when you want to access the boot), a storage tray in the luggage compartment, and additional storage behind the rear seats (for the optional wind deflector), although a through-loading system that allows the rear seatbacks to be dropped is on the options list.

Electrically adjustable and folding door mirrors, electric front seats with a memory function, and a reach-and-rake adjustable steering column mean a spot-on driving position is easily attainable in the M4.

All BMW M4s get the Media Professional pack – including 3D satnav mapping – on an 8.8-inch display screen as standard, all controlled via the magnificent iDrive system. DAB, Bluetooth with wireless phone charging and Wi-Fi preparation, and BMW’s ConnectedDrive features are part of the standard specification. Additionally, the open-top model has an excellent tech package called Convertible Comfort, which adds a heated steering wheel, a folding wind deflector, and neck-level Air Collar heating airflow to the M4.

There can be no doubt the M4 is blisteringly quick, from any point on the rev counter. That’s because it has a twin-turbo 3.0-litre straight-six and those two blowers mean masses of torque. So while peak power is up just 11hp from the M4’s V8 predecessor, torque has ballooned 37 per cent from the old car’s 295lb ft at 3,900rpm, to 406lb ft here – and it’s spread across a huge swathe of the engine’s operating range, from 1,800- to 5,500rpm.

Depress the throttle any more than, say, a fifth of the way through its travel and the M4 will lunge forward in a ferocious manner that will be wholly unfamiliar if you’ve been weaned on a diet of rev-hungry M3s. It doesn’t struggle for traction in the dry, either, so despite the car being rear-wheel drive, you can safely deploy much of its punch on the roads with little fear. And all the major controls – the exquisite steering, the mighty brakes, the excellent gearboxes, be they the six-speed manual or the seven-speed DCT automatic – are calibrated with the excellence we’ve long since come to associate with BMW’s M cars.

The problems come in the wet. As BMW hasn’t ever had to deal with this sort of torque in an M car before, it feels like the M4’s fixed rear sub-frame and firm damping (it’s Adaptive M Suspension, alterable through various modes) struggle to control vertical rear-wheel movements. And in the wet, that makes for a car that’s extremely snappy. Yes, it’s exciting – but previous M3s always felt all-of-a-piece and cohesive, whereas there’s a suspicion the M4 has too much torque and not enough weight to cope with it all.

The CP, though, rectifies this issue. It not only brings a 19hp increase to 450hp overall (torque remains unchanged), but it recalibrates the Active M Differential, the Driving Modes (Comfort, Sport, and Sport+), and the DSC system, while specific settings for the Adaptive M Suspension (springs, dampers, and anti-roll bars) are also incorporated. The result is an M4 that is a tenth of a second quicker to 0-62mph than its 431hp equivalent, and much more controllable near the car’s ultimate dynamic limits.

The BMW 4 Series has not been Euro NCAP-tested in any guise, but as it’s very closely related to the five-star 3 Series, the M4 will be very safe. A plethora of airbags and strong brakes are basic equipment that help the M4 avoid incidents, while the Convertible has roll-over protection too, but reasonably priced options include Adaptive LED headlights, the Driving Assistant suite of items (City Collision Mitigation, Forward Collision Warning, Lane Departure Warning, and Preventive Pedestrian Protection), Dynamic Safety, High-Beam Assistant, a reversing camera, the Surround-View 360-degree cameras, Speed Limit Display, Park Assist, and the M Head-Up Display too. For the ultimate stopping power, M Carbon Ceramic Brakes are offered, although these are more than £6,000.

Metallic paints won’t cost you any extra money and there are seven of them, with the one solid shade being Alpine White. Choose from Mineral White, Silverstone II, Mineral Grey, Black Sapphire, Yas Marina Blue, Austin Yellow, and Sakhir Orange II. Also available are some Individual colours, which require a premium – Champagne Quartz, Tanzanite Blue, Smoked Topaz, and Azurite Black. There are six more Individual colours, though, which are special order paints: two are Moonstone, and Pyrite Brown; but four more hues are the distinctive ‘Frozen’ paints, which are metallic but have a matte-effect look – these are Brilliant White, Silver, Red, and Black.

Bear in mind the Frozen paintjobs are expensive and they require additional, costly maintenance. BMW advises that you do not polish or wax any vehicle in this finish, nor should you use mechanical means of cleaning the paint’s surface. Owners should also use a no-shine, no-wax, non-filling matte paint sealant from time to time, and finally – most impractically of all – you should clean all residues off the car immediately: splattered insects, road tar, sap, oil, bird’s mess… it all needs to be removed almost as soon as it hits. This is presumably why the Frozen finish is not a popular choice for the M4.

There are no trim levels as such. All you can do is add the Competition Pack to all models. Aside from the changes we’ve already outlined, it further brings the BMW Advanced Loudspeaker system and M tricolour stripes on the front seatbelts. All M4s come with dual-zone climate control, cruise control with a brake function, heated front seats, automatic lights and wipers, Xenon headlights, and Park Distance Control sensors front and rear.

While it may be a two-door performance machine, the M4 is not a compact car. It’s nearly 4.7 metres long and it’s fairly wide, too.

A twin-turbo petrol with in excess of 400hp is never going to be light on fuel, but the whole reason BMW went with forced induction for the M4 was to make it more efficient than the 4.0-litre V8 M3 that went before. Despite its performance focus, the M4 in all its guises is fitted with EfficientDynamics technologies. These include an auto start-stop system, brake energy recuperation, the electric power steering, and an optimum shift indicator.

To an extent, that has worked, because every M4 is claimed to do more than 30mpg. Pick the DCT for best fuel economy, as it’s marginally more efficient  than its equivalent manual model in all cases, and the lighter Coupe is better on juice than the Convertible. The ‘greenest’ M4 is the M4 Coupe DCT, with 34mpg and less than 195g/km of CO2. Even the M4 GTS was said to return 33.2mpg…

While the BMW M4 has a Condition-Based Servicing system that tells you when it needs to go into the garage, there are two packs that cover servicing, or servicing and maintenance, for up to five years or 50,000 miles. Service Inclusive covers the servicing alone; Service Inclusive Plus, though, also chucks in items that will wear in that time, like windscreen wipers – and, pertinently for such a fast car, brake discs and pads. It’s expensive, but given the M4 is a specialist car, running costs for this BMW will be considerable so both these packs make a lot of financial sense.

Prices start at around £57,000 for the manual Coupe with 431hp and rise to more than £66,000 for a Convertible DCT fitted with the Competition Package. Rough rules of thumb are as follows: fitting DCT is around £2,500 on all cars; the Competition Package is £3,000 for the Coupes, and £2,200 for the Convertibles (because the open-top cars cannot have the glorious M Sports bucket seats in the front); and a Convertible is about £4,000 more than an equivalent Coupe.