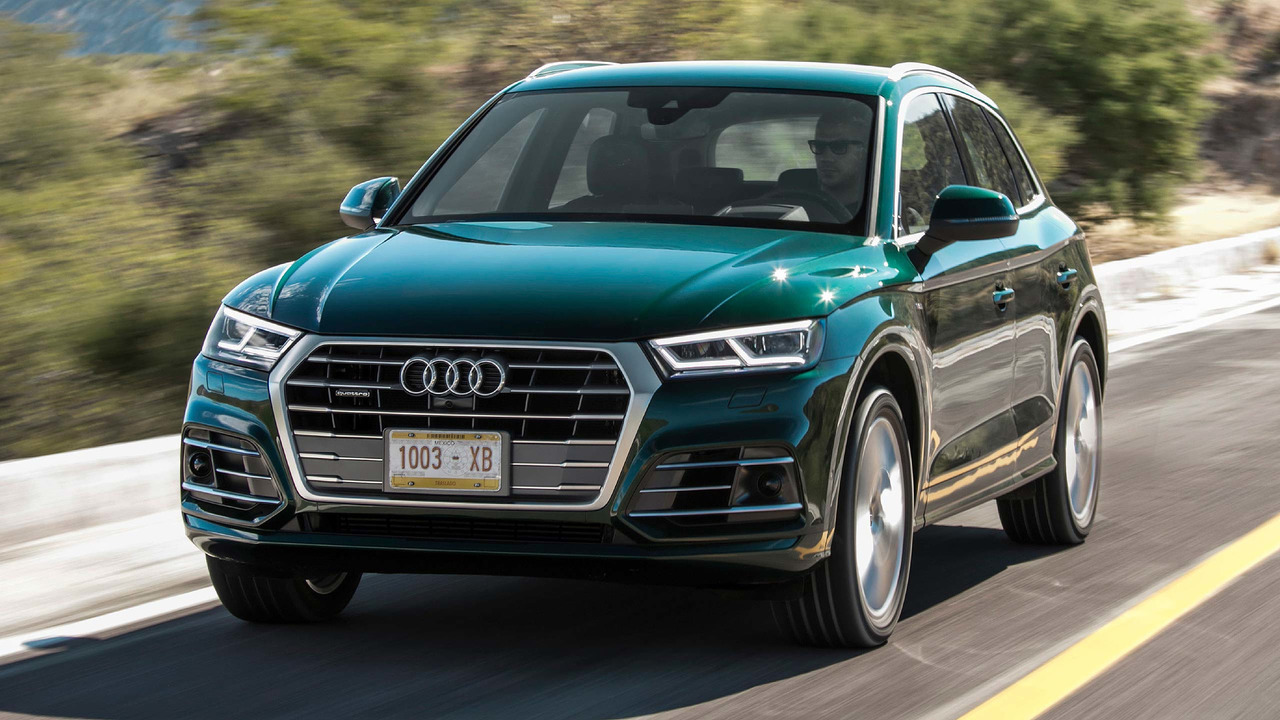 Expensive, but the highest quality of its class.

SUVs have developed in such a way that the Audi Q5, a large car by most standards, is considered mid-sized. It’s a popular pillar of Audi’s range with great engines, advanced technology and comfortable seats, but there’s a premium to pay for all of its talents. It’s well built and luxurious, but many of its best features cost extra.

Did you know? To save costs, the standard seats on SE and Sport models are actually almost half fake leather

Even without options the Audi Q5 is a touch expensive, but the quality of the end product is the very highest in the class. It drives with such refinement and confidence thanks to a stiff structure and extremely capable, if optional, air suspension. The main problem Q5 buyers face is that to get the best from it they need to specify certain expensive extras, but Audi’s customers are generally willing to pay that price. Only the BMW X3 can rival it for its blend of strong engines, precise handling and excellent practicality.

The latest Audi Q5 is a big car, and it really makes its size obvious with the standard 18in wheels, which look tiny beneath the wheel arches. The design benefits from an upgrade to large wheels partly for that reason, and partly because Audi has chosen a bolder look for this all-new 2017 model’s bodywork.

Where its predecessor was a little plain, the new car is fuller and more muscular, with a more prominent belt line that rises with the swell of each wheelarch.

It’s still not a particularly head-turning car, but its stance is poised and confident, its personality needing no trappings of fame or notoriety to project a sense of success on its owner. Top-drawer paint finishes add a touch of class, and the latest metallic colour options look deep, rich and flattering under sunny skies.

All Q5s come with either mixed real and artificial leather upholstery or, at S line trim, in a mix of real leather and Alcantara. You climb into the car rather than dropping down onto the seats, the front two of which are heated as standard despite only manual adjustment for the back and base. Three-zone climate control is great to see as standard as well.

The seats themselves are chunky, broad-backed and supportive, although it’s possible that some people may want more lumbar support on SE models. Steering that seems over-light at speed makes comfortable work of low-speed driving around town, including parking and switching lanes in traffic jams. There’s loads of reach and rake adjustment in the steering wheel, making it easy to find the perfect driving position.

Audi really understands what's needed to make a car easy to live with day-to-day. The boot in this latest Q5 is larger, for one thing, and a powered tailgate is now standard across the range, but it’s the little things inside the cabin that impress most. There is a slot in the centre console specifically designed to hold the average mobile phone and stop it sliding around, and wireless mobile phone charging is available from the options list if your handset is compatible.

As for stowage space, the Q5 has plenty. A minimum of 550 litres sits behind the rear seats, but that rises as far as 610 if the optional adjustable rear seats are slid forwards. A 60:40 split is standard but the optional setup comes with a 40:20:40 split and a through-load function. With the back seats down the total volume increases to 1550 litres.

Not much counts against the Q5 for practicality, but as with most four-wheel drive cars it’s a shame about the bulky transmission tunnel running down the middle of the cabin. It means a middle-seat passenger in the back probably won’t enjoy long journeys. A Lexus NX is better for middle rear passengers.

All models come with a handsome bounty of technology, from xenon headlights to Audi Drive Select driving modes, which work best when combined with the optional adaptive air suspension that can also adjust the ride height on the fly. This configuration allows for raised off-road and all-road modes that activate special display readouts for lean angle and so on. The air springs will also compensate for loads in the boot or on a tow bar.

Drivers will always find a USB port, cruise control and at least 10 stereo speakers. Navigation is only standard from Sport grade upwards. The basic infotainment interface measures seven inches and uses the familiar Audi MMI controller, which is among the very best on the market. It’s easy to use and makes navigation around the menu systems intuitive. Audi Virtual Cockpit, making the entire instrument panel a configurable TFT screen, is available for a price.

Many of the optional technologies have been condensed into packs for better overall value and ease when it comes to building your own. Packs going by the names of Comfort & Sound, Vision, Light & Vision, Technology and Parking Assistance are on the list, but some require other specific options or packs to be added as well, which can get confusing.

A stiffer structure and revised suspension settings allow the Q5 to lean less through corners than its predecessor while staying comfortable on all but the sharpest of bumps. That measured ride quality gives the car a confident feeling despite its obvious height disadvantages when it comes to cornering prowess. A weight saving of up to 90kg over the old model, depending on the specific variant, also helps, but the steering is too light and lacks any real feel.

Audi’s highest-powered 2.0-litre TDI and the eager but refined 2.0-litre TFSI are both tempting for their own reasons. The petrol is the faster and more responsive unit, while the diesel is the more frugal. Both have lots of torque low-down in the rev range, too.

The SQ5 uses a petrol V6 which is scorchingly rapid yet also refined. Ultimately, all Q5s handle with precise, predictable vim and vigour, and are plenty involving enough to make them one of the best cars in the class to drive, even if the Audi does fall short of the BMW X3 or Porsche Macan's properly fun, hot-hatch-like handling.

The basics are covered by a suite of braking and stability aids that do their best to ensure safe steering and stopping at all times. There are six airbags hidden within Audi’s latest passive crash safety technology to divert crash energy around the body and away from the passengers.

It’s too new to have been tested by Euro NCAP but given that the older version scored very highly across the occupant protection categories on the way to a five-star score, the current one is likely to do just as well or even better. Pedestrian protection is now improved, too, with a pop-up bonnet that cushions any head impact. It’s expensive to put back into place, should it eject.

The optional Parking Assistance Pack Advanced doesn’t just let the Q5 park itself and monitor for collisions ahead. It also watches for fast-approaching cars behind and warns if necessary, tightens the seatbelts if a collision is imminent, watches your blind spots and looks behind the car for crossing traffic or pedestrians, which is useful for reversing out of parking bays. There’s even a similar system that watches for passing cyclists just as you start to open your door.

Two no-cost solid colours, one extra-cost pearlescent and 10 optional metallic finishes make up the Q5's colour palette. Ibis White and Brilliant Black are the flat options, Daytona Grey is the sober but classy and attractive pearlescent, while there are some lustrous shades among the metallics.

Manhattan Grey, Floret Silver, Monsoon Grey, Utopia Blue, Moonlight Blue and Mythos Black are all good, but the stars of the show are Azores Green and Navarra Blue. Both are deep colours that look almost black in the shade, but with outrageously lovely metallic fleck that emerges along with the colour in direct sunlight. Matador Red and Java Brown don’t really suit the car and are best avoided.

At the bottom of the range is SE, moving up through Sport to S line and ultimately the SQ5, which is not a standalone model and builds directly on the spec of the S line. SE cars are generously equipped with a seven-inch touch-screen interface, triple-zone climate control, keyless start, two USB ports and lots more.

The highlights of moving up to Sport spec include electric lumbar support, interior ambient lighting and sat-nav, plus Sport seats with more lateral bracing. S line includes an upgrade to 19in wheels, LED headlights and a host of S line body styling and trim upgrades. The S logo is embossed into the leather and Alcantara seats.

SQ5 tops the range with 20in wheels, stiffer suspension, even more S-badged trim, a larger 8.3-inch touch-screen and a 10GB hard drive for music. It’s only available with the 349bhp petrol V6.

The Q5 looks bigger than it really is. On the road it seems huge, but its dimensions are entirely normal for a modern SUV, with the exception of the width including mirrors, which might cause a few problems between driveway gate posts or through garage doors.

Although residual values are predicted to be very good for the Q5, its sheer purchase price will push finance payments up. Servicing is expensive but not outrageous, while the wealth of safety equipment should keep insurance premiums in check.

Fuel economy depends entirely on how the car is driven. Any turbocharged engine is the same, delivering big gains versus normal aspiration when brought up to speed briskly without heavy acceleration. Steady cruising once at speed is what the Q5 thrives on. Heavier acceleration, rough driving and high-speed cruising will see the fuel economy plummet. Around 45mpg is a realistic average for the 2.0 TDI, while 50mpg makes a neat target to aim for.

The Q5 is a technologically complex car, as with most Audis. That hurts the brand’s ability to perform in customer satisfaction surveys, because electrical niggles are not infrequent. Mechanically, though, the Q5 should be solid and long-lasting. Servicing intervals are longer for frequent motorway drivers and shorter for urban commuters.

There is no getting around the fact that the Q5 is expensive. At about £15,000 more expensive than the entry-level Volkswagen Tiguan, not even the Q5’s incredibly clever four-wheel drive system, which it doesn’t share with the simpler Volkswagen, can make up the difference in price.