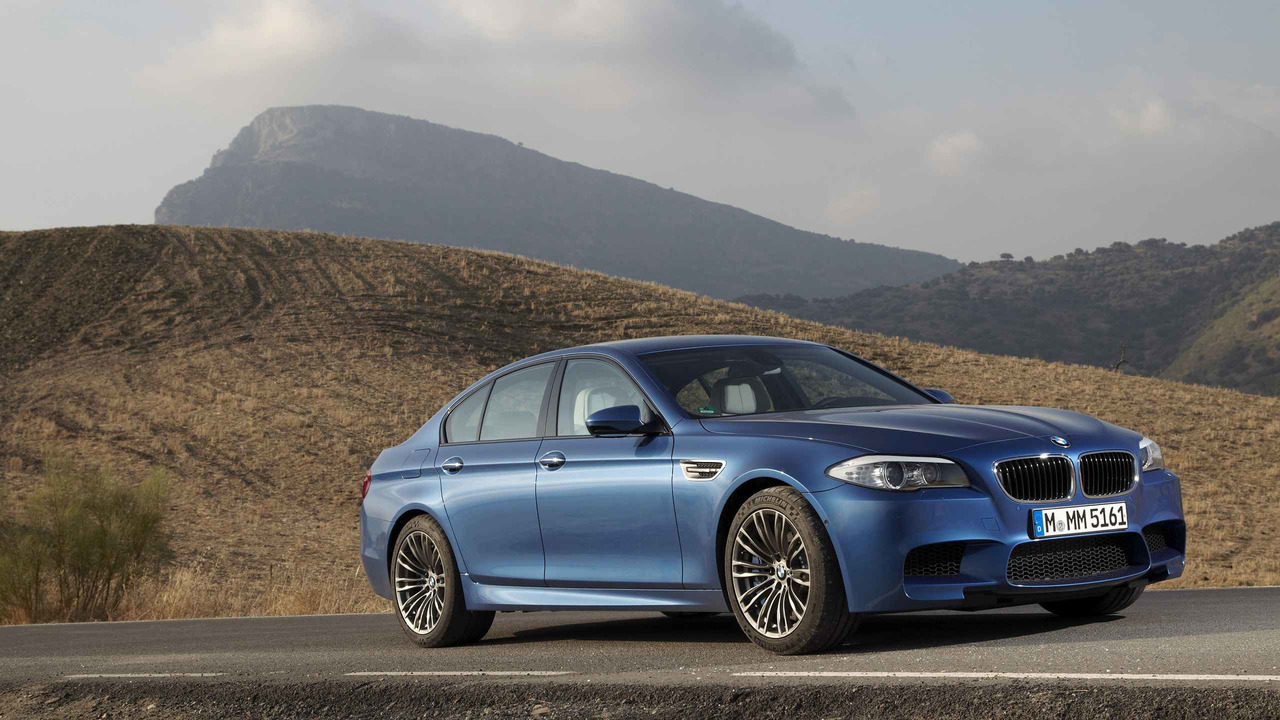 The BMW M5 has always been the high-performance flagship of the evergreen 5 Series executive range. Typically featuring engines that are considerably more powerful than the next model down the 5 Series family tree, M5s have become legendary for their phenomenal speed and handling prowess. This fifth iteration heralded the arrival of turbocharging to the M5 lineage, which brings even more horsepower, a whole lot more torque, and supposedly improved fuel economy. Launched in 2011, the M5 is basically a one-model car, with a special upgrade pack and a couple of limited edition vehicles expanding the range throughout its production life. The M5 is exclusively rear-wheel drive, only comes with a twin-turbocharged petrol V8 mated to a seven-speed M Double Clutch Transmission (M DCT), is available only as a saloon, and has engine outputs of at least 560hp/502lb ft.

Did you know? Until the M760Li arrived in 2017, the 600hp versions of this M5 were the fastest-accelerating road-going BMWs that had ever been made.

This is one of those cases where less is more. This first-ever turbocharged M5, following on from four generations fitted with normally aspirated engines, is no doubt empirically quicker than any of its ancestors, thanks to a massive uplift in both midrange and outright torque. It’s also claimed to be much better on fuel as well. But the reality is that the fifth iteration of the M5 is just as ruinous to run as you would expect of a 560hp+ V8 petrol machine, and while it is certainly an incredibly adept supersaloon, some of the raw thrills and driver rewards of the previous M5s have, regrettably, been sacrificed in the process of chasing on-paper numbers.

Traditionally, M5s are rather more understated in the visual department when compared to their smaller M3 cousins, which favour flared wheel arches, bonnet bulges, and even carbon fibre roofs in certain instances. Having said that, the fifth M5 is perhaps the dullest example of its breed to look upon. All the signifiers are there, such as quad exhausts, large alloys (at least 19 inches in diameter), a subtle boot lip spoiler, and the lack of front fog lights - these last items instead replaced by large air intakes for cooling purposes. The problem is that the 5 Series it uses as a basis was a sober, conservative design after the sharp-suited, ‘Flame-Surfaced’ Five that went before it (2004-2010), and as such the M5 just looks a bit too much like an M Sport-kitted 520d.

The interior of the sixth-generation 5 Series is a high-quality cabin, with a well-ordered dashboard layout, superb fixtures and fittings, and acres of space for all occupants. As with any BMW, the M5’s driving position is inherently excellent, and thanks to electric seat and steering column adjustment, it should suit drivers of all stature. The M5 has leather upholstery with heated sports seats as part of its purchase price, as well as various sporty fascia trims specific to its prestigious status, so the interior is a lovely place to spend some time.

There’s loads of leg- and headroom for adults sitting in the rear, meaning four tall people should be easily accommodated on-board. There are two ISOFIX mountings in the outer rear seats, too, so parents who enjoy driving can use the big BMW as an extreme family car, while the boot is a sizeable 520 litres – strangely, split-folding rear seats were not standard on the M5 to start with, but the '30 Jahre' version did come with this feature for no additional cost.

There’s a decent amount of connectivity equipment as standard on the M5, including DAB radio, enhanced Bluetooth, Voice Control, BMW Professional Navigation, the iDrive infotainment controller, and various BMW connected services. A BMW Loudspeaker audio system was also fitted. Options included a DVD changer, internet capability, Online Entertainment services, a TV function, and BMW Professional Rear-Seat Entertainment. Sound system upgrades were the Harman Kardon system (standard in the 30 Jahre) or the Bang & Olufsen 16-speaker, 1,200-watt, 5.1 surround sound set-up. So the BMW certainly doesn’t lack for technological comforts, although as it came from an era prior to TFT touchscreens and full smartphone integration, it’s going feel a bit dated within to those who like to keep abreast of the latest innovations.

No complaints about the blinding performance of the M5. Even in its ‘base’ specification of the 2011 launch models, 560hp and 502lb ft from its twin-turbo 4.4-litre V8 meant a searing 0-62mph time of 4.4 seconds and a top speed that was limited to 155mph - unless you opted for the M Driver’s Package, in which case it was raised to a (still-restricted) 190mph. Particular critical praise is reserved for the rapid-response, smooth-shifting M DCT gearbox, and the M5’s massive torque – available from just 1,500rpm out to 5,750rpm. Compared to the older model’s lowlier 384lb ft delivered at a peaky 6,100rpm, it transformed the mid-range response of the M5, making it brutally and yet effortlessly quick from any point on the rev counter.

The problem is, it doesn't sound as special as the older V10 and it doesn't explode into the same tremendous, thrilling top-end mania, either. And while it is an extremely well-sorted chassis, the biturbo V8 M5 just feels a little too easy to drive, a little too willing to quickly give up all of its secrets to drivers of any skill level. It is comfier to roll along in for more of the time, thanks to a supple ride quality, which says a lot about the M5’s shift in attitude for the turbocharged model. By the irrefutable, black-and-white recordable data and any objective measure, this fifth M5 is miles faster than any of the older cars. But is it as exciting to drive? Possibly not.

BMW evolved the car via a number of methods during its life-cycle. In 2013, the Competition Package sharpened the M5’s focus. It featured a 25hp power hike, dropping the 0-62mph time to 4.2 seconds, and added firmer, 10mm lower suspension, tweaked the Servotronic hydraulic steering, brought in new control software for the Active Differential and the M Dynamic Mode in the DSC, and also added some styling upgrades in the form of 20-inch black wheels, black chrome exhaust tips, and double-slat kidney grilles.

Then, to celebrate the M5’s 30th birthday, in 2014 BMW released the M5 30 Jahre Edition. It had the Competition Pack but hiked power by a further 25hp, to a peak output of 600hp, while torque marginally climbed too, up to 516lb ft. It was externally distinguished by bespoke Frozen Dark Silver paint, the only finish it came in, and bicolour 20-inch alloys, while within were lots of ‘30 Jahre’ logos and part-Alcantara seats. Just 300 were ever built and only 30 were allocated to the UK, at a cost almost £18,000 more expensive than the regular M5 – but then the 0-62mph sprint was by now down to 3.9 seconds.

Finally, at the end of the M5’s life, the Competition Edition arrived. It was exactly the same spec as the 30 Jahre, although only 200 were made in either metallic black or white paint. And the price of these in the UK was over £100,000.

Originating before the explosion in electronic driver-assist systems, the M5 is not stuffed to the gills with cutting-edge semi-autonomous technology. The sixth-generation did manage to pick up a five-star Euro NCAP rating when it was tested way back in 2010, scoring 100 per cent for safety assist… but, in those dim and distant days, the test requirements to achieve that mark were a lot less stringent. Standard safety equipment included airbags, a tyre-pressure monitoring system, the Head-Up Display, and adaptive headlights. Everything else was an option, but even so, the items that could be fitted only amounted to a lane-change warning system, pre-tensioning seatbelts, a forward collision warning system with pedestrian alert, and a speed limit display. That roster of equipment looks particularly sparse when viewed through the lens of the current car safety climate.

BMW Individual colours include Azurite Black, Champagne Quartz, Citrine Black, Moonstone (silver), and Pyrite Brown, for a fee of around £1,050 each. Freakishly expensive is the Frozen Bronze shade, which has a matt-effect look, while Frozen Dark Silver is reserved exclusively for the 30 Jahre Edition.

There is only one. The M5 comes with items such as adaptive headlights with High-Beam Assist, four-zone climate control, ambient lighting, cruise control, a glass sunroof, Anthracite black headlining, automatic lights and wipers, keyless entry and go, and more, as befits the status of the range-topping 5 Series.

A physically big car, the BMW M5 will need large garages to accommodate its frame and it’s not the ideal car to be piloting around narrow city streets.

No vehicle that weighs two tonnes and which packs a twin-turbocharged V8 with way in excess of 500hp is going to be economical, naturally. But, given that BMW shifted the M5 from normal aspiration to forced induction to provide better fuel economy (and meet emissions regulations), its real-world returns are disappointing. In truth, no one will see 28mpg from the M5, with more like 20mpg being the general rule of thumb (that’s not much better than the preceding variant, with its devastatingly thirsty 5.0-litre V10 motor) and in the order of 12-14mpg if you regularly want to use the M5’s fearsome performance.

It’s also frighteningly expensive to keep in other ways, sitting in insurance groups 48-50 (the highest levels possibly), going through its fat rear tyres like there’s no tomorrow, and requiring elevated maintenance costs that are the preserve of highly specialised performance cars like this. The only saving grace is that the BMW M5 is an immensely desirable car among the diehard motoring fraternity and it’s built in controlled numbers, so its residual values should be high.

Early versions of this M5 had issues with oil pumps, while there were also reports of failures in the high-pressure fuel system, the pump and sensors supposedly the culprit. The M5 also chews through oil at regular, short intervals, while turbos on high-power engines have a limited service life too. In short, the M5 is not a notoriously unreliable car, but specialist vehicles like this are not cheap to run and they require regular, expensive upkeep.

Service Inclusive or Service Inclusive Plus covers either just servicing costs or servicing and maintenance costs, respectively, for five years or 50,000 miles. Like most modern BMWs, the M5 has a condition-based servicing system in which the car signals when it needs to go into the garage for maintenance, according to how it has been driven.

Regular M5s started at almost £74,000, the Competition Package upgrade adding nearly £7,000 more to that figure, thus taking M5s so equipped past the £80,000 barrier for the first time. In 2014, the 30 Jahre Edition cost an extraordinary £17,930 more than the car on which it was based, with a £90,000+ price tag – but the ultimate expense goes to the run-out Competition Edition special. This was essentially just the 30 Jahre, but limited to a 200-off production run in metallic Carbon Black or Mineral White, half the allocation finished in each hue. The fee in the UK? A terrific £101,000.