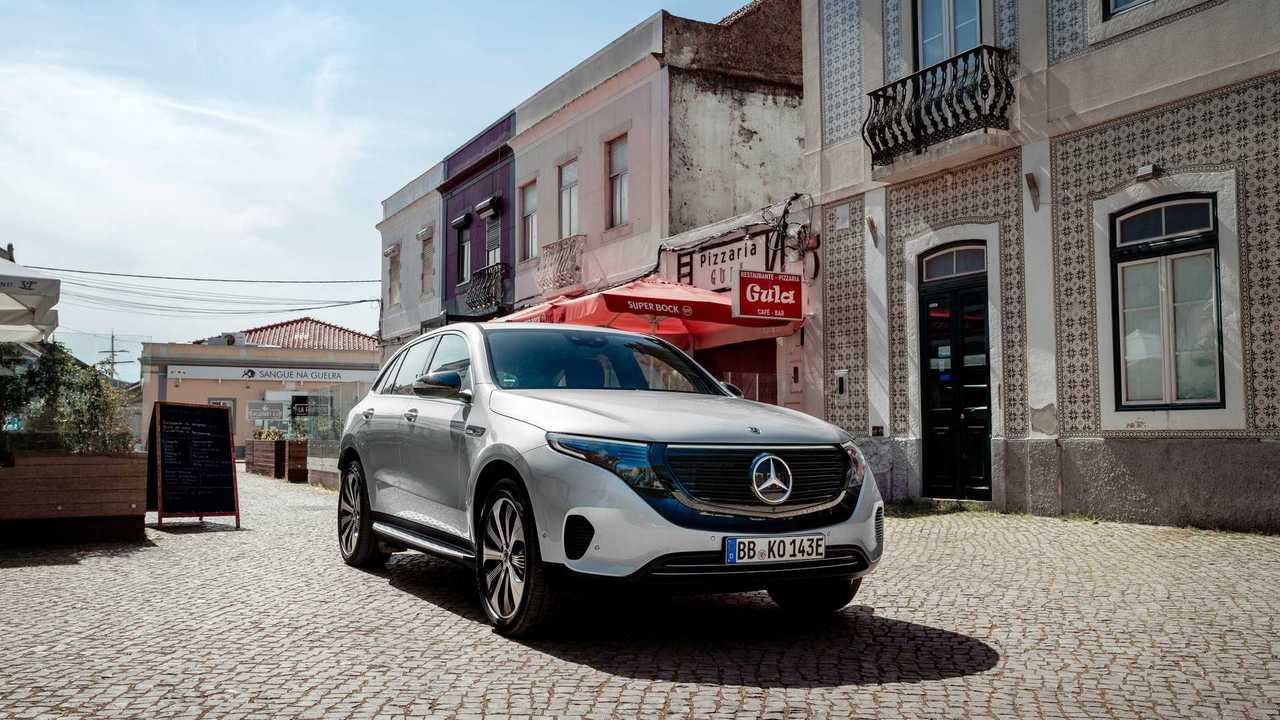 The first examples will hit UK roads in July.

Mercedes-Benz’s new electric SUV - the EQC - has gone on sale in the UK with prices starting at £65,640.

Powered by an 80 kWh lithium-ion battery, the Jaguar I-Pace and Audi e-tron rival will arrive in the UK in July boasting a 259-mile range and 402 bhp. That means it’ll tackle the sprint to 62 mph in a smidge over five seconds, while the top speed is 111 mph.

More on the new Mercedes-Benz EQC:

Mercedes kicks off production of EQC in Germany

The sub-£66k asking price buys you the ‘base’ variant - the EQC 400 Sport - which comes with a reversing camera, heated seats and 19-inch wheels, as well as two 10.25-inch screens that sit side-by-side. One of the two digital displays replaces conventional dials, while the other acts as the in-car infotainment screen. However, working in tandem with Mercedes’ MBUX system, the two can be customised to display pretty much whatever the driver or passengers would like.

According to Mercedes, the navigation system is also capable of finding nearby charging stations and planning routes around charging points, choosing the fastest charging times, as well as faster roads. Other, more conventional standard features include keyless start, heated seats and electro-pneumatic lumbar support, as well as LED headlights and a choice of 64 interior ambient lighting colours.

Upgrading to the £67,635 AMG Line variant adds an AMG black radiator grille, AMG sports seats with leather upholstery and carbon-fibre trim. The AMG Line car is also marked out by the running boards below the doors and its larger 20-inch alloy wheels.

Above the AMG Line variants are two further options: the AMG Line Premium and Premium Plus models. The Premium is, unsurprisingly, the cheaper of the two, with prices starting at £72,280, and that adds an electric sliding sunroof, a Burmeister surround-sound system and wireless charging to the mix. Augmented-reality navigation is also included with Premium models, which overlay navigation directions on a live view of the road ahead in the navigation display.

All those features come as standard in the £74,530 AMG Line Premium Plus model, although that extra £2,000 or so also buys you a head-up display, 360-degree parking camera and memory settings for the seats.

Finally, there are two special edition models to celebrate the arrival of the new model. The lesser of these, the Edition 1, is based on the entry-level Sport trim but adds a host of choice options. The sliding sunroof is included, along with leather upholstery, the augmented reality navigation and wireless phone charging. Externally, the £74,440 car gets 20-inch alloy wheels and the choice of black or white paint.

Alternatively, though, you can have the Edition 1886 model, which features all those accoutrements, plus the 360-degree parking camera and head-up display. And the sum total for all that kit? A massive £79,260.