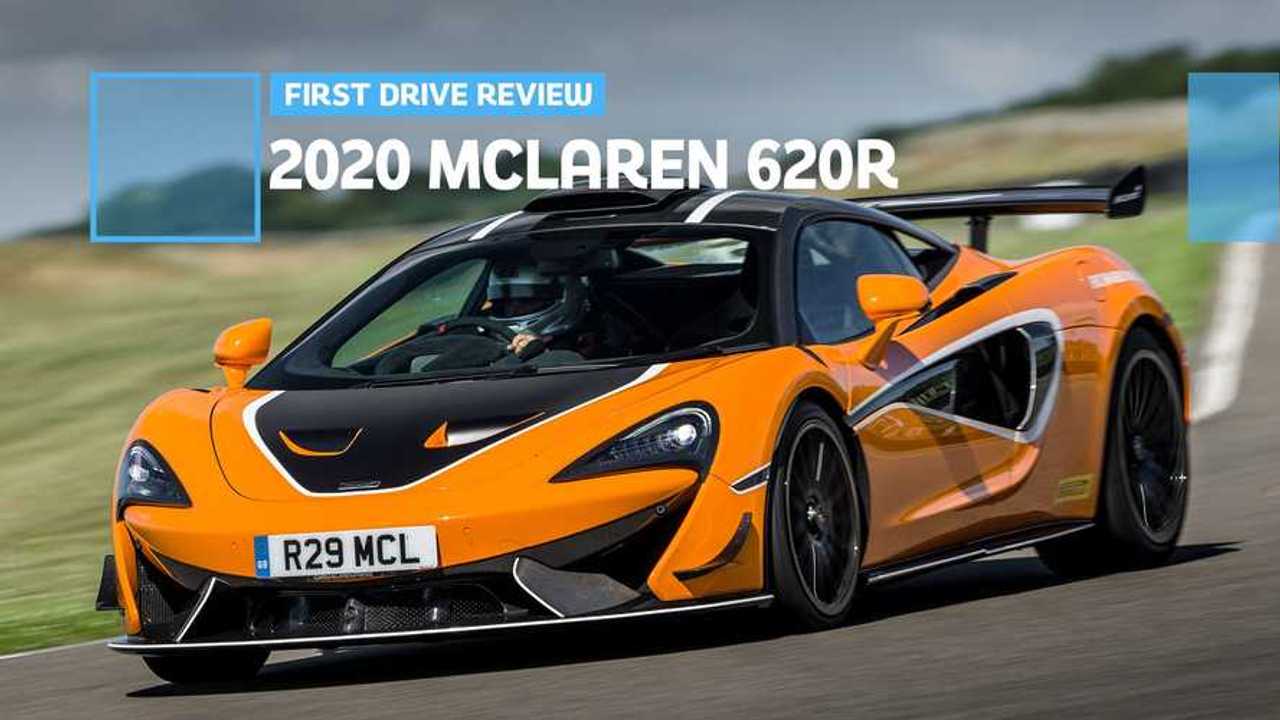 McLaren’s latest special takes 'race car for the road' to the extreme.

"The lights will go red, green, and then blue. When you see the blue, change up a gear."

With my right foot hard down, it didn't take very long for the lights to appear as promised by the McLaren factory driver in the seat next to me. The growing roar of the twin-turbocharged 3.8-litre V8 engine came with the arrival of the red light, but before I even had a chance to remember what colour was coming next, the turbos kicked in and we surged forward as I muttered some expletives under my breath.

It was both exhilarating and frightening to think that less than an hour ago, I'd been in the same car on the public road not quite aware of what it was truly capable of. The car in question is the McLaren 620R, essentially a road-going version of the British manufacturer's highly successful 570S GT4 machine from 2017, and in many ways, the 620R is its more refined, freer younger brother, unrestricted by various championship regulations that limit the true potential of the GT4 car.

As chief designer James Warner recalls when McLaren first considered the concept at the end of 2018: “If we remove some of those constraints that we have on the GT4 balance of performance, what level of performance can you get to and how can you pour all of that together into a car you can also use on the road?”

Before embarking on a test drive it's clear that this isn’t just a copy and paste job from the 570S. Yes, they look similar, but the devil is in the details, as McLaren has modified or redesigned all the components. The adjustable rear wing is slightly taller, and features a rear-brake light and has radius edges to make it road-legal. However, it still offers an incredible 408 pounds of downforce, while the reprofiled front splitter works with the new carbon fibre hood inlets to help generate 143 pounds of downforce on the front axle.

All of this is built around a carbon fibre chassis featuring a seamless-shift seven-speed gearbox, while the aforementioned engine is capable of producing 612 bhp, a top speed of some 200 mph, and a 0-124 mph time of 8.1 seconds.

Inside, the minimalist interior is actually a pleasant and well-presented environment with optional extras that include an audio system and air conditioning unit. Door pull straps and a raised centre column mean that even when the six-point racing harness is holding you in place, everything is still in reach – simple things, but practicality is often overlooked in some family saloons, much less a supercar.

Surprisingly, the first thing that becomes apparent out on the road is how quiet the 620R can be. In Normal/Normal (one setting controls the electronic stability control, the other the throttle response, gearshift and exhaust note) the car is quite happy rolling along in seventh gear, and despite the sheer grunt of the engine, you would be none the wiser of its potential until you give the loud pedal a bit more application. The low seating position does take a little while to get used to – a feature of any supercar/race car – but visibility, especially through the side windows, is surprisingly good.

Through the bends the chassis is more than up to the challenge. The 620R has GT4 two-way manually adjustable coilover dampers with up to 32 different settings, but even on a middling setting, a brief trip over some rumble strips approaching a roundabout certainly grabbed my attention. You can feel everything through the seat of your pants.

But the ride was not unpleasant, and it handles the various bumps and undulations along winding A-roads well enough. But they are certainly noticeable – again, another trait of supercars and perhaps a necessary compromise given the 620R's track pedigree. By the end of the 70-minute drive though, apart from being relieved to have made it back in one piece (who wouldn't think that when driving a six-figure supercar on the road?) there were no aches and pains – a testament to the comfort of the carbon fibre racing seats.

The previous 50 miles had indeed confirmed that, yes, this is a perfectly functional road car, but let's not beat around the bush here. This is a car meant for the track, and oh boy, does it deliver.

Seated alongside to help me coax the maximum from the car was McLaren factory driver Joe Osborne – a man with plenty of GT experience and success – and our venue was the Snetterton 300 Circuit, an ideal setting with a mix of slow, medium, and high-speed corners split up by lengthy straights to test the true capabilities of the car.

With Osborne's voice ringing in my ears and using the full rev range (red-green-blue, remember) it didn't take long to realise what kind of car this is. It's the gift that keeps on giving, allowing you to hit the brakes deeper into corners, pick the throttle up earlier, and carry more speed through the bends.

All the gizmos and electronics make the 620R feel planted when you put your foot down (even in Sport or Track settings), quelling fears that a car with such power will spit you off at the slightest overstep. The front starts to understeer slightly if you begin to ask a little too much through the corners, as if politely telling you at over 120 mph that, sorry, there's just a bit too much speed there.

That's certainly not to say the 620R can't handle speed through the turns though. Anyone who has been to Snetterton before will know that Coram – the long, never-ending right-hander toward the end of the lap – is a pain in many cars, with understeer often making it a struggle to stay on the inside line. In the 620R, it was me who was struggling to hold on as my body was thrust to the left-hand side of the car while it had no trouble at all hugging the white line through the entirety of the corner, perfectly balanced with just the slightest play in the throttle.

What helps here are the specially designed slick Pirelli tyres, which for track activities can replace the road-legal Pirelli P Zero Trofeo R tyre, giving it even more grip and performance.

The brakes, carbon ceramic discs with forged aluminium brake calipers, inspire confidence with their incredible stopping power and consistency. And let's not forget, these aren't solely racing brakes either, which just wouldn't be functional on public roads due to the need to get them working in a certain temperature window.

In the space of two 20-minute sessions I'd begun to feel I was extracting a lot of performance from the car – and embracing every minute despite being hurled from side to side and back to front by its sheer ferocity. Okay, so I had a McLaren factory driver talking me through every turn but regardless, the 620R is a car that will allow even racing enthusiasts with limited experience the chance to comfortably build up to a competitive limit and hold it there. And that's exactly what Warner envisaged when he set out on the concept less than two years ago.

"We don't want a car that only the top one percent of drivers can get the performance out of it on the track because we wanted something that was accessible for everybody,” he says. “So somebody could turn up at a track they haven't driven at before, driving the car for the first time and they immediately get out on the track and start finding it rewarding and forgiving."

At a cost of £250,000 and limited to a run of just 225 cars – down from the original 350 due to the coronavirus pandemic – it's going to be rarer than seeing a Ferrari victory in Formula 1 this season.

But if by some miracle you ever get the chance to have a go in one, don't even think twice about it. Just remember it's red, green, and blue.