The Ferrari of plug-in hybrids.

Few things can match the joy of an Italian supercar, painted in the country’s iconic Rosso Corsa, wearing a yellow coat of arms on its wings/fenders. One of those things, though, is an even more powerful, more advanced redhead than ever before.

The 2020 Ferrari SF90 Stradale is just that: it represents the best that Maranello can offer today, with nearly 1,000 bhp courtesy of three electric motors and twin-turbocharged 4.0-litre V8 V8. What this car gives you when you drive it is all the thrill of a Ferrari, but with an electric jolt that makes it drive like nothing Italy’s most iconic automaker has built before. It’s thrilling in a way that blurs your senses.

The design team, led by Flavio Manzoni, not only took this car’s links with Ferrari’s high-tech racing cars (it bears the name of a Formula 1 single-seater), but also took inspiration from the world of boats and spacecraft. But behind the influence of these modern things, Manzoni and his team defined the shape of the bodywork by careful subtraction of volumes, as in sculpture.

To describe the general layout, one can start from the V-shaped front end, which generates a sort of slingshot-like shape when viewed from behind. The headlights, Ferrari’s first LED matrix units, give expressiveness to the eye with unusual horizontal slits, while two aeronautically influenced cantilevered fins add to the look. Lower down, there are other slots, this time for cooling the massive brakes and – in the lower part of the bumper – to cool the electric core of the car, leaving sockets on the sides that cool the thermal elements.

Unlike other Ferrari berlinettas, such as the 360 Modena, the roof and wheel arches no longer seamlessly connect to the rear window. Instead, the faintly cab-forward design and low sides accentuate the shape and almost hide the rear window from the car’s proportions. The brilliant Rosso Corsa paint helps camouflage the shape of the window, too.

The rear spoiler sits low on the body, so as not to dirty the car’s aesthetic, but not so low that it doesn’t contribute to the SF90’s impressive amount of downforce. The four rear lights look as if designers shaped them by cutting Ferrari’s traditional round lamps into slices – the result is rings with a three-dimensional effect. The shape of the diffuser is reminiscent of a trimaran, a look created in part by the colour contrast in the bodywork and the high position of the tailpipes – the positioning of the twin tips is also a benefit to the engineers, who have a more direct exhaust line.

The aeronautical inspiration continues in the cabin, with a cockpit-like layout that surrounds the driver and features a new, all-digital interface.

With the instruments switched off, the screens are perfectly black, almost as if Ferrari put them there so as not to dirty the design. Start the engine and they come alive – the dashboard display, a first for a production Ferrari, is a curved 16-inch screen, showing the commands given by a steering wheel that now incorporates touch controls

And in all this modernity, there is a reference to Ferrari’s historical manual transmissions – the controls to select Reverse, Automatic, Manual, or Launch for transmission feature the shape of a dog-leg, H-pattern four-speed transmission. Beyond those features, all the elements with a technical function in the cabin feature carbon fibre, upholstered with typical Italian upholstery – the lack of metal structure in things like the seats is meant to reduce weight while improving ergonomics.

You can see the stats and figures for the SF90’s performance at the bottom of this piece, but those numbers fail to convey what driving this car is really like. You have to drive it with a long throttle, managing the epic thrust under your right foot and keeping the gears high.

The torque of the three electric motors makes for a formidable combination with the twin-turbocharged V8’s 780 bhp and 590 pound-feet of torque, especially in the lower part of the rev range. The electronic management of the delivery, which in low gears imitates a naturally aspirated engine to reduce response times, makes full use of the V8’s boost at higher engine speeds.

The two front electric motors work to ground all this fury in the bends, giving more torque to the outer wheel and less to the inner, allowing the driver to plot trajectories that the brain can hardly imagine. This is most noticeable on track, where the intelligent all-wheel-drive, along with the smart electronics, allow the driver to exploit the performance in a way that feels natural. Even in the wet, you’ll feel like a hero.

Ferrari’s electric revolution extends to the brake-by-wire stoppers, which are impressively easy to modulate, considering that there’s both very little pedal travel and a regenerative function to contend with.

Modern Ferraris have taught us to expect comfort in their suspension tuning, despite the handling abilities. The SF90 Stradale is no exception. Just press the little damper icon on the steering wheel to soften the response of the electronic shocks and you’ll be able to pass over asphalt that’s far from perfect with ease.

The SF90 does even more to work around town, with its 8-kilowatt-hour battery affording up to 15 miles of range and a top speed of 84 mph. If you select the hybrid driving mode instead, that big twin-turbo V8 stays silent more often than you’d think in normal traffic. In these conditions, the rear electric motor packs 220 bhp and 196 lb-ft of torque, while each of the front engines can give up 134 bhp and 63 lb-ft.

How Much It Costs

Editor’s Note: This story is a translation from a review originally published by Motor1.com Italy. All performance figures reflect the Italian market SF90, while prices used the exchange rates at the time of publication. You can find the original piece here. 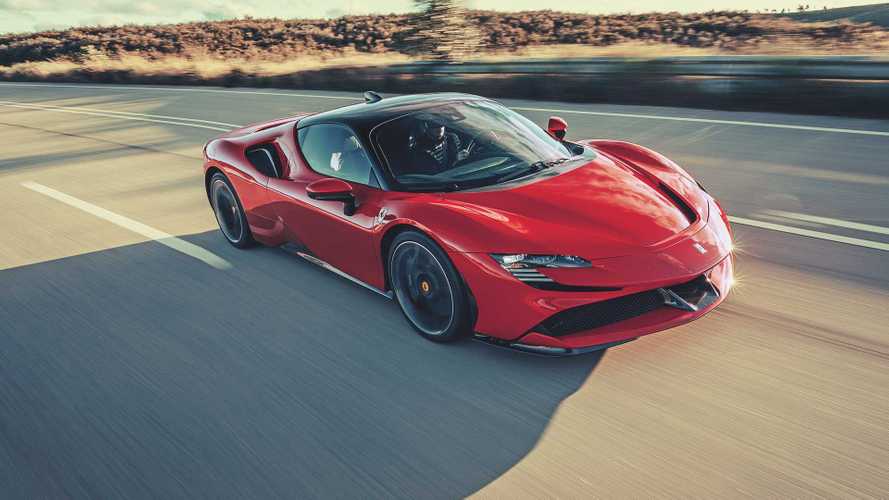