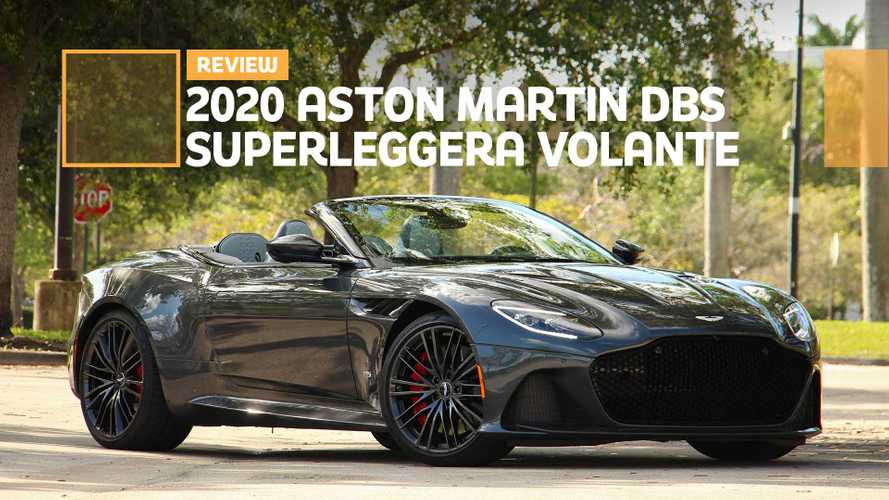 A V12-powered convertible with scary speed.

Head west from Florida's Atlantic beaches and eventually you'll find Alligator Alley. The four-lane, 80-mile stretch of asphalt cuts a direct path through the Everglades (hence, the name), connecting east coast to west. And even in a state notorious for its boring roads, the arrow-straight Alligator Alley is duller than most – so it takes a truly extraordinary car to appreciate it at all. Say, a six-figure convertible hailing from the UK.

The Aston Martin DBS Superleggera Volante is that car. With the East Coast in our rearview, we head west toward the Alley in the torque-loaded, 211 mile-per-hour British bomber. And once there, the Aston converted this monotonous Florida motorway into its own personal drag strip, keeping mind of state troopers along the way.

Lurking under the Aston's curvaceous clamshell bonnet is a German-built, twin-turbocharged 5.2-litre V12 – same as in the DB11 AMR. Only here that engine gets an extra 4.4 psi of boost (29 versus 24.7), pushing the Superleggera's total power figure to an earth-moving 715 bhp and 664 pound-feet of torque. And the way this Aston produces power is incredible – slightly frightening, even.

Tick the drive mode selector on the steering wheel to Sport Plus, mash the accelerator pedal, and hang on. An empty lot off the main drag allows us to test the Superleggera Volante’s quoted 3.6-second 60 time. But instead of ripping a sweet, sub-four-second sprint, we instead watch the rear Pirelli P Zeros (265/35 ZR21) spin wildly and the traction control warning in the gauge cluster light up like a Christmas tree.

Credit Aston engineers for trying to curtail torque, limiting it through first and second in this drive mode, but it's still not enough. The DBS Superleggera has so much outright power that it seldom gets off the line cleanly. Though, all that tyre spinning sure makes for some fun, at least.

Once back on the main stretch, the Superleggera pulls like a freight train, even into third, fourth, and fifth gear. A small poke at the accelerator (even at 70 mph) shifts the weight to the rear and sends all 664 lb-ft of torque to the back tyres instantly – and in the process, our heads firmly into the headrests. Credit the upgraded ZF eight-speed for its ability to cope with this newfound power. Assuming you're on the right road (read: Autobahn), the DBS won't stop until it hits 211 miles per hour. We certainly didn’t get anywhere near that speed, but we’ll trust Aston Martin.

It’s off the highway, on a snaking side road, where the Aston shows us its more athletic side. This certainly isn’t Angeles Crest, but the hulking Superleggera’s sublime steering feedback and quick front end make quick work of the curving asphalt. There’s an elegance in how the DBS Volante moves, despite noticeable body roll and an eight-speed autobox that isn't totally decisive. The DBS still does its best work on long, flat highways, granted – but this 1,863 kg (4,108-pound) convertible does a well enough on the twisties, too.

There's really no other way to put it: the Aston Martin DBS Superleggera Volante is freaking beautiful. Its gaping black hole of a grille gives it a menacing face, and its chiselled profile and extra-wide hips are straight automotive pornography. But our favourite touch is a subtle "Superleggera" script atop the bonnet, denoting its ultra-fast nature. The DBS Superleggera is one of the most beautiful Astons – scratch that, one of the most beautiful vehicles we've ever driven.

Just make sure you order your Aston in a better colour. This particular car's Xenon Grey exterior and matching grey cloth don’t do enough to highlight the Superleggera’s stupendously gorgeous exterior. This car deserves something more eye-catching, like Lime Essence or Ceramic Blue.

We could talk all day about the Superleggera's stunning exterior. But as for the cabin, it's almost too pedestrian for a car of this calibre. Don't get us wrong, there are some extremely nice touches: the hand-stitched, two-tone leather seats are phenomenally finished and ultra-supportive, and the matching electronically opening centre console looks great. Plus, there's a nice carbon fibre insert that cascades down the front of the dash behind the centre screen.

But the flat-bottomed steering wheel and a big chunk of the dash wears some pretty simple black leather that doesn't look or feel great as what you'd get in, say, a Rolls-Royce or Bentley. The buttons on the steering wheel only respond to inputs when they truly feel up to it, and the Mercedes-ripped centre screen running outdated COMAND software just looks… sad. Though, it’s still a lot better than what came before. And thankfully, you can pull out your checkbook and ping Aston's Q division to gussy up some of those less impressive finishes. We recommend it.

As with any large touring car, the Superleggera Volante is pricey – pricier than most. The droptop starts at £247,500 in the UK, whereas a comparable Bentley Continental GT Convertible costs £176,000, a BMW M8 Convertible costs £130,470, and if you really want to stretch the comparison, the Rolls-Royce Dawn will set you back £290,190. But the Aston is the better performer of the four, and in this segment, money is no object anyway.

The Aston Martin DBS Superleggera Volante is a jaw-dropping, absurdly powerful, V12-wielding rocket ship that makes even the most mundane roads feel fun. It even surprised us with decent agility and impressive comfort levels over long stretches (in the right drive setting). Granted, it’s not perfect – but when you’re doing 200 mph with the top down, everything else is meaningless.