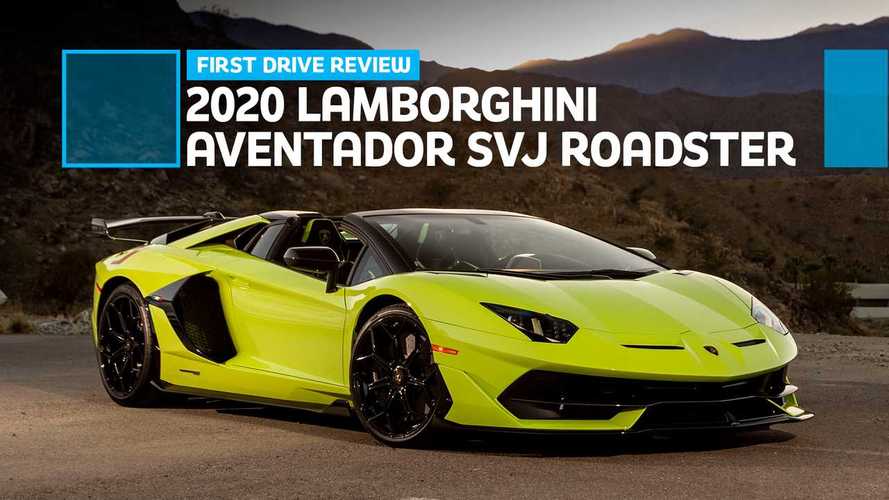 From a technical standpoint, the Aventador SVJ Roadster feels like a mixed message.

The “Super Veloce Jota” iteration of the 2020 Lamborghini Aventador is the most track-focused variant to date. Back in 2018, the Aventador SVJ stole the Porsche 911 GT2 RS’s thunder by posting a 6:44:97 lap time around the Nurburgring, making it the fastest production car around the famed German race track – a record that still stands.

Getting the Aventador to post a number like that took more than just sheer horsepower, though. The battle for supercar bragging rights is more heated than ever before, so in order to dust everything from the Radical SR8LM to the Italian automaker’s own Huracán Performante, Lamborghini needed to sharpen every aspect of the Aventador’s dynamic capability. Grip, aerodynamics, and suspension tuning needed to be as uncompromised as possible in order to tame a road course as demanding as the Green Hell.

And by that line of logic, chopping the SVJ’s roof off seems a bit incongruous with the original mission. Doing so affects the structural rigidity of the chassis, which in turn necessitates additional bracing, and that equals more weight. It’s also safe to assume that the open cockpit isn’t doing the car’s aerodynamic efficiency any favours.

But does that matter when the wind is whipping through your hair and the naturally-aspirated V12 situated just behind you is howling its way to 8,500 rpm? Absolutely not.

While the Roadster configuration might seem counterintuitive to a model that emphasises performance capability, it’s important to remember just how high the bar was originally set with the Aventador SVJ coupe.

Let’s start with that 6.5-litre V12. Aided by revised cylinder head ports, reworked intake runners, and new titanium valves, the naturally aspirated mill produces 760 bhp and 720 Nm (531 lb-ft) of torque, making it the most powerful production V12 in Lamborghini’s history. Teamed with a seven-speed single-clutch automatic transmission and a fourth-generation Haldex all-wheel drive system, the powertrain offers enough grunt to get the drop-top from a standstill to 62 miles per hour in a scant 2.9 seconds, on the way to a top speed of 217 mph. That puts the Roadster just a tenth of a second behind its hardtop counterpart in the sprint to 62 mph (100 kmh) while matching it outright in terminal velocity.

The minuscule discrepancy in straight-line performance is thanks in part to the roadster’s roof, which is constructed from high pressure RTM carbon fibre. Removable by way of quick-release levers in the cabin, the two-piece top weighs just 12 kg (26 lbs) in total and fits in the frunk. All in, Lamborghini says that the Roadster gains 50 kg (110 lbs) over its fixed-roof counterpart. That’s not nothing, but at this level of performance, you’d be hard pressed to tell the difference in any context outside of repeated laps around a road course.

As with the SVJ coupe (and the Huracán Performante before it), Lamborghini’s latest active aerodynamics system is on hand to bend the air to your every whim. Here, Aerodinamica Lamborghini Attiva 2.0, to use the company’s official name for the system, employs motor-actuated flaps at the front and rear of the car to strategically direct airflow over the front splitter and rear wing in a manner that not only increases downforce or minimises drag, depending on the situation, but also directs airflow to different sides of the car to create an ‘aero vectoring’ effect. By increasing downforce to the unloaded inner wheels in high speed corners, the system improves stability and reduces the steering angle required to keep the car pointed where you want it through a given corner. Standard rear-axle steering further aides the Aventador SVJ Roadster’s impressive cornering ability.

Although the Roadster’s cabin doesn’t dramatically deviate from the coupe’s, it too brings a sense of occasion to the proceedings. It’s not only the heavily bolstered sport seats and jet fighter-esque instrument panel, though; subtler elements, like the real-time information about the ALA system on the digital dashboard display, never let you forget that you’re in something special. Although the non-touchscreen infotainment system looks and feels dated on the cusp of 2020, the fact that it’s Apple CarPlay compatible makes it significantly more useful than one might expect.

The Roadster also gets an electronically retractable rear window which acts as a wind barrier when up. Meanwhile, lowering it allows more of the sweet sounds from the SVJ’s central-exit pipes to reach your eardrums.

Even before we settle in at the helm, expectations are high. Whether dressed in Verde Scandal or the comparatively understated Bianco Opalis hue, the Aventador SVJ Roadster’s aesthetic is the very definition of extroverted. Even at rest the car’s wild aero elements and massive scoops are hard to ignore. Bring the engine to life and the rowdy exhaust system ensures that anyone who previously wasn’t paying attention to the Lambo is now.

We started off in Rancho Mirage, California, just outside of Palm Springs, and headed for the winding tarmac surrounding San Bernardino National Forest. As with all currently available Aventador models, the SVJ Roadster is outfitted with four selectable drive modes: Strada, Sport, Corsa, and Ego, the latter of which allows you to mix and match your preferred settings from each of the other three modes.

Since our time in the SVJ coupe was solely on track, we start off in Strada to get a sense of how Lamborghini’s most aggressive drop-top handles everyday driving situations. In the car’s most relaxed mode, the track-tuned suspension proves surprisingly compliant considering the SVJ’s track-focused mission. You definitely won’t mistake it for a Bentley, but the harshness we expect from a track-tuned system was largely absent through all but the most pock-marked asphalt.

Driving in Strada mode reveals a different issue that has dogged the Aventador since its introduction.

But driving in Strada mode reveals a different issue that has dogged the Aventador since its introduction. Although Lamborghini has made efforts to refine the Aventador’s single-clutch automated manual transmission over the years, it feels two or three generations behind the curve in an era of highly competent dual-clutch transmissions (including Lamborghini’s own seven-speed found in the Huracán). Pronounced gaps in power delivery when the transmission swaps cogs on its own makes the car feel wholly out of its element under normal driving conditions. We eventually decided to simply shift manually around town, providing a tangible improvement in the gearbox’s operation.

Once we ventured out onto the twistier bits of State Route 74, though, the benefits of the single-clutch auto became more obvious. It’s a gearbox that works best when on full boil, where it dispatches each shift with consistent immediacy and ruthless authority.

On fast, rural stretches of highway, the Aventador SVJ simply devours the road like few cars can, urging you to wind its V12 past 8,000 revs and well into potentially-felonious territory. With the top down, it’s damn-near impossible to resist. Pace piles on effortlessly until you glance down at the dash and see jaw-dropping numbers on the display.

It should also come as no surprise that the Aventador SVJ Roadster is a monster in the corners. Despite a curb weight that nears two tonnes, the SVJ is simply unshakable, with wide Pirelli PZero Corsa tyres providing massive grip and the rear-wheel steering helping to tuck the front-end into curves. We actually prefer the Sport drive mode over the track-focused Corsa at higher speeds, not only for its well-tuned damping, but also for the less-sensitive throttle response, which makes it easier to corral the copious amount of power at the beck and call of our right foot.

At the end of the day, what’s clear is that this supercar delivers on the promises made by its aesthetic. Whether you’re going hell for leather on your favourite stretch of road or just headed out for a leisurely cruise, there’s never a moment where you (or anyone near you) forgets that you’re behind the wheel of an Aventador SVJ. In Roadster form, that experience is only amplified.

Lamborghini will only build 800 examples of this drop-top, and it may prove to be the swan song of the Aventador as we know it. With electrification an oncoming inevitability, those with the means who value the simple pleasures of a screaming, track-tuned V12 in an open-top machine that’s unencumbered by modern powertrain complexities would be wise to embrace this jaw-dropping supercar anachronism while they still can.