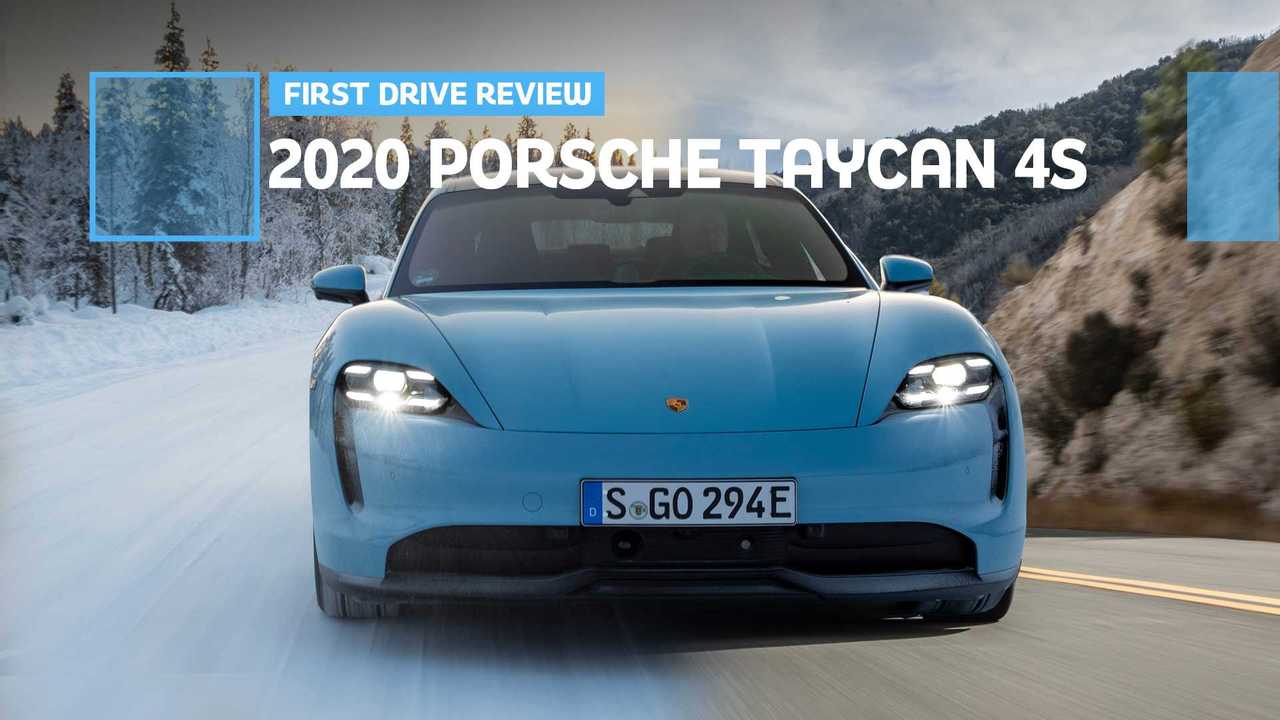 On tarmac and ice, the Porsche Taycan 4S dazzles.

We drove the Porsche Taycan Turbo and Turbo S models in Europe and walked away thoroughly impressed. The brand's first electric vehicle is a serious contender in range-topping form. But following the Taycan 4S debut at the LA Auto Show, Porsche invited us on a different sort of adventure to experience the entry-level Taycan on road: One car. Two editors. Opposite sides of the planet in completely different conditions.

Associate Editor Clint Simone hit the canyons of Los Angeles to test the Taycan 4S, while Senior Editor Jeff Perez flew to northern Finland to get a feel for the car in the ice and snow. In both scenarios, the base (at the moment) Taycan proves it's still plenty capable, despite a more-affordable price.

Though the 4S is the most "affordable" of the Taycan trim levels, it feels anything but ordinary. Power is the biggest difference between this new variant and its big brothers, the Turbo and Turbo S. But even as the entry point for the Taycan line, the 4S has some impressive specs: up to 482 bhp (or, 522 with launch control engaged), zero to 60 miles per hour in under four seconds, and an “entry-level” starting price of £83,367. And who said electric cars are boring?

Angeles Crest Highway sits about 16 miles outside of downtown Los Angeles, draped along the San Gabriel Mountains. It’s one of California’s best driving roads and serves as the perfect playground to sample Porsche’s silent sports car. In this case, a Taycan 4S with the optional Performance Plus package using the larger 93.4-kilowatt-hour battery pack from the Taycan Turbo and Turbo S. Here it produces 482 bhp and 479 pound-feet of torque, or up to 563 bhp with overboost and launch control, which is standard on all models. The standard Taycan 4S uses a 79.2-kilowatt-hour battery and produces just 429 bhp and 472 lb-ft.

Even though it’s cold for a November day in LA (not compared to Jeff’s Finland drive, but you get it), the two-ish hours spent on the road come without rain. After getting some heat in the brakes and the tires, I push the Taycan just a bit harder through the Crest’s array of sweeping left and right-handers. Piloting a car equipped with the bigger battery pack, the 479 lb-ft of torque is hard to ignore. Brake with plenty of time, turn in sharp for the corner, accelerate hard out of it. Over and over again. The process becomes more tantalising as we climb further, gaining familiarity with the Taycan and pushing it slightly harder. With its centre of gravity down so low, the Taycan feels extremely planted around corners, showing off very little body roll. And with power going to all four wheels, the 4S uses its big Michelins effectively, showing off its wonderful ability to grip like hell.

Though acceleration is impressive both at high and low speeds, as is usually the case with EVs, it’s the initial acceleration that brings the most joy.

The Taycan's steering is handily the best of any electric vehicle – every Tesla model included.

Just as joyful is the Taycan’s sports car-like steering, which is handily the best of any electric vehicle – every Tesla model included. It’s heavier than you might expect but responds well to inputs without being overly twitchy or uncontrollable. The biggest compliment to pay the 4S is that the relationship between the driver, go pedal, and the steering wheel is no worse off because the car is electric. If anything, it’s an exciting new take on the traditional driving pleasure you’d expect of a Porsche. Of course, you lose some of the visceral feedback from a petrol-burning engine, but the relentless torque provides enough thrills to make up the experiential deficit.

And even when doing some proper canyon carving, the 4S exhibits impressive ride quality. Twisting the steering-wheel-mounted controller to Sport and Sport Plus mode firms up the Taycan and lowers the ride height, but doesn’t make it harsh. If anything, the difference in drive modes brings too little change to the vehicle’s driving character. But it’s a fine consolation, considering the Taycan’s solid ride quality.

As our convoy of Taycans reaches the end of the twisting highway, we head to an Electrify America charging station located at – wait for it – a Walmart. Lined up at the chargers, the powder blue Porsches truly look space-age outside of America’s most common retail store. Our journey from downtown Los Angeles, up the Crest, and back over to Burbank, CA leaves us with nearly 100 miles of range depleted. In reality, we cover just over 70 miles, and do so, well, on the quicker side of things. After topping off the batteries, the Taycans make their way to a shipping container, destined to meet the second group of journalists in the Arctic Circle.

The weather of northern Finland in December is nothing like the temperature of southern California, not that you should have expected as much. But in Levi, a sleepy ski town 100 miles inside the Arctic Circle, the below-freezing temperatures show off the Taycan 4S’s versatility.

I’m driving the same exact model as my colleague: a Taycan 4S with the optional Performance Plus package, good for 482 bhp and 479 pound-feet of torque (or 563 bhp with overboost and launch control). The company shipped this car east just a few days after our journey with it in LA.

The normally short trip to Porsche’s ice driving facility takes two hours. Leading us from the hotel, through the woods, and around some snow-covered twisties, we drive the Taycan 4S in some of the most brutal weather Finland has to offer. With freezing rain pelting our car from the moment we set off, this is no Sunday stroll.

Our Taycan 4S is the one you want in conditions like this.

About a half-inch of snow covers the narrow roads (more sits on the side of it) just outside of town, and there’s little to indicate where one lane ends and the next one begins. Occasionally we have to force the Taycan into deep snow ruts on the side of the road to avoid oncoming buses and tractor-trailers.

But visibility from the driver’s seat, at least, is great. Even with ice building up on the windshield, we navigate oncoming traffic and other road hazards with confidence. And after just a few minutes, it’s obvious that this Floridian has little to fear in these extreme, other-worldly conditions with the Taycan doing most of the hard work.

Our Taycan 4S is the one you want in conditions like this. With the optional Performance Plus package, it comes with rear-axle steering, dynamic chassis control, and advanced torque vectoring. And like all Taycan models, the 4S uses a dual-electric-motor setup that sends power to all four wheels.

We corner confidently knowing that the Taycan, as equipped, won’t kick out on us too dramatically. Even though the lane markers are vague, the steering isn’t. With help from the rear-axle steering and torque vectoring, the car tells us exactly where it’s going at all times. We also credit the special Goodyear snow tyres fitted specifically for this journey.

Only if you mash the accelerator pedal too suddenly in these snowy conditions does the 479 lb-ft of instant torque from the electric motors spin the tyres dramatically. When that happens, the traction warning light flashes angrily on the dash for longer than we expect. Brake too suddenly, and the car slides. That’s more a testament to the tough conditions, though. It is slippery. It is wet. And it is freezing cold. Any car would have a hard time here.

All electric vehicle batteries experience degradation in these freezing temps, the chemical process is unavoidable. But Porsche says range loss on the Taycan 4S is almost indiscernible. The company fights these tough temps by way of advanced heating measures while on-road and during charging.

This car is flat, composed, and quick, all true to the Porsche performance brand.

Our Taycan 4S tester – a Euro-spec model with 463 kilometres (approximately 287 miles) of range according to the WLTP cycle – leaves the hotel with an 85-percent battery readout on the dash. A Porsche expert suggests our 90-mile or-so journey will drop that figure to 48 percent, but the final readout is actually closer to 42 percent. It’s tough to really gauge range figures in our short time with the car in these conditions, but there is some apparent loss.

But even in these most-extreme conditions, taking things like battery degradation into account, the Porsche Taycan 4S feels like a worthy companion. The car is quiet and comfortable, with seats that conform to your body and materials that feel worthy of the asking price. Like any traditional gas-powered Porsche, the Taycan is easy to drive. The 4S doesn’t have any vagueness in steering or unexpected body movement. This car is flat, composed, and quick, all true to the Porsche performance brand. And that’s even more obvious when we finally do get to the ice driving course.

The Porsche Taycan 4S costs £83,367 to start. But you won't get a well-spec'd model at that price – and definitely not the one driven here. Our tester, without an official price, is safely in the £90,000 to £100,000 range, after options. That sounds pricey, but consider this: the cheapest Turbo model costs £115,858 to start. And the best 4S comes with the same 93.4-kilowatt-hour battery pack and dual motors as the more expensive options. Even though it's more than a hundred horses down comparatively, the 4S is still quick and dynamic.

With that in mind, the Taycan 4S feels like the sweet spot in Porsche's EV lineup. Though the Turbo and Turbo S models offer tons of power and brisker acceleration, the 4S is worthy of its £83,000-plus asking price. It's quick, confidence-inspiring, and, as we learned, as capable in the sunshine of southern California as it is in the frigid temperatures of northern Finland.