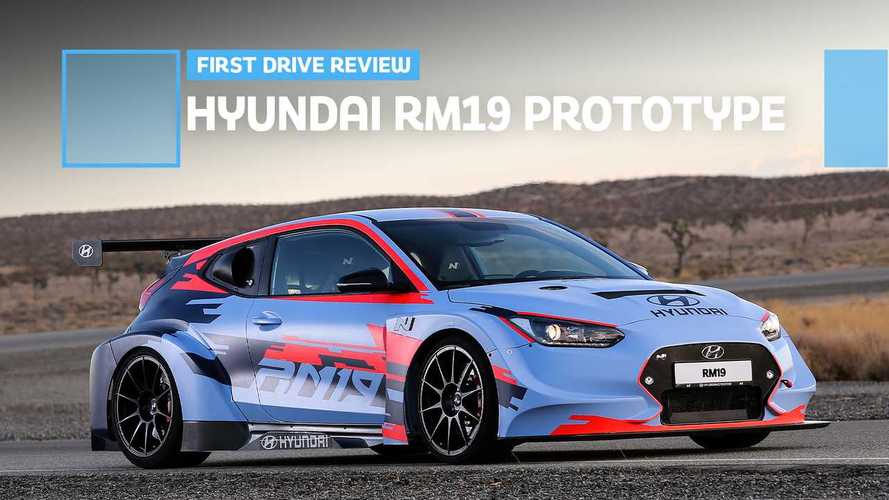 This Hyundai prototype previews what could be.

Question: why don't more hatchbacks have their engines in the middle? The simple answer is that the engineering required to do so is expensive and overly complicated. Not to mention, most companies just don't think consumers want to pay more for what essentially equates to an economy five-door with a frunk. But Hyundai isn't most companies.

For about as long as former BMW M boss Albert Biermann has been the head of Research and Development at Hyundai, the company has striven to perfect its so-called, mid-engined “Racing Midship” concept. Or, RM for short. The first version debuted as a shock in 2012, and it eventually helped spawn the front-engined Veloster N we all know and love.

But seven years of development does a lot of good, and the latest RM19 prototype proves that the possibility of a production, mid-engined hot hatchback from Hyundai is real and upcoming. Though the latest entrant in the RM series is still not yet ready for the road, we love the RM19 prototype for what it is, rough edges and all.

Hyundai says production of the RM19 is still “undecided” at this point (but take that statement with a grain of salt). But our short time with the vehicle tells us there is still work to be done. The reworked Veloster chassis and race-tuned suspension make the RM19 – we would assume – all but useless on public asphalt. The turbocharged 2.0-litre engine now sits behind the driver, meaning there are no back seats. And with just 10 cm of ground clearance (lower than a McLaren 720S), you can't stick your fingers underneath the side sills without getting road rash.

There are some obvious nods to the road-going Veloster; the RM's wedge shape and Hyundai family face are familiar. But the rest of the body comes wrapped in wildly flared arches, Hot Wheels-esque graphics, and a gargantuan rear wing. The only actual production elements that carry over are the headlights and grille – and we're not even sure if the former is functional.

The cabin is barely any road friendlier. The only things familiar about the RM19's insides are the seats and infotainment screen. Hyundai shoehorned in the leather sport buckets and 8.0-inch touchscreen from the Veloster N, but pulled pretty much every other interior component from the Veloster TCR race car: the button-heavy Alcantara steering wheel, the massive carbon fibre paddle shifters, the six-speed sequential racing gearbox, and the six-point harness included. There's no way we'll see any of these elements on a production model, if said production model even happens.

Because the RM19 in its current state is still far from production, Hyundai handed us (and a dozen or so other journalists) the keys to its private California proving grounds. The facility sprawls out over 4,300 acres in the desert near the city of Mojave, California, and features more than 75 miles of drivable test roads. We get just 3.1 of those miles to test the RM19, but it's enough.

Ripped from a Veloster N TCR race car, the gearbox works like a traditional manual in that it takes depressing the clutch to engage first, but requires the use of the paddles to change gears after that without the clutch. Like many of the components on this car, the complicated gearbox won't reach production. But maybe it should. We can't think of a street-legal car that shifts this quickly; even McLaren's lauded seven-speed feels lethargic by comparison.

We can't think of a street-legal car that shifts this quickly.

The mid-mounted, turbocharged 2.0-litre (again, ripped from the TCR race car and now powering the rear wheels) is equally excellent. With 390 bhp and 295 pound-feet of torque moving what equates to a racing shell on a lightweight monocoque frame, the RM19's abilities in a straight line are absurd. Above 4,000 RPM, this red hot hatch shows off supercar-rivalling speed on the track's longer straights and a good amount of punch out of the corners. This thing is so quick (how quick is it?) that Hyundai litters the course with makeshift chicanes in certain spots to keep us from having too much fun (read: crashing).

But even cones can't stop the RM19 from being brutally fun; in just three laps, we manage to fling the car around the track pretty vigorously. The hot hatch's turn-in abilities are, again, unlike anything we've ever experienced. The steering is quick and razor-sharp. The suspension is taut and reactive, which helps keep the car flat even in the most contentious turns. And thanks to the downforce from all that funky aero work, not to mention the super sticky Pirelli P Zero tyres (245/30ZR-20 front and 305/30ZR-20 rear), the RM19 encourages you to keep your foot down. There is just so much grip.

Absurd speed and handling require equal parts braking, though. And the RM19's big six-piston (front) and four-piston (rear) calipers mean we don't need to stand on the brake pedal to stop the momentum of this car down the front straight. The big grabbers do most of the hard work for us. As with the engine and gearbox, the braking components come from the TCR race car, too.

Let's be real: you won't be able to buy one of these as-is (at least, not a street-legal version). Hyundai created the RM19 prototype to both push the limits of what's possible in its lineup, and to use it as a testbed for future products. But the company does promise an RM20 with a different gearbox and a new engine. That one should be more road-friendly and hopefully available to consumers in the near future.

But we love the RM19 as is. Rough edges and all. The gearbox is phenomenal, though wholly designed for racing. The steering and suspension are, too. And even with a scarce cabin clearly not intended to carry any passengers in comfort, you can't help but fall in love with the RM19, even in just a couple minutes behind the wheel. We dare you, Hyundai: build it… or at least some version of it.