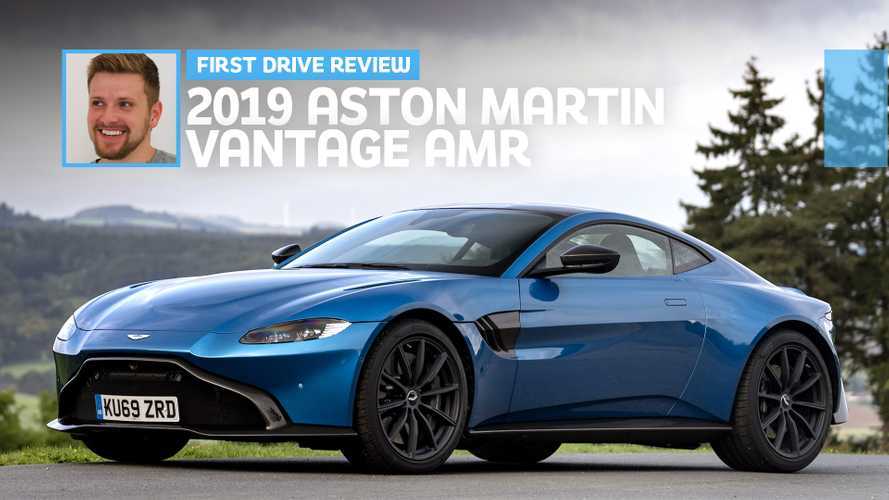 The Vantage AMR revives the lost art of rowing your own gears, at least temporarily.

The manual gearbox is dying. Boomers blame millennials for not wanting to row their own and Luddites blame Silicon Valley startups for shoving autonomy down our throats. But don't blame Aston Martin. The British brand still fully believes in cultivating the do-it-yourself method. And the newest riff on the already supremely good Vantage, the AMR, is proof of that.

In order to fully appreciate the new Aston Martin Vantage AMR, we’re forced to fly more than 4,000 miles to the company’s Nurburgring test facility to drive it. We know, what a burden. Though the track is within eyeshot, Aston limits us to the roads around the ‘Ring. That’s like teasing a dog on a treadmill with a perpetually out of reach slab of bacon. But we can’t complain. The adjacent German backroads are nearly as tight and twisty as the track itself, and the car in question – a V8-powered, rear-wheel-drive Aston with a manual transmission – is obscenely good. As if you expected anything less.

Lift the bonnet and the badge on our tester’s engine reads “Built In Gaydon” (merely for show in the prototype we're driving). In reality, this is a German, AMG-sourced twin-turbo 4.0-litre V8. In fact, it’s the same one in the automatic Vantage. And it’s a ridiculous unit. This engine's 503 bhp are enthusiastic and its 461 lb-ft of torque extremely punchy as we push the car up and down German backroads. Number nerds out there may point out the reduction in twist over the automatic – 502 lb-ft versus 461 – but your butt won't tell the difference as the car blazes to 60 mph in a chest-crushing 3.9 seconds. That's just a touch slower than the 3.5-second AMG GT R that uses the same engine.

But the Vantage AMR has a crucial leg up on its Benz counterparts – pun intended. Enthusiasts rejoice, this Aston uses a seven-speed “dog-leg” manual. That's a stark contrast to the quick-shifting ZF eight-speed available on the standard Vantage. In this case, “dog-leg” means first gear is down and to the left, second is up, and so on. It's counter-intuitive to a traditional manual, designed specifically for straight-line shifts between second and third gear – and as we learn, takes some getting used to.

The back-and-to-the-left movement into first gear is a strange sensation. We double and triple-check the digital instrument cluster display, making sure it doesn't read “reverse." Let off the clutch and the car lurches forward onto the cobblestone driveway of Aston Martin's Nurburgring Performance Centre. What’s obvious is that, not only does the dog-leg seven-speed require acclimation, but the channels that separate the Vantage AMR's seven gears are extremely narrow.

As we hit the road, finding the right gear takes finesse… and patience. Shifting up or down into the wrong cog happens often, and the results are embarrassing. Not even rev-matching can rescue an over-eager, accidental fourth-to-first shift as the tires squeal and the traction control warning lights up the dash. Third to sixth also happens often, especially when quickly attempting to shove the gearbox into fourth.

But for the most part, this is a well-executed transmission: its throws are short, the clutch has a good catch point, and the “AM Shift” rev-match technology is pretty smart. You can even upshift without taking your foot off the accelerator, which is neat. We applaud this seven-speed, not necessarily for being perfect, but in part due to its existence at all. And once acclimated, it's pretty damn fun to use.

Things go far smoother on the Autobahn for us in the Vantage AMR. Its V8 propels us past legal speed limits easily, while still pumping out gobs of torque in both sixth- and seventh-gear. A wide power band delivers peak torque between 2,000 and 5,000 RPM.

Athlete In The Streets

In the move to a manual box, the Vantage AMR sheds some weight – 95 kgs, to be exact. At the same time, it gains standard carbon-ceramic brakes, a 20 percent stiffer rear axle, and new dampers to go along with the active torque-vectoring electronically locking rear differential and near-perfect weight balance, which all carry over from the automatic. Even if the gearbox is occasionally fussy, it doesn’t detract much from the exceptionally sorted chassis.

A slight tug at the steering wheel and the Vantage changes direction instantly, almost telepathically, rotating like a perfectly balanced top. The staggered 255/45-series front and 295/35-series rear Pirelli P-Zero tyres grip like Gorilla Glue for the most part, but let loose just enough for fun, controlled oversteer – especially in the damp. The twin-turbo engine, meanwhile, gives it ample power out of the corners. Aston engineered this car to put Porsche on notice. And while it feels a slight notch below the 911 overall in handling – the Aston isn’t as precise or effortless in the way it moves – the two are close.

Aston engineered this car to put Porsche on notice.

In this car, there is no “comfort” mode. The Vantage AMR only offers Sport, Sport Plus, and Track settings. Track is the most extreme, obviously, and the perfect setting for the smooth, twisty Germans roads where we have our test. Here the suspension and steering tighten up aggressively, and throttle response becomes more immediate. Sport and Sport+ settings are almost too soft along these roads – in the lowliest drive mode, especially, there’s a noticeable (though not totally damning) numb on-centre feel to the steering.

But even at lower speeds, the Vantage AMR feels great. The coupe’s clinical German biases shine through most notably when cruising, as it transitions seamlessly from fire-breathing on twisty mountain roads to quiet and composed around town. The Vantage AMR does meandering well, and even if the seats are overly bolstered and the windscreen is excessively raked, this feels like a very liveable vehicle.

With our hands either on the steering wheel or shifter at all times, we spend little time fiddling with the Mercedes-based infotainment system. It’s merely there. The relatively tiny 8.0-inch screen using Benz’s old COMAND system doesn’t catch the eye, not even with new Aston Martin-specific graphics. The navigation system works fine, the rotary dial does, too, in navigating the settings. Plus, there’s Apple CarPlay compatibility (not Android Auto, though). Yes, this is an outdated system in an otherwise extremely modern car, but that’s beside the point.

The Vantage AMR starts at £149,995. That’s nearly a £29,000 increase over the automatic. This Aston is also limited to just 200 examples worldwide for the 2019 model year, which means you’re unlikely to get your hands on one (don’t worry, a manual is coming full-time for 2020, too). But the premium is a small price to pay given the package.

The fact that the Aston Martin Vantage AMR with a manual gearbox merely exists is a feat. Even if it isn’t shifting nirvana as we might have hoped, the AMG-sourced V8 and Aston’s supremely good vehicle dynamics put the Vantage in close competition with some of the best from Porsche. Assuming you have the opportunity to catch one, please do. With limited manual sports cars remaining in the class, the Vantage AMR is the last of a dying breed.