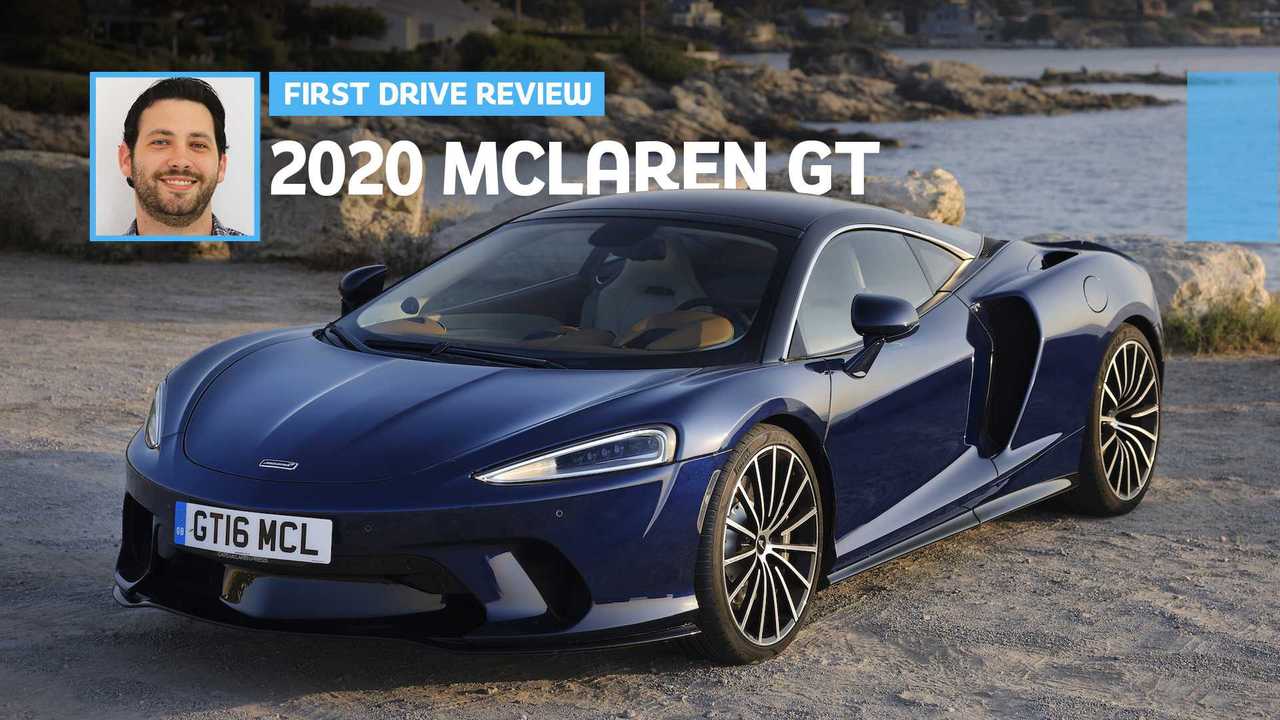 A GT by any other name.

McLaren is not one to follow norms. Whether it's the iconic F1 supercar from the ‘90s with its race-car-like centre-mounted driver's seat, the more recent Senna and its wild lower-door windows, or the new Speedtail's trick embedded rear ailerons, the British carmaker routinely breaks with convention.

The 2020 McLaren GT is no exception. As the brand's self-proclaimed grand tourer, the £163,000 GT challenges the status quo by forgoing traditional characteristics of the class, such as a front-mounted engine and seating for four, for a mid-engine layout and half as many chairs.

The GT uses a modified variant of the carbon fibre passenger cell that's currently in McLaren's Sports Series models (570S, 570GT, 600LT). Christened MonoCell II-T, the new setup adds a carbon-fibre rear-upper structure that allows the GT to incorporate a sizeable load floor underneath its rear hatch. With 419 litres of space, the GT's cargo bay tops the Bentley Continental GT's boot by 62 litres. Factor in the McLaren's 150 litres frunk (i.e. front trunk) and the delta between the two British coupes widens to 212 litres. Don’t judge the GT’s cargo area by its volume, though. Long, shallow, and lumpy, the GT’s cargo hold is less useful than the technically smaller trunks of competing grand tourers. Nevertheless, McLaren claims the GT can fit a set of golf clubs or two pairs of six-foot skis and boots with room to spare for luggage. Squeezing all this in, though, may require some Tetris-like ingenuity.

Hiding below the GT's cargo floor is McLaren's latest twin-turbocharged 4.0-litre V8 (dubbed M840TE). The engine produces 612 bhp and 465 lb-ft of torque, which it sends to the rear wheels by way of a seven-speed dual-clutch transmission. With launch control engaged, McLaren claims the GT will shoot to 60 miles per hour in 3.1 seconds and on to a top speed of 203 mph. Large and rather ungainly intakes aft of the doors channel air into the engine bay to keep things cool.

Thanks to the flow of air brought in by those vents, as well as the heat-absorbing effects of the car's noise, vibration, and harshness materials, McLaren claims the cargo area floor never tops 40 degrees Celsius. Impressive, given the exhaust system gets to nearly 538 degrees Celsius. That said, my backpack felt quite toasty after a few hours in the GT's rear hatch. I'd think twice before putting expensive electronics or things that might melt back there.

While the GT is cosseting by McLaren standards, it's not quite as pampering as more traditional grand tourers such as the Bentley Continental GT or Aston Martin DB11. The McLaren’s footwells are narrow, its 7.0-inch touchscreen infotainment system is finicky and – at times – confusing to operate (it also mostly disappears when viewing it while wearing polarised sunglasses), and there’s not a single advanced safety feature onboard.

That’s right, if you want adaptive cruise control, automatic front braking, lane-departure warning, blind-spot monitoring, and the like, then you’re out of luck. Same goes for ventilated or massaging seats. It’s disappointing McLaren didn't see fit to at least offer any of this kit as an option given the GT’s grand touring intentions.

Fortunately, blind spots are limited thanks to the car's large windows, while the interior includes high-quality metals, sumptuous leather, and switchgear that clicks into place with the weight and precision of an Olivetti typewriter's keys. Spend around £7,500 on the Pioneer or Luxe package and McLaren adds power-operated seats with heaters, a power-adjustable steering column, ambient interior lighting, and package-specific interior colours and brightwork. Both packages also include a cargo area lined in SuperFabric, which features small guard plates woven into the fabric to prevent damage to the trunk floor. Additionally, a £4,500 Premium package nabs a front-end lift for getting over steep driveways or tall obstacles, power-folding side mirrors, a 12-speaker Bowers & Wilkins audio system, power-operated rear hatch, and a luggage area cover.

Still, the GT shows itself a better sports car than grand tourer as I push it about the snaking roads that carve through Castellane, France. The V8 engine that suffers from a dearth of low-end torque and loads of turbo lag around town comes alive once its flat-plane crank crosses the 3,000 rpm mark (where 95 percent of its torque comes online) and eagerly zings toward and past its 7,500 rpm power peak. The dual-clutch gearbox, which – in automatic mode – slips and stumbles through gear changes like a pig in mud, transforms completely in manual mode, and each push or pull of the thick, steering-wheel-mounted paddle emits a satisfying and audible click that precedes a quick, and near-immediate, cog swap.

Meanwhile, the adjustable dampers, adeptly control the car's body motions without punishing its occupants in Comfort mode (don't worry, there are Sport and Track modes for the more masochistic).

Factor in the race car-like brake pedal action and the hydraulically assisted power steering that feels directly connected to the staggered, model-specific Pirelli P-Zero tyres (20 inches up front and 21 inches at the rear), and the GT engages its driver in a way that no traditional grand touring car sold today does.

Each push or pull of the thick, steering-wheel-mounted paddle emits a satisfying and audible click.

Alas, no matter the occasion, the V8 and its associated exhaust are just a bit too muted for my taste. Even with a standard active exhaust that uncorks the pipes with heavy accelerator inputs in Comfort mode (it stays open in Sport and Track mode), the GT’s exhaust note is rather tame – even among grand touring cars. It's worse from within the cabin, where the whirl of the engine’s turbochargers drowns out the exhaust system’s song. A sport exhaust is available for around £3,000 and it might fix this quibble.

The 2020 McLaren GT continues the British automaker’s crusade against the status quo. Whereas other grand touring cars coddle the driver, the GT offers an immersive driving experience. Arguably, it’s a little too immersive for this segment. Regardless, no one will accuse McLaren of following the norm.