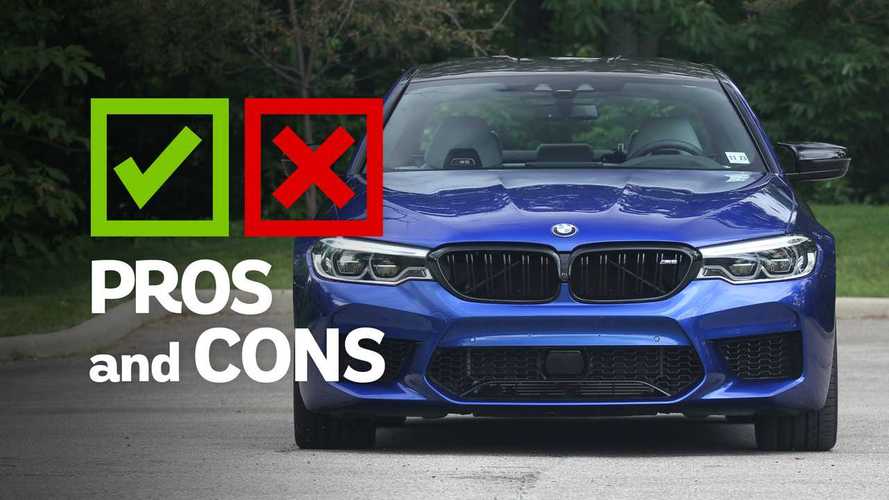 If there’s something this car can’t do, we couldn’t find it.

The word "crossover" usually describes a vehicle that looks like an SUV and rides like a car. I think it should be expanded, though, to describe the 2019 BMW M5 Competition, which looks like a sedan and drives like a supercar.

It’s a perfect blend between the two, combining a 617 bhp engine and a trick drivetrain that can switch between rear- and all-wheel drive with the body of a luxury sedan that coddles its occupants like newborns who haven’t left the crib.

See BMW M5 Competition lap the Nurburgring in a remarkable 7:35
⠀

It’s the M5 Competiton’s supercar side that’s most interesting, though. Despite its generous dimensions and profuse weight, this car can seemingly defy the laws of physics and keep up with, if not embarrass, actual supercars.

As a great man once said, if you have the means, I highly recommend picking one up.

It’s not an overstatement to say the BMW M5 Competition is a four-door supercar. Its twin-turbocharged 4.4-litre V8 produces 617 bhp (17 more than the standard M5) and 553 pound-feet of torque. With an unflappable ZF 8-speed automatic transmission and a driveline that can switch between rear- and all-wheel drive, the M5 is every bit an exotic as, say, a Lamborghini or McLaren – it just has room for four and a boot larger than a Camry’s.

If you’re into numbers, here they are. The M5 Competition reaches 60 miles per hour in 3.1 seconds, according to BMW. Its top speed is electronically limited to 156 mph, but it can reach 190 mph if its digital shackles are removed. The accelerator pedal is a brutal hammer to wield when the M5 Competition’s adjustable settings are maxed out, and the car’s handling is incredibly quick, sharp, and communicative considering its size and weight.

There’s a fully loaded BMW 5 Series luxury saloon under the M5 Competition’s bravado, which means you’ve got a car that can be daily driven, even as a family vehicle, when you don’t have occasion to be flogging it on a back road.

The front seats are incredibly comfortable and feature 20 way of adjustability. Even the side bolsters can be brought in to squeeze your sides or let out like a waist belt after a big meal. Rear seating is also plenty large enough to fit two adults, and the aforementioned boot is tall and deep.

As we mentioned in our review of the standard M5, we particularly like BMW’s accent lighting system, which offers both a large selection of colours to choose from as well as the ability to mix colours with a two-tone setting.

That’s the sound of the M5 Competition's exhaust when the car’s performance settings are turned up to 11. If you lift off the accelerator, the car coughs and belches like a vintage race car. This is a small thing to put in the pro column, but I was so charmed with the M5 Competition’s character in supercar mode that I found myself driving along through suburbia and lifting off the accelerator pedal just to hear the BWAP, BWAP, BWAP bounce off the trees and houses. People doing work in their front yards looked up from their mulch and scanned the street for an obnoxious muscle car, and they looked right past the M5 as I cruised by.

For anyone who has purchased a BMW before, you know the brand has a penchant for milking customers with expensive options that should probably be standard. The M5 Competition is no exception.

Despite a starting price of £95,000, the M5 Competition I drove was loaded with another £16,000 worth of options. The most expensive was carbon ceramic brakes, which commanded the princely sum of £7,495. Next up was the Executive package that included many features a wealthy buyer might expect to be included – things such as sun shades, wireless charging, a surround-view monitor, and, no joke, heated seats. Lastly, BMW charged another £1,470 for its Driving Assistance Plus package, which includes Active Driving Assistant Plus. This is BMW’s most advanced semi-autonomous drive system, though it’s a few steps behind Tesla’s and Cadillac’s in regards to how well it works and in what conditions. At least it’s priced to reflect that.

The only negative about the M5 Competition’s performance capabilities is that they can’t be turned down as far as on the regular M5. The Competition-spec model gets stiffer engine mounts, a lower ride height, stiffer springs, and a stronger anti-roll bar. That means when the car’s adjustable demeanour is dialled back to its most comfortable settings, the ride is still a bit stiff. If you want your super saloon's Jekyll and Hyde sides to be more even, go for the regular M5.

The M5 Competition is a large car that weighs a lot, and computers and engineering can only do so much to mask this reality. Personally, the fastest I’m willing to go in a car is limited by how comfortable I am driving it fast, and with something this large, with these sightlines, and this much weight, that threshold of comfortability comes sooner than in other purpose-built performance machines.