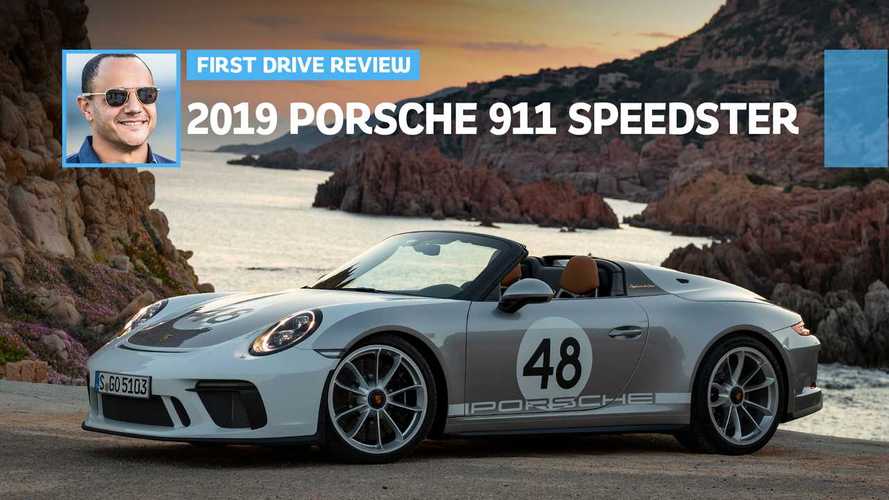 An open-roof swan song based on the best Porsche 991.

Despite a provocative naming strategy, the Porsche 911 Speedster’s first four generations looked quite a bit faster than they actually were. Sleek and stripped down, the limited-edition roadsters flirted with incremental weight savings and minor gains in power, but never tapped into the hardcore performance potential of Porsche’s GT cars.

Enter 2019, and things are suddenly different: the new Porsche 911 Speedster disrupts the paradigm by packing genuine GT hardware beneath its low-slung bodywork, making a track-capable Speedster that finally goes as fast as it looks. Strip away the exterior – the chopped windscreen, sloping carbon fibre bootlid (which is the largest structure of its kind Porsche has ever produced), and various other lightweight panels – and the mechanicals echo what you’ll find in the GT3 Touring.

Of course, the naturally aspirated 4.0-litre flat-six figures prominently into the storyline. Producing 502 bhp and 346 lb-ft of torque, the engine is a hugely symbolic totem for Porsche that keeps a foot in the past by not succumbing to forced induction, and inheriting a complex individual throttle body setup from the GT3R race car.

Continuing the theme, all 1,948 Speedsters Porsche is planning to build will feature a row-it-yourself six-speed manual gearbox. Unlike earlier 911s, where rev-matched downshifts required a switch to Sport mode, this one comes with an 'Auto Blip' button on the centre console.

GT3 suspension hardware, meanwhile, has been slightly tweaked for a less intense ride. The springs remain untouched, but the ride height increases 5 mm and the dampers are tuned for greater compliance.

The cabin offers a few mostly symbolic gestures toward lightweighting and minimalism, from fixed, carbon bucket seats and nylon-strap door pulls to a button-free steering wheel. Buyers can delete air conditioning, but US market cars are stuck with a multimedia screen due to backup camera requirements.

But the Speedster’s more crucial personality traits come from driving with the top down at speed. It takes a few more steps to deploy the Speedster’s thinner fabric roof than a conventional, power-actuated cabriolet top. You’ll need to pull over, press a button to release the clasp, step outside, pull the tonneau cover back, and perform a folding technique that involves walking to either side of the car and tucking and snapping the side fins into place before clicking the tonneau shut. Top-down, the Roadster looks smooth and smart from most angles, though some rear views can make the tonneau seem unusually long.

First interactions with the Speedster are crisp: there’s the immensely satisfying bolt-action movement of the shortened shift lever, the natural clutch progression, and a remarkably intuitive throttle response as you climb through the 9,000 – yes, 9,000 – rpm rev range. With peak torque arriving at 6,250 rpm, it’s easy to shift and leave all that remaining grunt on the table (horsepower doesn't top out ‘til 8,400 rpm).

But stay the course, and the flat-six produces a thrilling tidal wave of power all the way up to redline. There’s less sound than you might expect to go with the fury of acceleration (0 to 60 mph arrives in 3.8 seconds), and you can blame regulations for that; Euro versions use a petrol particulate filter in the exhaust system for emissions compliance (just like the new Euro-market 911), and US models get an element replacing the filter in order to maintain proper back pressure.

Surprisingly, it turns out the engine isn’t quite the Speedster’s scene-stealing attraction. Despite the powerplant’s tremendous thrust and rev happy responsiveness, the Speedster’s chassis and suspension reveal a remarkable balance between on-road compliance and cornering sharpness. Although the 20-inch centrelock wheels with a foot-wide rear section width look like they’d transmit a whole bunch of shock to the cabin (as they tend to in the GT3 Touring), the Speedster manages irregularities with considerably greater grace and composure. Tackle a corner, and the turn-in feels direct and clear, offering enough front-end bite to encourage high corner-entry speeds. There’s plenty of mechanical grip throughout, so much so that it takes a long sequence of bends to realise you can get away with ludicrously high velocities before tyre-scrub takes place.

With the reins loose enough in ESC OFF, we’re happy to leave the traction control alone.

Press the 'ESC OFF' button, and the Speedster gets noticeably livelier when pushed hard, enabling slides that reveal the engine’s considerable power reserves. We didn’t have the nerve to switch all systems off (after all, the cliffs in Sardinia, where we were testing the Speedster, are very steep), but then again, we never felt the need. With the reins loose enough in ESC OFF, we’re happy to leave the traction control alone.

As with the less edgy suspension, Porsche made the carbon ceramic brakes a tad more user friendly via a slightly softer pad compound. The resulting change doesn't draw much attention to itself, but that’s exactly the point; the Speedster feels like a more approachable, more usable version of the GT3 Touring.

It trades some of the manic, high-strung suspension action for a more docile ride. The result is greater comfort, yes, but also more confidence when negotiating corners. After all, nothing feels quite as reassuring as good steering feedback coupled with a suspension’s ability to feel connected to the road below. Added bonus: the airflow through the cabin, a bit stronger and more turbulent due to the abbreviated windscreen, brings an element of drama to the proceedings.

To call the new 911 Speedster a GT3 Touring with added vitamin D would be missing the point. Sure, it shares the vast majority of the coupe’s underpinnings and wraps it in al fresco packaging, but the chassis and suspension tuning bring an entirely different character to the roadster, lending it a surprising amount of usability. Is it a little weird that we’re talking about ease and approachability in a limited production, £211,599 Porsche? Maybe. If you’re really into the idea of tempestuous, challenging high-dollar sports cars, the Speedster might not tickle your fancy. But if your vision of a limited-production ragtop includes driving it fervently every day, the Speedster manages to deliver shockingly pricey but impressively effective high-speed bliss.