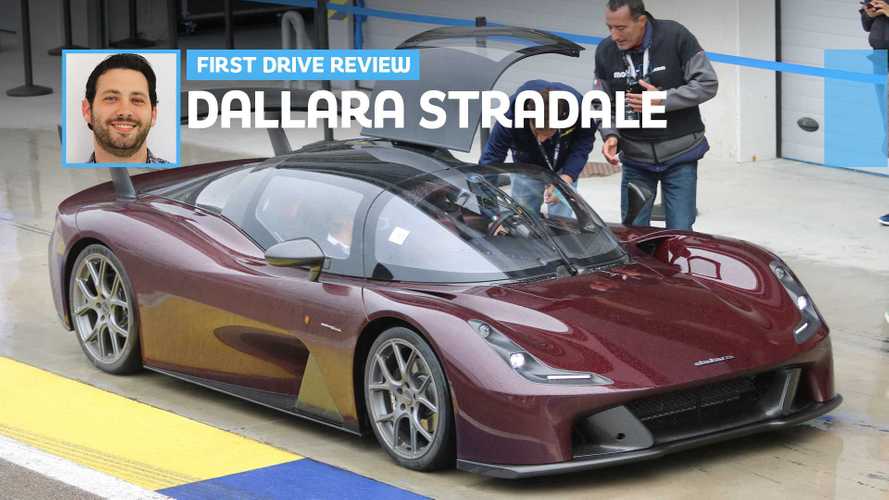 An expensive and engaging track toy.

It happens just as the Dallara Stradale enters Autodromo di Modena’s rain-soaked turn seven. Right foot on the brake, left on the clutch, I slide the gear lever into second, release the clutch, and, wham, the rear-end steps out. A swift tap of the accelerator brings the tail back in and I’m able to make my way along the wet tarmac with nothing but my white knuckles to show for my misstep.

Although the Stradale’s Pirelli P Zero Trofeo R tyres are no fans of the rain, the Italian sports car’s responsive chassis and razor-sharp reflexes make for a confidence-inspiring combination that allows an amateur driver like myself to feel like Senna at the 1993 European Grand Prix.

Despite its lack of name brand recognition, Dallara’s roots trace back nearly 50 years. Founded in 1972, the company quickly established itself in the racing world. Today it constructs chassis for the likes of Formula 3, Formula E, Indy Car, and IMSA. The Stradale, though, is the first road-going vehicle to wear the Dallara badge. You can read our first drive of the Stradale on the road. In the United States, the Dallara is a track-only toy, as the sports car fails to meet the regulatory standards to putter about on their roads – and that's where this test comes in.

It’s an expensive track toy, too, thanks to a base price of approximately £165,500. And that’s before adding any options.

In its purest form, the Stradale is windscreen-less barchetta. However, an available front windscreen turns the Dallara into a roadster, while a bar that spans the length of the cabin makes it a targa. Additionally, a pair of hinged side windows enclose the Stradale’s cabin and morph the sports car into a coupe. Dallara also offers an optional rear wing for extra downforce. While the company didn’t share the cost of the Stradale’s optional equipment, I wager the big-winged coupe I pilot wears a sticker price that’s close to – if not more than – £200,000.

With no formal doors (save for the coupe’s side glass, which open in a gullwing fashion), entering the Stradale is a balancing act that requires straddling the tall and wide side sill by first placing my right foot on a specially designated section of the interior floorboard, then dragging my left foot into the cabin, and finally dropping my body into the heavily bolstered, fixed seat. A manually adjustable pedal box and telescoping steering column afford a satisfactory driving position.

The four-cylinder engine’s crescendo is rather agricultural, but its punch is plentiful and predictable.

Save for a handful of console-mounted controls for the likes of the HVAC system, the Stradale’s interior is generally free of unnecessary frills. Switches for things such as the turn signals and exterior lights take up space on the steering wheel, while a digital gauge cluster keeps all relevant information in the driver’s line of sight. The display’s small font, though, makes it difficult to see at speed. Fortunately, bright shift lights inform me each and every time the Stradale’s turbocharged 2.3-litre inline-four approaches redline.

Plucked from Ford, and found in vehicles such as the 350-horsepower Focus RS and the 330 bhp Mustang with the new High Performance package, the turbocharged 2.3-litre four-cylinder makes 400 horses in the Stradale thanks to revised internals and an electronics system developed with Bosch. Still, the Dallara’s output seems comparatively small considering the least powerful McLaren, the 540C, makes a heady 533-bhp.

Yet, much like Lotus, Dallara prioritises minimal mass over outright power, and the 1,885-pound Stradale is a substantial 1,085 pounds lighter than the entry-level McLaren. The Italian company claims the sub-ton sports car scoots to 62 mph in 3.3 seconds and tops out at 174 mph (the latter of which is surely achieved without the available rear wing in place), besting the McLaren’s 3.5-second trot to 62 mph but falling short of its 199 mph top speed.

Needless to say, the Stradale is quick, and it swiftly gathers speed as I pin the accelerator pedal to the floorboard and enter the track’s long front straightaway. The four-cylinder engine’s crescendo is more agricultural than the V8s of McLaren, Ferrari, or Lamborghini, but its punch is plentiful and predictable. Although the Stradale is available with an automated manual transmission with paddle shifters, the car on-hand sports the standard six-speed manual gearbox that features short but somewhat notchy throws.

Yet, the weakest link in the Stradale’s mechanical chain is its brakes, which are over-assisted, touchy, and short on pedal feel. In contrast, the steering is full of feedback and offers race-car-like granularity that keeps me informed of the smallest changes in contact between the front tyres and the damp pavement.

Given its track-only status in the US, the Dallara Stradale is a car with limited appeal. Still, those with the means to purchase one of the 600 Stradales that Dallara plans to produce over the lifecycle of the model will find a vehicle that’s forgiving enough to make an amateur driver feel like a pro racer and involving enough for drivers of all skill sets to truly enjoy.