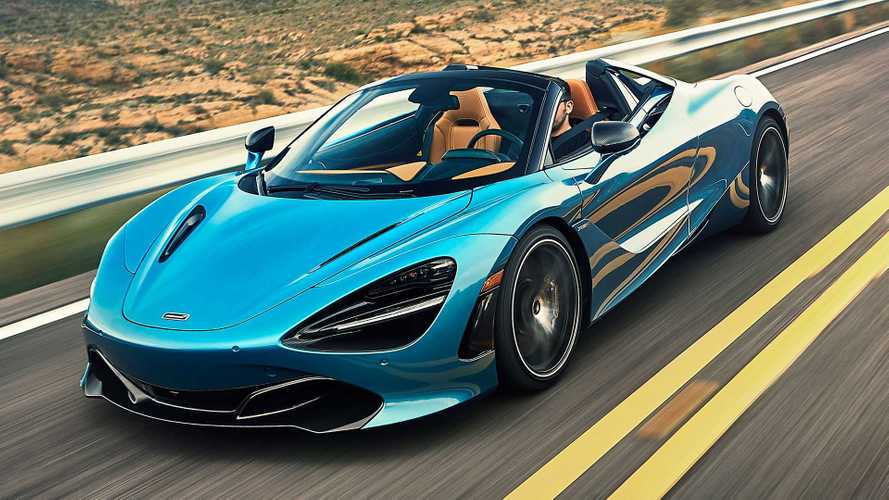 This is the best argument against the 720S Coupe.

Driving rain pelts the aggressively raked windscreen of the 2020 McLaren 720S Spider, while motorway speed forces the precipitation around the front glass and then up and over the side windows.

Once in the cabin, it trickles down, down, down into the doors, where no doubt the water will make fast friends with fickle British electricals. I desperately try to wipe the moisture away, dampening the sleeve of my North Face jacket. The black fleece-lined zip-up serves as my only protection from the unexpectedly chilly Arizonan air. This is not ideal weather for testing a convertible supercar. It’s grey. It’s gross. And as I finally burst out from beneath the squall into blazing, brief sunshine, it all feels remarkably British.

My Belize Blue 720S Spider isn’t as perturbed by the rain, wind, and sub-50-degree weather as I am. Its heater is strong and its heated seats stronger. Plus, there’s a folding hardtop roof for when the foul weather finally becomes too much. As I surge through the ever-changing conditions in the mountains north east of Phoenix, Arizona, I start to wonder if much could bother the 720S Spider and a sufficiently determined driver.

This is, of course, by design. During our morning briefing, McLaren’s global head of communications and public relations, Wayne Bruce (affectionately referred to as Man-Bat, for obvious reasons), told about 20 other journalists and me that the carmaker’s goal was to build “the most complete convertible supercar.” Before turning a wheel, this sounds like marketing poppycock, to use Bruce’s English English.

But from behind the wheel, it isn’t.

Taking any car, from a four-cylinder Ford Mustang to a two-door luxo barge to a hilariously expensive supercar and lopping the roof off is going to introduce compromises. And like chinks in a suit of armour, these weaknesses can be a car’s downfall. But the 720S Spider has no discernible flaws. There are no compromises or faults. It takes everything that’s good about the 720S and adds to the already lengthy list of positives. Mission accomplished, Man-Bat.

What does it really make:

Much of this goodness is because McLaren obeyed Brandon’s First Rule of Convertible Design: Thou shalt plan a convertible from day one. Rather than suddenly deciding that it’d offer an open-roof version of its new supercar after introducing the Coupe, McLaren envisioned and designed the 720S to accommodate a folding hardtop from the start.

McLaren envisioned and designed the 720S to accommodate a folding hardtop from the start.

The Coupe’s Monocage II carbon fibre monocoque sprouts fixed rollover supports and a new upper structure to accommodate the single-piece roof and its tonneau cover. Engineers also redesigned the top roof rail to accommodate the single automatic latch and then moved the rail forward 3.1 inches to let a little more sky in when the roof was down. This repositioning, along with a new dihedral door design that’s narrower and opens further, makes getting in and out of the 720S Spider easier than its predecessor, the 650S Spider.

On the flip side, the convertible design required the engineers to hack out the central “spine” that runs down the middle of the Coupe’s roof. But despite this, the Spider has no additional structural enhancements. None. Nada. I'll repeat that: The new monocoque is so strong and so stiff that losing the roof didn’t force McLaren to add heavy structural reinforcements. That’s a huge accomplishment. And it pays dividends on both the stat sheet and from behind the wheel.

At 2,937 pounds dry, the 720S Spider is 83 pounds lighter than the 650S Spider. It’s just 109 pounds heavier than 720S Coupe. And because McLaren’s new convertible gains so little weight over its hardtop sibling, it’s even lighter than the hardcore versions of its primary competitors. The Ferrari 488 Pista Spider (3,042 pounds), Lamborghini Huracán Performante Spyder (3,322 pounds), and Lamborghini Aventador S Roadster (3,583 pounds) should probably lay off the spaghetti bolognese.

Considering its featherweight nature, it’s no surprise the 720S Spider is just as quick to 62 miles per hour as the Coupe, doing the deed in 2.9 seconds. Keep going, and 124 mph arrives 7.9 seconds after setting off. That’s just a tenth of a second slower than the Coupe. And regardless of body style, the top speed is 212 mph. The Spider’s top speed is only lower than the Coupe’s if you put the roof down – then it’ll do just 202 mph.

That impressive performance is down not just to an obsession over weight that’d make a Hollywood casting director say, “That’s a bit excessive,” but to the unchanged M840T engine and seven-speed dual-clutch transmission.

Like the 720S Coupe, the twin-turbocharged 4.0-litre V8 belts out 710 bhp and 568 pound-feet of torque. Under wide-open throttle, constant power and torque mingle with rapid gear changes for unbridled speed. Until you’ve adjusted, there’s no real way to prepare for the 720S’s straight-line performance – it takes your breath away when it happens and then leaves your face tingling once you lift off the throttle. I was grateful my co-pilot took the first leg of the rainy journey so that I could acclimate to the brutal speed. At the same time, the wet weather kept me from sampling the 720S Spider’s full performance. Even in the above video, a torrential downpour followed those few minutes of sunshine.

Eventually, the conditions grew so unpleasant that my co-driver and I slowed to 31 mph and raised the folding hardtop. It takes just 11 seconds for the single-piece carbon fibre assembly to go up (or stow away for that matter), and once in place, the Spider does an excellent impression of the fixed-roof model, both in how it drives and how it looks.

With the roof up, the 720S Spider feels just as roomy as the Coupe. Headroom is ample, even for taller drivers, while the overall driving experience is free of cowl shake or other bad manners. This comfort is partially due to the excellent hydraulic suspension and partly thanks to the ultra-stiff carbon fibre monocoque underpinnings. In fact, with the roof up, the 720S Spider is so civilised it’s easy to forget it’s a convertible.

The Spider does an excellent impression of the fixed-roof model, both in how it drives and how it looks.

Even though I could raise and lower the roof at speed, it wasn’t feasible to slow to 31 mph so I could drop the top every time the sun deigned to reappear. That’s where the 720S Spider’s new electrochromic roof came into play. Like Mercedes-Benz’s Magic Sky Control (but without the dopey name), the glass panel adjusts its tint level between two settings at the press of a button, allowing drivers to vary the amount of light that enters the cabin easily.

While the electrochromic roof provides excellent skyward visibility, McLaren also improved the sight lines in its new Spider. The tail is an inch lower, which, along with semi-transparent flying buttresses and a wide wind guard that doubles as a rear window, improves rear visibility. Lateral visibility suffers some with the top up, especially over the driver’s right shoulder, but I found it easy enough to manage in the traffic outside of Scottsdale – the sizeable rear view mirrors are a big help.

Speaking of those flying buttresses, they’re the key to hiding the Spider’s folding hardtop. The silhouette between the two cars is virtually identical thanks to the 720S Spider’s new aerodynamic flying buttresses. The semi-transparent elements sit atop the roll hoops and bleed into the rear quarter panels, just aft of the intakes for the mid-mounted V8. This is a vast aesthetic improvement over the 650S, and not just because flying buttresses are the definition of awesome. The old Spider’s convertible roof had a tacked-on look compared to the new model.

The flying buttresses are unquestionably pleasant to look at, but they’re also functional, generating downforce with nearly no drag, improving rear visibility thanks to their semi-transparent glazed finish, and channelling air away from the sides of the car and toward the engine cover, the aero bridge, and that big rear wing.

With a smidge of clear weather, I drop the roof again to bask in the cabin’s relative civility. The 720S’s buttresses sit an inch lower than the units on the 650S in a bid to reduce wind noise in the cabin. Along with a transparent, power-operated wind guard that assumes the best position to reduce wind noise based on the vehicle’s speed, I could carry on a conversation at freeway speeds without shouting. In fact, with the windows up, the cabin experience is impressively civilised for a convertible supercar.

£237,000 is not an unreasonable sum for the best convertible supercar I've ever driven.

It’s also impressively expensive. Prices for the 720S Spider start at £237,000. That’s not an unreasonable sum for the best convertible supercar I’ve ever driven.

That high praise isn’t because the McLaren 720S Spider is so fast, or so agile, or because it looks so good. Those are all pluses, sure. But it’s the only convertible I’ve ever experienced that has virtually no drawbacks compared to its hardtop counterpart.

Not even the price is prohibitive – if you can afford a 720S Coupe, you can afford the Spider’s £237,000 starting price. The biggest problem with this car (and it’s one for McLaren, rather than you, dear supercar shopper) is that it makes the Coupe superfluous. The 720S Spider is that uncompromising. I genuinely feel bad for anyone that’s bought the Coupe. But hey, at least they’ll have a fixed roof to hide their shame.