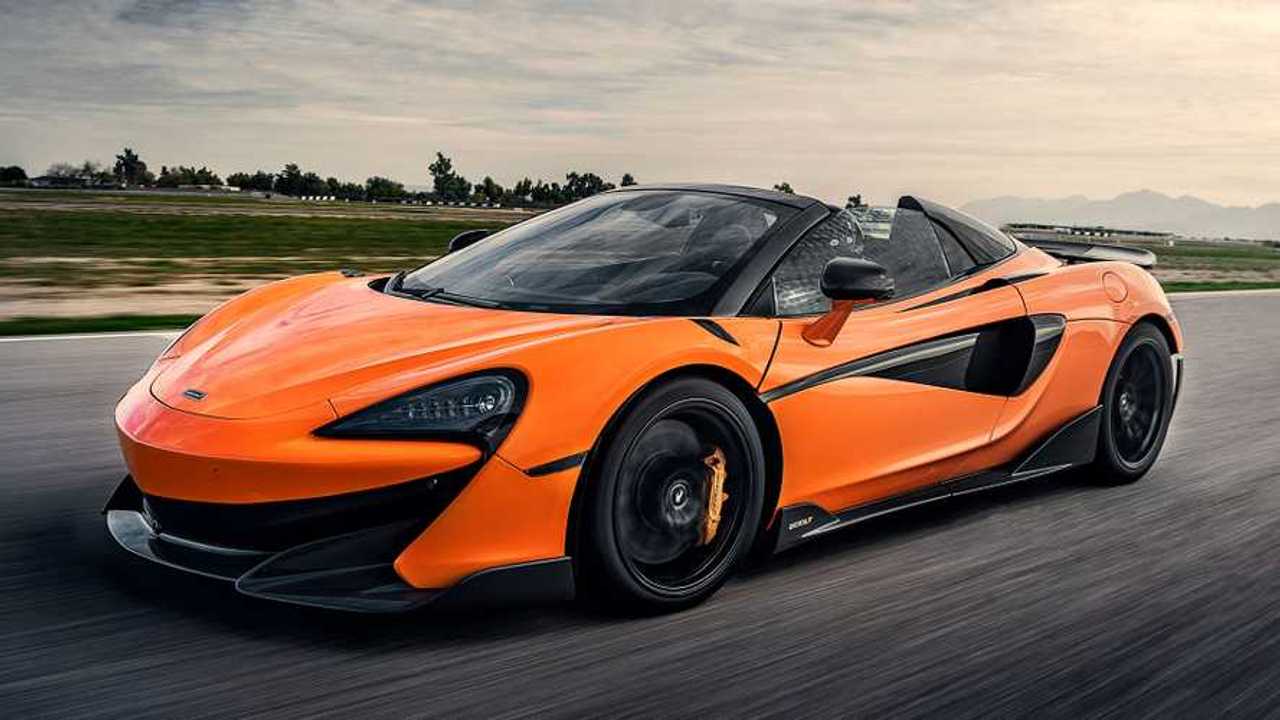 The McLaren 600LT Spider is fast. I'm flying down the back straight at Arizona Motorsports Park, well past 100 miles per hour, preparing to brake for a tricky double-apex right-hand turn, when I'm passed. Not by a car, mind you, but by a Lockheed Martin F-35 Lightning II fighter jet from the adjacent Luke Air Force Base.

That $90-million fighter humbles McLaren's latest long-tail convertible. Among vehicles that can't do Mach 1.6 or carry laser-guided bombs, though, there isn't a lot that can outdo the 600LT, and fewer still that can do it without a roof.

Like the 600LT Coupe, a twin-turbocharged 3.8-litre V8 with 592 bhp and 457 pound-feet of torque scoots the LT Spider to 60 mph in 2.8 seconds. Getting to 124 mph takes just an extra two-tenths of a second compared to the hardtop, and I promise, you won't notice the difference.

The 2.3-mile AMP circuit has four satisfying straights that are perfect for a V8 that's this happy at high engine speeds. The 600LT's twin-turbo 3.8-litre engine makes peak torque from 5,500 to 6,500 rpm and peak horsepower at 7,500 rpm. And since it's a McLaren, those numbers arrive quickly and are easy to maintain over the course of a lap. This engine makes its money north of 5,000 rpm, where it's a constant, inexhaustible source of speed. There are no histrionics or drops in power, just blunt performance.

But even in a slower corner or on the public roads around the track, the 600LT is quick to build a head of steam. Over the course of the drive from our resort in Scottsdale through the desert north of Phoenix and toward AMP, the 600LT's point-and-shoot ability is addicting. You dig into the throttle, and after a bout of turbo lag, there's ferocious revving and blistering straight-line speed.

This is down to the engine, obviously, but also to the fantastic transmission and the tenacious tyres. The gearbox is a seven-speed dual-clutch unit, and it's at its best in two specific settings. The first is, obviously, manual mode. A delicious click accompanies each pull of the rocker-style paddle shifters (pulling one effectively pushes the other; you can't pull both), while the bolt-action feel and the immediate gear change is remarkably addicting.

The other setting is Sport mode. Counterintuitively, it's better than Track mode, but only because Track's upshifts and downshifts are too fast, too seamless, and too lacking in drama. After trying both, my co-driver and I unanimously opted for the middle setting. In Sport, upshifts under hard throttle produce a pleasant amount of shift shock (that delightful kick in the small of the back that engineers are constantly trying to dial out of high-performance vehicle transmissions). Now, I know, this is one of those things that's not “good,” but it's so, so enjoyable – like the automotive equivalent of smoking. Sport also produces an ear-pleasing bark from the top-mounted exhausts that's absent in Track.

You dig into the throttle, and after the smallest bout of turbo lag, there's ferocious revving and blistering straight-line speed.

But while the transmission is a joy to work, the tyres provide the sort of grip that makes deploying the engine's power out of a turn less a question of bravery and more one of patience. The 285/35/20 rear tyres are Pirelli PZero Trofeo Rs and they feature a compound unique to the 600LT. The grip levels border on glue-like.

I tried – really tried – to get the tyres to let loose. Launch control doesn’t cause a loss of composure (in fact, it may have enhanced it), and even switching off the stability control and mashing the throttle can’t defeat the tyres in such a way that the McLaren is hard to control. There's just constant, unshakeable confidence.

And of course, organ-rearranging acceleration. But even as the G-forces crush me into the driver's seat and force my kidneys and lungs to swap locations, my ears are happy. And if I'd been driving at night instead of on a bright, cloudless day, my eyes would have been thrilled, too, thanks to the 600LT's top-mounted exhaust. Every car should have top-mounted exhausts.

In the 600LT, the twin pipes jut out from the top of the engine cover, like some tribute act to yesteryear's velocity stacks. Yes, with the top down, the LT Spider is even louder than the Coupe or the 570S Spider. And even though the 600LT's 3.8-litre V8 doesn't sound as evocative or exciting as the engine in a Ferrari 488 or as immediately identifiable as the Lamborghini Huracan's V10, it sounds invigorating and eager. But while the soundtrack from Ferrari or Lamborghini might be better, neither of those cars spit fire – the 600LT does. And it happens so frequently and in such volume that McLaren had to replace the centre third of the fixed rear wing with the same heat-proof material that surrounds the exhausts themselves.

The soundtrack from Ferrari or Lamborghini might be better, but neither of those cars spit fire – the 600LT does.

That fixed wing is the crown jewel of the 600LT's aerodynamic package. McLaren claims the combo of the spoiler, diffuser, side sills, front splitter, and other elements generate 100 kilograms of downforce – 60 kg in the back and 40 kg in front – at 155 miles per hour. These carbon-fibre elements are just as effective on the Spider as they are on the Coupe, despite the former's three-piece retractable roof.

That hardtop adds just 48 kg of weight to the standard 600LT package thanks to its composite construction. Drivers can raise and lower the roof in just 15 seconds and while driving under 25 mph. Smart convertible touches, meanwhile, start and end with the power-operated rear window. Put the roof down, and the window serves as a wind blocker. With the roof up, the driver can still lower the rear glass for a dose of extra air and a little more exhaust noise.

But despite the addition of a folding roof (or the subtraction of the fixed roof, depending on your interpretation), the Spider is only a little heavier than its Coupe counterpart – just 50 kg separate the two. And the 600LT Spider is much lighter than the car that underpins it: the 570S Spider.

McLaren cleaved 99 kg from the 570S Spider to create the 600LT Spider, with the usual suspects at work. The new Pirelli tyres partner with ultra-lightweight 10-spoke wheels to reduce unsprung weight by 4.2 kg at each corner. The 600LT also ditches its air-conditioning system, navigation, and audio systems to save another 16 kg, although McLaren will add all of those items back free of charge if you're looking for a less Spartan experience (my Myan Orange tester carried them). And in the frunk, McLaren added lightweight carpets, while Alcantara suede takes the place of leather elements in the cabin to save 4 kg.

McLaren cleaved 99 kg from the 570S Spider to create the 600LT Spider.

The result of this diet, along with the new suspension's stiffer sway bars, updated adaptive dampers, and revised engine mounts, is an impressively tight, agile, and communicative roadster. There's very little body roll, and what's there serves exclusively to inform the driver. The 600LT Spider is remarkably talkative, constantly keeping its driver apprised of grip levels from the fat Pirelli tyres. While the P Zero Trofeo Rs feel inexhaustible, our pro driver proved they had a limit. But thanks to the chatty suspension, I could feel exactly where the limit was and how gradually it arrived – even from the passenger’s seat.

The impressive feedback is also down to the 600LT's seats, which are the best, worst chairs I've ever experienced. The single-piece, carbon-fibre-backed buckets wear attractive Alcantara suede, only offer fore-aft adjustability, and would look at home in a race car. But they’re only comfortable if you're as fit as a racer. Otherwise, these chairs are simply painful. I'm not a small man, but even at my fittest, I doubt I could comfortably fit in these seats. Instead, I sit on top of the hard, unforgiving bottom bolsters and almost bolt-upright, thanks to the fixed backrest. Thankfully, McLaren Special Operations offers the heated, power-adjusted seats from the 720S as a $3,400 option. Unless you have a 30-inch waist, consider that money well spent.

And to be entirely frank, what's £2,800 on a car that starts at £201,500? Yes, the 600LT is expensive. And like the rest of McLaren's long-tail models, it will be rare. The British brand will only build the open-top LT for one model year, and even then, it's a limited-edition vehicle. But unlike the boondoggle that is the F-35, the McLaren feels like money well spent.

Philosophically, the 600LT Spider shouldn’t work – the mission of a track car and a mid-engine convertible are just too different. But like the fighter jets that screech overhead during our session at AMP, McLaren takes these differing philosophies and somehow marries them into a package that excels in both disciplines. So while a 600LT Coupe will be more dynamic and a 570S Spider will be more comfortable, the 600LT Spider is such a complete and likeable offering that I’m happy to ignore the radically different traits. So put the top down and hit your local circuit. Just watch out for low-flying fighter jets.