The instrument cluster is afire with warning messages. There’s no traction control, no stability control, and the ABS light is flashing because there is no ABS. That’s deliberate, rather than a catastrophic failure of the electronics in this hastily prepared Jaguar F-Type rally car. 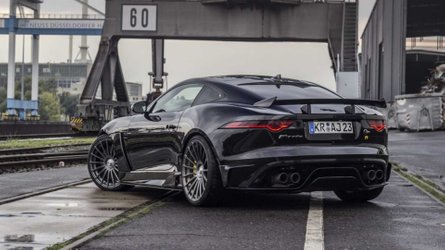 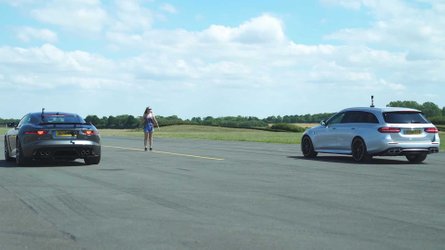 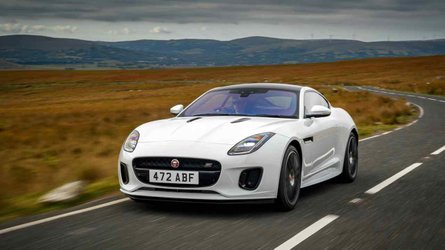 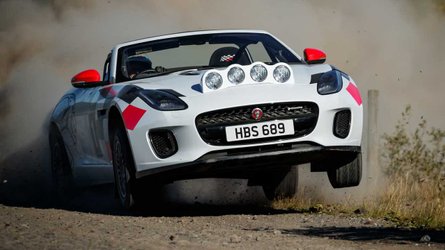 Think of the British firm’s competition history and you’d be right to think Le Mans. Rallying? Less so. But Jaguar had enough success back in the day with its XK120 that when it was looking for a way to celebrate 70 years of building sports cars, somebody in Coventry piped up that a rally F-Type might be a bit of fun.

And that’s exactly what Jaguar did. Which is why I’m currently strapped into a lightweight competition seat by a six-point harness, with flashing instruments in front of me and, perhaps wisely given what those displays are revealing, an FIA-approved roll cage above my head. Of course, that roll cage means Jaguar had to remove the F-Type’s folding roof. But thankfully, as would be the norm in February in the United Kingdom, it’s not actually raining. Why a convertible and not a coupe? The XK120 was a roadster, and, well, drivers were made of tougher stuff back in those days.

Continuing that theme, lighter door panels do without side windows. There are no touch-screen or haptic feedback niceties here, either, just functional toggle switches that drivers can hit in a hurry. There’s no electronic handbrake either, just a stick protruding from the floor that looks like someone’s misplaced a golf club. That’s for the hydraulic handbrake, a quick grab of which hauls on the rear brakes for perfect slidey turns.

Rallying is, after all, manufacturer-approved hooning. The combination of mixed surfaces and climates, and from a sprint stage to a desert crossing, means rally drivers are among the most adaptable, courageous, talented and, let’s admit, unhinged racers on the planet.

The last time a Jaguar wore such diminutive alloy wheels was back in the days of the XJS.

The F-Type’s been adapted to suit this mission. The wheels are now 16-inches, a fact that sent a ripple of discord through Jaguar’s design office – the last time a Jaguar wore such diminutive alloy wheels was back in the days of the XJS. The suspension hike only serves to diminish the scale of those wheels even further, but high side-walled, Maxport gravel-specification tyres help claw back a visual advantage. The suspension these meaty tyres hang from uses height-adjustable Eibach competition springs – with spring rates around 40 to 50 percent softer than those of the road car, – as well as EXE-TC dampers with remote reservoirs for higher travel and better thermal protection. The uprated brakes get hot.

Four-piston, AP Racing gravel-spec brake calipers clamp 11.6-inch discs and eschew ABS There’s a limited-slip differential to help control the 296 bhp that drives the rear wheels through an eight-speed automatic transmission. Given the F-Type is available with both all-wheel drive and engine choices that include the likes of a supercharged 3.0-litre V6 and a supercharged 5.0-litre V8, Jaguar’s decision to fit its rally car with a turbocharged 2.0-litre four-cylinder might seem a little bit odd. But as the F-Type’s Vehicle Engineering Manager Dave Bond admits, 296 brake horses are plenty, and the four-cylinder is lighter, which helps with the vehicle’s agility and provides a better weight balance.

He’s not wrong. Trying to get this much power to play nice on the wet, muddy tarmac is not easy. Since my rallying experience adds up to zero, I have a passenger to assist on my repeated runs through a short, tricky rally stage set up at Jaguar Land Rover’s Fen End test facility – Jade Paveley, a Junior Welsh Tarmac Rallying Championship winner.

Short shifting into second or third definitely helps the tyres find more traction once the F-Type is moving, though even then I’ve got to constantly adjust the accelerator and correct the steering to maintain a semblance of control. Unlike track driving where you can build up a rhythm, there’s little opportunity to do so on a rally stage. It’s a constant push to feel limits that change with every turn, and the variable surface making that process so much more demanding. There are countless small changes required, yet occasionally, there’s the need to be brutal; to provoke the car to turn, be it a big flick of the steering, a pull of that hydraulic handbrake, a sizeable lift off the throttle, or a combination or sequence of all of the above. It’s intense, intoxicating, and hilariously good fun.

The rallying F-Type is intense, intoxicating, and hilariously good fun.

The stage might only be about half a mile or so in length, but there’s everything from tarmac, to gravel, to mud, and each run through it changes each element and mixes them all up together. No ABS means no steering if you lock the wheels, so I have to be delicate on the brakes, especially on the greasy surface.

You feed in the accelerator delicately sometimes, then jab at it with brutal conviction at others, all in a bid to try and have the car move around – sliding, correcting in a bid for tidiness and (arguably more truthfully in my hands) preventing the unique F-Type from becoming part of the scenery. To make things a bit trickier, or just to protect Jaguar’s car, there are cones littered about the place, which serve to underline that in rallying, no two runs are the same. The stage changes each time I run through it.

In the end, only one cone paid the ultimate sacrifice for my fun. The F-Type is an unlikely, but not incongruous rally car, demonstrating fine balance and exploitable controllability up to and beyond its limits. Indeed, I can’t help think that rear-wheel-drive sports cars might just make for a far more exciting spectacle than the current rally machinery that manufacturers build. Does anyone want to be my co-driver?