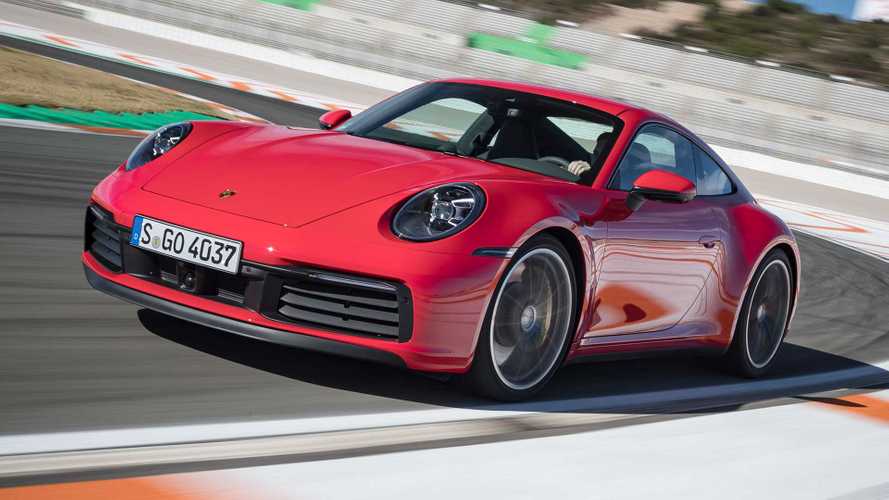 Circuit Ricardo Tormo is a 14-turn mess of mostly flat, late-apex corners that’s no match for Mark Webber and the 2020 Porsche 911 Carrera 4S. The former Formula 1 pilot, 24 Hours of Le Mans winner, and – to use his native Australian – “top bloke,” makes the Guards Red C4S dance and juke and move as I sit, jaw in my lap, in the passenger seat.

I’m out with Webber following my own six-lap, lead-follow stint at Circuit Ricardo Tormo. Yet, the two-lap blast around the Spanish circuit with the Australian racer behind the wheel highlights just how capable even a relatively mundane version of the latest 911 (the 992 to Porsche-philes) will be when it makes its way to customers. While Webber shows off the 911’s upper limits, it’s my day of testing on Spanish roads that proves the 992 is smarter and safer thanks to the same kind of small, deliberate, incremental changes that have typified Stuttgart’s most famous sports car.

That latter point is obvious from the start. Negotiate the Porsche’s odd, spring-loaded door handle and slide behind the wheel for an experience that feels quintessentially 911. Five gauges stare back at you from the low seating position, but 80 percent of them are digital – the centre-mounted tachometer is real (and real pretty), but it’s flanked by two 5.0-inch displays that feature the additional gauges.

Or they don’t. Porsche, as it has in its other new vehicles, offers an array of layouts for the twin displays, so drivers can get the exact information they need: be it a map, a G meter, or simple operating temperatures for things like oil pressure and temperature, coolant temp, and battery voltage. But no matter how I manipulate the supremely comfortable 18-way adaptive Sport seats or the tilt/telescopic steering column, the thick-rimmed wheel obstructs my view of the displays’ outer edges, which includes the fuel gauge.

That’s a minor quibble, as is my difficulty with the interfaces for the new eight-speed automatic. Like I’ve said before, I’m not crazy about the look of the electric shaver that serves as the 992’s gear selector. Still, its action is very pleasant, even if the mechanism itself is too tiny. The same is true of the steering-wheel-mounted paddle shifters – great action, but they’re tiny and not especially attractive.

Focusing on the main driver interfaces overshadows some of the more substantial cabin changes, though. For example, we’re huge fans of the new, horizontally oriented dashboard that harkens back to classic 911s. The raised centre console and its touch-capacitive controls, meanwhile, add a touch of modernity, as does the 10.9-inch touchscreen infotainment system. Both setups are very pleasant to operate.

Staring out at the relatively upright windscreen (sight lines in the 992 are as good as they’ve ever been), I roll out of Ricardo Tormo and onto the Spanish motorway. Porsche firmed up the 911’s adaptive dampers, and my Guards Red tester features the even tighter Sport suspension, which, as it does on the 991, drops the car’s ride height 10 mm, RS Spyder multi-spoke wheels span 21 inches in diameter at the rear axle and 20 inches up front. Despite this aggressive setup, my C4S is perfectly composed on public roads.

The ride is calm and unremarkable in Normal and Sport mode. In fact, Sport mode feels so well-matched to the car it quickly becomes my default setting. Switch up to Sport Plus and the suspension firms up noticeably, and the ride becomes more jarring and the damping more aggressive. Still, it stops short of feeling uncomfortable. And when the tarmac get twisty, things get better.

Along roads that barely qualify as goat paths, the 911 shows off impressive agility thanks in no small part to my tester’s optional rear-axle steering. Much as we always recommend grabbing the Sport Chrono Package, customers shopping for a 911 should dig into their pockets for this system too, as it makes the 911 feel even smaller, tighter, and its weight more balanced at turn-in. The C4S feels perfectly balanced and remarkably tossable on tight switchbacks. It’s a blast.

And of course, the engine is a gem. An evolution of the 991’s twin-turbocharged 3.0-litre flat-six (it’s literally called the 92A Evo) Porsche adds larger turbochargers and makes a number of other internal tweaks to increase output to 443 bhp and 390 pound-feet of torque. But unless your butt dyno is as sensitive as Mark Webber’s, you’re not likely to notice the extra 23 bhp and 22 lb-ft of torque. I didn’t.

The 991 and 992 feel equally capable in a straight line, even if my C4S can hit 60 miles per hour in just 3.2 seconds – 0.4 seconds faster than the 991. There’s ample low-end torque with next-to-no turbo lag, while the power carries on right up to redline. The throttle responds quickly in the four main driving modes, and, as is the case with every new Porsche since the 918 Spyder, there’s a Sport Response button on the updated drive mode dial in case you need a short burst of extra punch.

Porsche pairs the updated engine with the Panamera’s eight-speed dual-clutch transmission. Replacing the old seven-speed PDK, the gearbox’s headlining feature is that it’s ready for hybridisation, featuring a slot in the bell housing that can accommodate an electric motor. But that’s something to discuss when the inevitable 911 Hybrid arrives – for now, it’s enough to say that this eight-speed PDK is just as good as its predecessor.

Left to its own devices, the transmission is perfectly unobtrusive. In fact, it’s one of the highlights of the 992’s everyday drivability. But it’s just as capable in the more aggressive driving modes, where upshifts fire off rapidly and multi-gear downshifts are as effortless and predictable as any automatic I’ve ever driven.

My favourite of the 992’s many tweaks, though, is the new brake pedal. Porsche cut two-thirds of a pound from it, rebalanced the pedal’s travel ratio, and replaced the hydraulic brake booster with an electric one. Sounds pretty minor, but the impact is dramatic, especially on a car with carbon-ceramic brakes, like my tester. There’s simply none of the grabbiness common with CCBs, and there’s far more feedback (although these brakes do still squeal like a piggy if they aren’t properly warmed up).

This all comes together beautifully on Ricardo Tormo’s 14 turns. The 911 feels capable and willing on track despite my fists of ham, with the brakes offering fade-free performance and the tyres providing plenty of grip. The steering is revelatory, with a more direct ratio – 14.1:1 in rear-steer cars like mine – and the perfect amount of weight. This is an electric rack, but good luck finding any problems with that. Feedback is everywhere, and you can feel just how much grip each individual tyre has available, even if, like me, you lack the spine to exploit it.

Everything we’ve talked about here is as expected. But Porsche has made the 911 far smarter for 2020, adding all sorts of stuff expected on a modern car (active safety systems, night vision technology, and so on). Yet, the ace in the new 911’s safety-minded sleeve is its new Wet Driving mode.

On a wet handling course (really, just Circuit Ricardo Tormo’s karting track with a bunch of sprinklers wetting it down), Wet Mode gave the 911 a level of poise and wet-weather capability few performance cars can match. The system retards the throttle, adjusts how the 3.0-litre flat-six’s torque arrives, and lowers the threshold for the ABS. On all-wheel-drive models, such as mine, it also shifts additional power to the front axle. To put things simply, I couldn’t get the 911 to break loose on the wet handling course no matter how stupidly I drove. At the same time, I’m not really sure why wet mode exists.

A colleague at the event summed Wet Mode up perfectly: “If the fate of the world depended on me getting a 911 down a wet mountain road as quickly as possible, Wet Mode might matter.” I couldn’t agree more. If the conditions were that bad that I needed electronic assistance to keep the car pointed straight, why wouldn’t I just slow down? Wet Mode feels unnecessary at best, while at worse, it could instill a false sense of security in overaggressive drivers. That said, we’re eager to sample Wet Mode in other conditions such as snow, and with only the first stage of the system – the element that engages automatically – running to see just how useful it is in everyday driving.

While my time with the 992 was all too brief, it was clear after my stints around Valencia and on the track with Webber that Porsche packed this car with the kind of thoughtful, deliberate changes it’s renowned for. But it’s not so much the changes for the Carrera S that are exciting. It’s the promise that this generation has – even in its infancy. From the inevitable Carrera, GTS, Turbo, T, GT3, and GT2 variants to the hotly rumoured hybrid, plug-in, or all-electric versions, there’s a lot to look forward to with the latest 911.