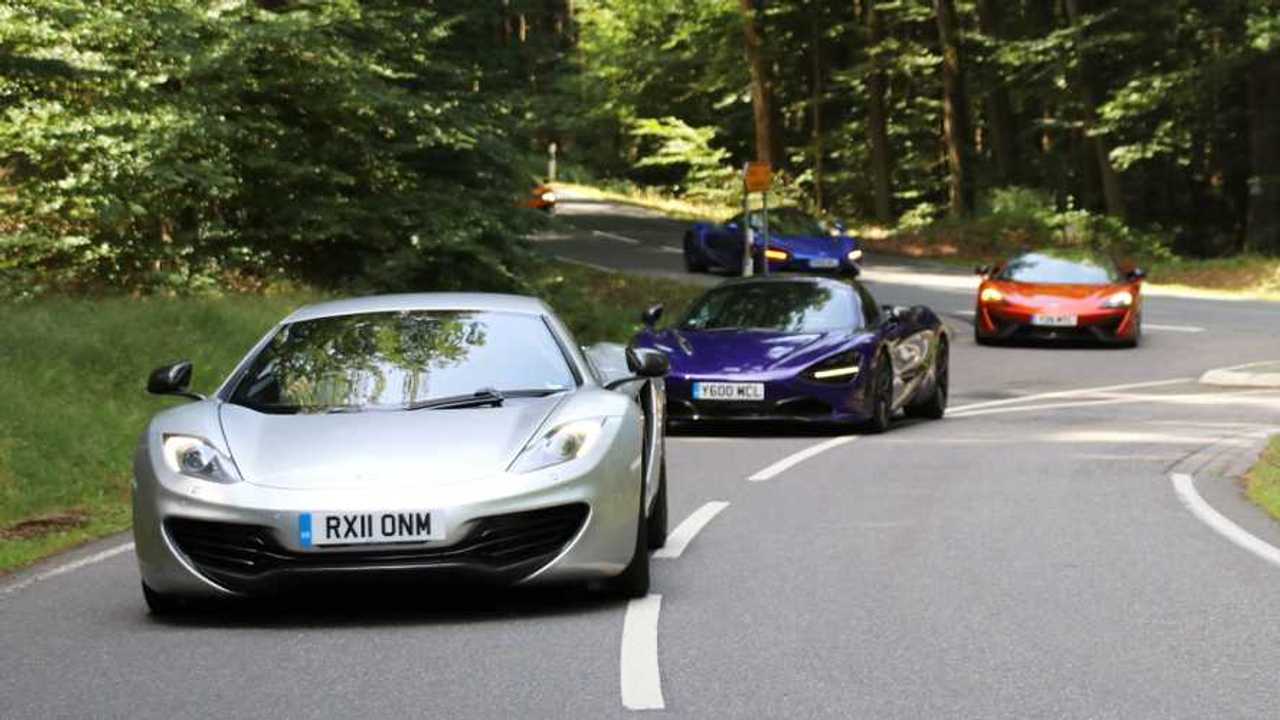 McLaren has come a long way in nine years.

If you want to know how to make an airport parking garage as glamorous as possible, then just throw in a few British supercars, play a little with the acceleration pedal (and the gullwing doors), and then let the wild caravan whip out of the garage in a fierce, rustling blur. And if you’re worried about getting out, then simply escape under the gate.

By now, you’ve probably realised that I am in the middle of a martial McLaren conglomerate. The supercar manufacturer from Woking thought it was time to show what it had learned since its 2009 resurrection, twelve years after the legendary F1. We had nothing against actively supporting an evaluation that put the MP4-12C, 650S and 720S in one pile. Admit it, you wouldn't necessarily run away screaming either.

If you're even a bit interested in sports cars, you'll know that the new McLaren era began with the MP4-12C, hitting markets in 2011. The odd name may bring up thoughts of a groundbreaking dynamic washing machine, but this was actually McLaren's idea of a Ferrari 458 competitor. In all its Formula One nerdiness, McLaren let us all know that it built the best supercar in the world and that it could scientifically prove it. Not everyone saw this in a similarly professional way, though. For many, the 12C was too much about lap times and too little about fun.

Oh, how times change. I flatten a tight mix of straight lines and serpentine-like curves somewhere around Lake Constance and if there’s one thing I can complain about, it’s not a lack of excitement. The 12C is everywhere. Its front axle gravitates towards every kind of bump and it absorbs even the smallest undulations. The steering fidgets between the bales like a stressed eel, conveying a feeling that I’ve rarely experienced in "modern" vehicles. Now, of course, it’s usually outrageous to deny modernity to a seven-year-old car. In this case, however, I think it’s okay – with some conditions. First of all, RX11 0NM – as its number plate proclaims it – already wears a sympathetic layer of patina, due to its glorious and literally unique history.

Yep, a look at the papers shows it beyond doubt: this is MP4-12C number one. Honestly. The first modern day Macca ever built. I swallow briefly and forget how I’ve treated the good old girl through the last few curves. This 12C already has over 37,000 miles on its clock. The brown, somewhat, um, simple interior suddenly looks cool, and only features what you really need.

The brown, somewhat, um, simple interior suddenly looks cool, and only features what you really need.

The leather is a bit greasy, the seat rails are rusting, not every button reacts when pressed, and the climate controls aren’t working all that well. The navigation system doesn't really work either, although that’s more of a blessing than a curse in the case of an early McLaren. But still, this slightly run-down workhorse of a supercar can’t get much cooler. This thing was a press tester, a motor show babe, probably also a development bitch. I don’t really want to know just how many journalists, customers, and managers abused this car over the past years, but the 12C seems to have taken it on the chin. And it’s definitely still got it.

Even compared to today's increasingly absurd performance vehicles, 592 bhp and 443 pound-feet of torque from a 3.8-litre, twin-turbocharged V8 pushes like something evil. Following 1980s-esque turbo lag is face-deforming power of surgical proportions. The 12C’s engine just explodes and it doesn’t stop until the 8,000-rpm redline. The whole experience is accompanied by a sound that is more aggressive than really beautiful. The first McLaren doesn't vee-aight its way straight to the heart like a Ferrari or AMG, but the turbos whistle a song that definitely remains in memory, hissing and breathing and blowing like crazy.

The crazy speed paired with the almost obtrusively nervous nature of the 12C means that you work quite hard for your money. But the reward – straight-line velocity, neutrality, and cornering speeds – still shock today. What a lovely piece of supercar this is.

Despite its age, the 12C still has plenty of charisma. But it’s time for the next generation, so our convoy dips into a rest area, ready to change up. It’s time for the 650S.

In April 2014 the 12C was replaced. Although it was in principle only a major facelift, the 650S's behaviour was quite enhanced rendering an immense increase in driving pleasure. The ultra-lightweight carbon chassis, the super-smart hydraulic suspension and the beastly engine are virtually the same and yet you feel quite a difference. The V8 was given an unusually high boost in output to 641 bhp and 500 lb-ft, the suspension received tighter spring rates for more playful handling and there were now Pirelli Corsa sports tyres and carbon ceramic brakes as standard. It was also given a completely new fascia design in the style of P1 hybrid hypercar. The crescent-shaped LED headlights also look more compliant on my 650S Spider tester, but not everybody necessarily liked it that way. I think it adds more drama to the 650 but takes away some of the potential to become more of a classic than the soberly styled 12C.

While driving, the 650S’s twin turbochargers build boost even more absurdly. In the mid-range it pushes just that little bit stronger and towards the top, it seems to literally burst out of sheer urge. It will probably forever remain a mystery how McLaren manages to build turbocharged engines that rev to 8,500 rpm with such greed.

The fact that the 650S’ springs are stiffer than the ones in the 12C isn’t really noticeable. Both offer suspension comfort that is still second to none in this class. Otherwise, this Spider feels a bit less jittery in the steering, altogether a bit calmer and more grown up – it sticks better and has more grip. Nevertheless, its handling seems more organic and transparent if you challenge it. The steering feel is among the best money can buy (McLaren still doesn't use electromechanical steering systems) with plenty of feedback through the wheel.

What would bother me personally, especially if I had spent the 255,000 Euros McLaren wanted to see for the Spider in 2014, is the cabin. The interior isn't a real eyesore, but it's not particularly engaging either. The instruments look outdated for a car just two years old and the operation of the infotainment/navi system takes at least some getting used to. On the other hand, the view through the windscreen, which (like in every McLaren) stretches so far down you feel like a GoPro mounted on the front splitter, is absolutely glorious. It reinforces the pure, immediate, completely captivating driving experience, which still hardly any other car can do as well as the 650.

Unless, of course, you place yourself in a 720S. It’s the first time the company has built a second generation of one of its vehicles – the 650S – but it’s much more than an evolution. You already notice that by just looking at the thing. Up to this point, the cars from Woking were always more convincing because of their technology than because of their appearance. Here, for the first time, we have real poster-over-your-bed material that doesn't have to hide behind any Lamborghini, Ferrari, or Bugatti eccentricity. You can see more of its carbon structure, the gullwing doors stretch far into the roof, and in track mode the instrument display turns into a kind of slot and shows only engine speed, vehicle speed, and gear. Yes, even England can do theatre. And finally, McLaren can do an interior. The 720S’s cockpit is a different world in terms of quality and operation.

A total of 91 percent of the 720S was new when it entered the market in 2017. Everything is lighter (less than 1,300 kilos dry), stiffer, smarter. The revised hydraulic chassis now uses 21 sensors, scans the road, measures the tyre contact area, and then tells the dampers what to do. The engine now displaces 4.0 litres and packs 710 bhp (or 720 in metric form) and 568 lb-ft of torque. It can reach 62 mph in 2.9 seconds, but often less has been measured.

I don't know anything that accelerates as angrily as this car. The throttle response is noticeably more direct, the turbo lag noticeably smaller. The 720S doesn‘t just gain speed, it eats up the horizon. Zero to 186 mph happens in less than 20 seconds – McLaren’s monster morphs more than accelerates. The acoustics, though, still don‘t give goosebumps worthy of a £200,000, 200-plus-mph supercar. Not that the high V8 scream is completely unattractive, but a little more fullness and timbre would definitely suit this 710-bhp lunatic.

Not that the high V8 scream is completely unattractive, but a little more fullness and timbre would definitely suit this 710-bhp lunatic.

Enter the first chunk of bends and the lack of noise suddenly fades into the background. Each grain of dust on the asphalt flickers through the wonderful Alcantara steering wheel directly into your palms and everything your happy limbs are allowed to control in this car is perfectly weighted. The 720S is firmer, not quite as fluffy and super light as in a Ferrari 488. That makes it not quite as playful, but somehow more involving.

More involving and sensitive than its two ancestors for sure. The MP4-12C and 650S are incredibly good sports cars, but the 720S is one of the best ever built. One of the greatest achievements is that – besides the ever evolving levels of dynamic perfection – McLaren has discovered its sense of humour. Yes, this unfaltering, infinitely focused precision tool also makes a fuss if you want it to. It slides around, moves its tail, even at speeds that don't scream "suicide". A 488 is probably easier for inexperienced pilots to move spectacularly, but I think the 720S is the faster vehicle in experienced hands.

In just about ten years of time McLaren went from "Who the hell needs another super sports car manufacturer?" to earning deep respect for an extensive lineup of highly competitive vehicles that ranges from the Porsche-911-rival 540C to the multi-million-dollar Speedtail hypercar.

Even though "my" silver MP4-12C rather radiated pre-production charm, it already clearly showed where McLaren wanted to go: Lightweight construction, crazy thrust, sensational steering feel, superb handling, and creamy suspension comfort. The 650S does all this a little bit better, but like the 12C, the interior feels inappropriately cheesy. The 720S is a new level in every respect.