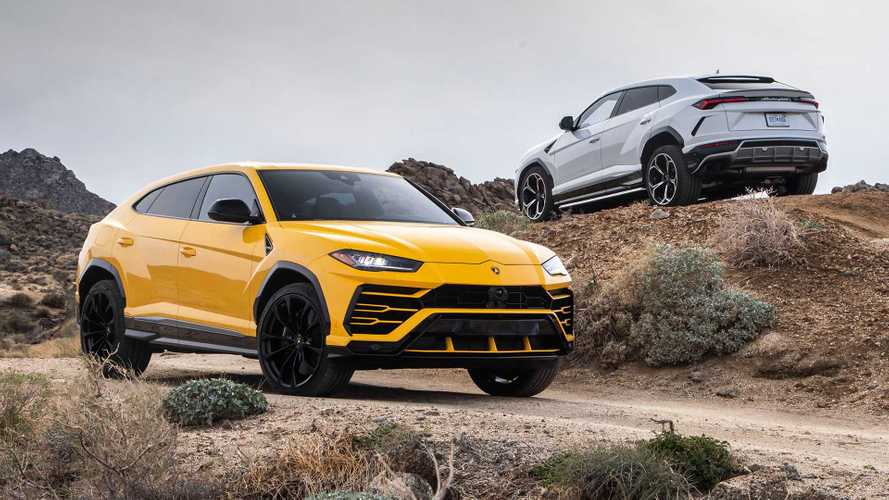 Lamborghini’s second SUV has the brand’s DNA, but is plenty civilized

Conspicuous consumption all but assures the 2019 Lamborghini Urus will be a hit. Low production numbers and high demand make for an exciting option for drivers who need something more glamorous than a Land Rover Range Rover Sport SVR, but not as outlandish as a Rolls-Royce Cullinan. After testing Lamborghini’s new SUV in the desert outside Palm Springs, California, it’s safe to say the price is right and the performance is real – this is both a true SUV and a true Lamborghini.

The Urus’ look can be described as seriously Lamborghini in the same way that the Porsche Panamera can be described as seriously Porsche. The design reflects the brand, as it should. Lamborghini’s Head of Design Mitja Borkert, did a good job of taking design cues and influences from throughout Lamborghini’s history, incorporating lines from as far and wide as the LM002 – the brand’s first SUV, affectionately known as the Rambo Lambo – and as far back as the Miura. The Urus is hexagonal as hell and angle-y as can be, but all the sharp edges come together in a symphony of cohesive design. It’s a form that looks as if it’s in motion even at a standstill.

The cabin is a work of art, although it’s a sculpture we’ve seen before from the Volkswagen Group. Function follows form, especially in the aircraft-like drive mode/gear selector apparatus. There’s some applied design, some unnecessary flourishes, but nothing objectionable. Mostly, luxury is everywhere in a landscape of quality finishes, stitches, surfaces and hexagonal design elements. It’s an environment of rich high-end leather, Alcantara, aluminium, carbon fibre, and wood finishes (although thankfully, not all at once).

The LCD instrument cluster and the dual screens – one 10.1-inch display and another 8.6-incher – of the Lamborghini Infotainment System on the centre console make for a glass-cockpit effect, but analogue switchgear controls many of the most essential driving functions. The buttons are easily identified by touch and therefore easy to change in a flash. But you’ll use the touch screens to control most of the creature comforts, navigation, and entertainment controls.

The Urus’ cabin is plenty roomy, with adequate legroom, headroom, and cargo space (617 litres). Sometimes good cabin specs still result in cramped quarters, but that’s not the case here. There’s plenty of room to move around and get comfortable, lots of elbow room, and the cockpit is well sorted and spacious beyond what the exterior lines and crouched stance suggests.

The Urus boasts a class-leading power-to-weight ratio, four-wheel steering first seen in the Aventador S, all-wheel drive, active rear torque vectoring, an adaptive air suspension with active dampers, and a continuous roll stabilisation system. The Lamborghini-tuned powerplant is an all-aluminium, twin-turbocharged 4.0-litre V8 engine that makes 641 bhp and 627 pound-feet of torque. The eight-speed automatic transmission features short ratios in the lower gears and taller ratios in the higher gears. All this gets you to 62 mph in 3.6 seconds, to 124 mph in 12.8 seconds, and on to a top speed of 189 mph. Simply floor it, and the Urus flies.

Key to the go-anywhere, do-anything nature of the Urus is Anima, the electronics platform that controls the Urus’ drive modes. There are three on-road modes: Strada, for everyday general-purpose driving; Sport for increased agility and responsiveness; and Corsa for full-throated, full-performance track-ready precision handling. And off-road? There are three more modes: Sabbia, for control in the desert sands; Terra, for cabin comfort and control in the dirt; and Neve, for capable control on slippery, snowy surfaces. The seventh mode, Ego, is yours and yours alone – Lamborghini’s version of an Individual mode. You set your own dynamics for steering, suspension, and traction.

The carbon ceramic brakes are massive, with 10-piston front calipers and 17.3-inch front rotors, and six-piston stoppers clamping on 14.6-inch rotors in back. They provide the incredible amount of stopping power it takes to bring the 4,800-plus-pound Urus to a dead stop from 60 mph in 108 feet.

Putting these brakes to the test at the Thermal Club outside Palm Springs was a simple exercise: Floor it until the speedo reads 75 mph, get on the brakes 100-percent to the floor, swerve through an obstacle gate, and screech to a stop. Sounds like it might make your palms sweat? In the Urus, you smile. In the real world, of course, stopping this fast invites imminent danger from behind, so check the rear-view first.

In slalom exercises and later in the chicane, the Urus was composed and capable; feeling planted, it slung low and dug in. The Urus cuts around cones without much roll or dive, with the active suspension system measuring and reacting to all the forces at play. The result is nimble manoeuverability that inspires confidence in fast-paced handling. In cornering, the four-wheel steering provides a new sensation, as if participating in a magic trick. The Urus handles smaller than its size might indicate.

In cornering, the four-wheel steering provides a new sensation, as if participating in a magic trick.

We took the Urus off-road on a few mostly flat, dusty laps out in the Colorado Sonoran desert, outside of Indio, California, on the southern edge of the San Andreas Fault Region. We actually drove over the fault itself. Twice. The Urus would be a reasonably good car to experience the “big one” in, we thought at the time.

Anyway, off road the Urus could have done a lot more than what we were allowed. With the right tyres, of course. Lamborghini worked with Pirelli to hash out seven new sets of tyres specifically for the SUV, so yeah, there’s your track day tyre and there’s your off-road tyre and then there’s your everyday tyre for driving up and down Rodeo Drive. We’re not for keeping three or four sets of tyres mounted up on rims around the house, slipping them off and on much as Mr. Rogers goes from oxfords to slippers, but Urus customers should no doubt appreciate the selection of rubber and probably have a ready solution to this first-world problem.

All these tyres, all these drive modes, and all this cabin space do a few things for Lamborghini. First, geography. The Urus works in a lot of places that no other Lambo would. Snow, for one, and the parking lot at Tescos for two. This Lamborghini, now a daily driver for real, works great in either place. The Urus is inherently practical. It is a daily driver, and it could easily be the only car you own. Yes, it could be simply snatched up and added to the billionaire’s collection, but it feels a little too mass market for that. This is a prestige daily driver, and among the best out there. The pricing, starting at £164,950 and surely extending far above that, feels a bit like a bargain, and, for the likely buyers, it’s really just a bit of a financial summersault above the SUV that they probably already overpaid for.

Does it beat the Range Rover Sport SVR? On paper, and in many ways, yes. In every way that a Range Rover is easily recognised and well understood, the Urus is mystifying and compelling. The 707-bhp Jeep Grand Cherokee Trackhawk? Well, that’s a Jeep, so there ya go. And for all its worth, the Bentley Bentayga – an SUV the Urus shares its platform and many other oily bits with –, is just a little too anonymous for the price.

Does it beat the Range Rover Sport SVR? On paper, and in many ways, yes.

The Rolls-Royce Cullinan has the (ridiculous) looks, and it achieves a higher class of luxury, but it does so at almost twice the price. And don’t think anyone really wants to be seen parking a Cullinan at Tescos on a crisps run. The Rolls just isn’t right for that kind of business, but the Urus could get away with it, especially in some of the refined colours that we had out in Palm Springs: conservative white, blue, and gray.

Is that to say the Urus blends in a little bit? Yes, it does. Too much? Well, maybe, but Lamborghini has a solution for that: a full palette of look-at-me colours will, naturally, be available. If only you could change the colour as easily as you can change out those tyres.

The 2019 Lamborghini Urus does so much that is so spot on – and the few things it does poorly can be explained away by simply shrugging, “Lamborghini” – that there’s no doubt the Italian brand will sell every last SUV it builds. Customers will love the Urus. And for those people, the Urus will love them back.