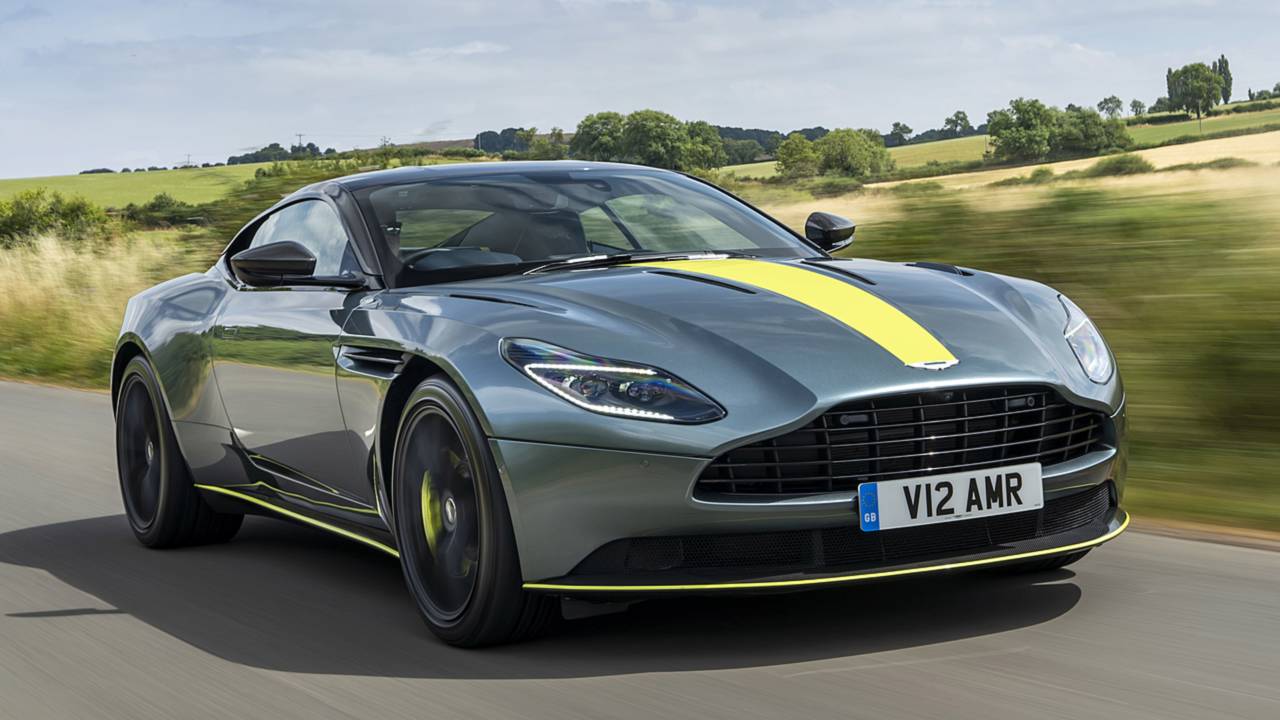 Aston Martin Racing's know-how has been applied to the ultimate GT car...

When Aston Martin was plotting the upgrades to its flagship V12-powered DB11, it gave its in-house racing team the opportunity to make its mark. And this is the result: the £175,000, 630 bhp DB11 AMR.

Designed to be more “vivid” than the ‘standard’ V12 it replaces, the AMR offers more power than its predecessor, as well as tweaked handling and a few race-inspired design tweaks. But does that mean the Aston’s famous mile-munching capabilities have been diluted? We went to find out.

From any angle, the DB11 is gorgeous, and the AMR tweaks do nothing to damage its looks. Perhaps that’s because the changes are fairly minor. There are a few black touches and carbon-fibre details, but otherwise it’s all fairly standard DB11 fayre.

Except the stripe, obviously. Finished in lime, it runs down the centre of the car, complementing the equally bright detailing that adorns the diffuser. Those unsold on the racing aesthetic will be pleased to know that the stripe’s optional, and you don’t have to have one.

It does work well with the interior, though, which features lime stripes on the seats and ‘AMR’ stitching on the headrests, along with the usual mix of leather, Alcantara and carbon-fibre.

Space is acceptable, albeit not abundant, provided you accept that it's no four-seater. There are rear seats, but you wouldn't inflict them on your worst enemy. Even kids would find them very cramped, so they’re more usefully employed as parcel shelves, snugly accommodating small bags.

In the front, though, it's a perfectly comfortable two-seater. There's plenty of adjustment in the seats and more than enough headroom, even for members of the six-foot club.

The only catch is the seats themselves, which are very supportive on a track and pin you in nicely, but on the road they’ll feel a tad narrow for anyone with a body fat percentage greater than zero.

Your IQ will have to be significantly higher than that, however, if you want to operate the plethora of buttons and the Mercedes-derived central infotainment scheme. Calling it ‘a bit fiddly’ is an understatement, controlled as it is via a strange combination of laptop-style touchpad and rotary control wheel - not ideal when you’re flying through the Riviera.

Whichever way you cut it, the AMR is monstrously fast. Almost supercar fast.

By way of a comparison, the high-tech hybrid Honda NSX is all out of ideas at 191 mph, and even the 205 mph Ferrari 488 GTB can’t quite match the big Brit.

And the Aston feels every bit as hairy chested as the numbers suggest. It’s neck-breakingly fast in its softest ‘GT’ mode, but in the sportier Sport and Sport+ modes, the acceleration is nothing short of savage.

The fat rear tyres can barely deal with the 700 Nm of torque, but once they’ve stopped squirming under the immense force, they’ll propel your stomach into your spine almost instantly. Just a twitch of your right foot is enough to send the speedo into licence-losing territory before you know what's happened. It's an aural assault, too, battering your eardrums with a V12 howl as the revs build, then cackling with petrol-fuelled glee during the gear shifts.

That animalistic soundtrack is a sign of how the car corners, too. In GT mode it's supple and stable - more suited to fast sweeping bends and country roads than the tight turns of a racetrack - but firming up the suspension and switching to Sport or Sport+ makes it twitchy and pointy; much more like a powerful supercar.

Forget the racing connection and the stripe. The DB11 AMR is not a road-going racer - it's still very much a big grand tourer - but one with a strangely split personality.

In GT mode, it's fast but docile, firm but never uncomfortable. It's a big, luxurious grand tourer, perfect for flying down the autobahn at three-figure speeds. But as soon as you strip the electronic driver aids away, it becomes a snarling, savage animal. It certainly has no compunction about chewing up the unwary and spitting them into the nearest ditch.

So if you just want a smooth, sexy Aston that looks, sounds and goes like the ultimate GT car, buy the ‘standard’ DB11 - the V8. But if you want something a bit more exciting; something that can be brutal and breathtaking when you want it to be, yet still benign when you don't, the AMR is the car for you.