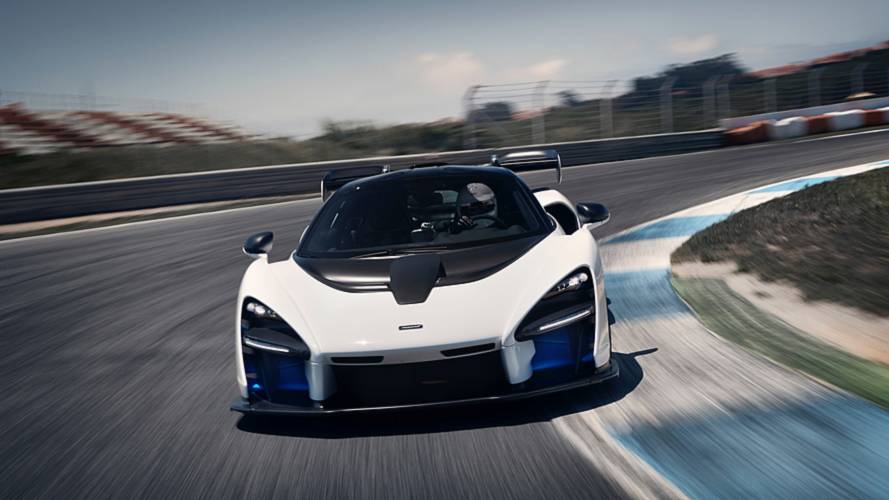 At the tail end of last year we were invited by McLaren to a Top Secret Location in London to get an early look at something rather special. Lurking in a darkened studio was a razor-sharp silhouette unlike anything in the brand’s portfolio to date. As the lights came up and the polarising McLaren Senna was revealed, a feverish excitement filled the air. Sat before this small collection of journalists was not only the most extreme McLaren road car ever made, but also one deemed worthy of the Senna name. McLaren was clearly confident in its latest creation's abilities.

As the months ticked by we got up close and personal with the £750,000 supercar and even had the chance to drive a validation prototype at Silverstone – but today is the day we pass judgment on the finished article. This 789bhp hypercar awaits at the famed Estoril F1 circuit in Portugal, home of Ayrton Senna’s first grand prix victory.

The McLaren Senna isn’t a pretty car – at least not in the conventional sense. It’s not curvaceous or pebble-like in design, nor particularly elegant. The equation of form and function is not a balanced one in this case and that’s because the Senna was given one undiluted mission: become the fastest road legal car the company has ever made. This dedication to its cause results in one of the most striking cars to ever grace the asphalt.

Every line of the Senna has earned its place, with nothing serving as excess. This extreme bodywork conducts the air to this car’s will via ducts, channels, splitters, an intricate double diffuser and that huge rear wing. Much of the fast flowing air is channeled through the car, as opposed to around it, allowing active aerodynamic surfaces hidden within to continuously trim the car for optimum balance – in this respect the McLaren Senna is more akin to an aeroplane than anything capable of driving on public roads. The Senna’s command over the elements results in an impressive 800kg of downforce at 155mph. That’s 40 percent more than a P1! This car isn't beautiful like an oil painting, rather it's scientifically beautiful like the space shuttle or the Millau Viaduct.

Inside, the same size-zero ethos continues with a cabin that justifies its existence. Almost every surface is weaved from carbonfibre to form a focused cockpit. A pair of man-eating race seats hold you in place and, despite appearing to have minimal padding, are surprisingly supportive. They weigh just 3.36kg each, almost as impressive as the door assembly that tips the scales at just 8.8kg. You sit low in the car with a true sense of being plumbed into the chassis as you tighten your harness. However, just like all McLarens of late, visibility is exceptionally good for a car of this calibre. Large windows are accompanied by clear lower sections in the door that, just like nose windows on a helicopter, help the driver gain a better perspective of where the car is positioned.

Press the roof-mounted starter button to fire the 4.0-litre V8 engine into life. It erupts with bluster before settling to a smooth idle in anticipation of your next move. Race Mode was the obvious choice for our environment and after a series of electronic bongs the Senna begins its transformation. The chassis drops by up to 39mm and now hugs the ground to harness the under-car vacuum it creates at speed, its engine and gearbox are set to maximum attack, the steering becomes more sensitive and the suspension tightens up to eradicate roll. This state of tune is so extreme that the car is no longer road legal, so this is strictly for track use only.

Snagging the right-hand paddle, first gear is engaged and we set off, soon reaching the pitlane exit. Take a deep breath before squeezing the accelerator because you are about to light the fuse to a 789bhp missile. The Senna leaps into action without hesitation, its twin-turbocharged V8 engine producing enough thrust to get you from 0-62mph in just 2.8 seconds, or 124mph in under 7 seconds. The combination of a car that weighs less than 1,200kg, sticky Pirelli P Zero Trofeo R tyres and unrelenting torque will have you struggling to find an expletive that adequately covers the situation. The surge of acceleration is undiminished even when approaching 200mph...160, 170, 180, it just keeps going with the same enthusiasm.

But more impressive than the way it goes, is the way it stops. Hurtling down the main straight at Estoril is exhilarating, but you’ll soon find turn one at its end. Lean hard on these feelsome next-generation carbon ceramic brakes and you’ll also deploy the rear wing as an airbrake, generating 2.1g in the process. You can actually feel your internal organs being rearranged as the rest of you is pinned place by your belts. This car’s stopping power has to be experienced to be believed, especially as 124-0mph in less than 100 metres appears to be the work of science fiction when written down.

You only need little inputs to change the Senna’s direction, something it does with conviction and composure. It responds to instruction so rapidly that the car simply becomes an extension of your thought process. This fly-by-telepathy nature is what separates the Senna from other mere supercars. It is so focused, so primed to execute the task at hand, that you often forget that it is road legal at all. Rather surprisingly this all makes the Senna an easier car to drive at a pace than a 720S. It is just so intuitive to use with a steady feed of communication coming back to the driver, making for a predictable machine.

Sadly you are too late. Each of the 500 examples is spoken for, and considering that the final car sold for £2 million at a charity auction, we would expect used values to far exceed the list price. Those who are lucky enough to be waiting to take delivery can rest safe in the knowledge that the McLaren Senna is a worthy addition to any garage.