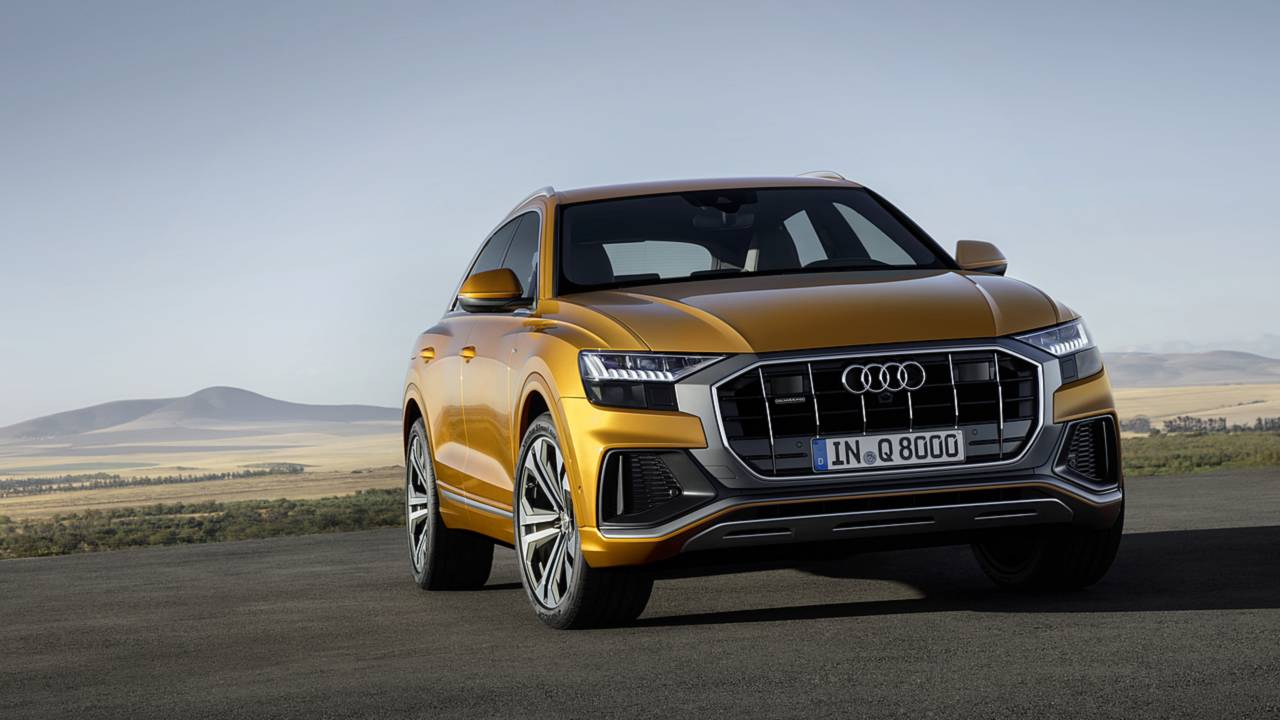 It’s hard to believe that it’s been 10 years since BMW first launched the X6 – the so-called ‘sports activity coupe’ defined a new level of conspicuous consumption, offering a huge footprint with massively reduced practicality. Now Audi is getting in on the action with its new Q8, a range-topping halo SUV for the Q-branch with sleek coupe-style styling. But wait – this car has a decent-sized boot, room for five and it actually looks pretty good…did Audi get the right memo?

More from the Q8:

We’ve been talking about aggressive styling from Audis for years, and we’ve grown used to – gasp, maybe even slightly blasé about – what was once shocking. Fortunately the Q8 shakes things up a bit, with an assertive, angular design that defines a new look for Audi’s SUV range.

Park the Q8 near a Q5 or Q7 and already they’re going to look slightly bland and unassuming. The Q8 has some beautiful details, although some might be offended at the way the front end folds around a grille that’s bigger than ever.

The rear light treatment in particular is something of a treat – which is good, because that’s what most people will be looking at. We’ll see it on a few more models yet, it’s the new signature for Audi’s premium products. If we compare Q8 with Q7, the new car is 66mm shorter (mostly lost from the rear overhang), 35mm lower (the roof is flatter) and 27mm wider. The neat frameless doors all round add some credibility to the coupe claim, but only a little.

The cabin is large, with plentiful room for four to tour in comfort, each passenger getting their own climate zone and heated seats. There’s space for a fifth person, but why suffer? There’s lots of room for baggage too, the 605-litre boot expanding to 1,755 litres with the seats down.

The quality of materials is predictably good – there’s a reason that the Audi interiors cliché still prevails – and the new three-screen setup that debuted on the A8 is suitably fancy for a halo SUV that Audi thinks is going to outsell its flagship limousine.

Inside, you peer out from the driver’s seat over a wide, flat bonnet, and yet on the move the car doesn’t feel anywhere near as unwieldy as the Q7 can.

You’ve got seven different driving modes to play with, that alter the throttle response, suspension, handling, etc. The Q8 corners flat in all of them, the electronics and trick air suspension exerting masterful control over the bulk of the car. The adaptive air suspension can raise the car by 50mm should you feel the need to go off-roading – the Q8 can handle a certain amount of rough stuff with panache.

The ride quality is hit and miss depending which mode you go for – the sporty settings feel like they’re designed for a car that can offer more than the Q8 has to give. The eco mode offers a more gentle throttle mapping and will allow the car to coast when you come off the gas down an incline. Comfort mode smooths out the bumps and even makes for a noticeable decrease in road and engine noise, as if hearing road rumble makes for a more authentic racing experience.

You get rear-wheel steering as an option on the Q8, which makes the car feel even more lithe and agile at speed. At over 2,000kg it’s a heavy beast, but the steering does its best to smother the sheer physics. It’s only when you try to push on through a winding set of country bends that you’ll find the Q8 experience starting to fray at the edges.

Refinement is another predictable Audi box ticked, with the engine only making itself known under the heaviest of accelerations. The 3-litre diesel we drove didn’t feel quite as perky as the numbers suggest, but we were testing the car at altitude, which does sap the life out of engines.

The 3-litre V6 diesel (50 TDI) with 282bhp is the only one available at launch – a 3-litre petrol badged 55 TFSI and a less powerful 3-litre diesel badged 45 TDI arrive early next year. An RS Q8? Keep those fingers crossed. All Q8s are set to come with Audi’s latest 48V mild-hybrid system to enhance efficiency – the beefed-up battery allows for enhanced stop-start, coasting and other features.

It’s taken 10 years, but finally we’ve got a worthy addition to a pointless segment that might have some worth to it after all. Objectively, of course it’s outrageous, and the world certainly doesn’t need another SUV. Does the Volkswagen Group even need another SUV? Three of this car’s biggest competitors are going to be the Lamborghini Urus, Porsche Cayenne and Bentley Bentayga on the exact same platform.

But then that sort of criticism would be missing the point – there’s a market out there for this car, and the Q8 is bound to appeal to the sort of people who would ordinarily be in the market for an A8 but want to drive themselves. The Q8 is wide and sleek and memorable, which is just as it should be for this SUV range-topper.

If you’re looking for a grand tourer, then by all means get in there early – if you want something with a bit more pep, then it might be worth hanging back to see what the RS badge brings with it.

Audi Q8 Spied On Video Racing To The Ring