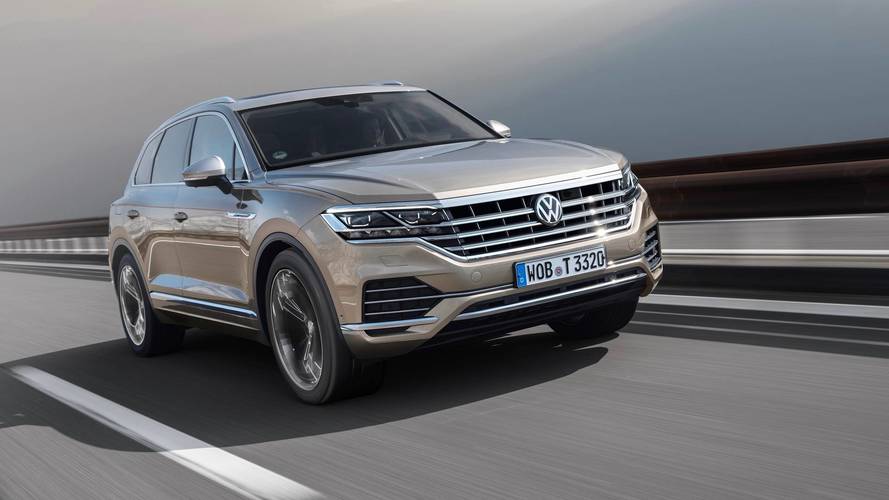 As a sign of the current trends and times, Volkswagen’s newest flagship model is not the distinctive Arteon saloon. Instead, that honour now belongs to the all-new Touareg SUV. It faces tough competition, but the gadget laden third-generation Touareg is using technology to its advantage.

Volkswagen has sold over 45,000 Touaregs in the UK since its introduction in 2003 — and many more globally. This new model wants a bigger slice of the pie and so VW has brought its A-game to the SUV party. It sits on the same platform as the Audi Q7 and Bentley Bentayga — so it’s in good company. Despite being larger than before, it actually weighs 106kg less thanks to a body that is now 48% aluminium.

It’s quite a smart looking thing, don’t you think? While its huge chrome grill that encompasses the headlights is domineering, the rest of this SUV is more subtle than some rivals. Polite creases and soft curves create a grownup look that isn’t desperately trying to capture every passerby’s attention. Sure, it is a bit showier than its subdued predecessor, but it retains a sense of maturity. Some may argue that an SUV should be a style statement, but those who aren’t keen on vivid paint or huge chromed alloys will value the Touareg’s candour.

The new cabin previews what is to come for the rest of the Volkswagen range in the form of the Innovation Cockpit. Formed by combining an optional 12-inch digital drivers display with a huge 15-inch touchscreen that’s angled toward the driver, it rivals the large screen found in Teslas. Not only is there plenty of real estate to take advantage of, but it runs new software that allows you to customise your home screen with various widgets. Some functions are hidden within multiple menus, pretty frustrating at first, but once you arrange it to your liking you’ll find the system responsive and full of useful features. Other tech includes massaging seats, four-zone climate control and trendy mood lighting.

It’s a comfortable place to spend time, with good quality materials lining the cabin while the large windows serve to amplify a sense of space. The rear bench seats three with the middle passenger needing to tackle a low but wide transmission hump. Open the tailgate to reveal enough space for a dog or two - there’s actually a little more room than in an Audi Q7. Or, if you fold the seats flat, a plentiful 1,800-litres is yours. The trouble with an SUV is that, while they might offer loads of luggage space, you have to lug whatever heavy item up to the height of the boot before setting it down. Thankfully the Touareg can squat 40mm at the rear to aid loading, providing you opt for air suspension. There’s also an electric tow hook available if you need to pull up to 3.5 tonnes.

We took the 3.0-litre V6 TDI for a spin, and despite the diesel who-ha, it’s still expected to be the best seller. After a moment of spooling the turbo, the 282bhp engine pulls cleanly thanks to a healthy 443lb ft of torque. Power is sent to all four wheels with the aid of a silky smooth 8-speed automatic gearbox which subtly swaps cogs in the background, although sudden acceleration does catch it out at times. It's a tranquil drive with road noise being well suppressed, and only a little wind noise from the A-pillars intruding at motorway speeds. Selecting Comfort Mode keeps the steering light and our car’s air suspension supple enough to cushion the few road imperfections we could find on Austria’s smooth Tarmac. A more conclusive test on our broken British roads awaits, but we reckon it’ll acquit itself well.

The car’s Adaptive Cruise Control and array of supporting systems are well worth a mention. With everything engaged the Touareg will keep you in your lane, maintain a safe distance from the car ahead and adjust to changing speed limits. It also uses GPS to slow the car for tight bends, junctions and roundabouts — clever stuff.

Around town the Touareg has another tech trick up its sleeve to make life with an SUV easier. Rear wheel steering will turn the back wheels in the opposite direction to the front at speeds of up to 19mph. The result is a turning circle that’s just 20cm wider than that of a Volkswagen Golf and urban choreography that is easier to live with. Good all-around visibility makes parking more pleasant, as does a 360 degree reversing camera. Park Pilot can also slot the Touareg into a space that you might otherwise deem too small, handy for busy high streets, although the system did struggle getting the car out of a bay space that it had driven into without issue moments earlier.

If you want to push on in the Touareg you’ll want to select Sport Mode and take manual control of the gears via wheel mounted paddles. The transmission is responsive, quickly dispensing your selected ratio. When driving with a bit of vigour you can feel the Active Ride Control at work impressively reducing body roll and maintaining a sense of composure. There isn’t much interaction through the controls, but the all-wheel drive traction and ample grip makes for a confident drive.

This car’s competency continues if you leave the road thanks to its clever all-wheel drive system and suspension that can raise 70mm giving it good ground clearance. It’s obviously no Land Rover Defender, and most will spend their lives climbing speed bumps instead of mountain passes, but it’s nice to know the car is capable should you need its services one day. There’s also a dedicated snow mode which will be music to the ears of those who got caught up in the UK’s latest bout of the white stuff.

We don’t see why not. The Volkswagen Touareg might not be the most characterful of four-wheeled companions, but it executes its brief of being a comfy family car very well. It’s plenty spacious for all of the family and there’s enough technology, though much of it likely optional on our test car, to show up key competitors. If you’re thinking of ditching diesel there’s also a hybrid model on the way.

Its biggest problem is the sibling rivalry between this VW and the Audi Q7. The Touareg does come with a more powerful 3.0 TDI engine as standard, but with prices expecting to start at around £49k, many will be drawn to the Audi’s badge kudos and more practical seven seat configuration.

However, if you’re after something premium that doesn’t tend to cause other road users to make rude gestures at you, the all-new Touareg is a commendable choice. In fact, as it carries over so much of the clever tech from other more pricey Volkswagen Group cars that use this platform, you might even call it a bit of a bargain.