The last Ford Fiesta ST was king of the small hot hatch hill, so can the all-new car stay on top?

It’s a two-fold concern, the new Fiesta ST. Firstly, because its predecessor was outrageously brilliant. It was proof, no less, that modern, turbocharged hot hatches could be affordable, easy to live with and wickedly brilliant to drive regardless of how mundane the conditions might be. It was on the sort of level that only older, naturally-aspirated hatches (think Renaultsport Clio) had achieved in recent decades.

Secondly, because this poor journo was (and still is, in fact) so convinced by the simple, infectious fun of the previous-gen Fiesta ST, that she declared it a modern Peugeot 205 GTi. And, frankly, where do you go from there if this all-new, three-cylinder, 198bhp, £19k Fiesta ST manages to better it? Well, dear reader, we’re about to find out… 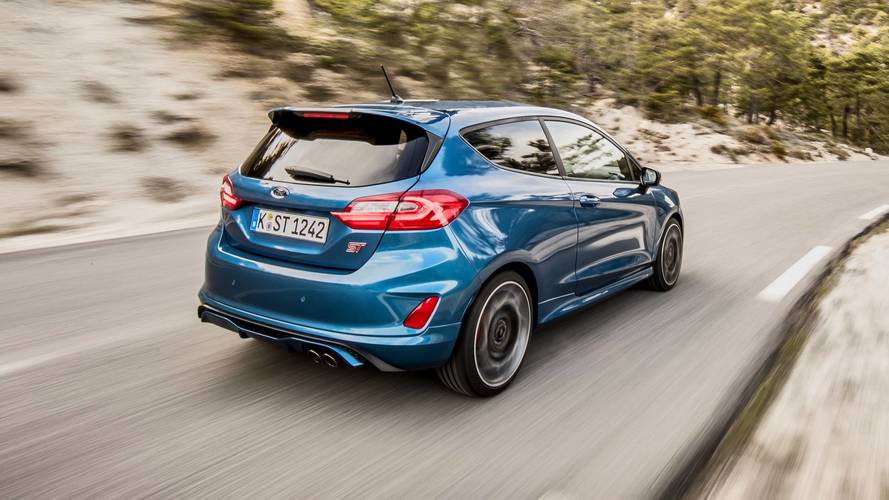 Let’s start with the engine. The 1.5-litre, turbocharged three-pot manages 198bhp and an impressive 214lb ft all the way from 1600-4000rpm, which’ll see the Fiesta ST to 62mph in a scrappy 6.5sec. More than that, this engine will shut off one of the three cylinders when it deems it unnecessary to make it usefully efficient.

Other highlights include an £850 Performance Pack that adds a Quaife mechanical differential, launch control and even performance shift lights so that you can punch through the six-speed manual’s ratios at just the right moment. 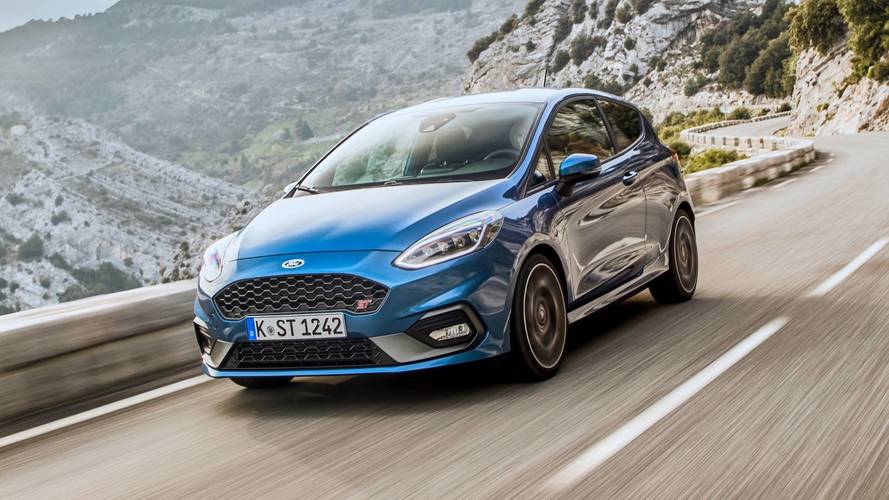 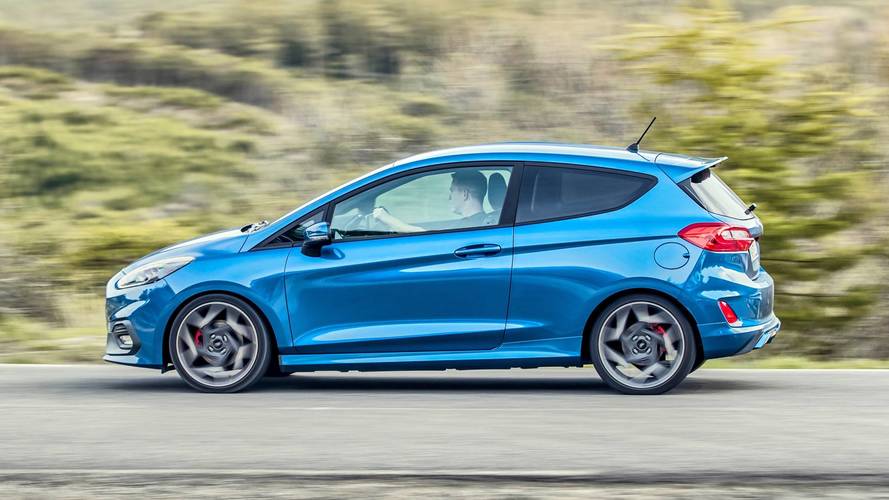 On top of that, there are Normal, Sport and Track modes which tweak steering weight, throttle response and the exhaust synthesiser, all of which is impressively on-trend and high-tech, but has us fidgeting a bit about whether the straightforward hooliganism of the old ST has been lost and some flab gained – this car is around 100kg heavier than its predecessor at 1262kg, but we’re still keeping an open mind.

The Fiesta ST is offered in three- and five-door bodies, and three trim lines – ST, ST-2 and ST-3, which you can read more about here. Suffice to say that most buyers will go for ST-2 which gets climate control, a larger 8-inch touchscreen and uprated B&O sound system over ST-1. 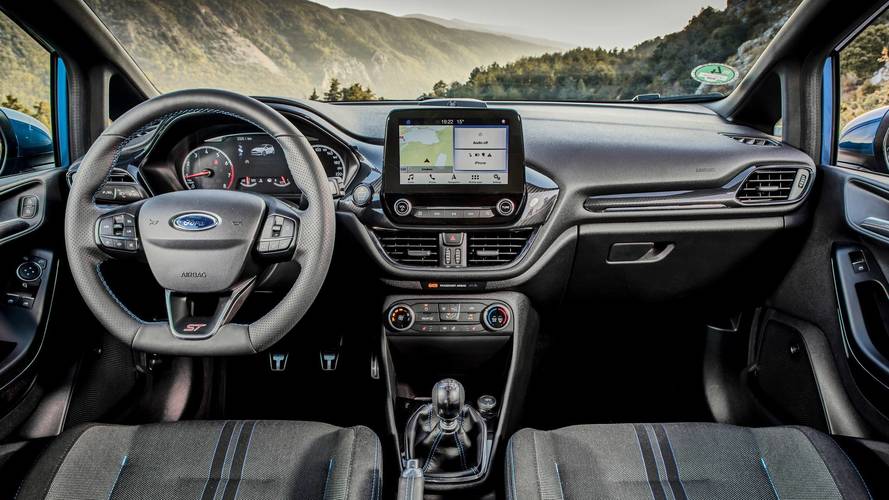 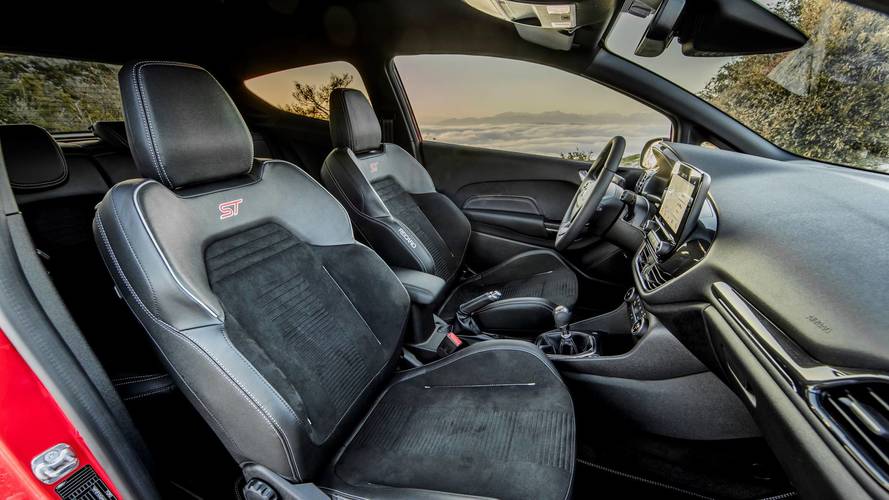 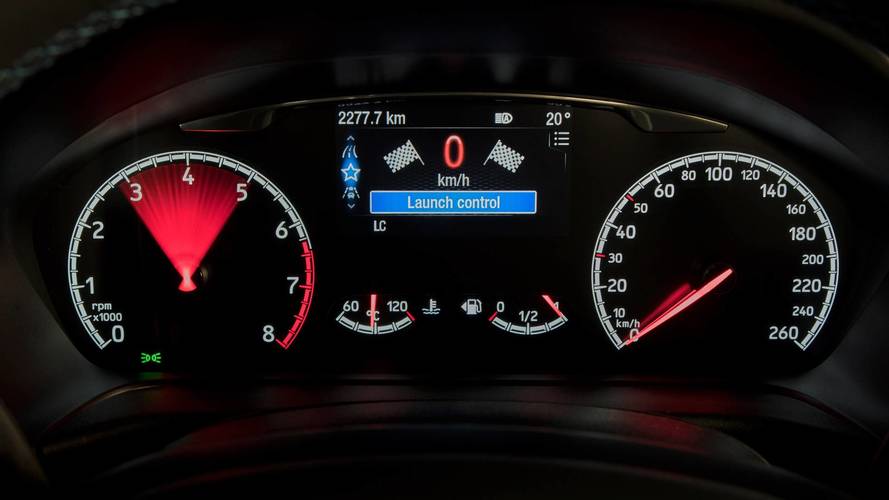 It looks great, too. That rear spoiler and diffuser sharpen up a back end that can look a bit dumpy on the standard models, and the overall appearance is appropriately blistered and aggressive-looking without erring too close to a baseball-cap and tracksuit. Go for the ST-specific Performance Blue paint (check out our gallery for pics of the car in Performance Blue, Race Red and Magnetic Grey) and it really pops, and of course the interior gets those brilliantly supportive, super-chunky Recaro seats, the flat-bottomed steering wheel, and – from ST-2 and up, blue seatbelts and all.

It’s grown up a bit, the Fiesta ST. Everything about it, from an interior that looks and feels smart (and has an actually usable media interface), to the subdued thrum of the engine at low revs, to a ride comfort that feels outright cushy by comparison to its predecessor... Drive it out of the car park and you’ll think, “yeah, this is a hot hatch that’s good for easy living with a bit of hooliganism on the side.”

But you’d be wrong. It’s much more than that. This is a hot hatch that’ll do calm and comfortable to rampant brilliance without even needing to bother the mode switch, simply because it’s just got such sweet, direct control weights, fearsome grip levels, and suspension spun out of dark matter. 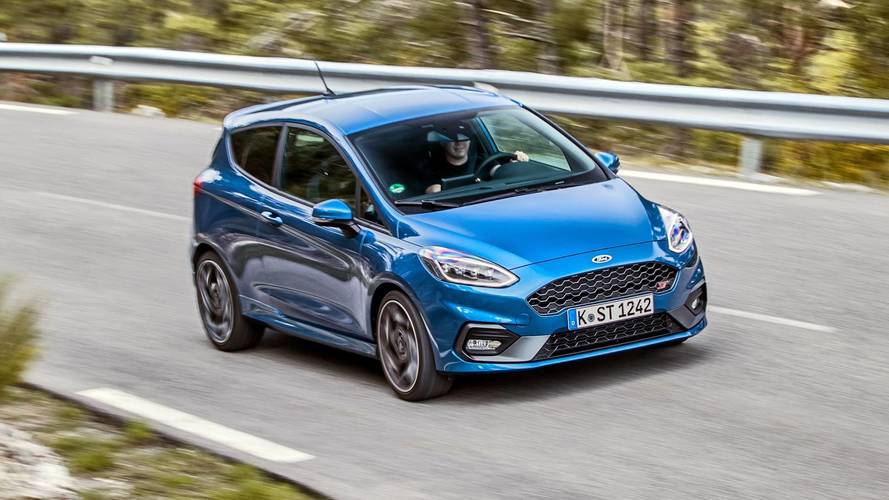 Well, maybe not the latter but it does have clever springs that are banana-shaped to improve tyre contact and body control under heavy forces, and posh Tenneco dampers. Our test car also had the Performance Pack fitted. To be honest, in the end the suspension might as well be made out of dark matter because we have no idea how Ford manages to do ‘everyday’ affordable cars that bend the rules so heavily on how much fun and comfort one car can contain.

Stick the Fiesta ST gamely through a series of hard direction changes and it seems to suck you from apex to precise apex, helping you along yet not feeling as if it’s doing the hard work for you - as some polished hot hatches (I’m talking to you, VW) can do. You can revel in it but it’s always friendly. The steering is always slick and progressive, the front end exactly where you expect it to be… 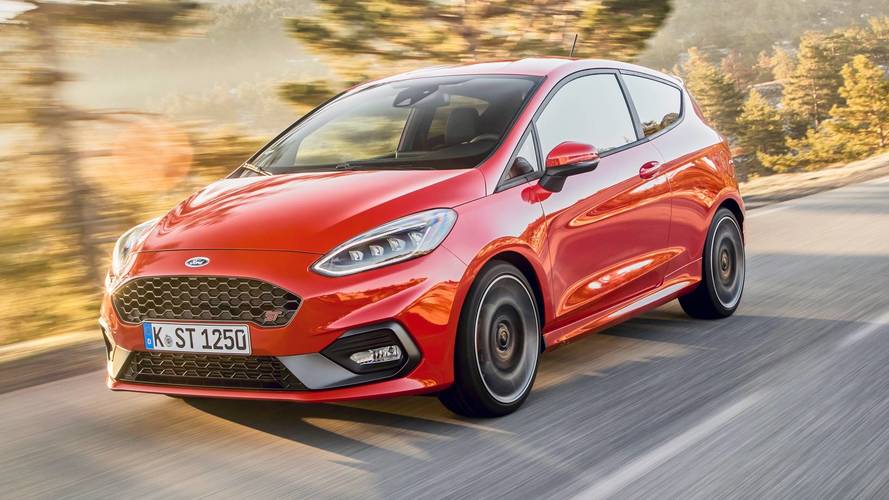 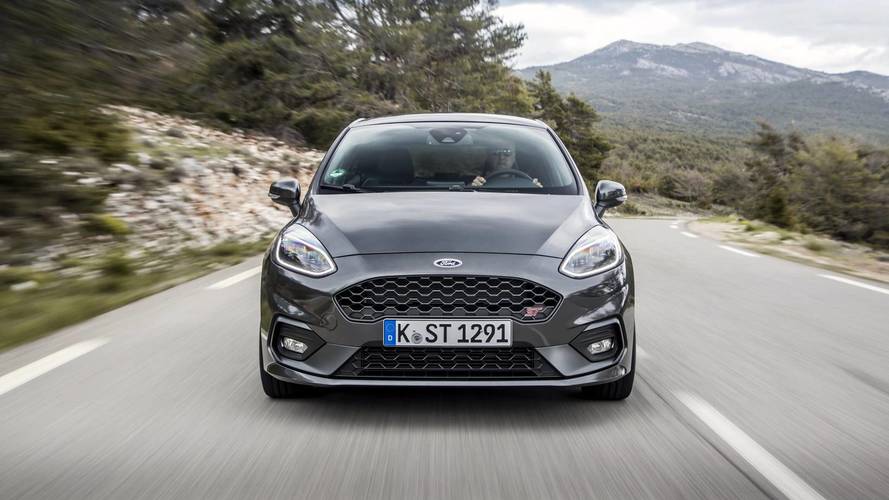 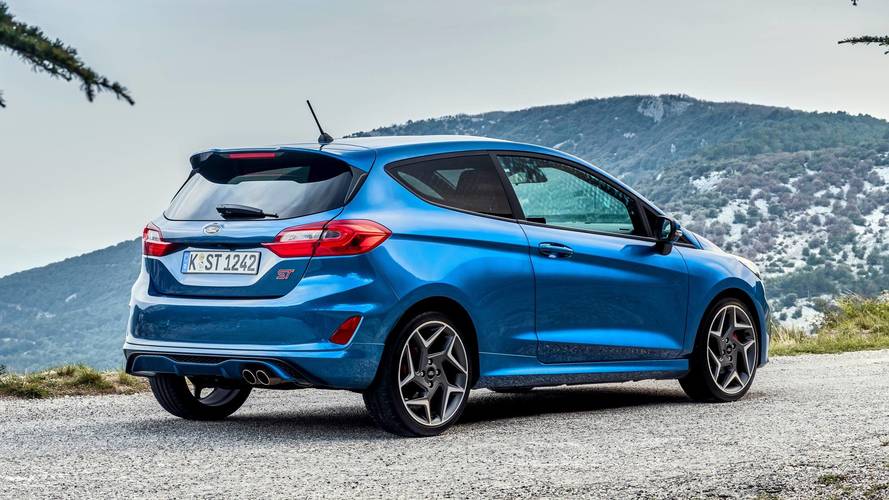 We did also have a go in an ST without the diff and we can say that it’s worth the £850. The ST still romps through switchbacks and fast corners like nothing else in this class, even with the diff, and the steering is actually a touch less corrupted by the road's surface, but that Quaife setup adds an edge of aggression, lets you get on the power a fraction earlier, and just makes the whole shine more. So if you want the best possible handling, add the Performance Pack.

And that engine? Fear not, it’s brilliant. Burbly, wilful and smooth-revving, with a slick gearchange to work it with and enough aggression to make the Fiesta feel seriously intense, and seriously fast. Did you notice the top speed of 144mph? In a Fiesta? Blimey. Perhaps the throttle response in Sport is just a fraction sharp as you squeeze it on, and we’d like a slightly less vague clutch action, but this is still a car that lends itself effortlessly to being driven smoothly and quickly, whether you’re doing the school run or the Stelvio Pass.

We couldn’t detect the cylinder deactivation doing its thing at all, so you needn’t really worry about it. It should just help to improve your economy - 40ish mpg should be realistic - and that’s really the end of it. 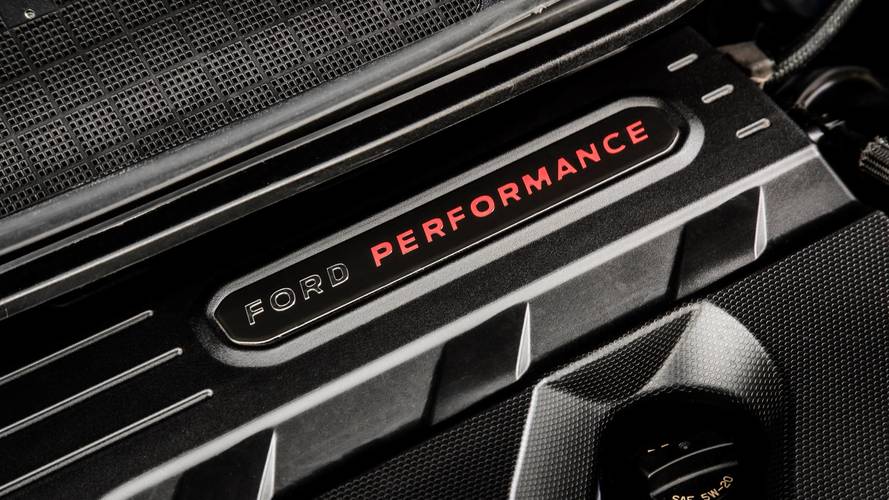 What has been lost is the mini-WRC car soundtrack of the old ST. Sure, this three-cylinder engine sounds great – there’s a synthesiser to help it along (which perks up in the racier modes), piping a surprisingly deep, thrapping note into the cabin, and the pops and bangs on the overrun are very cool. But ultimately it sounds a bit forced where the old one didn’t.

Still, plenty of people will accept that minor sacrifice in the name of the improved refinement and comfort of the new ST. The old one was hard work on a long run and this one just isn’t. There’s quite a bit of tyre noise, but engine noise dies down on a steady throttle, and ride comfort – while you do still feel how tightly sprung the car is on compression or over a sharp bump – is supple enough that you can forget you’re in a fairly serious hot hatch. 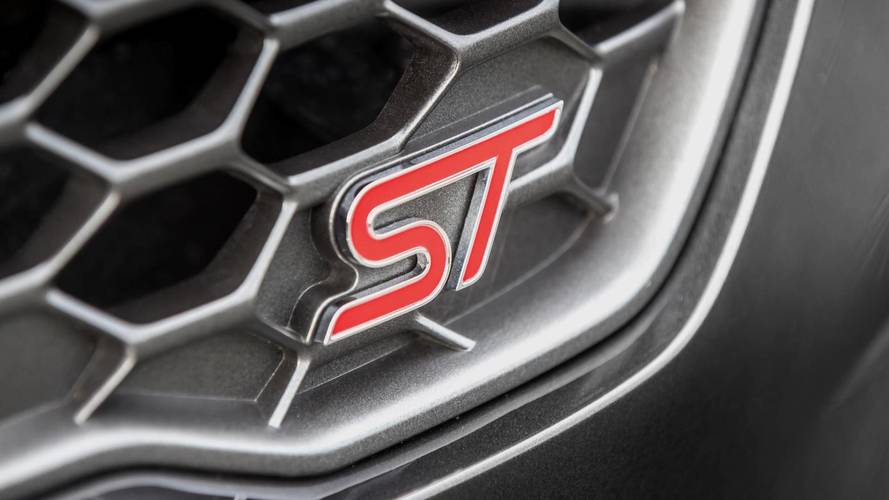 Therein lies the true brilliance of the new ST. Has it lost a bit of the instant playfulness of its predecessor? Yes, it has. We’d even hedge that you have to be going a bit quicker in the new Fiesta ST to feel like you’re getting the most from it.

Yet this new ST is just as vividly brilliant when you drive it hard, and it’s drastically better to live with. Who can argue with that?

Immediately, yes. This is a hot hatch that does it all. We haven’t seen monthly costs yet – those arrive later in May and will, of course, be critical to the decision – but for sheer spread of abilities, from daily runner to bombastic, hilariously engaging enthusiast’s car, it certainly seems like great value. Few things will be faster or more fun than this on Britain’s scrubby country roads. It’s just a delight through-and-through.

We’ll have to get the VW Polo GTI and Suzuki Swift Sport on the same stretch of road to say for sure, but we’d already bet the house that there’s no better hot hatch out there at this end of the scale.