Ever wondered what it'd be like to drive a Le Mans prototype car? Well McLaren has just built one and it comes with a number plate.

There’s a funny thing about cars that put aerodynamics before everything; you often don’t find out what they’re really capable of until you go a bit faster than you really meant to. Brake a bit later than you think is strictly wise. Turn in a fraction faster than you meant to. And then you find out what downforce is about. The hand of god is suddenly pushing the car into the ground and giving this manmade thing of metal and plastics the ability to shrug off the laws of physics. 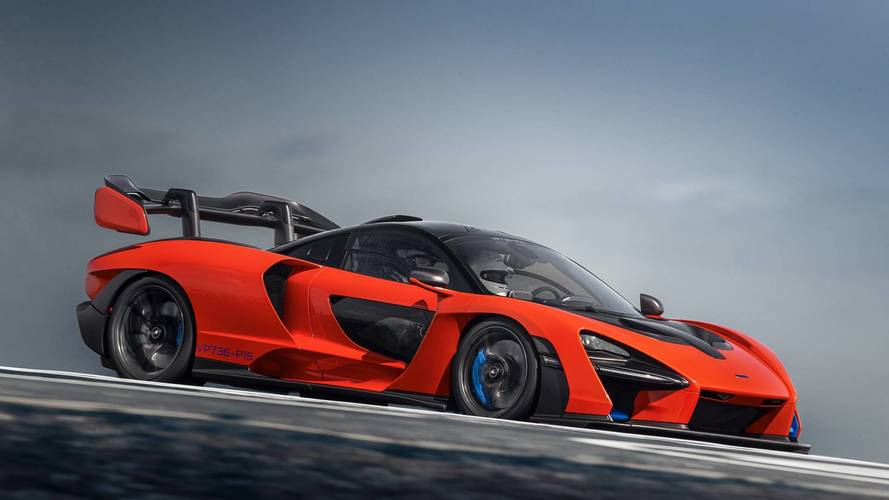 Right, let’s address the way the McLaren Senna looks. This, don’t forget, is actually road legal (although it's 99.9% a track car), and you will certainly notice it if you see it. That rear wing is divisive, certainly. It’s huge, it means business, it waggles about automatically - with an impressive breadth of adjustment - to automatically to give you the best possible downforce for the situation. Even the front aero blades constantly adjust, keeping the air pressure on the nose as well as the rear of the car. 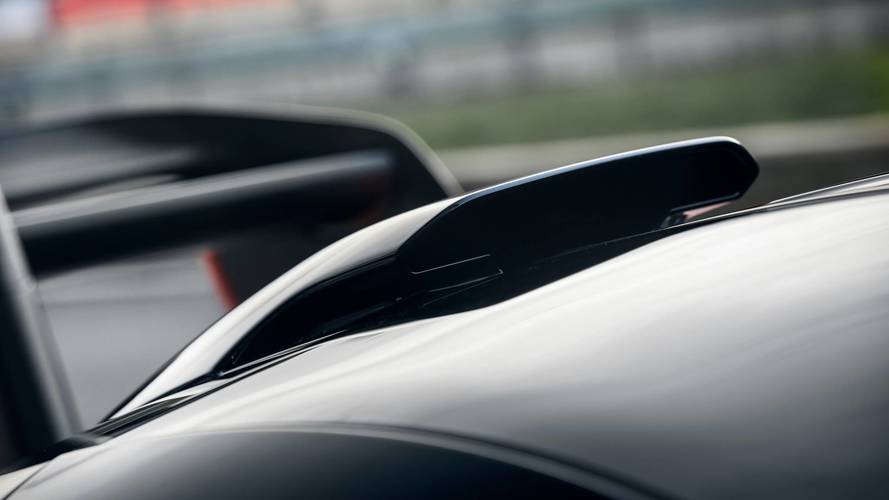 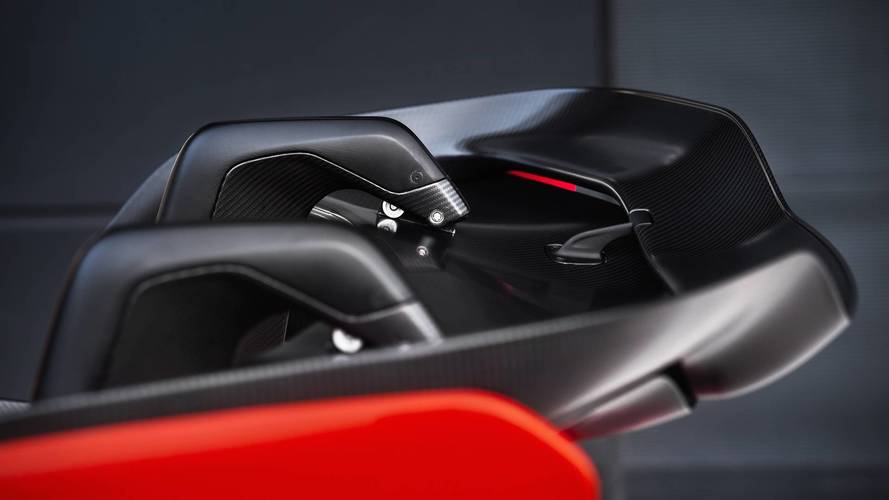 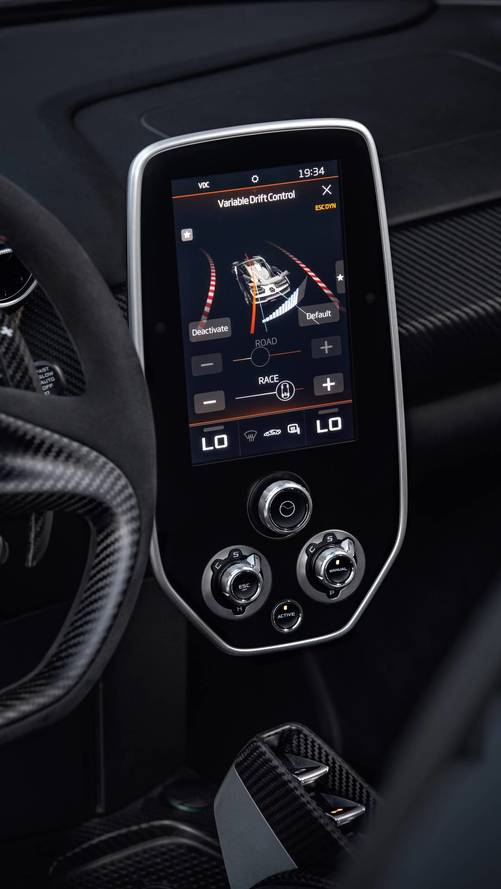 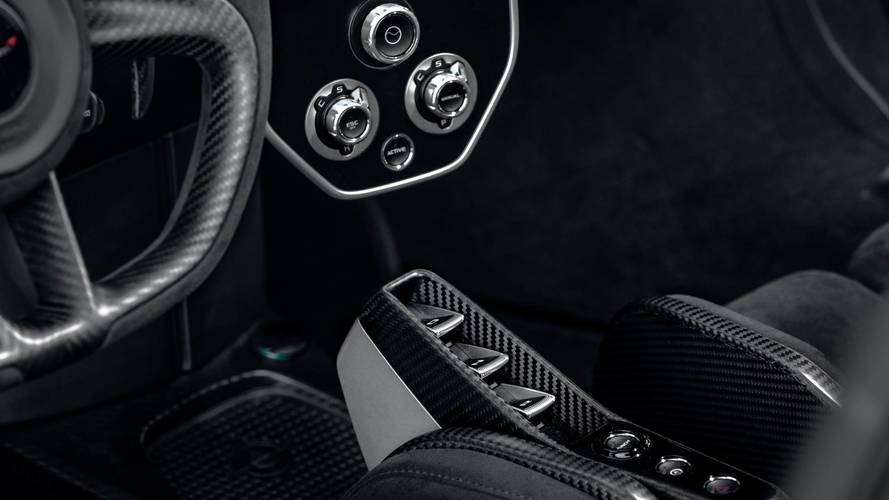 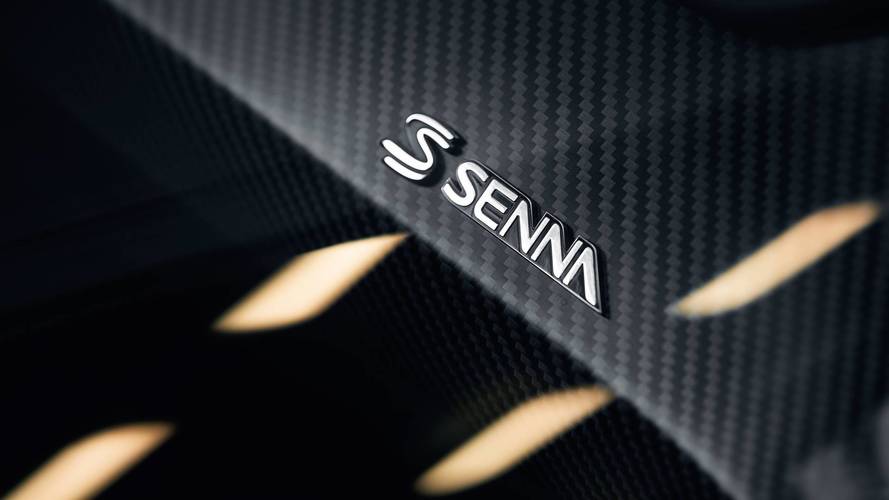 The whole car is designed to be effective, rather than to be pretty, and the result – the teardrop cabin, the harsh lines, the caricature wing – actually combine to make the Senna appealingly brutal. Almost Transformer-like, such is its blunt appearance.

You can also have it specced in almost any way you’d like. McLaren has a sort of next-gen configurator available in its dealerships which uses HD gaming tech to help you pick from the virtually endless colour options (obviously you can have bespoke paintwork if you want), the stripes you want, if you want a glass rear bulkhead or a solid one, glass panels in the horizontal top panels of the doors that scissor out and forward like an angry elephant’s ears when they open...There’s actually a remarkable breadth of optional equipment on the Senna. Having said that, there is only one style of wheel – the super-light alloy with a central boss for easy wheel changes, although you can personalise the colour of the wheels that hub. 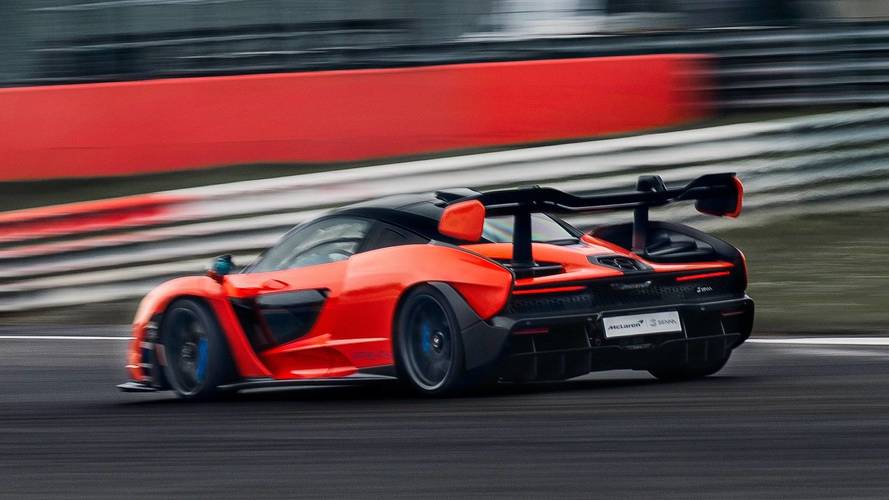 And underneath all the aerodynamically-precise bodywork, mounted in the middle of the carbonfibre monocage (the strongest ever produced by McLaren), lies a mid-mounted 789bhp, 590lb ft, twin-turbocharged 4.0-litre V8, sending power to the rear wheels alone. You’ll find none of the P1’s clever hybrid tech, here.

In fact, McLaren is keen to emphasise that the Senna is not a successor to the P1, but an entirely different thing. A new Ultimate Series halo car. The fastest road-going track car that McLaren has produced – and the lightest barring the F1. It’s about creating the ultimate road-legal race car, and something worthy of the legendary Senna name.

So let’s find out if it is…

Looking at the Senna, and imagining what it’d be like to drive, it’s easy to think it might be overwhelming. Sensory overload. A full symphony orchestra playing different pieces at the same time. Too many brilliant things happening all at once. 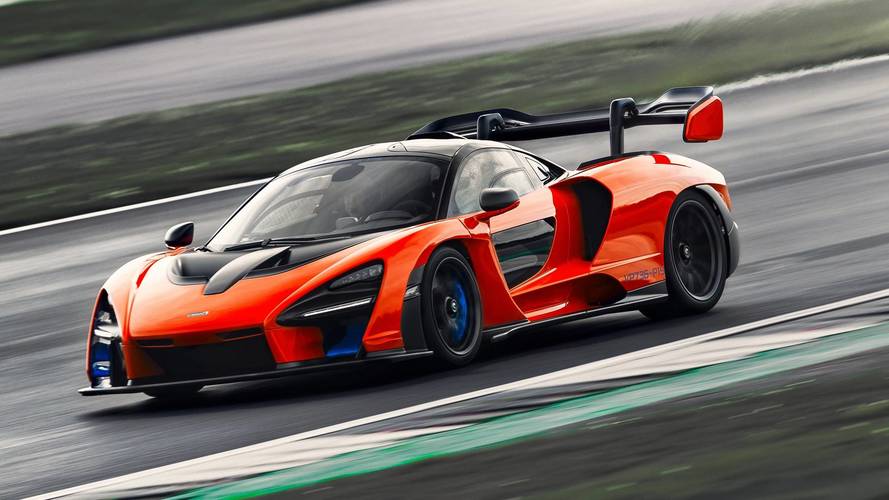 That’s not the case here. In the Senna, everything gels immediately. Even trundling out of the pits onto Silverstone’s International circuit it’s obvious how perfectly judged the throttle response and hydraulic steering is. How dialled-in and full of feel, without being neurotic. How totally intuitive everything is from the get go.

Of course, the Senna has modes – Comfort, Sport, Track and Race - that adjust the aerodynamic bits, the hydraulic race-tech suspension, and the dual-clutch auto’ gearbox. Track mode - which still has the powertrain in maximum attack mode - was our favoured setting.

Flick the paddle, which is just where your fingertips need it to be, squeeze the throttle on as you sweep out onto the straight and welcome to the full force of the Senna. It is biblically fast. It’s not the leap to 62mph that takes your breath away, it’s the way it carries on accelerating. And carries on, and carries on, and carries on without ever seeming to succumb to the normal forces of horsepower verses air pressure.

All of this while the snorkel on the roof mimics Darth Vader howling at the moon, the turbos (there just isn’t any lag – we looked everywhere and couldn’t find any at all) breathe fire and damnation into the V8, and every snap of the paddle releases a cataclysmic boom from the exhaust.

It’s so fast that you actually lose much concept of what speed you’re doing until you glance at the speedo and discover that you’ve just passed 160mph.

Maybe brake, then? Yup. Definitely some stopping needed for the fast third gear right-hander at the end of the straight. The carbon-ceramic brakes are as astonishing as the rest of it. Apparently they take seven times longer to make than ‘normal’ carbon-ceramic brakes. Hit the stoppers at 124mph and the Senna will have stopped after 100 metres - or about eight double-decker bus lengths. The car will have stopped moving long before your guts have re-organised themselves, that's for sure. 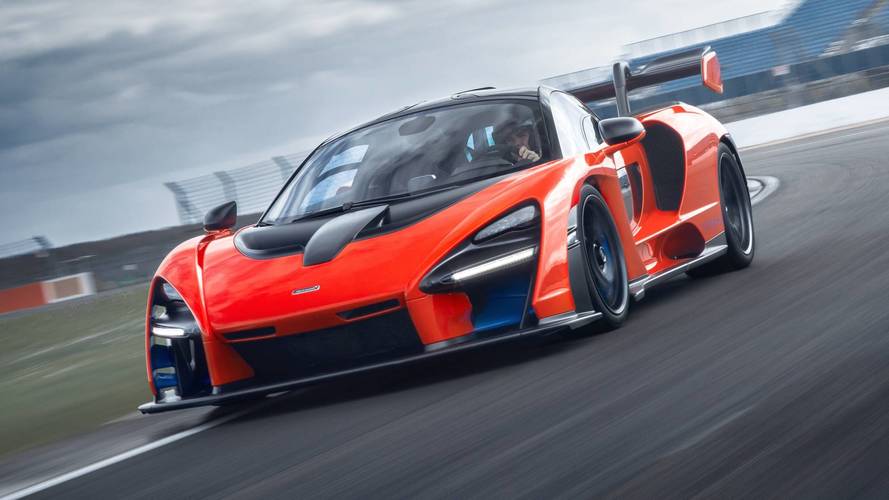 So after you’ve misjudged how fast you’re going, you find out how good the brakes are and find that you’ve gone from going faster than you thought to going slower than you thought. Gather your wits and turn in.

Good grief. This thing is cuttingly precise. The Senna has hydraulic suspension that is linked side-to-side and front-to-back, plus it has a super-posh hydraulic anti-roll system. It’s all extraordinarily complicated, and works in harmony with the active aerodynamics to give the car the best possible grip and communication even when the car isn’t being driven flat out. It shows, too.

Even when you’re adjusting to the Senna’s kaleidoscope of extreme ability, it feels rooted to the road and neutral. Push harder, brake a bit later, lean on it a bit more and it becomes more vivid. The way it pivots around you so effortlessly, every bit of information running directly from steering rack to human nervous system. It’s dumbfounding how easy it is to drive this thing quickly. It helps you along. Sucks you into the next corner, doles out its power one horse at a time to your precise demands, hands you traction where you were braced for it to run out, gives you feedback that you didn’t think a car could offer.

It’s extraordinary. From the brutal looks to the mesmerising driver interface to the depth of technical detail that makes it all work. And it’s spectacular partly because it’s quite different in nature to a McLaren P1, LaFerrari etc. It’s not a hypercar for the road, as those are. It’s not even merely a track car. It’s an aero car. 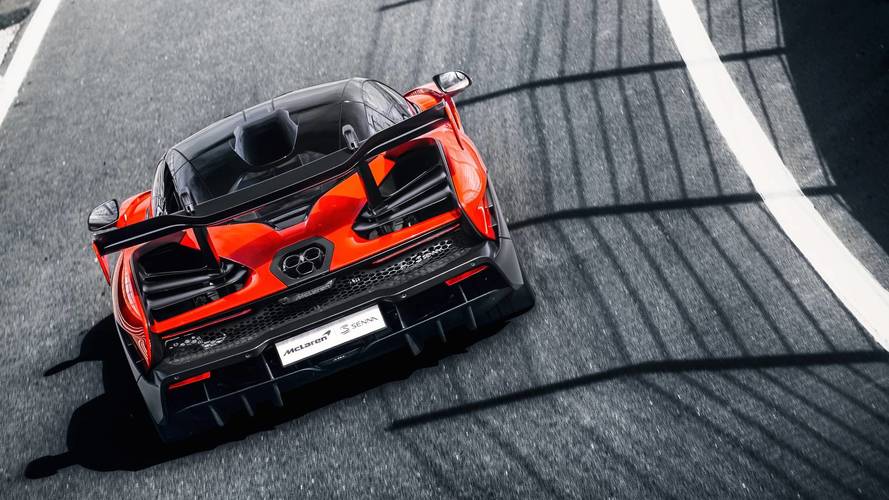 Have you ever watched an LMP1 car change direction through the Porsche curves at Le Mans and wondered what that must feel like from the driver’s seat? The McLaren Senna will be as close as you can get to that experience without actually stepping into an endurance racer.

It’s basically a more forgiving Le Mans LMP1 car (which is interesting since McLaren is rumoured to be considering an LMP1 entry) with a number plate. And what could possibly be cooler than that?

And on the subject of racing prototypes, our drive is - as the title suggests – of a prototype car. Thankfully, McLaren says that it’s as the engineers want it be – it’s just waiting for sign off. Well, whoever’s doing the signing should do it, and do it fast. Like, yesterday. 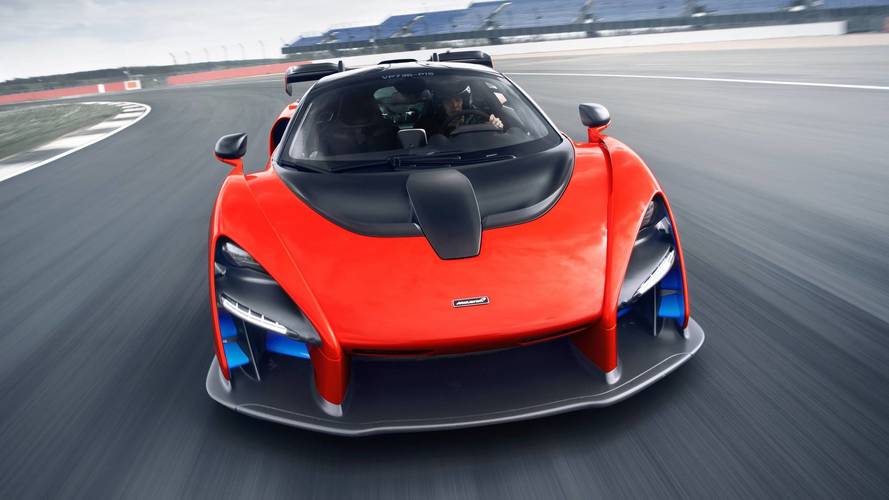 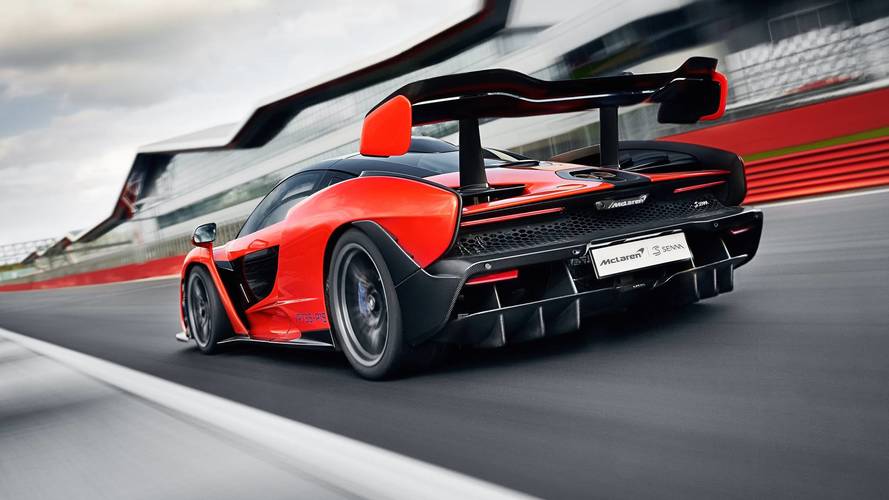 You can’t. Not from source, anyway. All 500 are sold, of course. But if you happen to find yourself with £750,000 in your pocket (more like £1m if you’ve not already got your car on order) and a yearning for something like a road-going Le Mans car, then yes. The Senna is astonishing for being both approachable and somewhat forgiving yet also as close to a full-bore endurance racer as it gets if you want to drive it on the road. And who doesn’t want that for a weekend play thing?