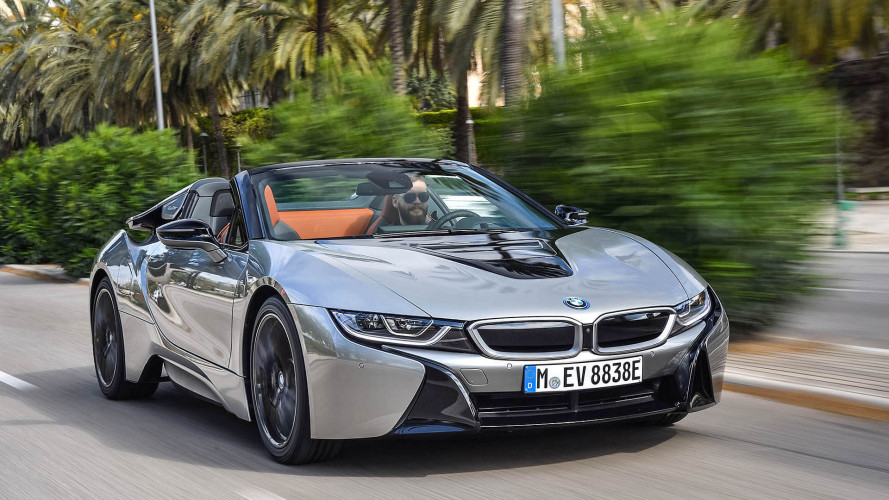 The i8 gets more power and more range, and loses its roof.

A facelift for the BMW i8 at first seems about as necessary as a 15-year-old getting Botox. The Bavarian UFO may have been on the market for four years, but it still looks like it just landed on our planet from a very distant, very sophisticated galaxy. Battery technology, however, is developing rapidly, and that means slightly more power and noticeably more electric range. The big news, however, is this: BMW has cut the roof off the hybrid sports car. The result is the new i8 Roadster, which adds an extra dose of science fiction to the i8 package.

Is it the better, more contemporary alternative to the likes of the Audi R8 Spyder, Porsche 911 Cabriolet, and other topless supercars? Wait, not so fast. We don't want to make the same mistake twice. When the i8 coupe hit the market, its handling wasn’t dynamic enough for many. But then again, maybe it shouldn’t be: BMW has positioned this car in a completely different way. Not as an uncompromising racetrack weapon, but as a sporting statement for enthusiastic (and rich) eco-thinkers. Of course, with a BMW i8 you could always be very dedicated and have a lot of fun, but if you thought of it as a genuine supercar, an unconditional cornering monster, you would be disappointed – even though the i8 certainly looks like one.

The basic design has not changed with the i8 facelift – and of course this also applies to the new i8 Roadster. However, the engineers have taken quite a few criticisms to heart. The steering weight has been revised, there are new 20-inch wheels which are now one kilo lighter per piece than before, and the front bumper has been slightly modified so that it can better handle the air flow.

Visually, nothing else was needed; the i8 still looks like a 2025 model. And people love it: If it goes purely by the number of views and thumbs raised during my test day in Germany, the quiet hybrid athlete can easily keep up, kerb-appeal wise, with the classic posterboys of Ferrari, Lamborghini, or McLaren.

As to the new i8 Roadster specifically, its fabric roof looks a bit like thicker denim and skilfully disappears behind the front seats within 15 seconds at speeds of up to 31mph. In addition, the aluminium components of the roof mechanism are 3D-printed and look like artwork. Nerd factor: 5,000 strengtheners were mainly added around the windshield frame – which, like the majority of the body, is made from carbonfibre reinforced plastic (CFRP). Overall, the Roadster is 60kg heavier than the coupe, at 1593kg. Of course (and unfortunately), the soft-top conversion eliminates the back seats of the regular i8 coupe. However, BMW has found at least 99 litres of storage space behind the seats in their place, which helps a lot given the somewhat miserable 88 litres of space in the boot.

The performance increase in the facelifted i8 is not exactly revolutionary. It comes entirely from the increased performance of the new lithium-ion batteries, which are much more powerful than before. The capacity increases from 20 to 34 amp-hours, the energy from 7.1 to 11.4 kWh; an improvement of 70 percent. Because more energy is there, the i8’s electric motor can work harder than before than before and so its performance increases by 12 to 141bhp. The wonderfully charismatic turbocharged 1.5-litre three-cylinder engine still delivers a whopping 228bhp and 236lb ft of torque, but now has an emissions particulate filter.

The i8 Roadster accelerates to 62 mph in 4.6 seconds (the Coupe needs just 4.4 seconds), and to answer the question asked at the beginning: Yes, you notice the extra power. It’s very noticeable, just not in the traditional sense.

You just have to love the unusual combo of the electric motor up front and the three-cylinder engine in the back. With the massive punch from a stop and the unusually powerful mid-range from 2,500 to 4,000 rpm, it really burns like tinder. How frenetically the i8 hangs on to the power at all times, how rough and rebellious the engine sounds (despite obvious sound amplification, the way the i8 sounds is still a great joy).

Sure, BMW's plug-in hybrid roadster is not nearly as quick as other exotics in its price range, but it’s more than fast enough and delivers its performance in a properly engaging way. In addition, it can inspire with so many other skills: Coasting along completely silently in a convertible sports car and then, at the touch of a button, frightening unsuspecting cyclists when overtaking with full power. The nice thing is that you can do all that for much longer than before.

BMW promises 33 miles of electric range from the i8 Roadster, although in all-electric driving I seemed to get closer to around 18 miles. Even in the hybrid modes, "Comfort" and "Sport," it’s more efficient. After around 93 miles of driving, some highway, lots of mountain roads, I saw average consumption figures equivalent to 28-36mpg miles per gallon.

And crucially, it's still fun. Once you've adapted your driving style to this very special genre of mid-engined hybrid roadster, the i8 delivers plenty of driving pleasure. Just don’t expect scalpel-like, laser-fast handling like you get in the McLaren 570S or the R8 Spyder.

The BMW may look like the most extreme supercar, but its soul is green. Even after the facelift, the front tyres are still a limiting factor. In the fight for every gram of CO2 and every metre of range, BMW put skinny 195-section-width tyres up front. And even with the optional 215-width rubbers, traction at corner entry vanishes just a bit too early, leading to quite pronounced understeer. This is not terribly tragic, but a pity because in itself the i8 is a highly talented machine. It has excellent balance, terrific steering, striking looks, and it’s full of energy. And powering out of corners, it takes full advantage of its hybrid all-wheel-drive grip.

Yet the average BMW i8 driver probably doesn’t care all that much about it. It’s more about enjoying the ingenious technology; taking wide, fast corners; using the unrestrained power and hearing the rumble of the three-cylinder in the back; ogling the futuristic flanks in the side-view mirrors. And without a roof, the i8 Roadster seems even quieter when motoring engine-off - you're even more keenly aware of the lack of engine noise, and you enjoy it even more.

The i8 Roadster may not be as extreme a performer as its traditional competitors, but it can do so much that others can not. It’s a completely new kind of sports car: technically fascinating, very contemporary, and all without a guilty conscience. And so for this very modern kind of driving, the airier, more flamboyant Roadster actually seems more appropriate than the coupe.

Weaknesses? The A-pillars are still far too thick, which hurts visibility around corners. In addition, the otherwise perfectly positioned seats could give quite a bit more lumbar support. You also won’t find the usual semi-autonomous driving aids (besides a backup camera and parking sensors), which seems rather strange for a technical innovator like this. And, of course, it’s expensive, from £124,730.

Ultimately, the 2018 BMW i8 Roadster looks absolutely stunning in its very own science-fiction style. Thanks to the retuned steering, it now drives a little more emotionally and lustfully, and the new batteries mean you can enjoy that for longer on electricity alone. Otherwise, it drives like an i8 always drove – and that's a good thing. Even though it doesn’t carve corners like a true supercar, it still delivers a lot of fun, albeit in a different, very modern, and very sustainable way.