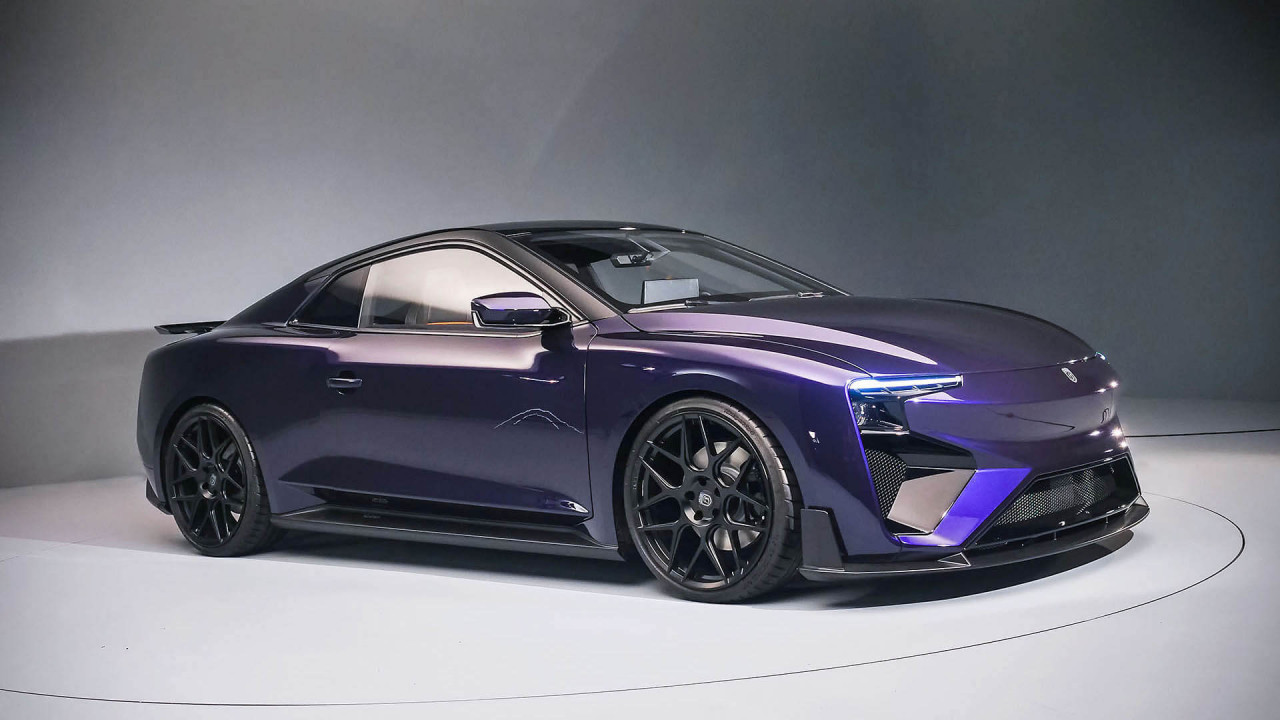 Gumpert’s electric supercar will do 186 mph, and it’s powered by alcohol.

You can literally feel Roland Gumpert's excitement. The 73-year-old has experienced quite a bit in his remarkable career, but this project seems to have really grabbed him. The ex-Audi Motorsport Director, super sports-car manufacturer, and Nürburgring record holder (with his road-racing car Apollo) has invited us to a small studio in Ingolstadt, Germany, where he will show a few journalists his latest creation.

To be honest, we had almost no idea what to expect. There was talk of a new electric sports car. With Chinese support. Gumpert Aiways is the name of the new company. Further information? None. It makes it exciting. We are three weeks away from the ceremonial revelation at the Beijing Motor Show and Gumpert apparently wants to go in with a big bang. Take it from us: he should succeed.

You have probably already seen "Nathalie" in the accompanying photo gallery. Nathalie (yes, that’s really the car’s name) is wrapped in a rather elaborate purple paint, measures just over 4.2m long, and looks like a muscle car from the year 2030. If you look closer, you’ll recognise a lot of cues from the ultra-sexy Audi Sport Quattro concept of several years ago.

Roland Gumpert spent 35 years with Audi; he will never completely forsake the four rings. In 1998, he moved to China as a board member for sales and marketing, where he set up the Audi dealer network with a local partner. The partner, a certain Mr. Fu, became a friend of Gumpert’s, and saw his eldest daughter grow up (bet you can’t guess what her name is). Now Gumpert and Fu have founded a new company for the construction of electric sports cars: a Shanghai-based outfit called Aiways. Though calling it a startup may be a bit understated, if you have a starting capital of 1.5 billion Euros. Gumpert acts for Aiways as product director. From 2019, there will be continental electric cars: Small cars, SUVs, buses, limousines. There’s a platform for eight different vehicle variants. The future production facility is designed to assemble 300,000 cars a year.

However, the flagship of Aiways comes from Germany, and should be produced there starting from 2019. Behind the name RG (for "Roland Gumpert") Nathalie, which needs getting used to, is a truly revolutionary idea – at least for the automotive industry. Why revolutionary? Because this burly electric wedge drives with a methanol fuel cell.

In principle, you pour pure alcohol into the tank. This is heated to 300-400 degrees Celsius (572-752 degrees Fahrenheit). Carbon dioxide is emitted, and what remains is hydrogen, which is passed through the fuel cell to generate electricity. No one has done this so far, but the benefits are obvious: Lengthy recharging processes are completely eliminated.

Of course, they would also be eliminated with a "normal" hydrogen fuel-cell car, but here Gumpert’s system does not need a complicated and complex-to-design tank infrastructure. Any gas station could, in principle, set up a methanol dispenser overnight. The refuelling process is no different from filling a conventional car. On top of that, methanol costs only about a third the price of petrol.

The unconventional fuelling system will give the RG Nathalie impressive driving ranges.

"A classic electric car in the sense that I understand a car does not work," says Roland Gumpert. "I drive 200, 300 kilometers [124-184 miles] and then I stop because the battery is dead. This contradicts my idea of freedom. Here I always have my generator on board, we reach proven ranges of at least 600 kilometers [372 miles]. If I drive economically, up to 1,200 kilometers [746 miles].” Why has none of the major manufacturers come up with this simple and ingenious idea? "Because they did not think enough," says Gumpert.

The RG Nathalie is based on a tubular frame and has a body made of carbonfibre. The fuel cell sits in front, the batteries are T-shaped and distributed in the vehicle floor. The interior looks sporty and modern: pure and minimalist with a bunch of displays and novel-looking materials. The two-seater has a reasonably usable boot, weighs just under 1600kg, and has a weight distribution of 45:55 front-rear.

Drive is provided by four wheel-hub electric motors - one motor located at each wheel - with around 75 to 80 kilowatts of power each. The total system performance will be around 420- to 430bhp. Compared to other electric supercars like the circa 1,900bhp Rimac Concept 2 or the 1,350bhp Nio EP9, that sounds almost a bit weak. However, Nathalie should also cost only a fraction of what these vehicles cost, if still a heady £260 - £450,000.

And as for performance? Gumpert is more than confident: "This is clearly a super sports car. We have over 737lb ft of torque. The acceleration, the low centre of gravity, that's just awesome,” he laughs.

Specifically, the RG Nathalie should accelerate to 62mph in under 2.5 seconds. The top speed will be 186mph. Four driven wheels are of course a must for four-wheel-drive pioneer, Gumpert. However, Nathalie does not need classic differentials anymore. Everything here is about torque vectoring. The car also has no gearbox in the true sense. The electric motors rotate at a maximum of 15,000 rpm and have a fixed gear ratio. The suspension consists of McPherson struts up front and a double-wishbone rear axle.

"From the sporting values, this car is the ultimate. We will also go back to the Nordschleife. I think we can keep up very well there,” Gumpert says. And he must know: He held the Nordschleife record for production vehicles for years with his Apollo. The 7-minute, 11-second time, which he set in 2009, should thus easily be cracked by the Nathalie.

Today we’re not going quite that fast. Do you remember the Gumpert Explosion concept shown ahead of the 2014 Geneva Motor Show? The oblique supercar with a 420-hp turbo four-cylinder never made it to the show. But today, we’re able to take a short drive in an RG Nathalie prototype. It only drives two of the four motors, though, for testing purposes.

I take a seat and swoon silently away. Inside, the cockpit has many familiar pieces from the old Audi TT. Garnished with all kinds of measuring harnesses and a gear selector lever that knows only forward, neutral, and reverse. After all, no more choices are needed. "Everything is done until the premiere," says Gumpert.

We roll around the studio grounds and a few side streets, never exceeding 45-50 mph. But even with half the power you can already feel what will be possible with the final car. The unrestrained thrust, the spontaneous, urgent force. It already drives like the future.

Meanwhile, the small display next to the gear lever is constantly spitting out numbers. The fuel cell constantly charges the battery with about four kW – or even more if I floor the gas pedal. We also recuperate quite a lot of energy through braking, too. Although we've spent only a few minutes in a rather rudimentary prototype, and although Gumpert has developed the Nathalie in less than ten months, the project, and especially the idea behind, it seems pretty promising. But of course, doubts remain.

Who pays a fat six figures an unfamiliar car with a new powertrain concept? Which oil companies would start selling methanol to their gas stations, if only a handful of cars on the road fill up with it? And how do the big car manufacturers react to Gumpert’s new idea? Actually, they would have to get on board for the methanol idea to be a resounding success, but Gumpert believes more in the opposite: "Probably they will fight us."

That would be a pity. We hope that this enthusiastic, fundamentally sympathetic man’s stunningly beautiful electric sports car and the methanol fuel-cell idea will be a success. With Chinese investors supporting things behind the scene, the chances could be worse. At the moment, Gumpert's daughter Nathalie is pulling the sheets from her mobile namesake in Beijing at the auto show. In August or September this year, we should be allowed a full test drive of the finished car. Let’s hope it lives up to our expectations.