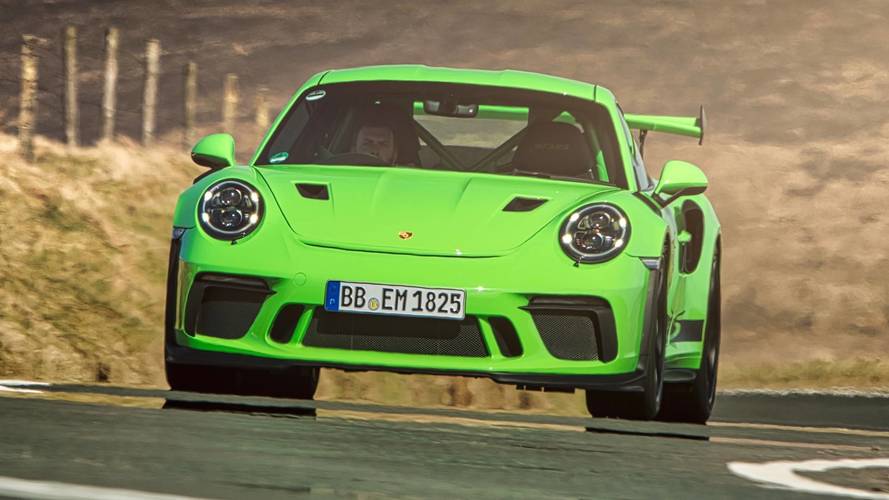 Porsche takes its traditional sharpen, lighten and improve route with its new GT3 RS, but the collective gain is greater than the sum of its parts.

Twenty-four seconds. That’s what the changes to the GT3 RS add up to. Around the Nurburgring, of course, those 24 ticks of the stopwatch’s second hand are incredibly significant. They make the new RS into a sub-seven minute car, recording 6 minutes 56 seconds around Germany’s Green Hell. That’s fast. Ridiculously so. Surprisingly, too, even to Andreas Preuninger, Director GT Product Line at Porsche who reckoned it’d gain 10, maybe 15 seconds over its predecessor, a car that nobody would ever describe as slow.

RSs have always been about a collection of incremental gains, but with this Gen II 991 GT3 RS the resultant whole seems greater than the sum of its parts. The power grows, slightly, a 19bhp gain seeing the peak output increase to 512bhp achieved at 8,250rpm. The engine is essentially that of the GT3, a naturally-aspirated 4.0-litre masterpiece that revs with tearing enthusiasm to a heady 9,000rpm, and breathes here through a differing intake, the exhaust being lighter and freer-flowing.

There’s improved aerodynamics, this RS achieving the same levels of downforce with less drag, largely down to those NACA ducts on its bonnet. They cool the brakes, too, the RS a definition of the performance car efficiencies that add up to greater speed. It’s all been about precision, admits Preuninger, with every element finessed with that in mind, from that aero, through to the engine, gearbox, steering control systems and the chassis.

Unsurprisingly it borrows heavily from its GT2 RS relation here. The suspension, but for minor adjustments to account for the GT3 RS' differing weight and performance aside, is all but identical. To recap, then, that means the GT3 RS rides on hard-mounted (rose-jointed) suspension, on springs with rates double that of its predecessor. Countering that are dampers and roll bars with a softer set-up, the RS effectively riding on 991 Cup race car suspension, tuned for the difficult surfaces of the Nurburgring.

Visually the new RS differs little over its predecessor. Those NACA ducts are the most obvious signifier, as are the graphics on its flanks, it a keen-eyed enthusiast who’ll spot the slightly higher rear wing and differing profile of the air intakes in the front bumper.

Inside it’s more of the same, there are now perforations on the seats, lighter-still carpets and updated infotainment - assuming, of course, you don’t leave it off the specification in a bid to keep the kerbweight to a minimum. It tips the scales at the same 1,430kg as the old RS. Nuances, then, as you’d expect from a mid-generation revision to an RS model.

Such is the proliferation of models from the GT department these days, first reports of the new GT3 RS were a touch muted. With the bombastic 700bhp GT2 RS still at the forefront of everyone’s consciousness, little, it seemed, differed from previous GT3 RS. That, at least, was the initial impression.

The effect of that incredible lap time has reverberated, though, underlining with conviction that the Porsche GT department’s obsession with the details pays out big dividends. Those cumulative gains then, have added up to a hugely significant whole, moving the GT3 RS not just a small step forward, but into a different sphere. Given the mighty performance, engagement and thrills its predecessor delivered, this RS has as much to lose as it has to gain.

And gain it has. Significantly. The RS has taken on a new level of sophistication, in its control, its poise, all while retaining that sensational, rich capacity to thrill, engage and excite.

The engine, familiar to us via the RS’s GT3 understudy feels even more intense. Gloriously, indulgently naturally aspirated in a world of forced-induction rivals (but for the Audi R8), it is seemingly devoid of any internal friction such is its insatiable appetite for revs. It sounds magnificent when it’s chasing that hedonistic 9,000rpm redline, the acceleration that accompanies the exotic, mechanical sound filling the stripped, purposeful cabin, similarly addictive. This is a car that’s as rich in its sensations as it is relentless in its speed.

Orchestrating that 4.0-litre flat-six behind you is the seven-speed dual-clutch, automatic PDK transmission. Again, its controls have been tweaked in line with that precision development goal, the result a shift that’s so immediate it’s as if it’s anticipatory. Whether you’re climbing or descending the ratios, the PDK delivers each cog without hesitation. The PDK allows Porsche to fit its most sophisticated electronic differential to the GT3 RS, it, like every element in this Gen II GT3 RS being finessed in its control, that in turn further enhances its dynamic efficiency. It’s that which accounts for the lack of a manual gearbox, as is the RS way.

If the engine and that PDK transmission work as a precise, unified whole, then they’re partnered to a chassis that’s equally as adept at exploiting the performance they offer. Incredible as the engine is, it’s the chassis that’s the most revelatory element in the new GT3 RS’s arsenal. The suspension should be a mass of compromises, with spring rates doubling, those stiff, direct connections with no bushing perhaps perfect for the predictable surfaces of a race track, but not the challenges of the road.

What’s genuinely remarkable is that by tuning the dampers and dialling back the roll-bar stiffness the GT3 RS rides with real composure. The expectation of harshness never materialises, the RS exhibiting phenomenal wheel and body control, able to ride with sophistication despite the broken, difficult tarmac that the Isle of Man presents. The RS is unfazed, tracking with authority, the steering uncorrupted by the vagaries of the road’s surface, yet in no way detached from it. There’s feel - masses of it - what with the RS’s ability to mask the superfluous without diluting the detail at the wheel’s rim being its signature, and the chassis’ ability is a key enabler in allowing the engine and transmission to do their very best.

Grip levels are, even on damp tarmac, remarkable. The steering’s feel is paired with a weighting, speed and directness that allows you to turn the RS in with utter confidence, the front end response always accurate, it making the previous GT3 RS feel mute in comparison - ridiculous as that might sound. Key here is that suspension, the way it’s able to manage the wheels and body movements leading to the RS’s phenomenal agility. Obviously there’s the possibility of bringing the power into play, the RS’s limits so easily read, having it move around under you feels entirely normal, the chassis so predictable and that engine so immediate in its response it positively encourages it.

You could get carried away by the speed that all of that brings, but it’s actually a by-product of the overall experience, which is about as immersive and engaging as it gets. To drive the new GT3 RS, even at ordinary speeds, as opposed to the speed enlightened, no limits possible on the Isle of Man’s derestricted roads, is special. What Porsche’s GT department has achieved here is, genuinely, difficult to comprehend. Especially given how high the bar was set with the previous car.

RS models are typically about small gains, a collective increase for those purists seeking engagement. Usually it’s incremental, here it feels more revolutionary, a leap that takes the RS to a new era, albeit one where its days are numbered by regulation - it notable that its more powerful, turbocharged GT2 RS relative produces better economy and emissions figures.

If only it were that easy. But, yes, if you can, do. If you even like the idea of the GT3 RS, and to get near being considered for a new one you’ve probably already owned a few, then this one will recalibrate your senses. It really is that good and, as ever, looks like a bargain given its breadth of ability and performance.