Motor1 Group Test: The fizzy little Volkswagen Up GTi has caused quite the stir amongst enthusiasts, so how does it fare against the chic Renault Twingo GT?

It’s a genuine mystery why there aren’t more cars like these. Small, affordable, and packed with fun. It seems like a recipe for the masses, and yet the Volkswagen Up GTI and Renault Twingo GT have almost no direct rivals. An Abarth 595 is about it.

So, if you’re after the weirdly rare blend of tiny but practical, and fun but cheap, you’re probably looking at these cars. The Volkswagen Up GTI is the newest protagonist, and it arrives with a 113bhp turbocharged three-pot, a six-speed manual and front-wheel drive. Simple, but effective. The Twingo GT has a more unusual layout, with its 0.9-litre, 108bhp three-pot hidden beneath the boot, and sending power to the rear wheels via a five-speed manual gearbox. Rear engined, rear-wheel drive, turbocharged… It’s basically a £14k Porsche 911, right? Well, here’s hoping.

The Up costs much the same at £14,150 for the five-door model (the three-door costs £13,750), but ultimately both of these pint-sized performance cars promise epic levels of bang-for-your-buck. 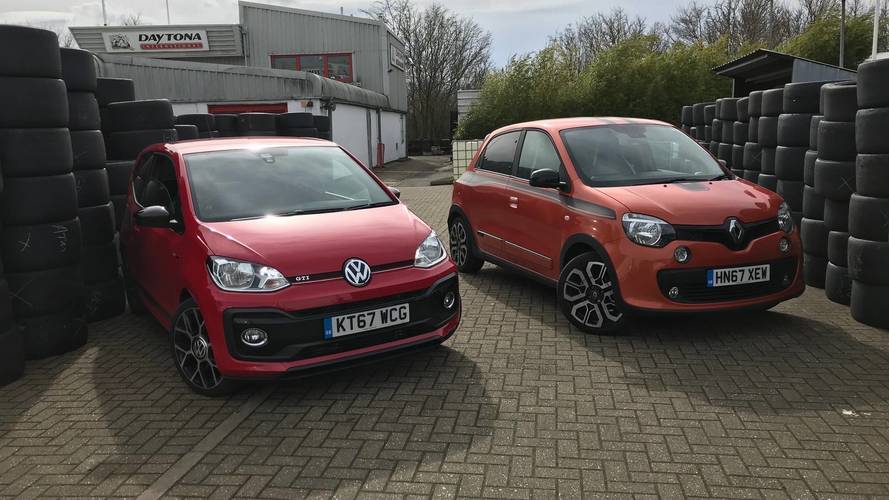 How do they drive?

Swing the Up into a ballsy hairpin and it sticks its nose to the ground and scrabbles around with a fairly neutral stance, and impressive grit and determination despite its fairly narrow tyres and noticeable body lean. The steering isn’t the most feelsome, but it’s well weighted and has a great build of confidence as you flick this tiny GTI about. 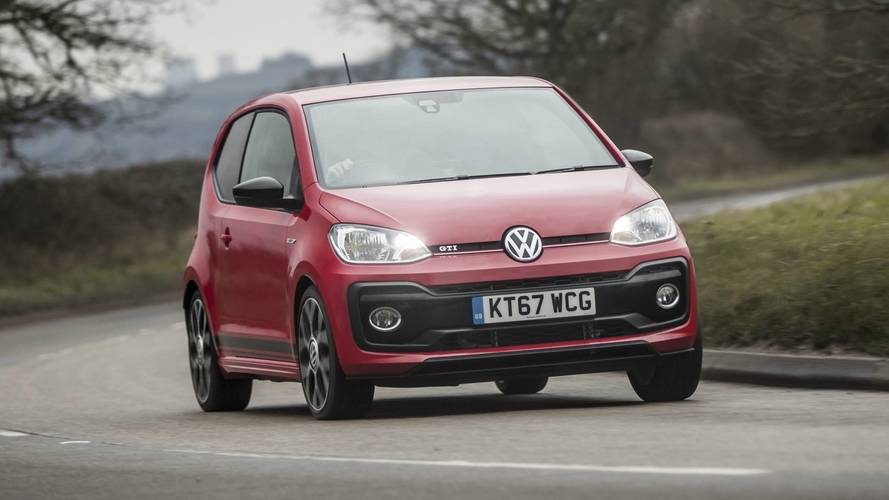 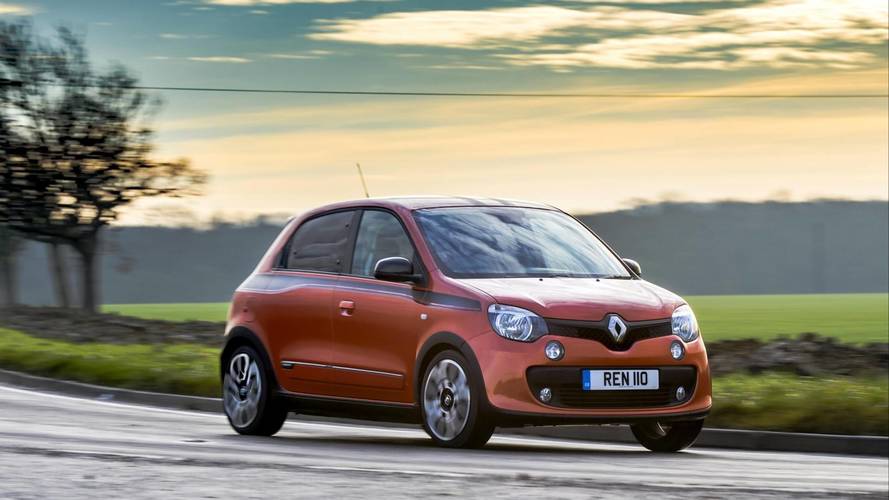 By comparison, the Twingo is let down by oddly gloopy steering that's both vague in its response and overly-keen to self-centre. Which is a shame, because the chassis itself feel quite willing and grippy, and the thrummy little motor has plenty of character, if also quite a lot of lag before the turbo breathes life into it.

Of course, chuck the little Renault about and it is fun, but it lacks the polish and outright ability of the grippier, more stable, more communicative VW. 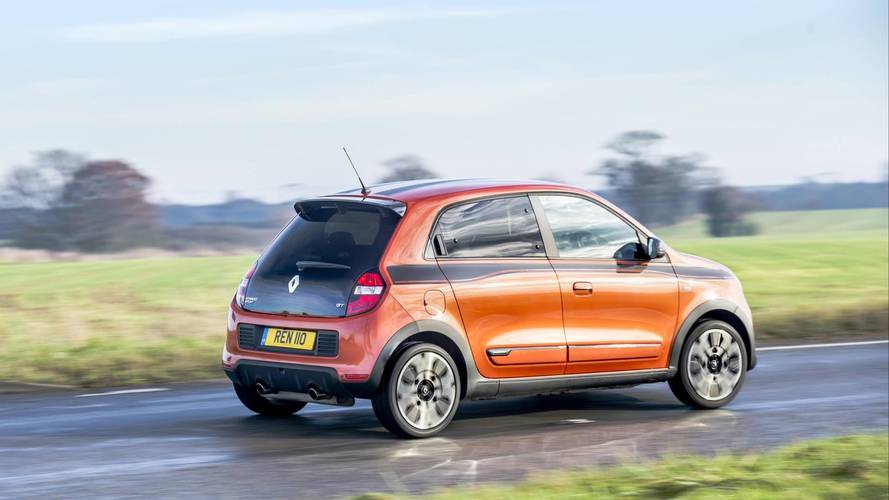 The VW gets the nod for its performance, too. Both of these cars weight around 1-tonne, which is remarkably little by modern car standards – even city cars – and that featherweight aspect is critical to why they feel so bubbly and willing. But the Up GTI’s engine punches earlier and for a bit longer than the Renault's, plus it’s got a much slicker gearshift and is generally the more refined car.

And refinement does matter. Of course, these are small cars that aren’t often going to be used as daily motorway commuters, but the Twingo’s unsettled, springy ride and noisy manners at higher speeds make it more tiresome to live with than the Up, which is firm but well controlled and generally has less vibration and hubbub going on. For a sporting little number, it copes well with UK roads. 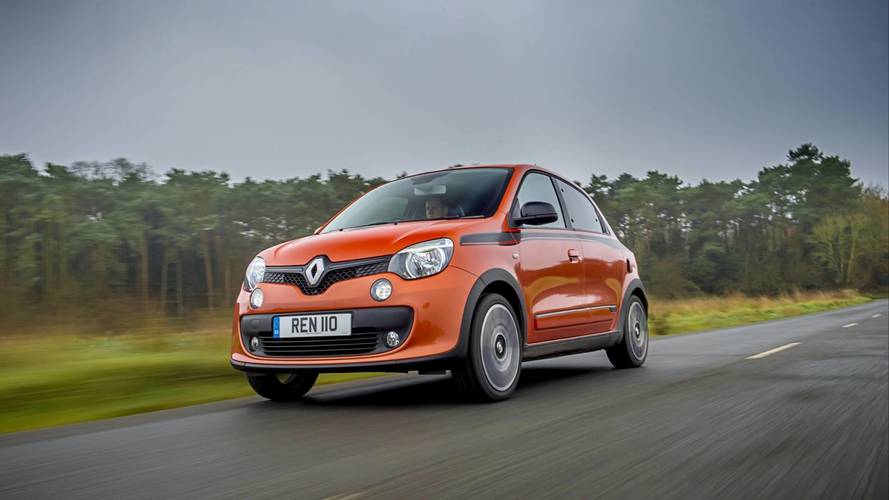 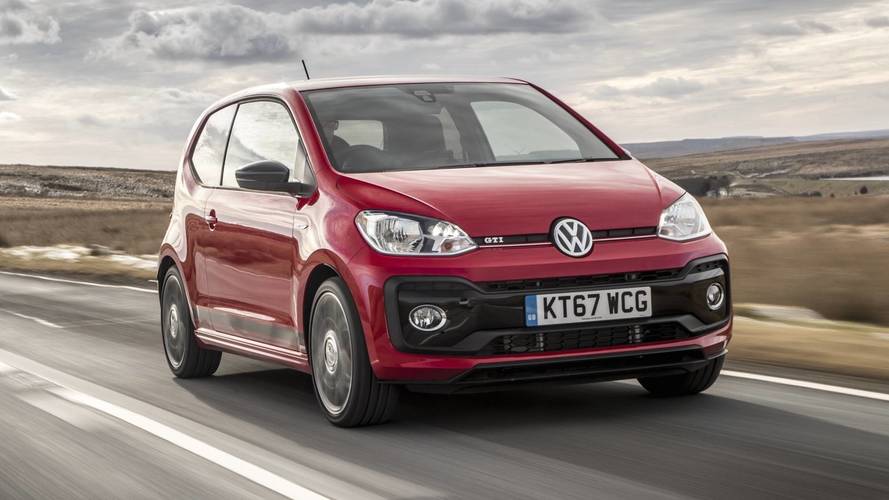 Ultimately, the Twingo handles itself rather well in extreme cornering and when being ragged about with impunity on a kart track. Drive it hard enough and you can find the micro-sports car feel that its on paper credentials promise. But the rest of the time, the oddly unpleasant steering, bobbly ride and persistent burr of tyre and wind noise, not to mention a poor driving position (more on which in a moment), suck the joy out of it. Although we should give a nod here to its remarkable turning circle, which is fun in its own right to make the most of as you swivel the car virtually on its own length to squeeze into that unlikely parking space.

The Up, by contrast, is what you expect a GTI to be. There are cars out there with more drama – the enormously entertaining if compromised Abarth 595 for one – but for balance of being great fun in all kinds of conditions and also easy to live with, the Up is leagues ahead of the Twingo. 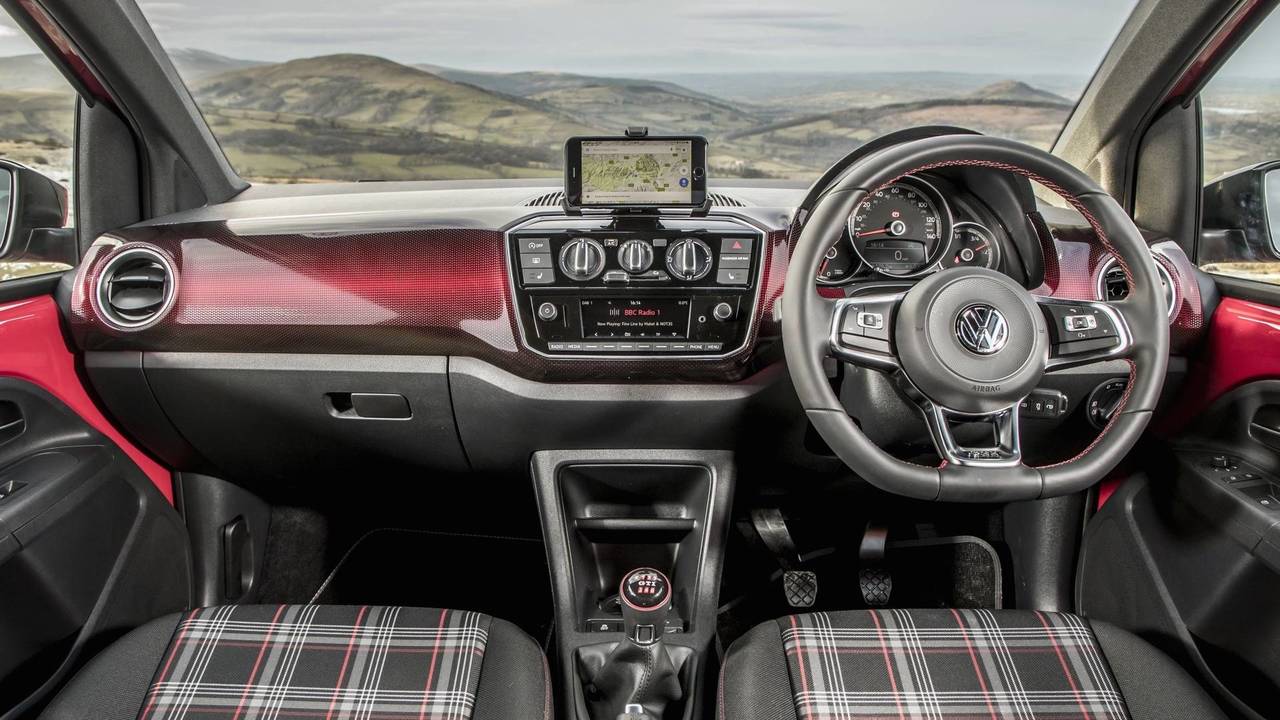 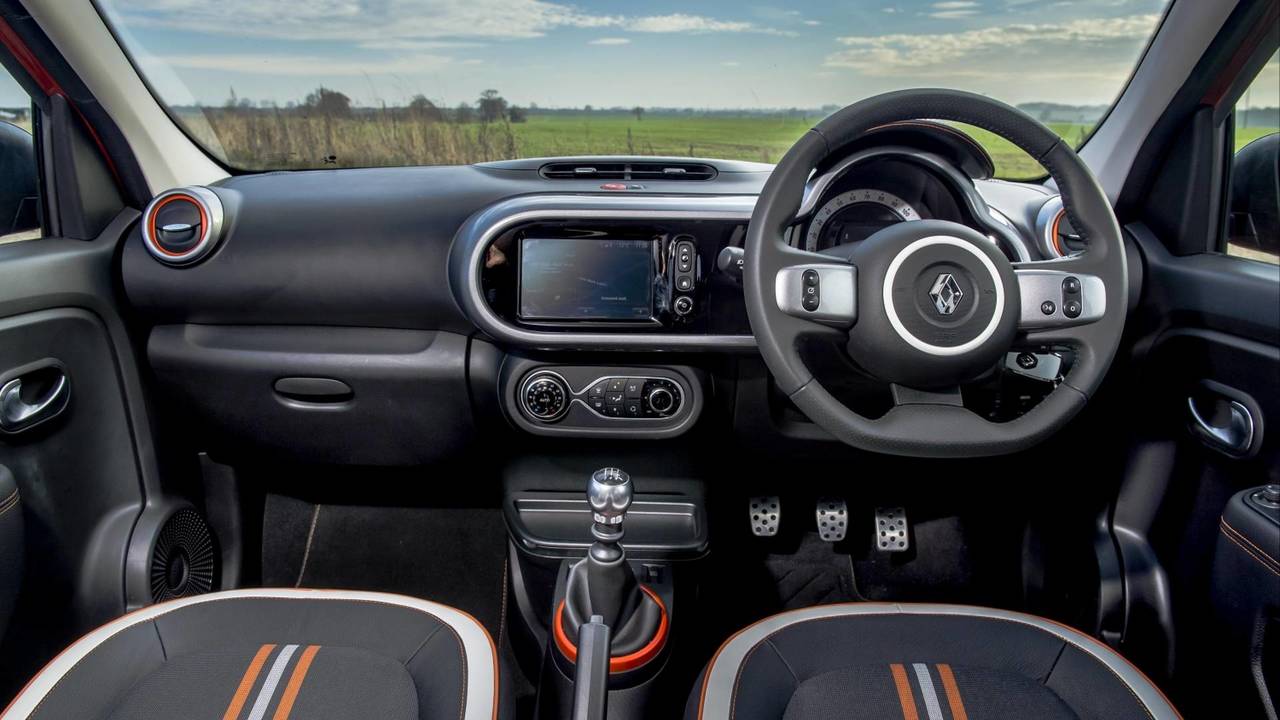 The VW Up GTI’s interior is logical and looks great. There are some cheap plastics about, but what did you expect in such a cheap car? The coloured, textured plastic inserts on the dash look cool, and there are various suitably appealing GTI logos and nods to the heritage of that name in the red stripe and tartan upholstery.

More than that, the seat adjusts enough to let most drivers get comfortable despite the lack of steering wheel reach adjustment in either of these cars, and the pedals are well-placed for heeling-and-toeing, although they could be improved further with a slightly lower, and more progressive brake pedal response. 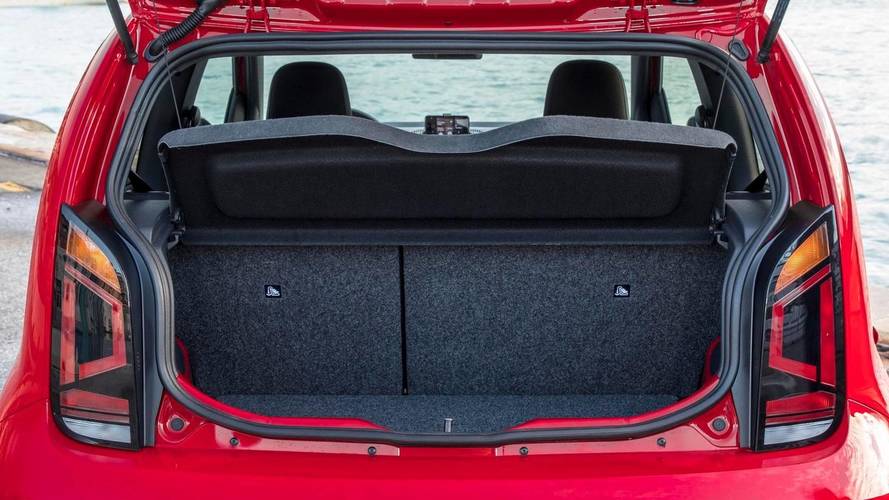 Mind you, that little quibble is nothing to the Twingo’s problems, which start with a high floor that means it’s easy to trip in or out of the car, and which also results in you sitting with your knees bent up – whether you’re driving or not. That matched to the hard seat makes this car outright uncomfortable for anything but a short city hop.

There’s also more room in the back seats of the Up than there is in the Twingo, and while Renault has been clever to fit a fairly useful boot above that engine in the back of the Twingo, it seems a shame that there’s no luggage space in the nose of the car. Instead you just get the screen wash bottle up there.

What the Twingo does beat the Up on is equipment. The GT gets heated seats, auto wipers and lights, and a touchscreen with sat-nav, where the Up doesn’t get any of that – just a mobile phone holder atop the dash with a USB input beneath it and standard Apple CarPlay and Android Auto. 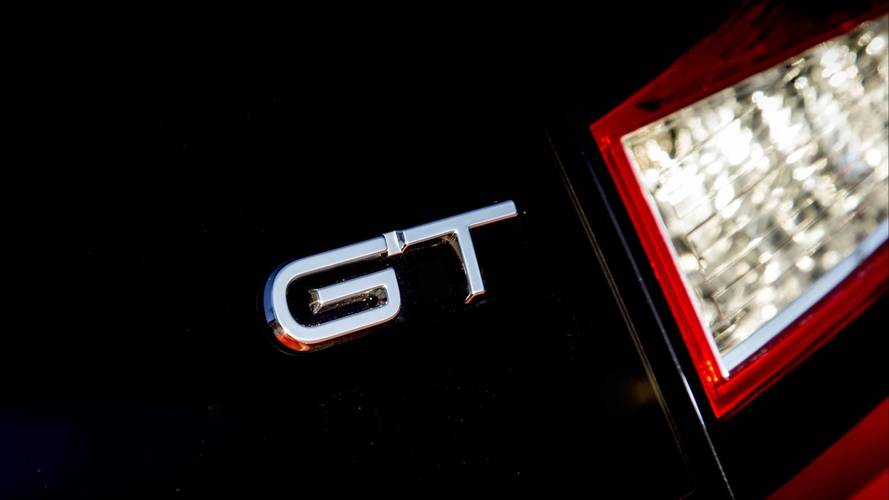 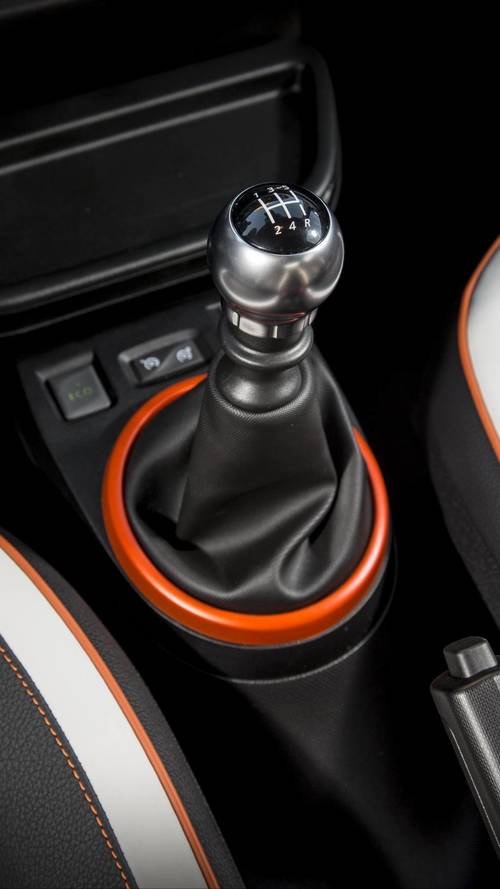 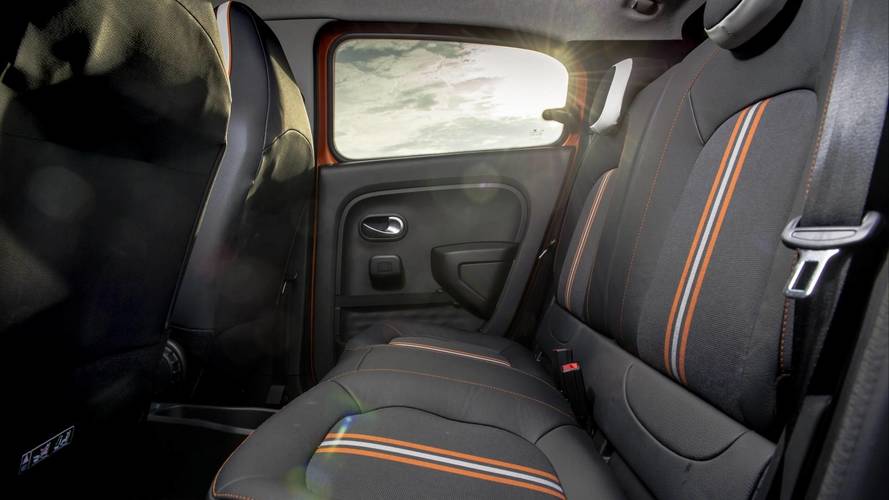 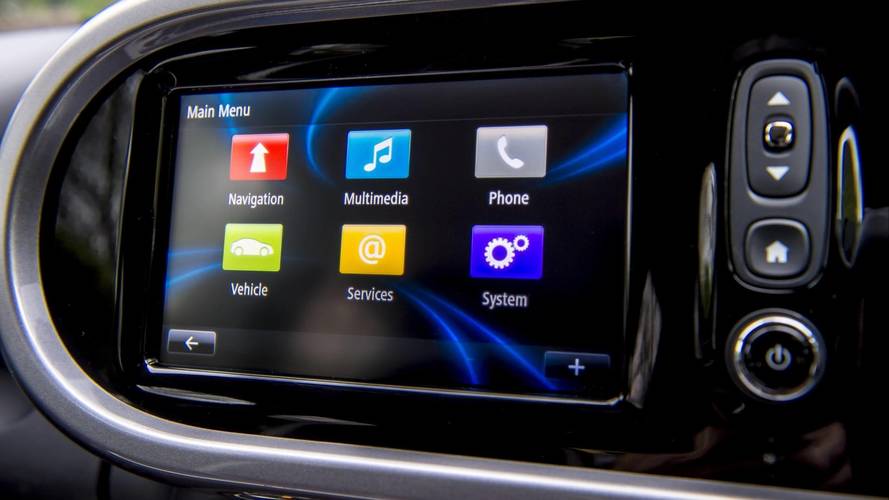 Although the Twingo has a higher on-the-road price officially, Renault will give you big discounts which will see it drop to usefully less than the Up. Put a £1500 deposit down on a three year PCP finance deal and the Twingo will cost £210 per month where the Up will come in at £250. The Renault wins the insurance game, too. It’s a couple of groups lower than the Up GTI, and when we got quotes for an 18 year old student who’d just passed their test, the Twingo came in at around £1400 per year and the Up was closer to £1600. Still pretty good for cars with this much vigour on offer. 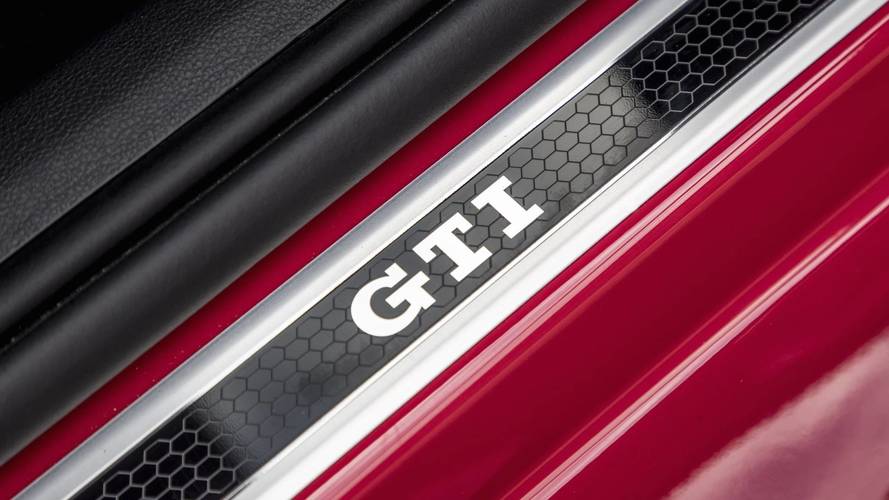 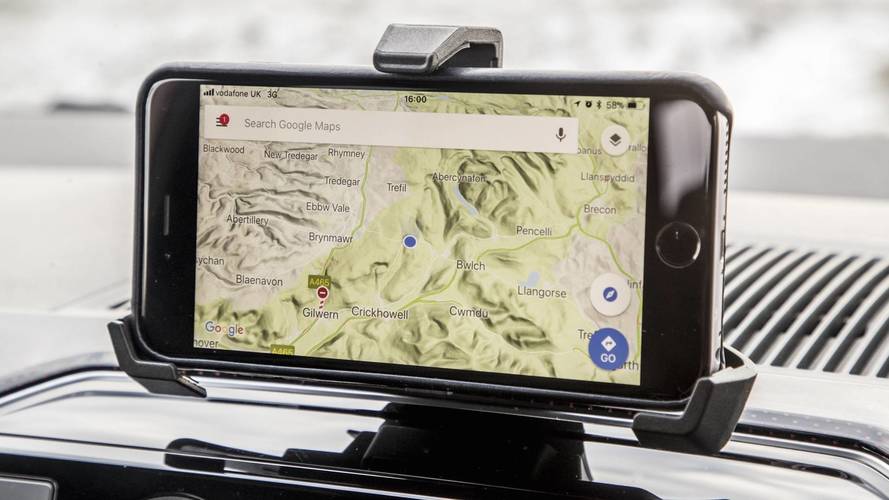 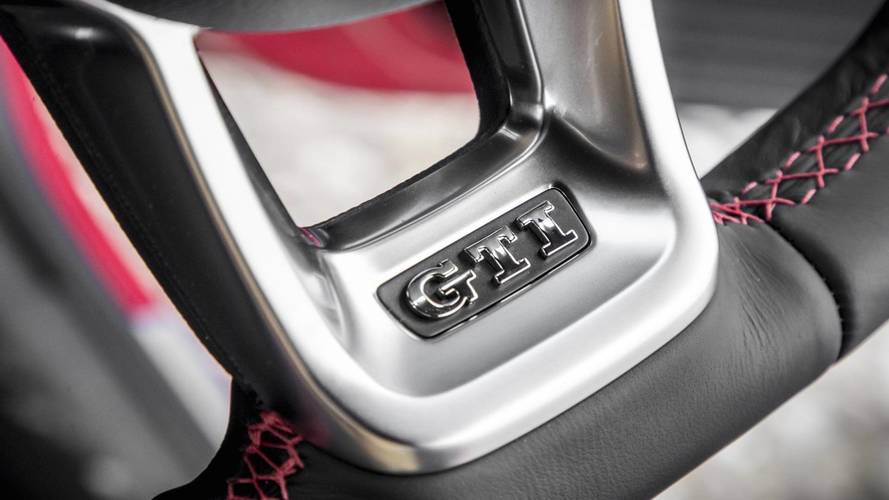 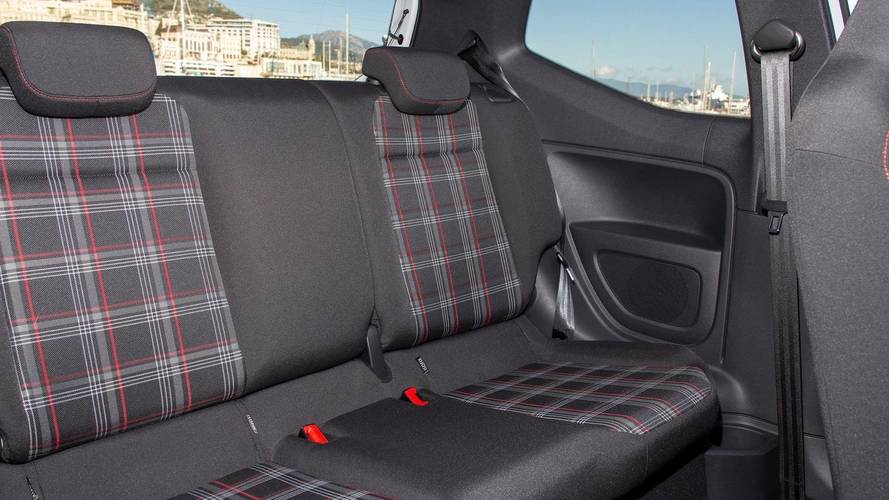 We’re disregarding official fuel figures as the Up was tested under newer regulations designed to reflect a more real-world figure. We saw around 38mpg in both cars during quite varied use with some hard on-road driving thrown in, so you can expect to see over 40mpg quite easily.

Predicting resale values is often a dark art but here it’s pretty clear that the Up is going to hold onto its value far better, so if you’re thinking of buying your raucous city car outright and possibly selling on in the future, the VW is the way to go.

And the winner is…

The VW Up GTI is the clear winner here. The Renault Twingo GT is not without charm and appeal; it looks cool, sounds cool and handles with some reasonable pizzazz if you really push it. But it asks far greater compromises in its comfort, refinement and practicality than the Up, which is also the better-handling car. Grippier, more immediate, just more fun, more of the time.

After all, the Up GTI makes a big roundabout or a whirly multi-storey car park exit a thing of joy, and that’s its real party trick. Not the fact that it’s great to drive down an open country road, but the fact that it’s fun and approachable to drive around your local town centre, even at a moderate pace. The Twingo is only fun when it’s on the proverbial door handles, the rest of the time it’s really rather hard work, and that’s going to outweigh its impressive costs, style factor and equipment levels.

Dig a fraction deeper and get the Up. You really won’t regret it.

*The VW Up GTI was tested under different, more stringent EU emissions tests