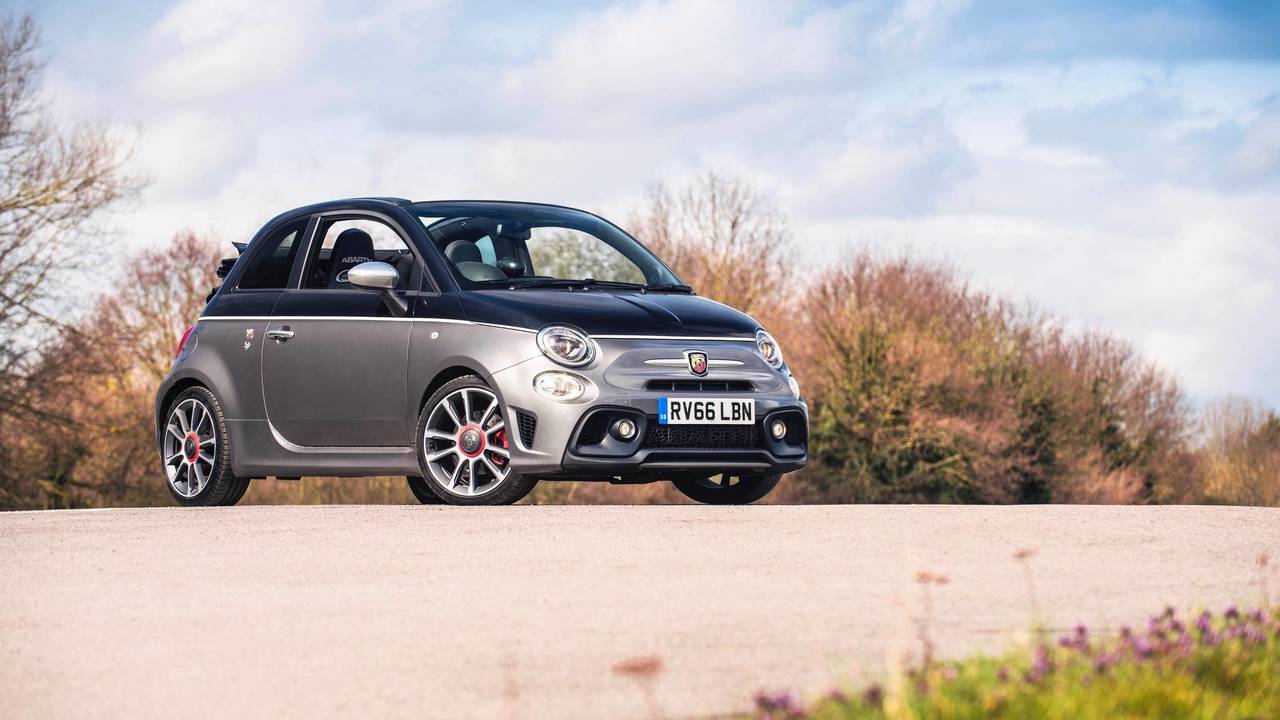 It's flawed, but you can't help but love it.

Meanwhile, it’s fair to say that both Fiat and Abarth brands have been left unloved with nominal changes to the core model range. Fortunately, performance brand Abarth continues to prove popular and resourceful, creating a series of pocket rockets based on the three-door Fiat 500.

This is the Abarth 595 Turismo, a junior hot hatch with a senior pricetag. It’s available with a fixed or roll-back roof - depending on whether you’re driving in Birmingham or Brighton - and joins the existing Scorpion-badged fast fleet of 595, 595 Trofeo, 595 Competizione, the 695 XSR Yamaha and 695 Rivale.

What distinguishes the above Abarth models from their humble 500 origins is performance and aggression. All 500-derived Abarth versions benefit from the same beefed-up bodykit and turbocharged 1.4-litre petrol engine, although the 595 Turismo has been tuned to develop 162bhp at 5500rpm. That’s 49bhp more than a Volkswagen Up GTI.

Visually, the 595 Turismo can be identified by the classy two-tone paint scheme, lighter 17-inch Granturismo alloy wheels, front and rear disc brakes with red-painted calipers, twin chrome exhausts and a rear diffuser that can be finished in white, red or black.

Inside, the cabin has also been overhauled with a leather-trimmed flat-bottom steering wheel, front leather sports seats with ‘Abarth’ emblazoned on the headrests, plus alloy pedals and gearknob. A five-inch touchscreen infotainment system with digital radio and built-in navigation is offered as standard, but it can (and should) be upgraded to the high definition seven-inch touchscreen.

Brimming with attitude. Even on start-up, the vocal tailpipes produce the sonic quality of a city car masquerading as a miniature Ferrari 488. Drive the Abarth 595 Turismo at urban speeds and it feels sporty, fizzy and exciting, with terrier-like aggression and pointy precision. The 0-62 sprint takes 7.3 seconds, which is 1.5 seconds faster than a Volkswagen Up GTI. And with peak performance only accessible from higher up the rev range, there’s a genuine need to work the five-speed gearbox which is perfectly placed for rapid shifts.

Truth be told, the driving position isn’t great. The seat is mounted too high and the steering wheel features no reach adjustment, so you find yourself perched over the controls like you’re driving a Ford Transit. Perhaps familiarity would breed less contempt.

Driving the Abarth at speed is certainly more of a challenge. Not only is the car less willing to turn into corners, the steering doesn’t like to communicate what the front wheels are doing as readily, which makes it difficult to both position the car and feel where grip levels begin and end. Switch to Sport mode, which sharpens the throttle response, makes the steering unnecessarily heavy and creates a racier TFT display. Sadly, the experience still feels a bit too detached for a junior hot hatch.

And then there’s the ride quality. The 595 Turismo features Koni rear suspension with Frequency Selective Damping (FSD), a technology that uses an extra internal oil reservoir to help separate low- and high-frequency bumps. This sophisticated approach may reap benefits on the glass-smooth surface of race circuits, but the execution isn’t anywhere near supple, fluent or forgiving enough to deal with a typical British B-road.

There are further issues: the cabin is small, even by small car standards, the speakers sound tinny and distort at volume, the steering lock is laughably poor for a city car and it only musters a three star Euro NCAP crash safety rating.

Despite highlighting some pretty sizeable flaws in the Abarth 595 Turismo’s armour, this remains a very compelling and hugely desirable small car. Strong resale values only serve to support this argument.

For all its idiosyncrasies, it’s the sort of small car that wriggles under your skin. Sure, the newly released Volkswagen Up GTI may be a more rational, practical and affordable option, but this is still worth putting on your shortlist. Because when was buying a junior hot hatch ever about being rational?