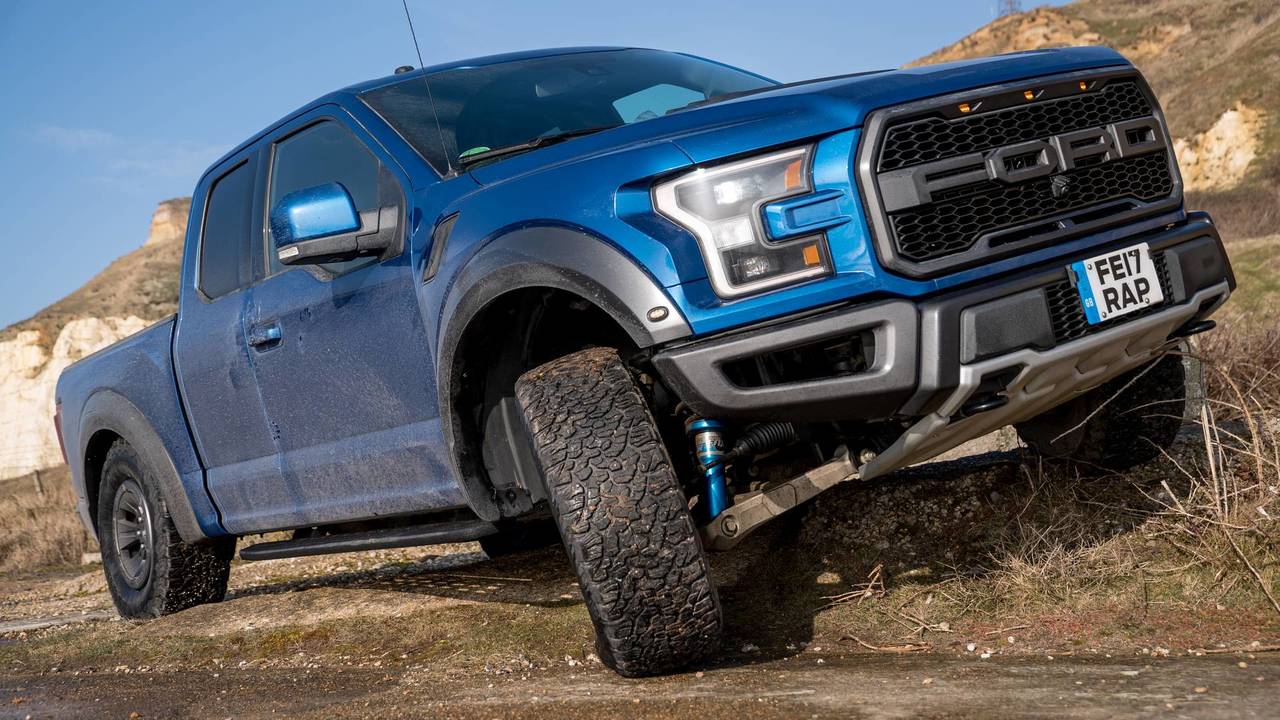 We get a go at Ford's giant performance pickup on UK roads.

The F-Series truck is nothing short of a phenomenon. In 2017, Ford sold 896,764 units globally which, despite an automotive backdrop increasingly dominated by electrification, downsizing and connectivity, was up by 9 percent year on year.

The F-150 may be the smallest model in the F-Series range, but it’s currently the world’s best-selling vehicle and has been America’s best-selling truck for the last 40 years. The Ford F-150 Raptor is America’s idea of a go-faster version. Inspired by Baja desert racers and developed by the same Ford Performance division that brought us the Focus RS, Mustang and GT supercar, the Raptor has been built to go almost anywhere at speed.

It’s basically a leather-lined Dakar truck for the family, and it uses the same engine as the Ford GT supercar. Seriously. Under that bonnet-the-size-of-a-county is the same 3.5-litre twin-turbo EcoBoost V6 petrol from Ford’s Le Mans-winning, race-developed supercar - albeit retuned (and detuned) for torque rather than power. It develops 444bhp and 510lb ft of torque, which are bigger, scarier numbers than the previous Raptor, which used a larger capacity 6.2-litre V8.

It’s lighter than its predecessor, too. This may still be a 2.5-tonne truck designed for tackling vast open spaces, but Ford has managed to strip 220kg from the previous car’s kerbweight thanks to the smaller capacity engine and a mixture of military grade aluminium and composites.

Everything about the F-150 Raptor shouts aggression and robustness. From the Ford badges emblazoned on the grille and rear deck, to the undeniable physicality of the thing. Even the dash display greets you with a ‘BUILT TOUGH!’ memo, as if you’re likely to forget.  Look underneath the car - you probably won’t event need to crouch - and you’ll quickly spot this vehicle has the trousers to match the talk.

There is a solid rear axle with a huge amount of wheel articulation available, necessary for rock trails, while yump-absorbing capabilities are managed by a set of supremely expensive Fox Racing shocks. Mountain bike aficionados would spot those blue anodised cylinders of wonder from a mile away.

And yet, inside is all eight-way electrically adjustable seats, cruise control, reverse parking cameras and the same Sync 3 infotainment system you’d find in a Ford Focus family car. There are roof-mounted switches to allow customers to install a variety of extra-light bars and fog lamps for off-roading; and as you’d expect for a life on the road, there is plenty of storage including an armrest-cum-coolbox that is the size of a miniature beer fridge.

Want more proof that this is a genuine, pre-eminent dune basher? A completely stock version of this car finished 49th in the gruelling Baja 1000 off-road endurance race. If that’s not putting your money where your mouth is, we don’t know what is…

Like somebody tackling snow drifts in Alaska ended up taking a very wrong turn to Andover. It also feels incredibly fun, like Ford wanted to create the best possible BMX bike for grown-ups. Before we get all giddy with off-roading excitement, we need to address the sheer size of the thing. The Raptor may be the smallest model in the F-Series range, but in the land where Jack Russell terriers look big, an all-American truck that measures 5.6m long and 2.5m wide is somewhat lost in translation.

Merely climbing on board elicits the same feeling of vertigo as scaling a stepladder to clean your bedroom windows. Once you’re in the armchair of a driving seat and have acclimatised to the reduced oxygen levels at this altitude, you’ll be struck by the oversized nature of the controls and how relatively compact the cabin feels. Much like the Land Rover Defender, a boxy, huge exterior doesn’t mean a spacious cabin and although the Raptor features a pair of coach doors to improve access, the second row of seats are barely acceptable for children. More attention, it seems, has been laboured on the truck bed, which features plenty of integrated hooks and latches, plus the optional spray-in liner and integrated tailgate step.

The Raptor’s sheer bulk makes driving through sleepy English towns quite stressful, like being on permanent red alert. Multi-storeys are out, you’re constantly being jiggled around at low speed, you’re fixated on not creating huge road blocks and even city cars cause you to elicit involuntary intakes of air as they squeeze past you. We’re not sure you’d notice if you hit them anyway…

Yet all is forgiven for that performance. It’s almost good enough to convince you to move to the desert, or at least turn off the main road. Flatten the right pedal on any road or muddy track and after a brief pause from the 10-speed automatic gearbox, the colossal tyres scrabble for grip and the Raptor barrels to 60mph in 5.3 seconds, before continuing with the unstoppable force of a German Shepherd that's spotted a steak on the floor. The steering is woolly and vague on the road, but it makes more sense when the surface is broken and the path unclear.

There are five driving modes to play with: Normal gives you 2WD for the day to day, Weather for when it gets damp, self-explanatory Rock Crawl or Mud & Sand and the full fat Baja mode, which relaxes the traction- and stability-control systems. The Raptor possesses an unfeasible amount of agility in Baja mode, engaging the vehicle in high-range four-wheel drive, and preparing the transmission to upshift as infrequently as possible. Not only can it perform muddy donuts with a single input of the steering, it'll do big yumps, too - the top spec hydraulic bump stops offering some essential suspension cushion. It’s hugely addictive fun, until you realise you’re ripping up a field in a 2.5-tonne truck and you’re getting 11mpg.

On the right road, preferably one that is fast, empty, accommodating to wider, heavier machinery and doesn’t even look like a road, the Raptor is magical. On the wrong road, it’s basically a very impractical bus. And here’s a UK-specific rub: unlike other models in the Ford Performance folio, the F-150 Raptor has no global remit and isn’t offered for official sale in Britain.

Prices for the SuperCab model we tested start from $49,520 in the USA, or less than £36,000. Unfortunately, after considering shipping fees, import duties and type approval, an independent import specialist would have to charge nearer £80,000 for the same vehicle. And that’s for a Raptor still in wrong-hand drive.  For that price and that much effort, you’d have to really want one.