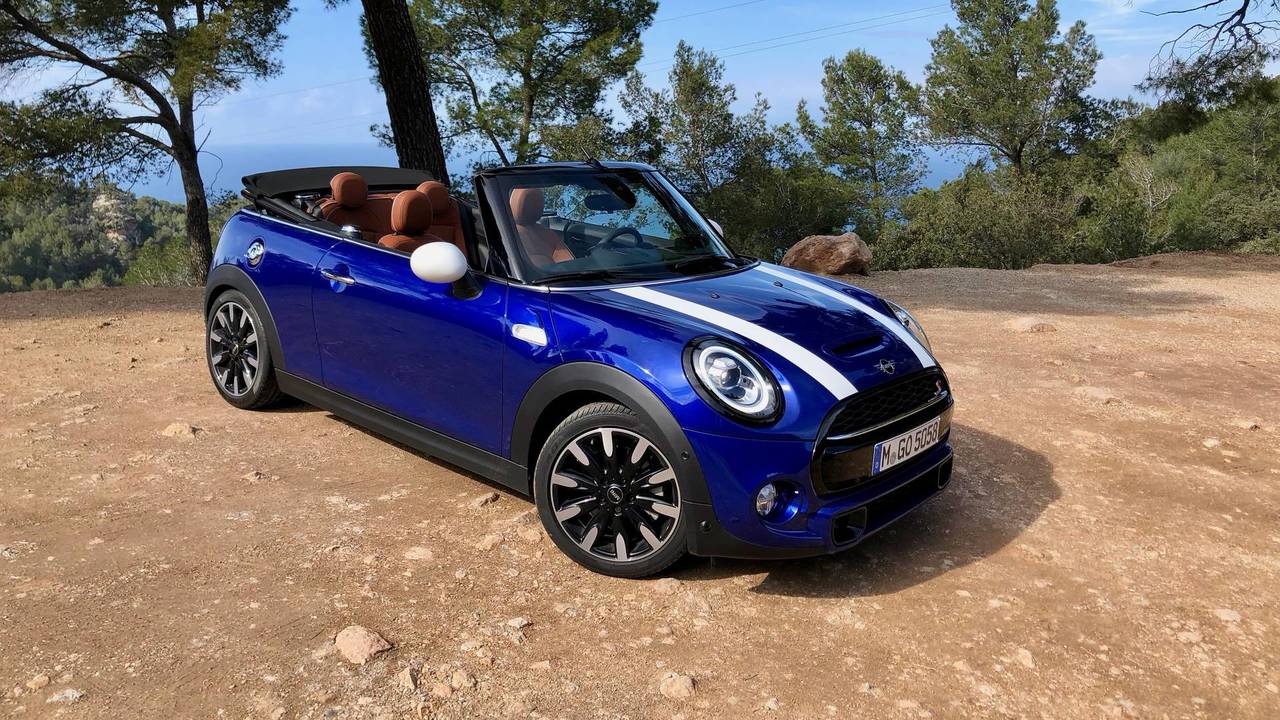 The UK is an awfully rainy place, with an average of 106 soggy days a year, so it might surprise you to find out that its residents are some of the most prolific buyers of convertibles in the world. The Mini Convertible is amongst the most popular combining characterful looks with alfresco motoring. A mid-life update for the latest Mini brings new features and an extensive catalogue of customisation.

There aren’t any dramatic changes to be found here, but a few nips and tucks keep the Mini looking fresh. It retains that familiar short and squat stance but now its round, doughy eyes are full LED units as standard. It’s the same story for the taillights, except they sport a distinctive and rather intricate Union Flag design. Some will love their individuality, others will loathe them, but if you want a new Mini in the UK, they’ll be fitted regardless. The Cooper S model pictured here features the usual collection of sports bumpers and skirts, but also wears new Starlight Blue paint. There are also lighter alloy wheels on offer and Mini fanatics will have already noticed the new more simplistic badging.

Inside the Convertible it’s your usual Mini affair with premium materials and an upmarket design. Optional heated leather seats are perfect for chilly roof-down days and offer good support when you’re driving spiritedly. A new addition to the cabin is the latest iteration of Mini’s touchscreen infotainment system, which is based on BMW’s iDrive (no bad thing). It’s easy to use and pleasing to the eye being, illustrated with bright colour-coded menus. There are a handful of shortcut buttons and a scroll wheel that can also be used to navigate the system, making it far easier to use on the move than blindly stabbing at a touchscreen with tiny, icons.

Rear space has never been the Mini’s strongpoint, but the Convertible can facilitate a couple of adults for short trips. Children shouldn’t be a problem in the back and large rear windows do ease any sense of claustrophobia. The Mini Convertible might not have a huge boot at 215-litres, matching the hatch, but it does feature something called easy load; Pulling a pair of leavers widens the opening to fit bulkier bags. The tailgate itself also supports up to 80kg of weight, making it an ideal picnic bench on summer days. It’s certainly the most practical convertible small car, short of bigger and pricier rivals like the Audi A3 Cab, which is particularly impressive given that this is also the only small car with a proper, full convertible roof rather than a cleverly marketed, full-length sunroof.

Customisation has always been a staple of the Mini brand and this new car offers even more opportunity to make it your own. As well as a broad spectrum of two-tone colour combinations and various interior illumination options, you can now have 3D printed parts made bespoke for your Mini. A dashboard insert, indicator plaque, puddle lighting and kick plates can read whatever you desire… Well, almost anything, there is a black list of naughty words. The best part is that the dashboard insert can be easily removed and replaced, meaning that you don’t have to find someone with your name to buy the car off you.

The new car is almost mechanically identical to its predecessor, so Cooper S models are still powered by a punchy 2.0-litre turbocharged engine. 192bhp makes this a brisk little motor with a 0-62mph time of 7.1 seconds. The biggest change to the oily bits is a new seven-speed dual-clutch automatic gearbox option which offers well-judged and fairly seamless shifts. The gears can be summoned via the car’s wheel-mounted paddles, but upshifts can be hesitant if you use the paddles in anger. Let loose on some challenging mountain roads, the Mini Cooper S is a joy, delivering on the promise of a sportier drive than key rivals like the Fiat 500C and DS 3 Cabrio.

This Convertible doesn’t feel quite as tight as the hatch, largely due to not having as much body rigidity and added weight, but that’s not to say it isn’t good fun. Drop the top and listen to the exhaust fart and pop in a brilliantly churlish manner as you tear off down the road. Chuck it into a corner and the Mini keenly homes in on the apex. There’s loads of front-end grip and the precise, weighty steering will delight driving enthusiasts. Good body control keeps the car in check through sweeping bends, but this can be further improved by firming up the optional adjustable dampers. The Convertible weighs some 120kg more than the hatch - something you notice under hard braking - but as far as hot convertibles go, Mini has done a good job on the whole.

Used in a more everyday fashion, the Cooper S Convertible’s ride can become irksome. Of the few rough roads we found in Spain, the car tended to thump into imperfections even with the suspension in its most compliant setting — not ideal considering the current state of British roads. Rear visibility with the roof up is also restricted, although this is somewhat mitigated by a reversing camera being standard equipment. The roof can be stowed in 18 seconds and, conveniently, at speeds of up to 18mph. Cruising around below 40mph the wind isn’t much of an issue, but at higher speeds you might want to grab that optional wind deflector as it makes a huge difference. Motorway performance is good, if a little noisy, with the turbo providing strong in-gear acceleration.

If you’re after a drop-top hot hatch, the Mini Cooper S Convertible is the go-to candidate. Sure, if you’re after the best handling Mini you should make your way to the hatchback, but for topless fun this convertible scores well. It’s a real feel good car with bags of character and a good turn of pace.

The big stumbling block is price. The Mini Convertible in Cooper S guise starts at £23,830 before you even look at the costly options list. That’s a lot of money for a little car, although strong residual values allows for more affordable PCP plans. Put £4k down and on a three year PCP you’re looking at around £270 a month - some £200 a month cheaper than a DS 3 Cabrio Performance.

Some will grimace at the various customisation options and write them off as tat, but there will be plenty of customers who love the idea of creating a Mini that is truly personalised. The bespoke 3D printing is a first for the industry and something that we think will catch on as the technology becomes more widely available.

The Mini Convertible has a strong following and these latest tweaks give us little reason to think that’ll change any time soon. If you’re in the market for a small convertible, this should absolutely be first – and probably last – on your shortlist.