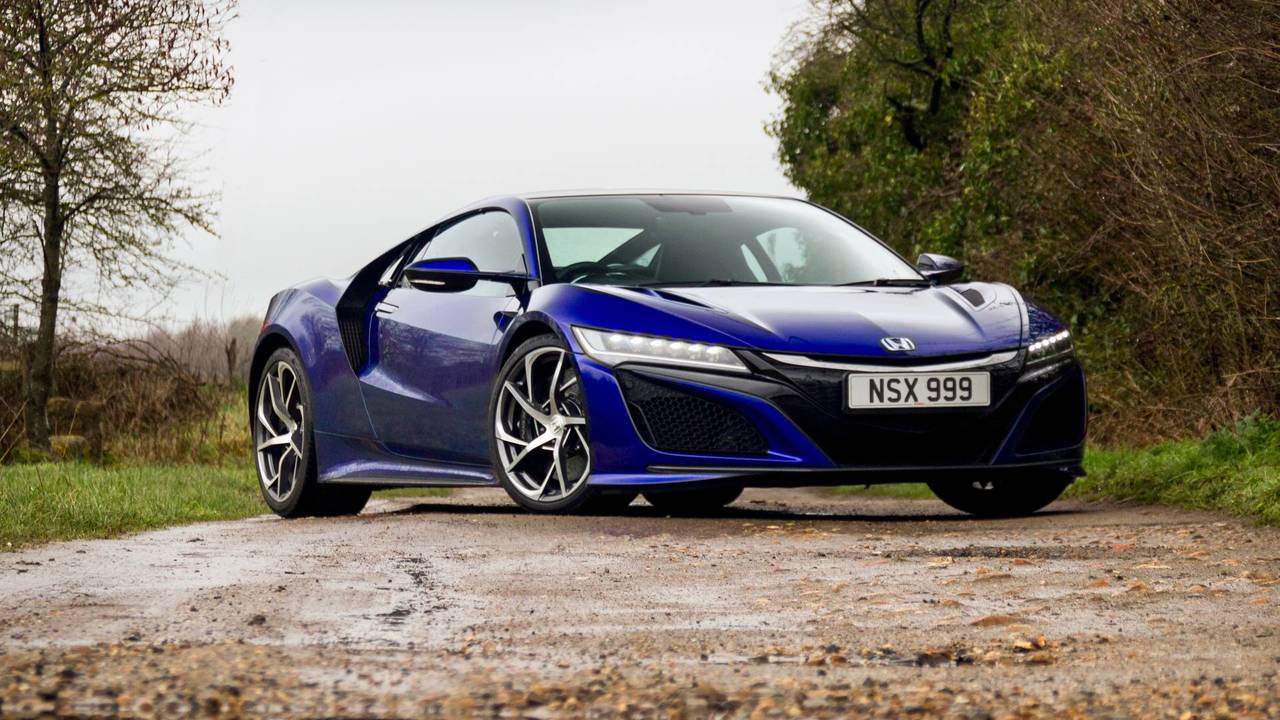 The original Honda NSX is one of few cars that has the mutual respect of all car enthusiasts, regardless of which four-wheeled tribe they belong to. Why? Because it was the car that proved that you didn’t need a prancing horse on the bonnet to have a thoroughbred supercar. Today the NSX has been reincarnated as a hybrid supercar. It’s full of tech, but can it still prove to be the people’s champion?

Sitting like freshly folded origami on the tarmac, the new NSX's design is nowhere near as reserved as its predecessor. Clean creases etch a raked shape that immediately gets heads turning. It’s low, wide and could easily pass as a Transformer. If its aim is to steal attention away from the more quietly styled McLaren 570S, it has succeeded.

Inside things are a bit more conventional with a clear digital instrument cluster and a pair of highly supportive sports seats. For a supercar the cockpit feels spacious with plenty of glass keeping any sense of claustrophobia at bay. Our test car featured a carbon pack that detailed the steering wheel and instrument binnacle with the lightweight material. However, there are a few disappointingly average plastics on clear display as well — not what you expect on such a costly car. The centre console houses a touchscreen infotainment system that is responsive, but if we’re honest, a bit of a faff to use. Something else that’s sub-par is the low resolution rear reversing camera.

Boot space is 125-litres, or about enough for two small bags, thanks to a small compartment behind the engine. Unlike an Audi R8, you won’t find any additional storage up front as that space is claimed by electric motors.

Underpinning this NSX is one of the most technologically impressive drivetrains this side of a Porsche 918 Spyder. While many of the Honda’s direct rivals are still playing with pure combustion, this car is one of the first in its class to embrace hybridisation. A conventional twin-turbo 3.5-litre V6 sits amidships, but it’s kept company by three electric motors. Total output is a potent 573bhp that grants this NSX a 0-62mph sprint of around 3 seconds and a top speed of 191mph.

The NSX’s mood is dictated by one of four driving modes. Quiet Mode enables this supercar to silently glide away on electric power alone, although that V6 will kick-in the second you give the throttle a bit of encouragement - in this regard a BMW i8 is keener to run on electric power alone. It’s a nice touch for slow urban driving where the relaxing absence of noise allows you to appreciate other stress-easing features such as its impressive visibility.

Sport Mode is this car’s natural state, where a combination of petrol and electric power reveals the advantages of being a hybrid. There’s no delay between twitching your right foot and acceleration. Instead of waiting for a turbo to spool up or the engine to reach its power band, the electric motors fill in the gap to create instant response. It goes without saying that the NSX is fast, but as you’re sucked back into your seat and the nine-speed automatic gearbox feverishly snaps through the ratios, there’s actually a real sense of composure. The intelligent all-wheel drive system maximises traction for this event of measured lunacy.

That said, the Honda NSX is by no means docile. Select Sport+ and the electronic shackles are loosened on a car that, despite having all-wheel drive, will bite if provoked. Through a twisting compilation of corners the NSX recipe is delicious. Everything you interact with as a driver is precise and well weighted, and all of a sudden this wide car shrinks itself around you as you’re given the confidence to push on. Torque vectoring boosts agility and the car has an impressively planted feel through fast corners too.

That said, being a bit greedy with the throttle mid-corner on a greasy day will get the NSX to step out. A stiffer suspension setting eliminates what little body movement there was in the first place, but we’d say this mode is too firm for daily use. The steering is communicative and we have no complaints about the pedal-box either. This NSX is totally fly-by-wire, meaning that there’s no traditional hydraulic connection between your foot and the brakes — not that you’d notice anyway. There’s a convincing resistance to the pedal making the brakes easy to modulate and the optional carbon stoppers themselves a great asset.

Track Mode takes away the electronic safety nets and reveals just how sharp the new NSX is when set to maximum attack. Its pace and precision are truly remarkable and I have no doubt that it’s every bit as quick as its McLaren counterpart on real-world country roads. However, it does lack some of the drama that its supercar rivals deliver in abundance. The NSX is missing a theatrical soundtrack or that feeling of jumping to warp speed when you snatch at a paddle for another gear. It’s fast, but not entirely furious.

The latest Honda NSX is ahead of the curve when it comes to hybrid technology in this category of performance car, that partially explains the sizeable £140k asking price. It’s masterful ability to immediately take off regardless of what the rev counter reads is uncanny and rather addictive too.

Should you buy one over a McLaren 570S? For raw supercar thrills, maybe not. But if you’re after what will likely be one of the most usable supercars out there, with the performance and visual drama to match the big boys, the NSX has no equal.