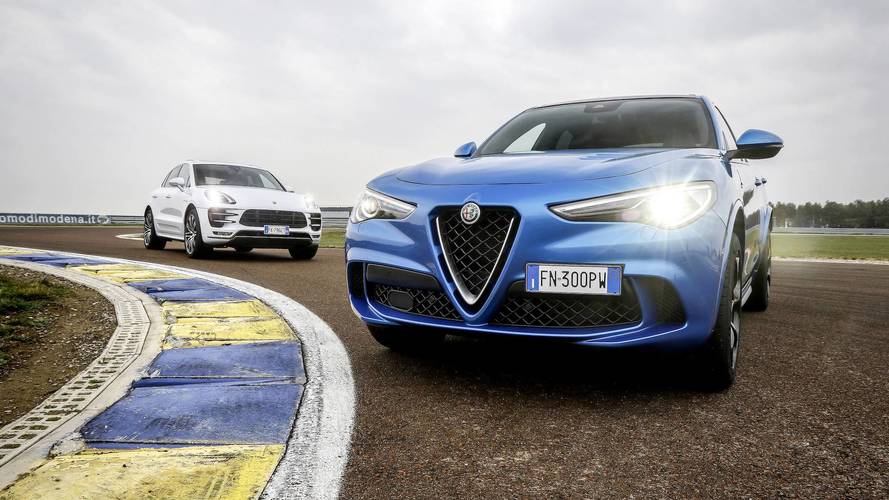 A slice of supercar performance in a package designed to fit kids, stuff, and life on board? You have our ear…

Congrats on procreation and/or having an active lifestyle. Now you need a vehicle that can carry your progeny and/or surfboard. However, you don’t want to join the diesel or small petrol brigade because life’s too short for the norm, so why not aim high, and grab a premium SUV with the biggest engine in the line up. Enter stage right: Alfa Romeo Stelvio Quadrifoglio and Porsche Macan Turbo (with Performance Pack).

Both the Alfa and the Porsche do rather well in the ‘big numbers’ stakes. Alfa’s seen fit to stuff the Giulia Quadrifoglio’s 2.9-litre turbocharged V6 in to its new SUV. The result is a 503bhp, 442lb ft monster capable of cracking 0-62mph in less than four seconds and breaching 170mph.

On the other hand, the Porsche gets a bigger 3.6-litre turbo V6 with a lower 434bhp power output. Torque sits at 443lb ft, a tiny bump over the Alfa. 0-62mph takes 4.4 seconds and it’ll top out at a pleasingly large 169mph. But it has another big number worth noting: weight.

The Porsche weighs in at nearly two tonnes, while the Alfa tips the scales shy of 1850kg. The German’s numbers may be large, but maybe large in the wrong places.

When it comes to looks the Alfa has the Porsche beat. While the German car looks pretty handsome on its lonesome, the Stelvio makes it look rather bland when the two are placed side by side.

Porsche’s straight lines and ‘I’m related to a 911, me’ looks are all well and good, but when you see Alfa’s swooping, flared, vented, contoured motor is, especially considering the amount of real estate to play with, very pretty indeed.

There may be plenty of power on offer, and one looks vastly better than the other, but what about living with your choices? The Porsche’s infotainment system may not be the latest Porsche tech (see the Panamera for that), but it works well, is intuitive, and doesn’t irk. The Alfa’s on the other hand… the less said about it the better. However, the Italian car comes with a clutter free centre stack while the Porsche is still clinging on to the old-school button heavy ways of the past. If you didn’t spec something on your Macan Porsche puts a ‘LOOK AT HOW CHEAP I AM’ blanking plate where your hard earned could have been.

Boot space isn’t scarce in either car – the Porsche gets 500 litres with the seats up and 1500 with them down. The Alfa edges it slightly with 525 litres seats up and 1600 with everything folded flat.

However, the Alfa’s practicality win is short lived because seeing out of the back of it is a challenge. Its rear window is so small it really needn’t be there, and turning your head to do a blindspot check is futile – the stylised rear window line creates a massive blind spot itself. Conversely the Porsche is easy to see out of, though its rear window is just as comically small as the Stelvio’s.

Numbers are one thing, drive is something completely different. The Alfa’s grunt surges it forward in a rather unsettling way – you simply don’t expect something so big and tall to move quite that quickly. While the Porsche feels like no slouch, the extra drama that comes with the Quadrifoglio’s noise makes the Italian feel like a far more exciting machine. Sure, the Macan makes a pleasant burble, but it’s got nothing on Alfa’s latest.

The Stelvio has a hugely sensitive throttle, slight inputs can make a huge difference giving it an aggressive quality that the Macan lacks. Porsche’s cars are all designed for a bit of light track use and as such they’re all pretty competent around them. Where the Alfa seems twitchy and on edge, the Porsche is composts, balanced, and easy to drive quickly. The German handles better than the powerful Alfa, that’s for sure. Both cars, incidentally, can go a touch sideways in the right hands…

If you’re out for a fun drive though, both will entertain but the Alfa has the mouth to match the trousers.

And the winner is…

The Alfa Romeo Stelvio Quadrifoglio. Not because it’s the better car – it’s deeply flawed – but because it’s more fun. It shows you that cars can be noisy, raucous, and make you grin like a lunatic in a pleasingly old school way. The Alfa is hard to recommend as anything other than a ‘heart’ car, the kind of car you buy not for resale value, but because you know you’ll love it while you have it…