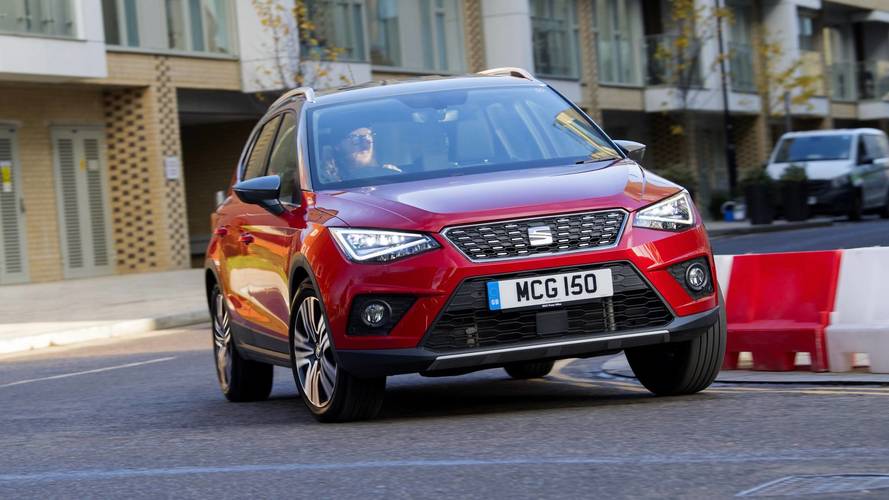 Seat are really giving its competitors a run for their money at the moment with a series of brilliant products. The Seat Ibiza is one of the best hatchbacks out there and it’s a similar story with the Ateca for SUVs. This is the Seat Arona, a compact SUV that’s fighting for class honours in arguably the most crowded segment.

Did you know? The Arona SUV is named after a municipality  on the Spanish island of Tenerife.

The Seat Arona is quite possibly the best compact SUV of the moment. Good practicality, economy and solid driving manners are all Arona staples.

It lacks the visual creativity of a Hyundai Kona or the customisation of a Citroen C3 Aircross, but its real-world strengths far outweigh having orange door mirrors. It’s a level-headed car for level-headed people.

Arona is good to drive, too, with a pleasing blend of comfort and agility. We still need to drive the diesel engines, but the 1.0-litre petrol is an impressive three cylinder offering. It’s a shame that the larger 1.5-litre EVO engine is restricted to FR trim — we have no idea why, it just seems silly.

These baby SUVs are all about being as fashionable as their full-sized counterparts, but the Arona is one of the more conservative designs in the class. Some people will value a subtle look, but others will wish it had a bit more personality.

It’s a clean, minimalist design with a few creases detailing the body. Seat’s family face is front and centre with its trapezoid grille and angular headlights making the transition.

You can customise your Seat Arona with a two-tone roof which makes it look much more distinctive, however, rivals such as the Citroen C3 Aircross and Kia Stonic offer more personalisation options. The colour palette does include a rather zingy orange shade, but lower trims are limited to more plane offerings.

The interior continues the grown-up theme, focusing on function more than form. Its dashboard features a few interesting contours, but the cabin design is generally bland when compared with rivals.

Fit and finish is good with everything having a durable feel, perfect for those with younger children. It’s just a shame that there are quite a few hard plastics that cheapen the cabin.

Front occupants are treated to some supportive seats with good levels of side bolstering. FR trim cars and up get some added Alcantara and Xcellence further improves practicality with under-seat storage.

It might not feature the latest Feng Shui inspired interior, but its brilliant ergonomics will relieve stress in a different way. Large door bins will happily consume life’s miscellanea and a big cubby below the centre console is ideal for mobile phones. In fact, so ideal that certain trim levels get wireless charging in said cubby. Switchgear is sensibly laid out, everything is within arm’s reach and thin A-pillars boost visibility. Our only gripe is that the large C-pillars do create a bit of a blindspot to the rear three-quarters.

The rear bench provides seating for three, although the centre seat is rather narrow and is hindered by a hump in the floor. Leg room in the back isn’t quite as spacious as a Citroen C3 Aircross, but headroom is plentiful.

Boot space is a Hyundai Kona-beating 400-litres and, while it might be smaller than that of a C3 Aircross, does feature a false floor to iron out the load lip. The rear seats fold flat 60:40 giving you just enough space for those runs to the tip.

Tech levels in even the most basic SE Arona are pretty good. DAB radio, air conditioning, cruise control phone connectivity and a 5.0-inch touchscreen are yours for nothing. That just about surpasses the generously equipped Hyundai Kona.

Move up to SE Technology and, as the name suggests, you’ll get more gadgets. An excellent 8.0-inch touchscreen display features navigation, Apple CarPlay and Android Auto. The screen itself is responsive and the software is easy to navigate making for a stress-free user experience. It’s defiantly one of better infotainment systems out there.

Higher trims get dual-zone air conditioning and the top tier Xcellence Lux can even park itself.

The Seat Arona is available with five engine options, although some can only be had with a particular trim level — yeah, we don’t understand why either.

The entry 1.0-litre three-cylinder with 94bhp is actually a great little engine. Around town it’s responsive and has just enough get-up-and go to facilitate most needs, although you do notice a dip in performance when the car is fully laden. If you’re willing to change down a gear before an overtake, it performs well on the motorway too, being surprisingly refined for an engine only available with a 5-speed manual.

If you need a bit more grunt, you can have the same 1.0-litre engine, but with 113bhp and a 7-speed automatic gearbox. The auto is brilliantly smooth when left alone, but also immediate when you summon a gear via the wheel-mounted paddle shifters.

A 94bhp 1.6-litre diesel opens the batting for oil burners and claims to return up to 70mpg. If you want the stronger, but slightly less efficient, 113bhp variant you’ll have to step-up to SE Technology Lux trim.

FR and FR Sport cars get exclusive use of the punchy 1.5-litre EVO engine with 148bhp. While this is great for those looking for their Arona to have sporty FR looks and suspension, it’s a shame that other trims don’t have access to what we’d imagine to be a popular engine choice.

Many of these SUVs put so much focus on style that there’s often a lack of substance beneath the eye-catching bodywork — this is not the case with Arona. Seat has put a lot of energy into the day-to-day driving manners of this car, making it one of the best compact SUVs in the class.

Our British roads are a patchwork quilt of surfaces stitched together with potholes and speed bumps. Thankfully the Arona takes these imperfections in its stride, providing good ride comfort. Refinement is further boosted if you go for the impressively hushed 1-litre engine option, however, wind noise does tend to build at higher speeds.

There’s a good balance between comfort and handling with the standard suspension also able to prevent the car from dramatically listing through bends. There’s still some body roll, but much less than found in a Citroen C3 Aircross or Honda HR-V. Arona FR Sport models get adaptive dampers than can be firmed up to lessen body roll further.

Hustle the Seat Arona and it feels much more agile than most SUVs. Well weighted steering and the car’s aforementioned composure gives you confidence in the way the Arona goes about its business.

In addition to a host of airbags (Seat doesn’t offer driver’s knee protection), standard safety kit includes Active Emergency Braking that works at up to 30mpg and detects pedestrians. It’s also got a tiredness alert and two pairs of Isofix points in the rear.

The Seat Arona doesn’t offer Lane Keeping Assist unlike the Hyundai Kona which has it as standard across the range.

Now that’s something you don’t see every day! Seat aren’t charging for paint on the Arona, that said, your choice of colour is somewhat restricted by the trim level you choose. Lower grade cars can have white, grey, black or red, each being offered with a contrasting roof. FR unlocks orange and a handsome shade of blue, while Xcellence grants you a strange shade of Magenta.

The Seat Arona is offered in seven different trim levels, some of which harbour exclusive engine options as well as the expected equipment. Getting the Arona you want might involve moving up or down the range.

It all starts with SE, which comes with much of the equipment you’ll want. 17-inch alloy wheels and LED taillights add to the design, as does the non-cost two-tone roof. A 5.0-inch touchscreen infotainment features DAB radio and Bluetooth, but no navigation. Cruise Control is fitted to every Arona.

SE Technology is our pick of the range as it starts from less than £18k and is very well equipped. Building on SE, it adds an excellent 8-inch touchscreen with Apple CarPlay and Android Auto, wireless phone charger, navigation, parking sensors and some added chrome.

FR cars gain access to the 1.5-litre EVO engine, so if this is the engine you’re after you’ll need FR or FR Sport. Full LED lights, a new alloy wheel design, more chrome, tinted rear glass, adjustable dampers, dual zone climate control, sportier seats and steering wheel come as part of the package. From this trim and up you can also get blue and orange paintwork.

Xcellence might be missing an “e” but it does have the option of magenta paint and comes with goodies including a centre armrest, keyless go and under seat storage.

Xcellence Lux delivers 18-inch alloy wheels, park assist and a rear view camera. It has all of the toys, but it’s pricey.

Seat provides five engines for the Arona, and assuming you’re flexible with trim levels, there should be something for everyone.

The 93bhp 1.6-litre diesel is the most efficient with a claimed 70mpg and low emissions of 105g/km CO2. The more powerful 113bhp version is only available on SE Technology Lux and up, but is slightly less efficient with 69mpg combined. Seat’s diesel offering matches the 70mpg of the Citroen C3 Aircross.

The most efficient petrol on paper is the 93bhp 1.0-litre with a claimed 57.6mpg despite only being a five speed, although we found that it’ll return closer to 40mpg in the real world. On lower trims the 113bhp version of this engine can only be had with a 7-speed automatic gearbox returning 56.5mpg. Go for an FR car and you can have it with a manual that’ll match the consumption of the 93bhp engine.

Exclusive to FR and FR Sport trim cars, the 1.5-litre EVO petrol engine only comes with a six-speed manual transmission and claims 55.4mpg.

Around town the 1.0-litre is going to be your best option, but if you do extensive motorway stints, the diesels will save you heading to the pumps as frequently. The Arona is cheap to insure too with the 1.0-litre in SE guise falling into group 8. FR Sport cars with a 1.5 EVO engines are the most costly sitting in group 18.

Seat sits inside the top 10 of a recent J.D. Power reliability survey, ahead of Citroen and Renault, but behind Hyundai and Peugeot.

Warranty cover from Seat is good with the first two year being unlimited mileage and third capped at 60,000. You can pay to extend the warranty up to four years (up to 75,000 miles) and five (up to 90,000 miles).

Fixed price servicing comes with roadside assistance for up to 15 years. It’s £169 for a minor service or £289 for a major, each inspection can be viewed via an online video pointing out any issues.

The Seat Arona is competitive on price amongst its rivals. £16.5k will get you into the Spanish SUV which is about that same entry price as a Hyundai Kona or Kia Stonic.

SE Technology represents the best value as for just £1k more than the entry car you get a lot of added kit. 7-inch touchscreen with Android Auto and Apple CarPlay, navigation, wireless phone charging and more. Higher trims such as Xcellence begin to give this small car a big price and so are harder to justify.

Annoyingly if you want a particular engine, such as a manual 113bhp 1.0-litre or 1.5-litre EVO unit, you have to go for one of the higher-spec trim levels.

When looking at finance, the Arona sits in the middle of the pack. An SE Technology car with a £2k deposit comes to around £225 a month. That’s cheaper than a Kia Stonic by about £30, but £35 more than a Hyundai Kona.