The V8-engined Aston Martin DB11 Volante is a joy to behold and a joy to drive, whether you're cruising to Monaco or terrorising rural Britain.

There is more than one car within the precise, elegant lines of the new Aston Martin DB11 Volante. One of them you definitely want on your side in a bar brawl, and the other you want representing you in the ensuing court visit. Before we dwell a bit more on the rather two-faced dynamic attitude of this big, V8-powered drop-top Aston Martin GT, here’s the rest of the stuff you need to know… 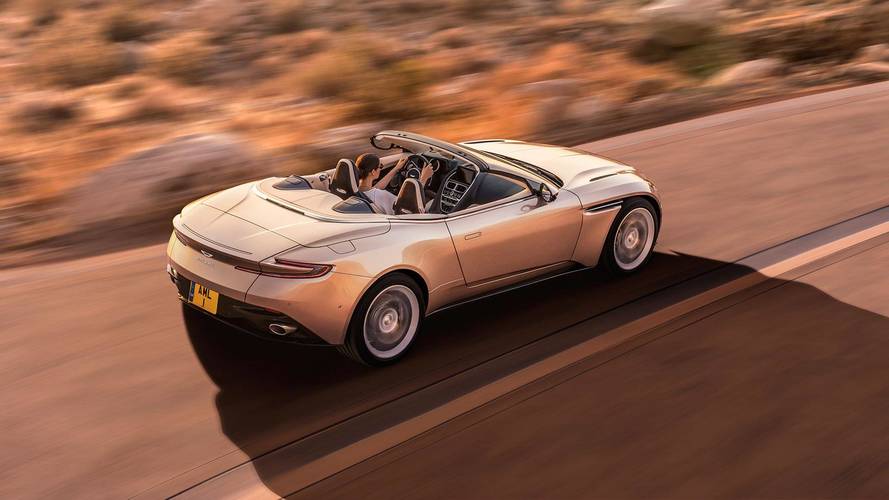 Well, just look at it. It’s beautiful. All low and wide and full of sophistication and sporting intent all at the same time. Maybe that strake running off the front wheelarch is a bit divisive, and the flatter rear deck of the soft-top DB11 doesn’t have quite the perfect swooping proportions of the coupe (which you can find out all about in our DB11 coupe video) but roof up or down the Volante is still an elegant yet purposeful roadster that looks as poster-worthy on a mucky, uninspiring country road as it does in a photographic studio. As our test drive proved...

The interior is similarly lustrous. Details such as seat backs that can be veneered in wood, the clamshell-like stitching design on the seat bases, the swooping, raised central spine that separates the driver from the passenger and makes you feel ensconced. This is a drastic improvement on Astons of a generation ago and speaks loudly of the improvements the brand has made in recent years.

It’s supremely comfortable up front, and quiet, too. Double-glazed glass and eight layers of roof fabric keep wind noise mostly at bay with the roof up, and while tyre noise was a bit more intrusive than you’d hope for on our test car, that's likely down to the Bridgestone winter tyres that were (quite wisely) fitted to the car. 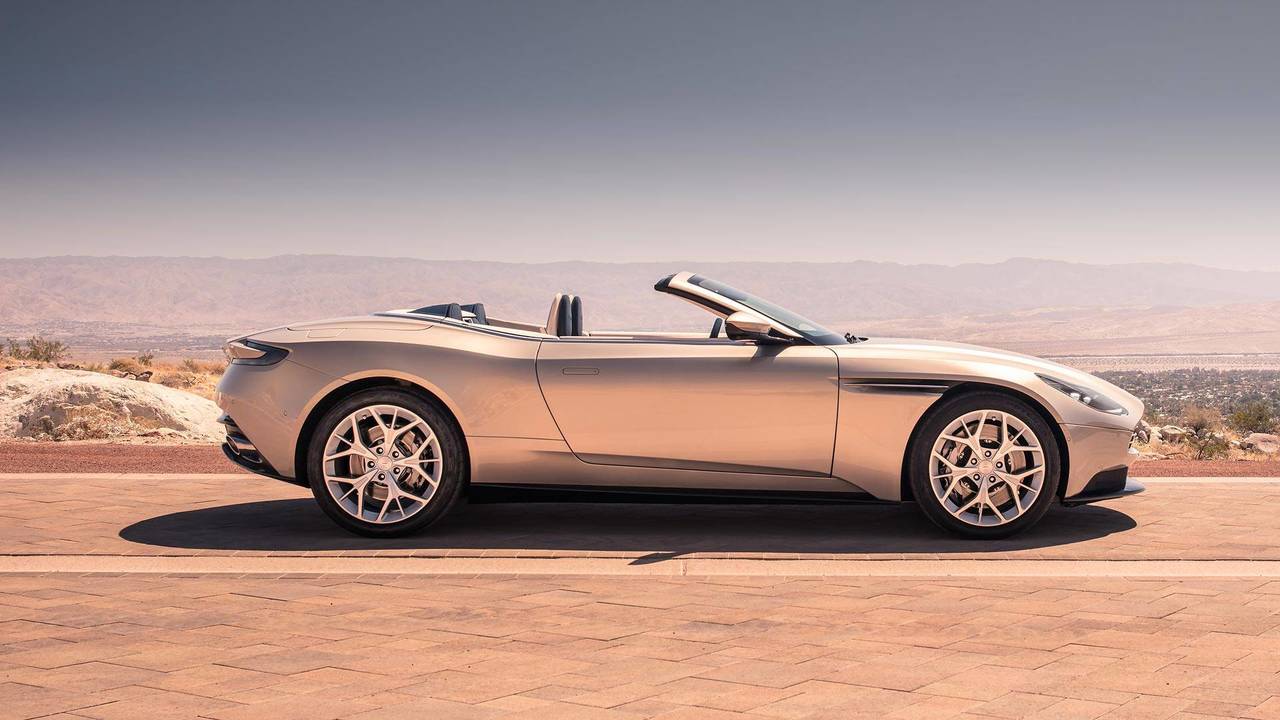 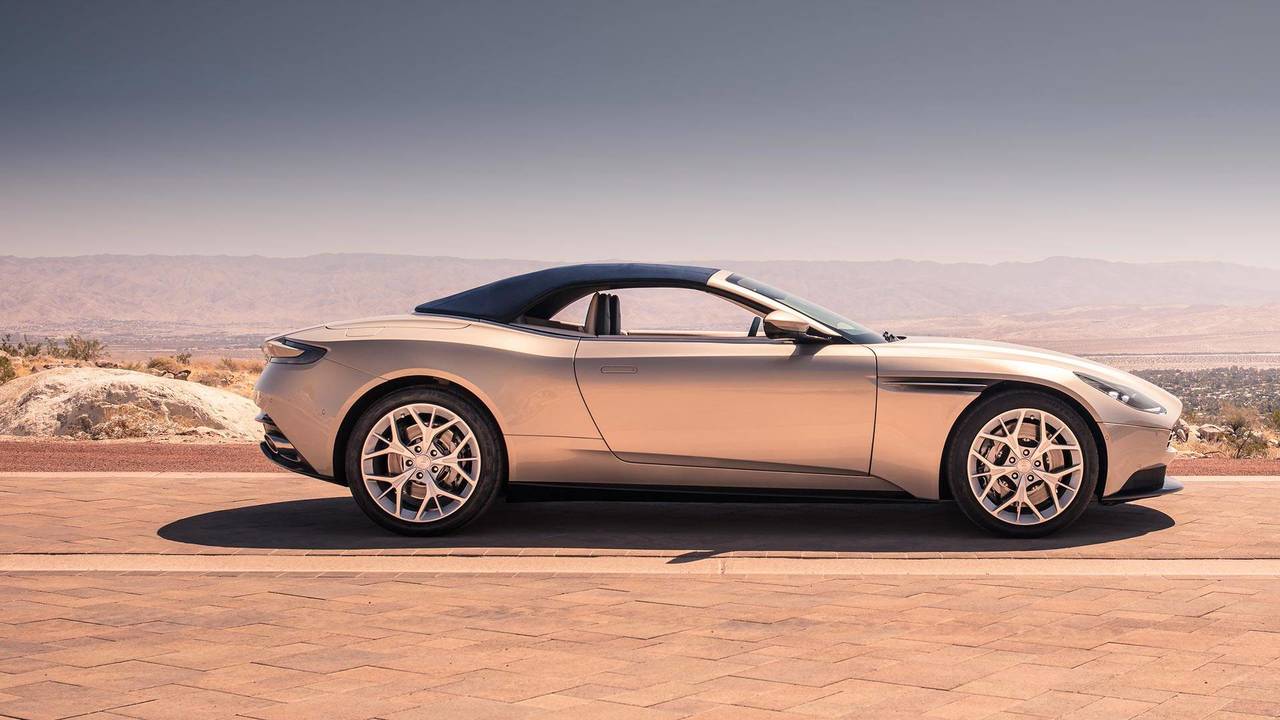 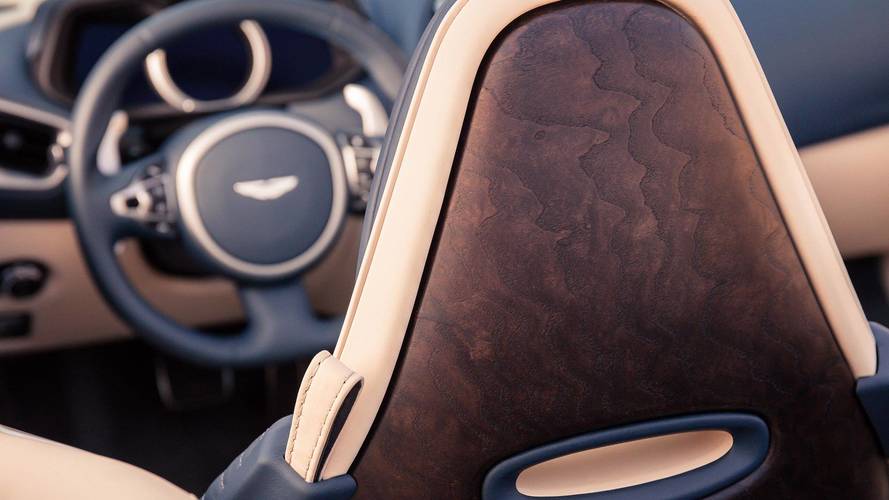 Wind buffeting is minimal with the roof down, too, so you’re barnet is unlikely to be overly ruffled even if you go alfresco on the motorway. What is annoying is that the rear wind diffuser is a manual affair that takes up space in the boot when it's not in use, and is a faff to install. Given that you’re still quite well protected even without it, we probably wouldn’t bother most of the time.

And you’re unlikely to care about the fairly woeful visibility because it’s an Aston, right? Plus, you do get front and rear parking sensors and a 360-degree camera as standard, the latter of which you view of course on the 8-inch central touchscreen.

Anyone familiar with Mercedes infotainment systems will recognise the interface here since it’s taken straight from the German brand. It’s not the most intuitive to use – some functions are quite well hidden in the layers of menus - but use the rotary controller or the touchscreen itself, and with a bit of time you can navigate the system quite easily. It does the job just fine and is leagues better than the ancient and almost unusable system that it replaces.

The boot is pretty pokey in the DB11 Volante - you lose some 64 litres over the coupe, at 206 litres - but there’s enough space for a set of golf clubs or a couple of well-stuffed weekend bags, so it’s likely to be more than practical enough, especially if you do count the occasional rear seats as overflow luggage space. And it’s nice that you don’t have to drop a luggage protector in the boot to retract the roof, which will happen in 14 seconds (or it’ll close in 16 seconds) at up to 31mph.

That depends on which mode you choose, but one thing’s for sure – the Aston DB11 rides wonderfully even on UK roads and that Mercedes AMG-sourced 4.0-litre twin-turbo V8 is a masterpiece. The DB11 Volante more than fills the fast, exotic GT criteria.

Adaptive dampers can be toggled through three settings via a button under your left thumb on the steering wheel, while drive modes – which tweak steering, throttle, exhaust and gearbox responses – are toggled with your right thumb. These can all be messed about with independently, which is great for us Brits, who have roads that often warrant a lairy powertrain and soft dampers. 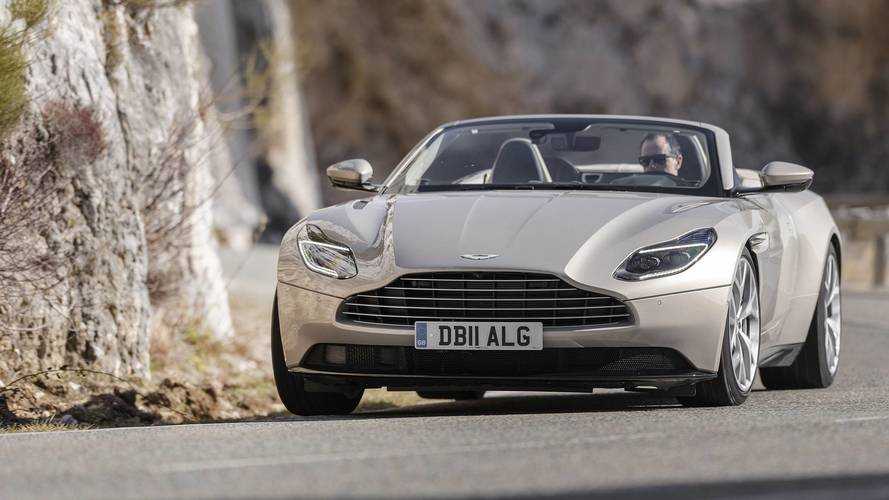 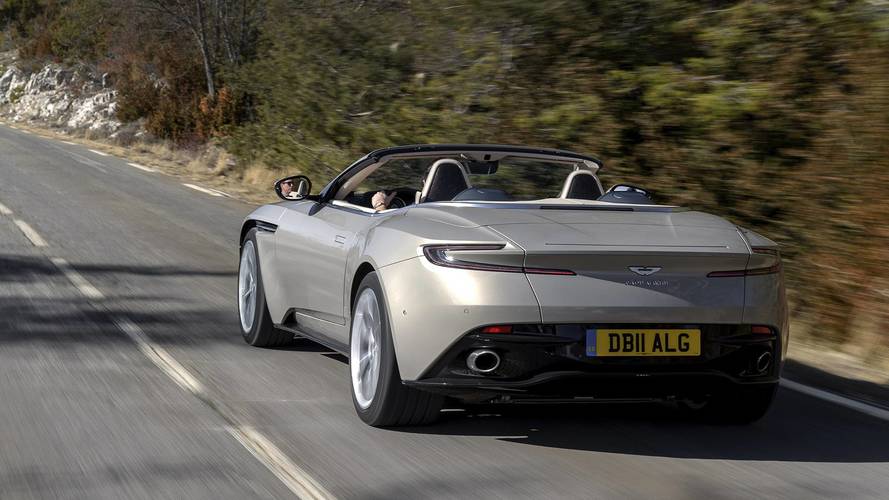 Leave it in GT mode and while the V8 is still pretty savage when you want it to be, fairly soft throttle response encourages swift but easy progress. With this mask on, the DB11 is a true sophisticate. It’ll ferry you to your weekend pad in overindulgent style, without making you sweat when you’re in a tight spot trying to wind it around an underground car park. The 8-speed automatic gearbox isn’t going to do anything unexpected and the throttle and steering are a doddle to judge, so you can tootle around looking glamorous, and enjoy the fact that the DB11 Volante is as easy to drive as any wide, car with fairly restrictive visibility can be.

Switch to Sport and the exhaust wakes up. Burble burble, mutter mutter... And lo – a properly shouty, angry V8 ruckus when you go for it, with heavier steering to help you swing the low-slung bulk of the DB11 around bends with grin-inducing gusto. Traction is really very good, although our car was on winter tyres and we were driving in snowy or very cold conditions. Even so, you can lean on the DB11 and you know exactly how much grip there is to play with. 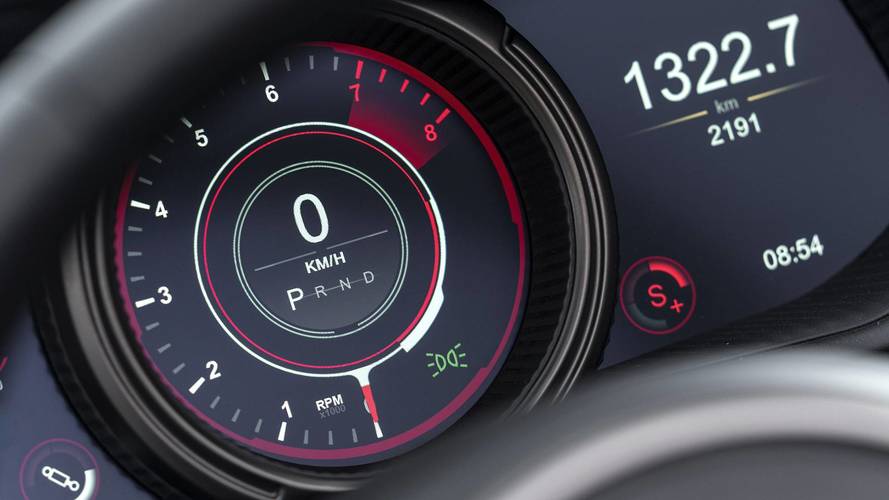 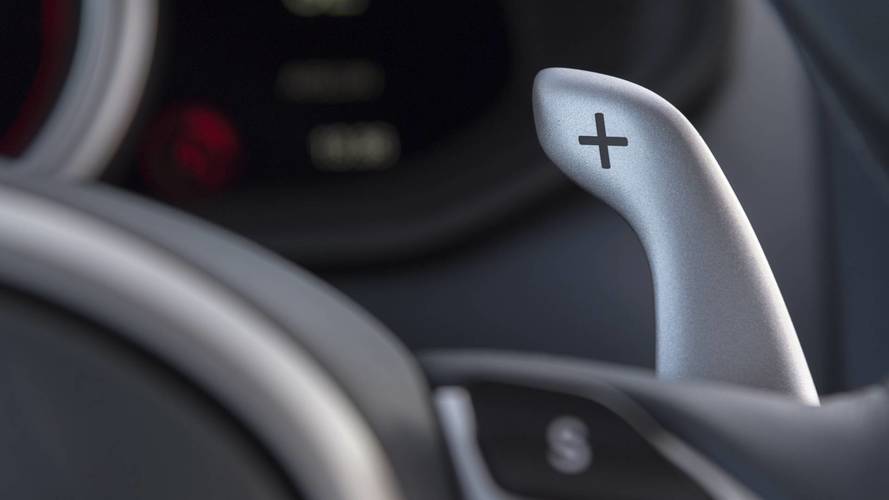 Flick to Sport Plus, and suddenly the exhaust sounds like it’s going to crawl out of the back of the car and eat you. It’s just awesome. Sod the burble, here’s a savage V8 muscle car in a Savile Row suit. Here are the ferocious crackles and shotgun overrun bangs that you’ll crave every time you drive the DB11 V8. It’s a barrage of noise and you will want to listen to it forever regardless of how antisocial that might seem. Wonderful as the venerable V12 is, the fact that the DB11 Volante is currently only available with the V8 should not bother you one iota. Not even for a moment.

Here, the DB11 also sharpens itself up handling wise, but ultimately this is always a car that feels more GT than sports car. On the road there’s a hint that, with a big track to play on, you could likely give it everything and find a level of handling balance and nuance that belies its size. After all, the steering is communicative and weighted well, and the front end of the big Aston is easy to place precisely. 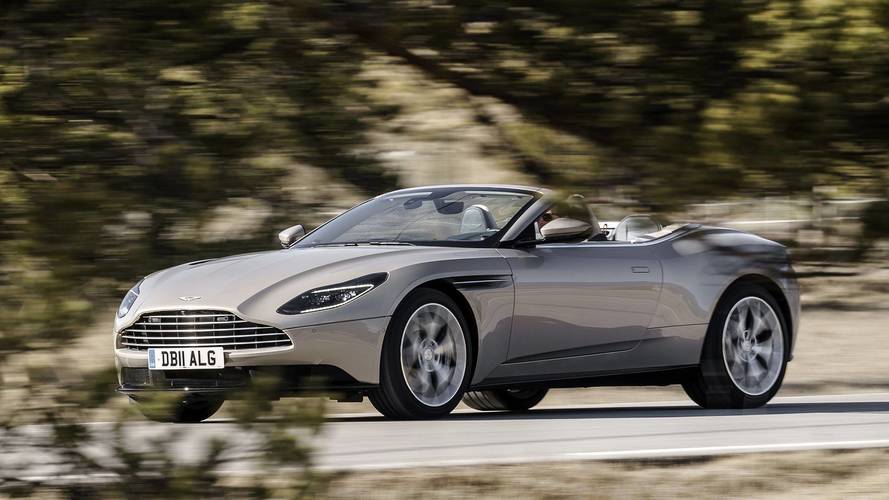 One compromise that soft-tops often make is in ride comfort, but that’s not the case here. The DB11 soaks up uneven and pitted surfaces with remarkable ease in either of its two softer settings, and keeps its weight firmly in check, too, so no ungainly lurching or rolling in hard cornering.

It’s only if you switch to the firmest of the three damper settings that ride comfort gets choppy. Body flex is barely perceptible, so while you’re conscious of the size and weight of this car – it comes in at 1870kg and is nearly 2.0-metres wide across those rear haunches - you won’t be subject to that weird wobbly, shuddering sensation that some limp-bodied convertibles suffer from as the car’s roofless frame twists through lack of rigidity.

Hell, yes. Sure, competition from the likes of the Ferrari Portofino is very strong, but the conversion to the sky’s-the-limit Volante spec is a truly great one in the Aston Martin DB11.

After all, while it’s easy for purists to sneer at convertible versions of such rarefied, sporting exotica as this - “oh, it’s heavier, scuttle shake, etc etc” – honestly, for a lavish sporting GT like the DB11, the roof-down experience enhances all of the stuff that you buy it for. The looks, that raucous exhaust note, and the attention that you probably enjoy given your overtly attention-seeking choice of car. It’s everything the DB11 is (and that’s a very, very good thing) only being able to put the roof down is like experiencing it in high def.

In short, if you want an Aston Martin DB11, you want to enjoy life. And that’s even easier to do with the roof down.