It might fall short of the veiled muscle car appeal of the Stinger GT S, but the 2.0-litre petrol Stinger is still great to drive, radical to look at and usefully cheaper to buy and run

We already know that the Kia Stinger is a seriously cool thing, since we’ve driven the very indulgent, fun and Maserati-esque V6 GT S model. However, it’s quite reasonable that you might be well up for the idea of a Kia Quattroporte, but not so much the running costs of the big V6 motor.

Welcome to the happy-medium Kia Stinger; a 244bhp 2.0-litre turbocharged petrol model that’s ideal for those who don’t want the obvious economy option of the 2.2-litre diesel model, but who also don’t want to foot the costs of the V6 GT S. Sure, the 2.0 T-GDi is hardly an economy champ with an official combined economy figure of 35.8mpg, but it’s still usefully more frugal than the GT S and at £32k it’s also some £8,500 cheaper. 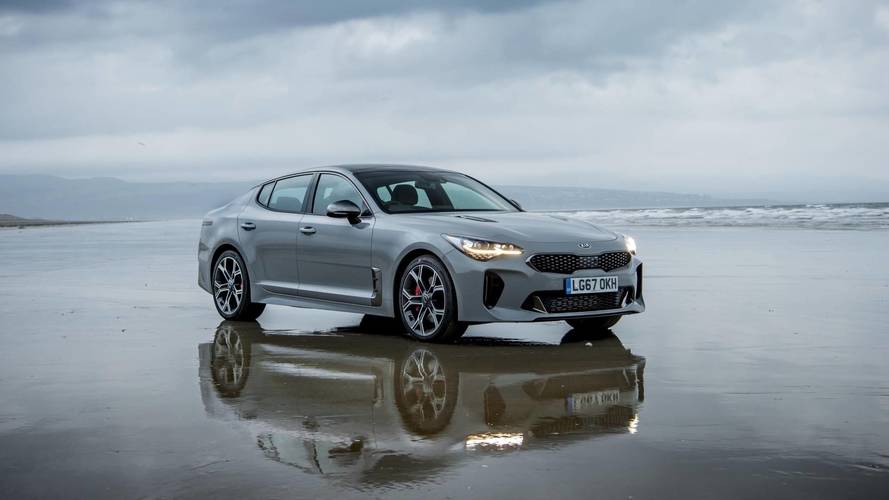 This 2.0 T-GDI version of the Stinger is available in two trims – GT Line or GT Line S. GT Line still gets most of the goodies, including climate control, leatherette upholstery, front and rear parking sensors, head-up display, electrically adjusted and heated front seats, and an 8-inch touchscreen with reversing camera, DAB, Bluetooth, Apple CarPlay and Android Auto. It's the option to go for if you do want to keep your purchase costs or monthly payments as low as possible, and it still feels pretty indulgent by any standard. 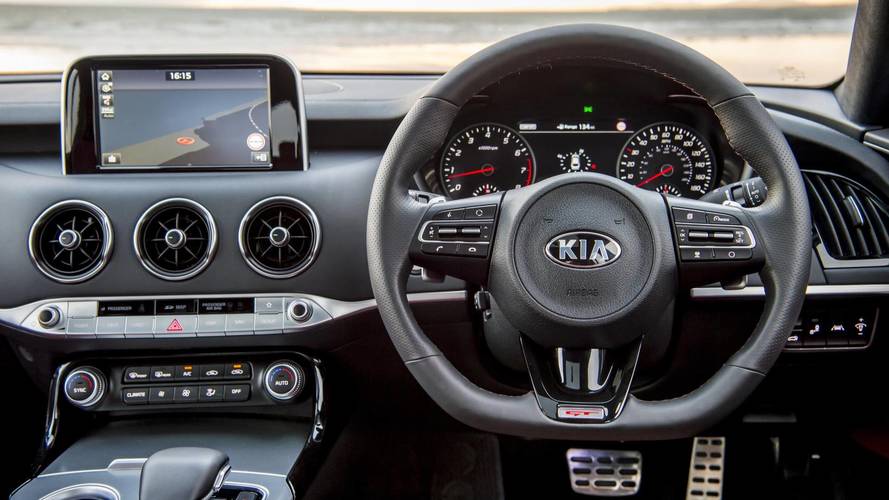 No matter which trim level you’re getting, you get 18-inch alloys, quad exhausts, dark chrome contrasting bits and all of the refreshingly original, striking Stinger style goodness. Mind you, the only standard colour is bright yellow, so factor in another £645 for one of the metallic shades – for your sake, our sake and the sake of your car’s residual values. 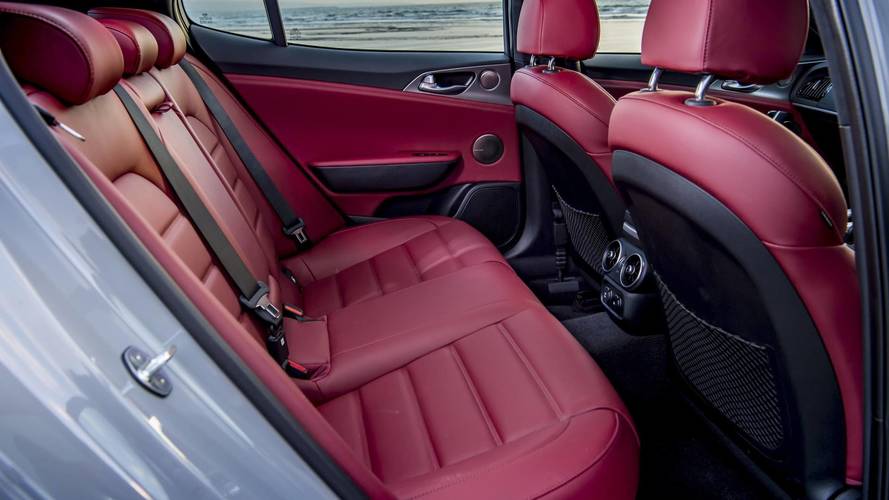 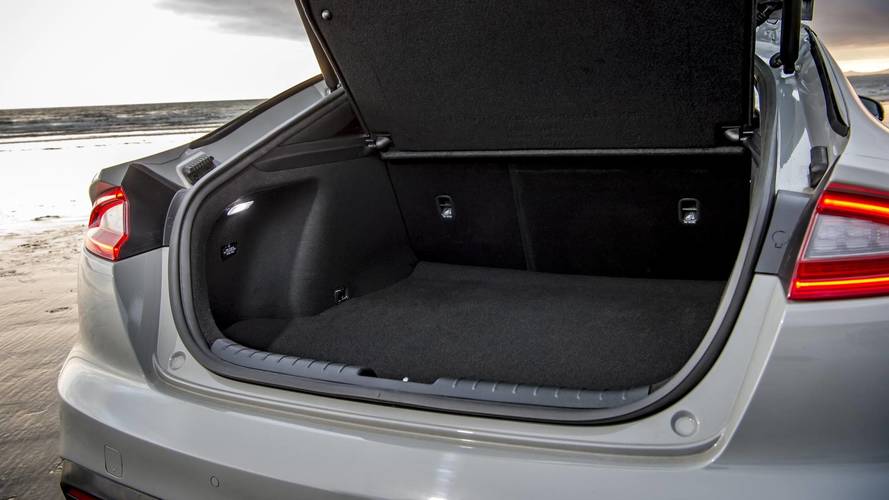 Inevitably you do lose something of the Stinger GT S'  restrained muscle car character in this 2.0-litre model, but the engine doesn’t disappoint despite that. Complete with an eight-speed automatic as standard, it’s potent enough to scare your average hot hatch or dispatch with a casual overtake, yet is also refined and well-suited to the Stinger’s brand of executive bravado. It gets a bit harsh if you really rev it out, but surf around on the hearty mid-range torque, and you can make seriously rapid progress without ruffling the Kia’s slick, laid-back manners. There's fun to be had in paddling your way through the gears if you want a bit more control, too, as the gearbox is pretty sharp to respond. It doesn't hold Manual mode for long before it defaults back to Auto, even if you've twisted the drive mode switch into Sport. 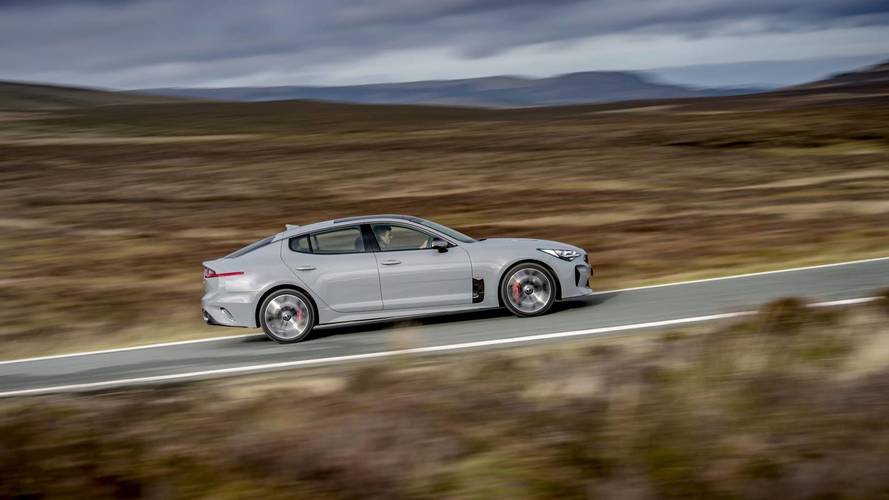 Ultimately the GT S feels like a well-manicured hooligan in the way it drives, where the 2.0-litre feels a notch or two closer to a conventional and less exotic executive saloon; you’re not quite so tempted take it by the scruff and really wring it out, and it's not quite as fun if you do. But between the strong performance and the calm but slick and engaging handling, and well-sorted ride comfort, this remains a properly well-resolved and good value big GT, even when stacked up against rivals like an Audi A5 Sportback and the BMW 4 Series Gran Coupe. 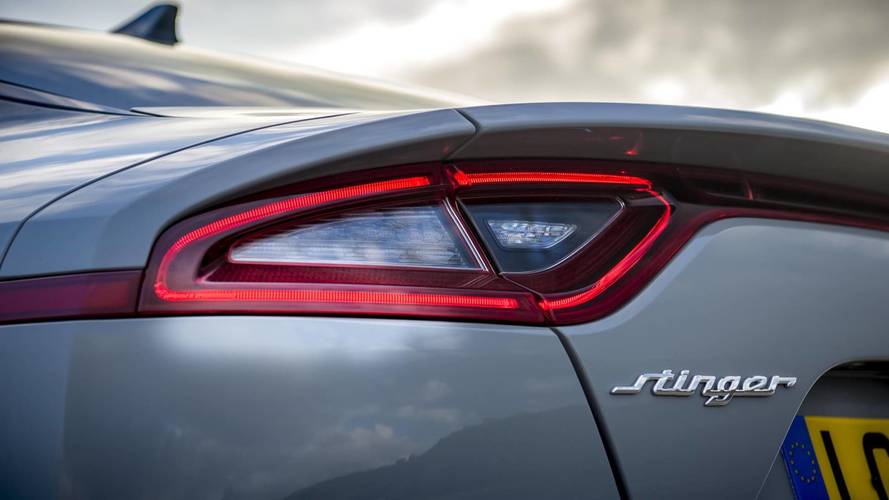 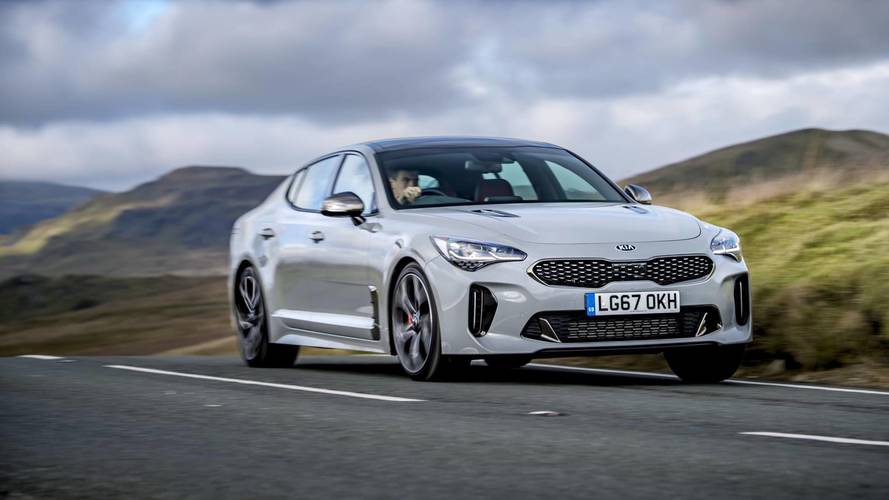 Yes, why the hell not? You’re not going to get one of the aforementioned German rivals with this level of equipment at the same price, although do check out your finance options carefully as you can get versions of the BMW 4 Series Gran Coupe and Audi A5 Sportback for similar PCP finance payments; put £5000 down on a Stinger 2.0 T-GDi GT Line, and you'll pay around £480 per month, which will easily get you a moderately well equipped Audi or BMW. Kia would do well to offer slightly more competitive monthly finance PCP deals to match the sort of value that the brochure price represents if you're looking for a high-spec executive four-door coupe.

Regardless, the Stinger is still good value given its equipment and performance and - crucially in this class of car – you don’t feel like you’re driving a budget option, even if you do go for the cheapest GT Line trim. It’s a great looking car that lives up to the promise of the bold exterior, even with this fiery-enough engine.