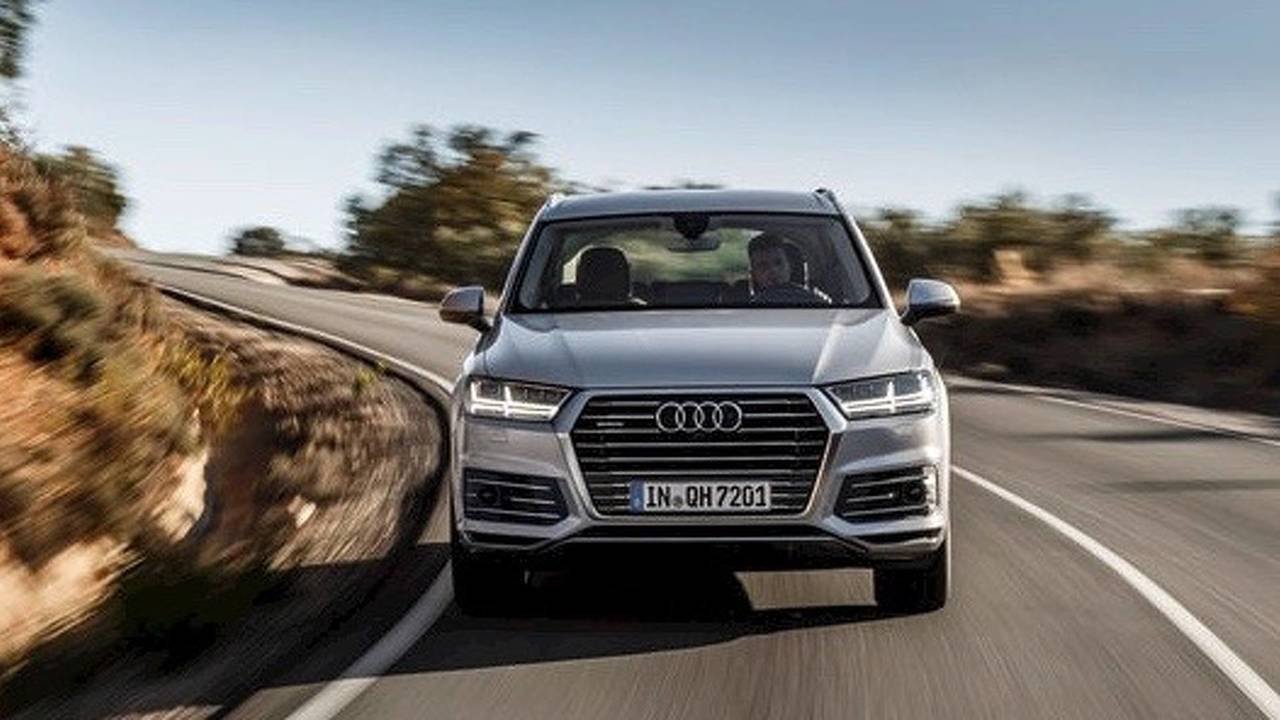 In the olden days buying a ‘green’ car meant huge compromises. The Q7 e-tron keeps the ‘green’ without losing any of the ‘car’.

It took Audi an inordinately long time to bring a big SUV into the world, especially considering it kinda owned the whole ‘four-wheel drive’ thing for regular cars. When it did the result was a bit ugly, all told, but it was a solid car. The second generation Q7 is far more angular, striking, and good looking. And better to drive.

You can get a Q7 in all sorts of flavours as well – petrol, diesel, fast, slow; you name it. There’s a plug-in hybrid one, too. It’s called the e-tron, and it’s about as plush as you can get for an eco car. It's also the only diesel option in the plug-in hybrid SUV set; the rest, like the Volvo XC90 T8 and forthcoming Range Rover P400e hybrid, are petrol and electric.

A grey leather interior does little to rouse the soul, and our test car was covered in acres of the stuff. Luckily, it was wrapped around an Audi interior so it wasn’t in any way, shape, or form ugly. Audi’s interiors are always measured affairs – where Mercedes’ efforts can look a bit like an overdesigned kitchen and BMW’s are smart and functional, Audi’s aren’t overly obtrusive. They're just… pretty. The Q7’s cabin isn’t over encumbered with buttons, with plenty of heavy lifting done by the car’s MMI infotainment controlling dial and the rest being controlled by subtly placed banks of physical switches (something that’s becoming a rarity these days). For perceived interior fit-and-finish, and ease of use, the Q7 is top of the pile at the moment.

There are two screens providing you with information; an easily readable unit on the centre console deals with music, phone and nav, while Audi’s Virtual Cockpit - the fully digital display in the driver's cockpit - shows speed, nav, trip computer info… anything a driver would feasibly need. They’re easy, intuitive and won’t cause you to drop f-bombs all over the show.

When it comes to storage there’s masses of space in the boot, with 650-litres with the seats up and 1835 with them down, but critically in the e-tron you don't get the sixth and seventh seats hidden in the boot floor, as you do with the rest of the Q7 range. There are batteries under there instead, so this is strictly a five-seat SUV only. Plus, it's a pain that there's nowhere neat to stow the charging cable, which is just a chunky case strapped to the side of the boot space.

Rear passengers will find plenty of room to sit comfortably as will those up front, and there's loads of space around the cabin to put things like wallets, keys, and phones in the centre console and deep door bins. The Q7 may be over five metres long, and seat only five (unlike the XC90 T8, which gets seven seats), but it is seriously spacious.

Remember its size? You won’t forget it after trying to navigate anything remotely small. This is a tank that feels its size on the UK’s narrow side streets and tight car parks. That said, slow manoeuvres are where you notice the e-tron’s party piece: its electric drivetrain. On start up there’s an eerie silence to accompany the various screens lighting up the cockpit. You expect a gentle diesel thrum, but the rev counter remains at zero. Gently prodding the throttle sees you glide silently along. It’s smooth, quiet, and wonderfully dissonant for a giant SUV. You can drive, officially, up to 35 miles without bothering the diesel motor assuming you’ve a full battery on board. That’s less than most commutes, which means if you’re diligent with your charging you needn't use any fuel at all other than on longer journeys.

Official government figures suggest that the e-tron is capable of 157mpg and 48g/km are possible. Let's just accept that those figures are mostly fantasy. The e-tron is a heavy car weighing in at nearly two and a half tonnes, a fair chunk of which is the electric powertrain bits. The rest is pure Q7. However, its diesel/EV set up is good for 369bhp and 516lb ft, enough to punt it from 0-62mph in 6.2 seconds and on to 143mph. Its weight, however, hides the performance. For something with so much torque you’d expect it to pull hard and push you back in your seat. It doesn’t all that much, though the car does pitch upwards under heavy load thanks to its hefty weight being transferred.

There are a few driving modes to play with – the usual stuff is all present and correct – but the car’s Eco mode is the one worth sticking with. It doesn’t numb the car in any huge way, and makes the most of the car’s complicated drivetrain.

A sports car it is not, so hurling it into corners isn’t advised as the lean will be mildly perturbing, but it’s a giggle to pop your boot down every now and then. For the most part, though, you’ll be perfectly happy to cruise around in the Q7’s wonderfully quiet cabin.

Your eco power is delivered via an eight-speed automatic gearbox that’s as silent and smooth as you like, so there’s no need to worry about jerky gear changes. Its brakes can be a bit grabby at low speeds while the car decides whether it’s using them only to stop the car rather than siphon some electricity off them, but otherwise they’re smooth and progressive – though under heavy braking you feel the Q7’s heft rather keenly. Our test car rode smoothly, taking in nasty lumps and bumps in its stride.

Going green is in, as it should be, and with the Q7 e-tron you can do so without losing any actual car usefulness in the process. It’s quick enough for most, it’s comfortable, spacious, and quiet, it looks pretty fine on the road, and it's competitive on price with the Volvo.

It will also be usefully more economical with its diesel engine running than the Volvo XC90 T8 or any of the petrol plug-in hybrid rivals will be when the battery charge is out, so if you you're going to regularly do bigger journeys in your plug-in hybrid and don't want to be looking at a very un-green 20-something mpg economy when you do, the Audi is the best bet. Provided you don't want seven seats, of course.