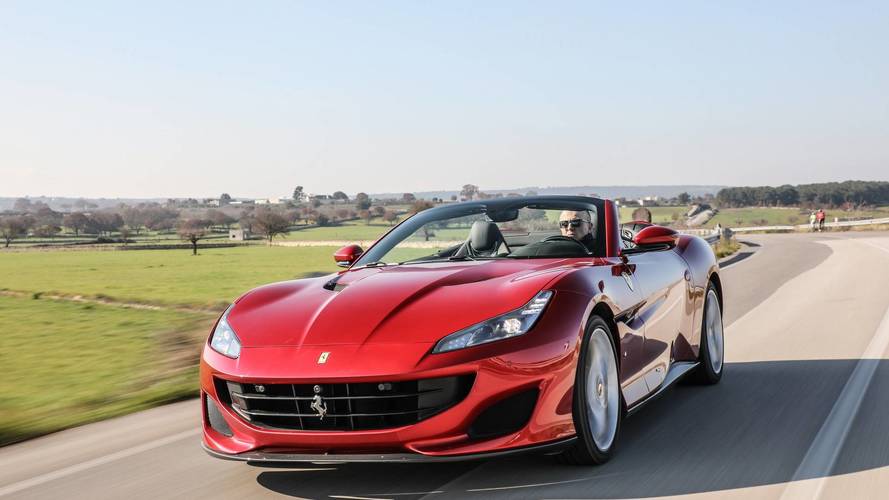 Picking up the baton from the best-selling Ferrari of all time could easily intimidate. Not so with the new Ferrari Portofino which, with elegant but decisive and distinctly different styling, distances itself from its predecessor - the California. Even the new model name suggests that this is a different prospect to the California, which had a reputation for being the 'soft' Ferrari.

Mind you, the Portofino does keep the folding hard-top roof that characterised the California and this remains the cheapest way into a Ferrari, at a touch over £166k, and unashamedly the least focussed car in the Italian maker's rarefied range.

14 seconds. That's all it takes for the Portofino to turn from a sporty and proportionate coupé into a sleek and sinuous spider, and you can make the transformation at up to 30mph. Its shape has been carved out by the Ferrari Design Centre which, thanks to Flavio Manzoni's intuition and talent, has made the Portofino a refined, generally more intense design.

Between the much more aggressive-looking, L-shaped full-LED front headlights - which now have an air intake that funnels air into the wheelarches for optimum aerodynamics - and a rear end that has hints of the Ferrari 488 to it, this is a dramatically more purposeful-looking car than the soft-edged Ferrari California.

The revolution continues inside where there are four screens: two TFTs in the instrument panel, adjustable with the appropriate buttons behind the steering wheel, while the full HD 10.25-inch touchscreen comes with and 3D graphics, although the real must is now the full HD 8.8 inch touchscreen dedicated to the passenger.

The latest generation steering wheel, with its almost rectangular design, incorporates all the possible functions from control of the sat-nav, to the rear window wiper to the indicators, but the real revolution concerns the front seats: they are much lighter and more broadly adjustable, but above everything they're super thin so as to offer an extra 5cm of legroom for rear passengers. Even so, the two small rear seats are still best reserved for children only, and even then not for a long journey.

The electrically-extended wind deflector is standard fit, and reduces airflow into the passenger compartment by 30 percent over the California (according to Ferrari), making the Portofino easy to live with, even with the roof down.

The 90-degree, 3.9-litre twin-turbo V8 has gone up by some 40bhp, now reaching 591bhp at 7,500 rpm, with torque stopping at 560lb ft from 3,000- to 5,250rpm. Modifications to the engine have been extensive, too. There are new pistons and connecting rods, an optimised induction and exhaust system, and turbocharger with Variable Boost Management. This translates into a top speed of over 199mph for the Ferrari Portofino, while 0-62mph takes 3.5 seconds.

The third-generation electronic rear differential (E-Diff3) integrated with the 'F1-Trac' traction control has also been fitted to improve grip and handling in the Portofino. This, in conjunction with the electrically-assisted steering is intended to ensure a more direct response. And do you want to know what? It works.

In our short test on the streets around Alberobello, the mix of sun and rain didn't stop us from appreciating a new personality for this convertible Ferrari that - as with the looks - is quite different to the California.

The car's rigidity has been increased by 35 percent and the weight decreased by about 80kg, which helps the car to feel more precise on turn-in, and composed as you follow your line through the bend. Even when you go for faster-paced driving in tight corners, that slight understeer that you could feel in the California is much harder to find in the grippier, sharper Portofino.

With the manettino in Comfort the Portofino doesn't allow any loss of traction, and almost anticipates the driver's potential mistakes, while it remains more permissive in Sport: here it's the driver who has to trust the electronics and provoke some oversteer with some enthusiastic prodding of the throttle. Turn to ESC OFF mode, and you really want to be on track to find out what the Portofino can do.

And the sound? A beautiful symphony, but far from the screams of the V8 of a few years ago; it is not a matter of turbocharger, apparently, but a deliberate act on the part of Ferrari technicians who want to make the Portofino a GT more than a sports car.

At £166,180 before you've even delved into the inevitably expensive and extensive Ferrari options list, you need to be fairly certain that it's the luxo-super-sports-gt-convertible for you. And if you're after the ultimate blend of exotic but easy-going GT with a sports car kick to it, it's hard to argue with the rather beautiful Ferrari Portofino. We'll have to get it on UK roads and up against rivals like the Bentley Continental GT and Aston Martin DB11 V8 Volante before we can say for sure if the Portofino is the best of its breed.