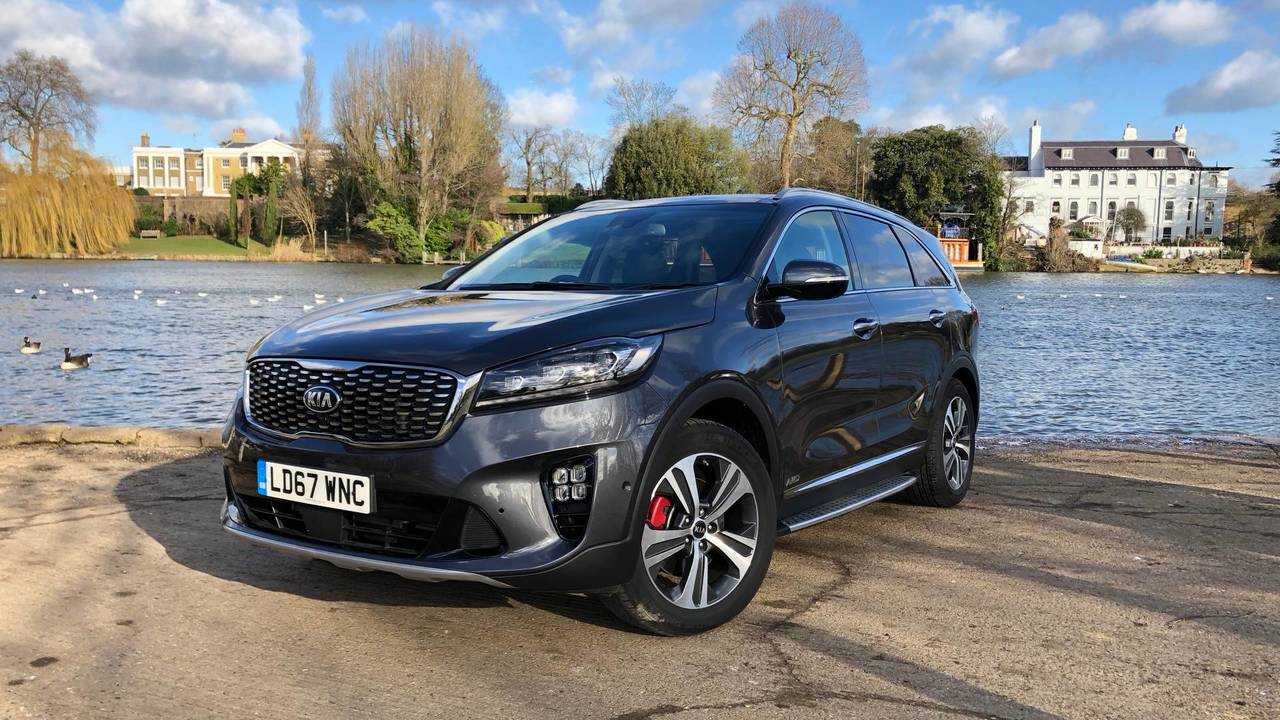 There used to be nothing stylish about owning a seven-seater; boxy people-carriers were always a necessity and not a choice. However, the SUV revolution has seen many seven-seaters transform into far more appealing products, and the Kia Sorento certainly seems to be one of them, with versatility, space and good value all wrapped up in proper, big off-roader kudos. The Sorento is also already established as a solid option in the big SUV class with the much-liked predecessors, but can it take on the likes of new pretenders to the affordable seven-seat SUV throne, notably the Skoda Kodiaq?

There’s no getting away from the Sorento’s size, but Kia designers have made good use of the real estate. The signature ‘Tiger Nose’ grille is broad and flanked by a set of raked headlights, and our top-spec GT-Line S also features sportier body work, 19-inch alloy wheels, chromed exhausts and those funky ice-cube style daytime running lights.

Jump into the spacious cabin and you’ll find Kia’s latest 8-inch infotainment system that now supports Apple CarPlay and Android Auto. It’s responsive and easy to use, although the graphics do look a bit outdated when compared to rivals.

GT-Line S cars also get the luxury of 10-way adjustable heated and cooled leather seats, which are supportive in all the right places thanks to electric lumbar support. The middle row provides plenty of space, even for three adults thanks to good head room and a flat floor. The rearmost seats offer generous space - maybe not quite enough for an adult on a long journey, but more than rivals such as the Skoda Kodiaq. Even in full seven-seat mode there’s enough space in the boot for a couple of weekend bags, but fold the back row flat and you’ll have an enormous 605-litres of space at your disposal. There’s also a few cubbyholes in the back as well as some underfloor storage.

The Sorento is four-wheel drive only (unlike many rivals that offer front- or four-wheel drive) and the only engine option is a 2.2-litre diesel engine that gives it 197bhp and 441lb ft of torque. It’s a strong engine with plenty of pulling power once you get past the initial turbo lag. However, under load this unit is quite vocal and emits that classic diesel grumble until you reach cruising speed.

New for this facelift model is an 8-speed automatic gearbox that’s smooth and blurss changes nicely. It can be hesitant when changing gear via the wheel-mounted paddles, but we doubt many Sorento owners will be attempting to imitate Lewis Hamilton on the school run.

Speaking of dropping the kids to school, light steering and a 360-degree camera found on this trim makes parking easy, and despite its size the Kia never feels cumbersome or taxing to drive. Rear parking sensors are standard across the range, as is the camera in all but the base model.

On the more dynamic stuff this sizeable SUV tends to lean through the bends like you’d expect it to, but that’s the price for its cushioning ride. There’s plenty of grip, though, thanks to that standard all-wheel drive and the added traction will also prove handy if you venture off the beaten track. It’s no Land Rover, but respectable ground clearance and hill descent control means that it has some off-roading credentials. If you’re planning on towing a trailer it’s worth noting that a manual Sorento can lug 500kg more than the 2,000kg if the automatic.

Kia claims that this Sorento GT-Line S will return over 43mpg combined. That’s in the same ballpark as the equivalent Skoda Kodiaq, but not as good as the Peugeot 5008 — although the Peugeot is front-wheel drive only. It’s emissions where the Kia is thoroughly beaten; its 170g/km CO2 is way above the figures you’d get in the Kodiaq, which only serves to highlight the lack of a more efficient diesel or petrol option in this one-engine lineup.

The Kia Sorento is one of the most spacious cars in its class, providing a vast boot and seven usable seats. For those who need such versatility, this Kia is likely a far more desirable choice than an MPV such as the Ford Galaxy.

This car’s biggest hurdle after its limited and rather inefficient engine, is price. Our test car came to £41,995 which is a lot when you consider an equivalent Peugeot 5008 is under £38k. A top spec Kodiaq is under £37,000, but then it lacks the standard equipment of the Kia.

A lower-priced, but still well-equipped trim such as KX-2 – which comes in at £32,695 or  - would make more sense in terms of value for money, and of course Kia’s industry leading 7 year warranty is something nobody can argue with. However, a KX-2 on PCP with a £3k deposit is £480 a month, that’s only £10 cheaper than a Land Rover Discovery Sport! With just one engine on offer and with prices looking pretty peaky, the Sorento’s on the back foot against more rounded rivals like the Skoda.