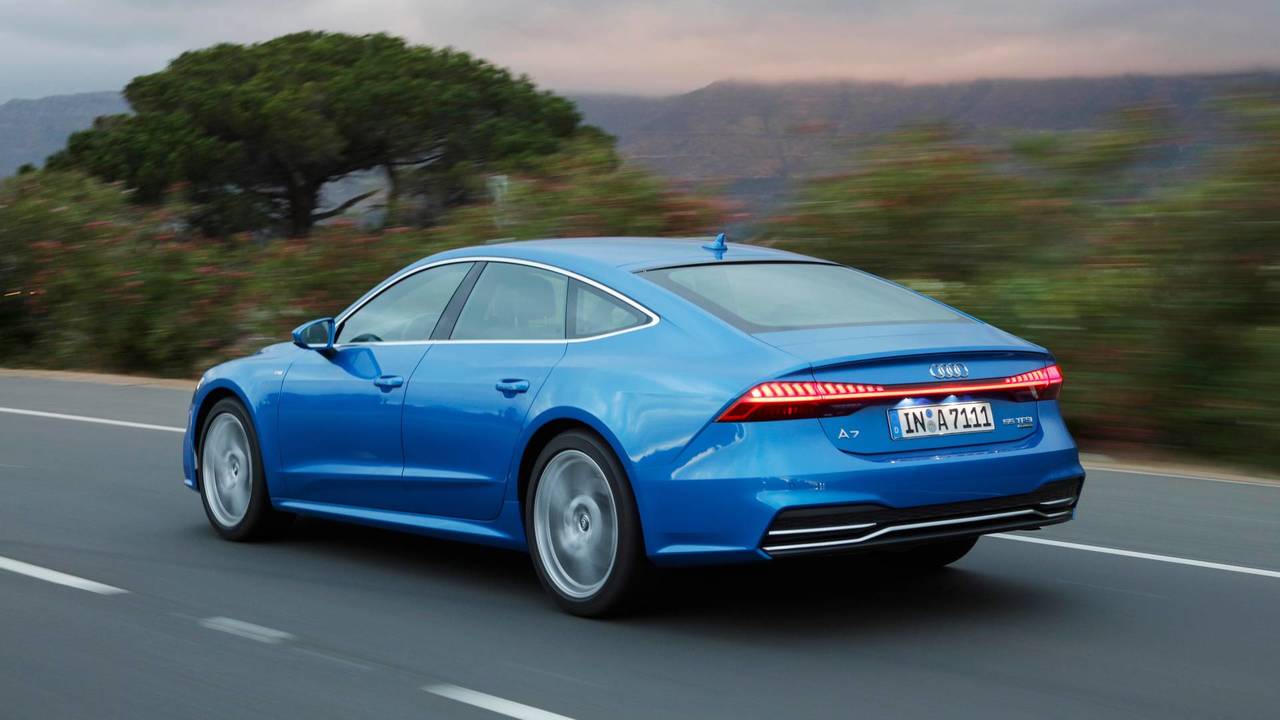 Audi’s A7 is all about having the right look and feel, but not about keeping you too busy behind the wheel. It looks great and you’ll look great in it, but it’s not going to blow you away.

A new A7 means a new take on looking good and being comfortable while doing it. The latest model offers fresh looks, a new take on Audi’s MMI infotainment interface, and some seriously flashy light graphics. Will that be enough to woo buyers from other (most likely German) cars?

Audi’s answer to the BMW 6 Series and Mercedes-Benz CLS, the A7, added some style-forward luxocoupé-ery to a small, but hotly contested segment when it launched back in the days before diesel was a dirty word. While it had all the familiar Audi design cues, its hatchback rear end sloped dramatically downward creating either a slightly more practical saloon or a slightly less practical estate. Whatever your thoughts on that are, it was a pretty thing.

Looking good is important to some people – they want to be seen to have the best taste, the shiniest toys, and the best life, but it has to fit in with their actual life. That’s what the 2018 A7 is all about: looking good, but fitting around your life. It looks good from pretty much every angle (bar the rear three-quarter, which just looks… odd) so long as you keep its spoiler retracted, that is. It’s the kind of car you see on the road and appreciate for its crispness, smartness, and general… sleekness. It’s the kind of design that will stay fresh for a long time, kinda like an old Bang & Olufsen stereo or a Polaroid camera. You see it and instantly know its purpose - and you can check it out in a variety of different colours in the below gallery.

Inside, the general sleekery continues. A number of materials are available to clad your interior – metal, wood and the like can sit cleanly on every surface. Wide, flat expanses give it an open feel, though if you go too shiny you could stray in to ‘looks like a designer kitchen’ territory. Though I’d argue if your designer kitchen has as many digital screens as the A7 does you might be overdoing it a touch.

If you like buttons in your cars you’ll dislike the A7. The new MMI interface does away with them, instead going for a pair of touch screens in the centre stack - first seen in the Audi A8. The top, 10.1-inch, screen does the job of navigation, infotainment, phone and the like. The lower, 8.6-inch, screen does the heaters, pops the spoiler up, and many other things. As there’s not a dial to choose your interactive poison you have to use your fingers – something that could be dreadful, but mercifully isn’t. The Range Rover Velar’s dual touch screens serve largely the same functions, but when you press a section to do whatever it is you want it to do you get no feedback from it, meaning you have to either prod and pray or look at the panel to see if you’ve done what you wanted to do. This is not the case in the A7, as it comes with haptic feedback – a little vibration from the screen to let you know you’ve done a thing, much in the same way an iPhone 7’s home key feels like an actual button even though it’s flat. Smart, simple stuff.

The screens are quick to respond and easy to use, making them sensible as well as functional. The huge advantage of mapping many functions to a screen is that manufacturers don’t need to fill the cabin with buttons assigned to specific tasks, and more importantly for some it means they don’t have to put blank ‘LOOK AT HOW CHEAP THIS GUY IS’ panels over spaces reserved for unticked option boxes. Conversely, it does mean that something that would normally be a press away may be a few screens away instead.

At launch there are two engine choices; a 50 TDI (a 3.0-litre V6 diesel) and a 55 TFSI (a 3.0-litre V6 petrol). The petrol engine is silky smooth and whisper quiet at speed. In fact, when you decide to give the throttle a hefty poke the lack of engine noise is slightly bizarre. You can barely hear the 335bhp, 369lb ft V6 do its thing. That isn’t an accident though, Audi’s engineers wanted the A7 to be an effortless cruiser so noise dampening, acoustic skulduggery, and double glazing help to keep as many aural annoyances out as possible.

If going fast very quietly is your thing, you’ll enjoy the fun numbers: 0-62mph takes 5.3 seconds and it’ll do a limited 155mph. You may not be able to hear the motor, but you can feel it when you pin the gas pedal to the floor. In gear acceleration is linear and smooth, as well – the engine and gearbox combo offers seemingly no flat spots.

To help the handling there are four varieties of suspension on offer, the most advanced (and optional) air suspension was fitted to our test car and it held up pretty well around quicker corners. It was aided by the (also optional) four wheel steering, which gives the rear wheels five degrees of lock opposite to the fronts at speeds up to 37mph and two degrees in the same direction as the pointy end above 37mph. This means that low speed cornering is more direct, and high speed cornering offers more stability. It works well and lets the driver go a little quicker than they maybe ought to on fun, challenging roads. Combine that with the latest version of the quattro all wheel drive system, and you’ll have to work pretty hard to get it out of shape.

The air suspension, despite being decent on the move at speed, doesn’t like a large wheel/bumpy road combo. Smaller wheels may not look good but they’ll make your ride much smoother.

Drivers have the option to change the character of the car depending on their mood as well. Comfort is, well, comfortable, Auto adapts the car to whatever it’s up to at any given moment, Efficiency dulls the controls to keep things as green as possible, Individual allows the driver to choose how they like their car (steering set up, gearbox ferocity, etc), and Dynamic sets it up to go fast.

Audi’s ‘progressive steering’ comes as standard on all models but leaves much to be desired. In theory its ability to deliver progressively more aggressive steering response as you turn the wheel should be a good thing, and it works well in town at low speed since you don't have to put much steering input in to make a tight corner, but when you’re out in the open it doesn’t half distance the driver from the wheels. In Comfort mode it’s set to ‘as light as a feather’ mode as well – not a great thing. Dynamic’s weightier set up is far more satisfying.

The petrol car comes with a seven-speed ‘S Tronic’ gearbox (a jazzy way of saying dual clutch auto) and it works as well as an Audi DCT would. It’s slick and smart, changing gear without fuss or the driver even noticing.

Braking is taken care of with a beefy set of discs, the pedal doesn’t require too much pressure to get it to do its thing, though it could offer a touch more feedback to be particularly engaging.

In keeping with the times, every Audi A7 will come ‘electrified’. This doesn’t mean it’s an all-electric mega car, but it does mean each car gets a 48V mild hybrid system, essentially using regenerated energy to give the car an electric boost and save fuel. The 48V system allows the car to coast at speeds of 34-99mph to save some motion lotion, and it even lets the start/stop function work from 13mph for improved efficiency. Much like the rest of the car’s functions if you know it’s doing something you’re either a superhuman or something’s broken.

Oh, and Audi’s autonomous functions are on the way. But they’ll only be available when it’s legal for the car to have them active. For now users will have the enjoy a blanking plate on the ‘drive your own damn self then’ button slot, although between advanced adaptive cruise control, lane-keep assist and a host of other safety aids, it's hardly a chore to steer the A7.

Do you look for ultimate driving enjoyment? Do you crave a sonorous soundtrack and that odd electricy feeling you get when you have a really good drive? Then you won’t want the new A7. You’ll be best waiting for the S7, or more likely, RS 7 with a big engine and sporty bits.

The issue here isn’t that it’s bad to drive at all; it’s incredibly good at doing what it’s supposed to do and it does so with no fuss at all. What it does do better than most is look and feel brilliant. This is a car for people who want their transport to be an extension of their wardrobe, a point of style, and a reflection of who they are – smart, sensible, and able to go about their day while making a minimum of fuss while looking a damn sight better than the next fool.

It feels oddly like a new iPhone in that it has many more functions than the last one and many people will clamour to get it, but how many will cherish it forever and how many will dump it for a shinier one when their contract is up? Still, at least a used one will do all the flashy stuff and go for a song.