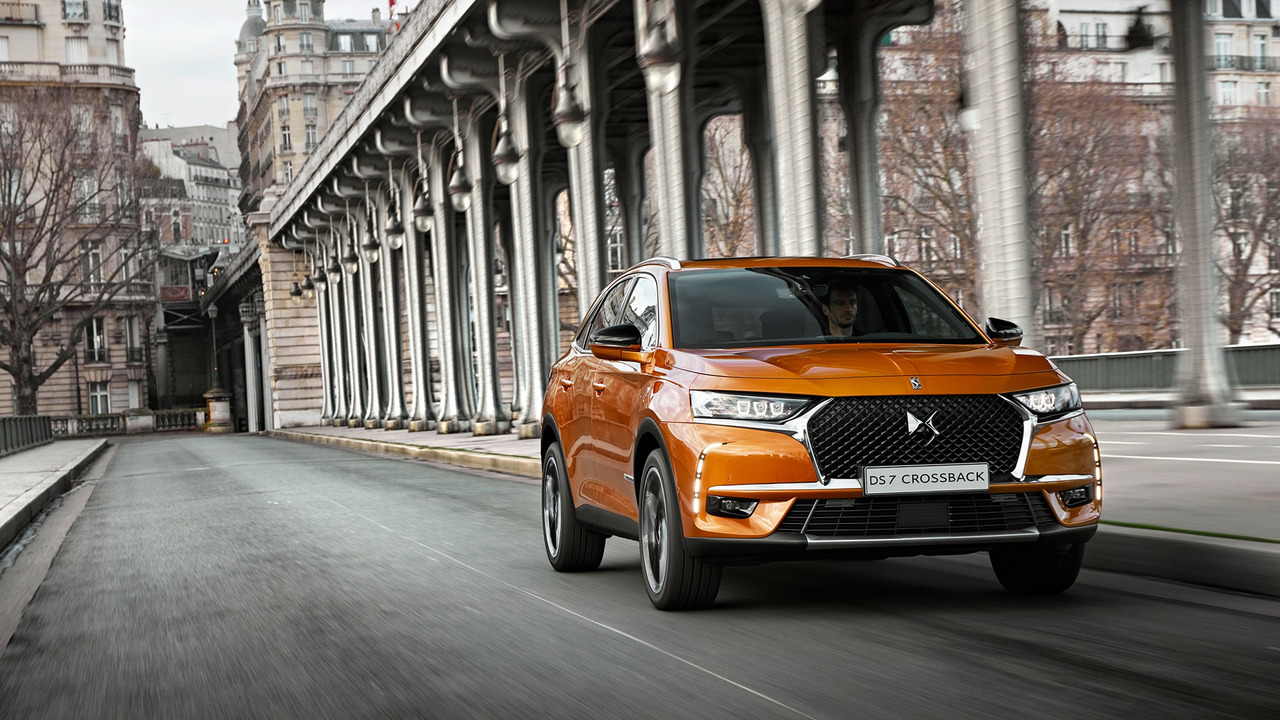 DS has made leaps with the DS 7 Crossback - a car that has genuine style lustre and appeal despite its many and varied rivals.

“The problem with the Range Rover Evoque, you see, is that it’s so popular that people stop looking at you.”

So said the chap from DS, and we can see his point. Being too common isn't likely to be an issue for this, though - the new DS 7 Crossback. It's the French brand’s latest model, and the first to showcase a new design language that’ll characterise the imminent DS model boom.

But then again the DS 7 Crossback has a lot to prove. It’s actually bigger than the Evoque, and - with two diesels and a petrol currently on offer - is priced from under £30k to around £43k. That means it’s competing with everything from the aforementioned Range Rover Evoque and small premium SUVs like the new Volvo XC40, right up to bigger stuff like the Audi Q5, BMW X3 and even slightly less obvious options like a full bells-and-whistles Skoda Kodiaq or VW Tiguan.

DS wanted to create something that’d turn heads, and the DS 7 Crossback does that – to the these eyes, at least – in all the right ways. There’s something appealingly butch and purposeful about the front end of the car, but it still works surprisingly well with the swoopy, tapering rear end and its squinty but pretty, 3D-effect LED rear lights.

The interior aesthetics work, too, even if they do risk edging into the ‘too fussy’ order of cabin design. The switches that flank the gearlever look to be taken straight from a concept car, and neat design touches like the clock that swivels up when you turn the car on, the structural-looking seats with their diamond-stitched pattern, the raised spine bisecting driver and passenger, and the textural combination of materials all combine to make it feel appreciably cocooning and posh. The 12.3-inch touchscreen is a great addition on all but base-spec cars, too, even if the touch-sensitive shortcut buttons underlining it are very fiddly.

For all the design goodness of the interior, tiny details like the slightly cheap-feeling start-stop button, a questionable fit and finish in some parts, and awkward ergonomics in others (it'll be years before you get used to the window buttons being under your left hand, next to the gearstick) do let the whole effect down. An Audi or BMW has a more solid-feeling interior, and also vastly better visibility to the rear three-quarters.

Still, credit to DS for having the guts to make such a strong statement, and while it’s not flawless in its execution, the DS 7's cabin does feel special and somewhat ‘boutique’ in a way that no other mainstream rival does. Volvo probably gets closest.

The DS 7 Crossback is also impressively roomy in the back – there’s loads of legroom and headroom, and if you go for one of top two trim levels you even get electrically-adjustable reclining backrests. Very fancy.

The boot is a good size - usefully bigger than that in a Range Rover Evoque - but it's got an inconveniently high load lip, so if you’ve got multiple buggies, a surfboard, an Ikea obsession, or any of those bulky lifestyle things that often demand an SUV on the driveway, be warned that outright practicality isn’t the DS’ strongest point.

The DS 7 Crossback is offered with a 2.0-litre petrol, but we only drove the diesel options; A 1.5-litre BlueHDi 130 diesel offered only with a manual gearbox, and a 2.0-litre fitted with an eight-speed automatic. All DS 7s are front-wheel drive. No four-wheel drive here (until a plug-in hybrid arrives in 2019, at least), so don’t go looking for Land Rover-like off-road prowess.

The 2.0-litre BlueHDi 180 is expected to be the biggest seller, and it’s a decent powertrain with plenty of oomph, fair refinement and an auto’ box that is generally doing what you want it to do, when you want it to do it. It works perfectly at a steady canter on the open road or muddling through town, and has more than enough muscle to dispatch the odd overtaking manoeuvre with ease. It’s not as refined or quite as slick as the powertrains in an Audi Q5 or BMW X3, but it’s more than good enough to satisfy.

What’s not so satisfying is the ride comfort. Opt for the BlueHDi 180 and you get something called ‘DS Active Scan Suspenion’ as standard. This is a camera-based system that reads the road ahead and tells the adaptive suspension what to do in order to smooth out the ride as much as possible, rather like the new Audi A8 and Mercedes S-Class can do.

The problem is that the DS 7's system doesn’t work very well on UK roads, so on the 20-inch wheels of our test car it brings very wallowy, heavy body movement that has your head wobbling about on your neck over bumpy roads, even though it simultaneously thumps and shudders over potholes. And if you stiffen up the suspension via the drive modes, the body control improves but the ride becomes more crashy and unsettled.

In fact, the BlueHDi 130 we drove was a vast improvement because it came on 18-inch wheels (the smallest you can get on the DS 7 Crossback). It's still a bit firm and lumpy at times, but the body control is fine and the ride comfort much easier to live with, if still a touch choppy and prone to setting the traction control light flashing if you hit a bump mid-corner. The DS is no Q5 or X3, whatever powertrain and wheel size you go for.

The smaller diesel engine is very much up to the job of towing the DS 7 about. It's quiet and pokey enough, while a nicely-placed gear-stick and well-sorted pedal responses make it easy to drive smoothly, so actually if you can tolerate a manual gearbox this is a very decent thing. If not, go for the entry-level trim in the DS 7 Crossback and you can spec a car with the BlueHDi 180 auto’ drivetrain, with the standard, passive (and better) suspension and 18-inch alloys, which’ll be the best option dynamically.

Then again, you’ll all want a higher trim level, because you have to in order to get the big 12.3in touchscreen and leather upholstery, which may well matter more to the average DS 7 buyer than the rather shonky ride comfort and body control.

It’s a tricky one to justify. While the DS 7 Crossback does have an appealing design flair and eccentricity, a roomy cabin and decent standard equipment levels at the price, it’s also not as good to drive, nor as practical, nor even as efficient as some key rivals which'll make it a touch more expensive for company car users. Mind you, monthly finance costs and leasing deals are yet to be confirmed, and could yet make this a more competitive prospect.

Ultimately, it’s easy to see why somebody who’s after a fashionable SUV might settle for the intriguing Gallic swagger of the DS, but with a seemingly endless array of rivals that offer more fun, more comfort, more versatility, more efficiency and in some cases better value, that style is really the only reason you would.