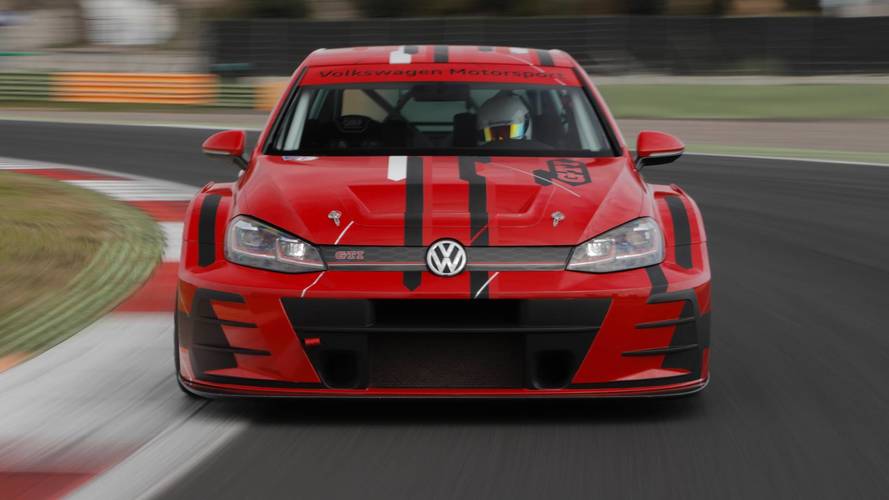 Turns out there really is a Golf for everybody. Even racing drivers... Motor1.com is first UK title to drive it.

Welcome to the world of Touring Car Racing (TCR). The global race series was established in 2015 and, like Formula E, is rapidly becoming recognised as one of the most relevant with 12 TCR championships throughout the world plus TCR-specific classes in endurance races such as the Nürburgring 24 Hours. The main reason for this success? Cost. TCR cars use the same engine and basic chassis architecture as the production cars on which they’re based, and we’re not talking about Ferraris and Lamborghinis here. We’re talking about more humble models like the Audi A3, Honda Civic and Volkswagen Golf.

That’s because to qualify for entry, donor TCR cars must exceed more than 5,000 vehicle sales each year; they must have a maximum engine capacity of 2-litres (although turbocharging is acceptable) and they must weigh less than 1,285kg.

The series also observes what is known as the ‘balance of performance’; a core rule that limits any car’s capability and speed if it’s significantly faster than opponents. Not only does this help keep the racing close and development budgets low, it enables these race cars to have longevity beyond one season and remain competitive in a broad range of disciplines from sprint races to endurance runs.

The Volkswagen Golf GTI TCR is the model that won the TCR series in 2017 and, in keeping with the road car changes for 2018, has been updated for the new season. As the regulations dictate, it takes a run-of-the-mill GTI – if you could ever call this car run-of-the-mill – and a team of Volkswagen’s motorsport engineers to go to town with lump hammers, blow torches and magic.

Perhaps not, but the conversion is still remarkably transformative.  Gone are the seats, the air conditioning and audio systems, the doorcards, roof lining, sound proofing, even the beautifully damped glovebox to create a cabin that is emptier than Joey Essex’s skull. In comes an FIA-approved roll cage with steel piping as thick as your arm, a pair of bucket seats with four-point racing harness, a tiny digital dash and new steering wheel with controls for the engine start, team comms, electric fan and drink. The TCR also comes fitted with air jacks, to enable faster pit stops, plus a choice of gearbox: a seven-speed dual clutch transmission (DSG) that can be ordered on the regular Golf GTI, or a pricier, race spec sequential transmission.

Despite the crash diet, the GTI TCR is also half a metre wider than the road legal GTI, sporting wider tracks plus suitably aggressive wings and splitters to emphasis the TCR’s renewed rawness and drama. Further elements to the suspension, exhaust and the engine’s breathing and cooling have all been altered or are bespoke.

From the moment you snag your foot on the criss-cross rollcage, or bang your helmeted head onto the door frame as you’re free-falling, arse first, into a bucket seat that appears attached to the floor, you’re in no doubt this is a senior level racing car. The four-point harnesses require fitment from a third party, presumably a member of your newly formed racing team, so choose wisely. The person who secured my belts seemed to push my chest cavity so far into the seat, that I felt like my collarbones had snapped and I was experiencing negative G in the pit lane.

Once consumed by the race seat – enjoyable if you like a spot of light masochism – you have a front row seat to the exposed chassis welds, the rudimentary buttons for the fuel pump and a long lever that looks like it has been borrowed from a JCB digger. That’s the handbrake, which is required for full bore standing starts. The view to the sides is more heavily restricted by the wraparound head restraint of the race seat, which made me feel like I’d been reincarnated as a shire horse. By this stage, you can probably gather that I’m not a racing driver or possess a racing licence…

Fortunately, Volkswagen acknowledges that plenty of its wealthy customers are first timers, too, and makes the introduction into racing as comfortable, effortless and reliable as its road cars. I’m in the DSG-equipped TCR, which is an easier gearbox to operate than the sequential transmission, reducing the risk of missing shifts or kangarooing off the start line. There’s more than enough for beginners to worry about here: no traction control, no ABS, no safety net. Stamp too hard on those brakes when the tyres are cold, and you’ll pirouette into oncoming traffic quicker than Craig Revel Horwood can admonish you with a no star rating.

The Golf GTI TCR may ‘only’ have 345bhp, but the figures don’t articulate how intimately brutal the entire driving experience is. The response to each prod of the pedal or tweak of the steering wheel is instant, like all control has been given back to the driver. The chassis is stiff, the power is easily capable of overwhelming the front tyres (if you have the stomp of an elephant), the rear tyres will misbehave if they’re not warm and the car won’t shift gears if you don’t. A benign front-wheel drive car this isn’t.

The brake pedal has been re-positioned for left-foot dexterity and, initially at least, feels unnaturally heavy because it lacks servo assistance. The knowledge that there’s no ABS also makes you more reluctant to give the pedal a more serious jab, but as you build confidence, you become more accurate about how hard you can bite.

The standard GTI’s engine isn’t particularly tuneful and this engine brays with similarly few harmonics, but it sounds anarchic and industrial from the driver’s seat, the 6,200rpm rev limiter booming in the echo chamber. It’s a hugely absorbing and rewarding driving experience, that enthrals and rewards the harder you push.

The TCR series may be one of the more affordable racing programmes, and the pedigree of the GTI TCR clearly makes it the best model to launch a title challenge, especially with such bomb-proof implacability.

That said, racing still requires huge commitment. Volkswagen estimates that you’d have to budget between £132,000 - 160,000 for a six-race series, which includes the car, the team support, transport and parts. It’s punchy but based on our experience, momentarily living in that parallel universe, experiencing what life must be like to race cars around the world, it’s also priceless.